Michael L. Fennell says he has spent a good portion of his 70 years gambling, so he knows the difference between a long shot and a sure bet. And he admits his decision to step inside a casino during a global pandemic was a bit of a gamble.

“Everything we do now is a gamble,” he said after stepping away from a slot machine at Morongo Casino Resort and Spa for a cigarette break. “We’re going through rough times now.”

But, he added “it feels like it’s getting back to normal.”

Morongo’s two casinos, hard by Interstate 10 about 30 minutes outside of Palm Springs, were among six tribal casinos in Riverside and San Bernardino counties that partially reopened Friday after a two-month shutdown caused by the spread of COVID-19.

Five others reopened this week in San Diego County, including Harrah’s Resort Southern California in Valley Center. At least four more tribal casinos will be back online next week. 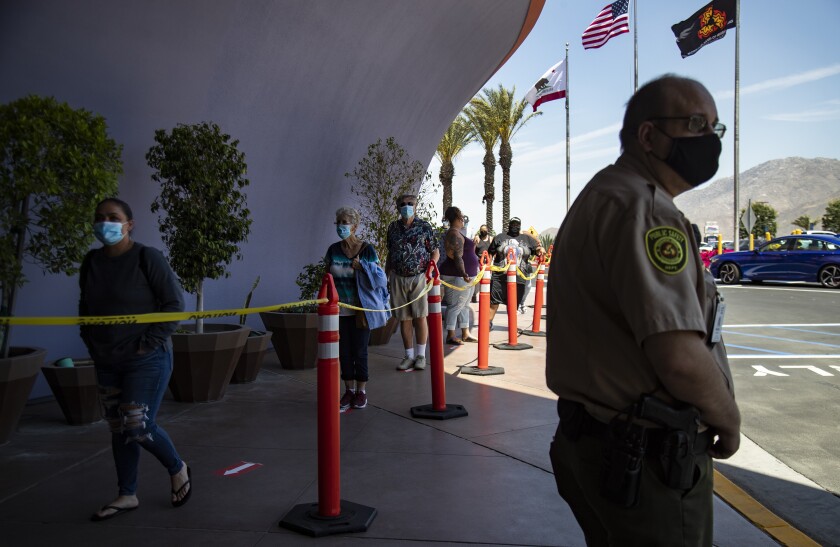 Crowds line up to enter Morongo Casino in Cabazon, Friday afternoon. Patrons are required to wear masks and to have their temperature taken upon entering. The casino reached full capacity within three hours of opening.

Federal law allows tribes to run casinos with sovereignty, limiting the ability of the state or other local authorities to dictate how they operate. Nevertheless, most shut down voluntarily in mid-March, days before Gov. Gavin Newsom issued his stay-at-home order.

With the governor now taking tentative measures to reopen California, the casinos are out in front again — this time discarding Newsom’s warnings that the state may still not be safe.

“It was a tough decision to open,” said Jeff L. Grubbe, tribal chairman for the Agua Caliente Band of Cahuilla Indians, which on Friday reopened casinos in Rancho Mirage and Palm Springs. “Ultimately, everyone wanted to make sure that as tribes open, it wasn’t business as usual. The way we are going to open is going to look much different than when we closed.”

That means all guests and employees at the Agua Caliente properties had their temperatures checked before entering, face coverings were mandatory, and smoking was prohibited. To ensure social distancing, Grubbe said, capacity was limited to about 1,000 people in the 45,000-square-foot Rancho Mirage casino and 700 in the smaller Palm Springs one, about half of pre-COVID numbers.

“It’s costing a ton of money for some of these measures, and it’s worth it, because you can’t put a price on someone getting sick,” Grubbe said.

Despite those measures — or perhaps because of them — a couple of hundred guests had already filed into the Rancho Mirage casino by late morning Friday, about two hours after the doors opened for the first time since March 17.

Convincing some of the employees to come back was a little tougher, Grubbe said.

For many of the 3,000 people who are either members of the tribe or are on its payroll, reopening the casino meant reopening a vital financial lifeline. Although California is home to 109 federally recognized tribes, many are small, which pushed them to the back of the line when it came to accessing the $8 billion in financial assistance Congress allocated for tribal governments under the CARES Act.

“So we kind of said, look, we need to do what’s best for us, for our people, for our employees and kind of take control of our destiny,” Grubbe said. “Everything seemed to be getting better as far as the [COVID-19] cases and the deaths. And if you open up slowly — don’t go full steam ahead, but with all these safety precautions — the time’s right.” 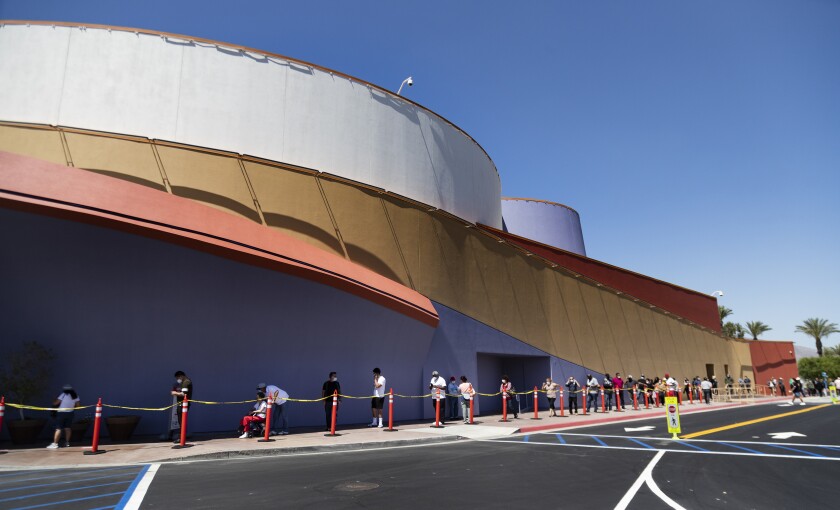 The casinos are hedging their bets, though, with Morongo’s two properties also requiring guests and employees to undergo temperature checks and wear face coverings. Protective shields were installed between slot machines and at gaming tables, said Simon Farmer, executive director of marketing for Morongo.

“It’s honestly up to us to show everybody that we can operate safely and comfortably,” Farmer said. “We understand that certain guests may be a little bit more apprehensive to come back to a casino.”

Whether those measures were being strictly followed was uncertain, since reporters were not allowed inside.

“We’re all a little worried,” said Jose Garcia of Pasadena. “It’s our health.”

Still, he lined up to get in the casino, figuring it was a chance worth taking.

Morongo said it was limiting capacity on its main casino floor — at 148,000 square feet, among the largest in California — but declined to say what the new capacity was. In any case, that number was reached by 2:30 p.m. Friday, about three hours after opening, leaving more than a hundred people standing in line outside in 90-degree temperatures.

Southern California’s tribal casinos aren’t the first to resume business. At least eight states — Idaho, Washington and Arizona among them — have seen some tribal properties reopen this month, while commercial casinos have reopened in South Dakota, Louisiana, Arkansas and Mississippi.

Las Vegas casinos, which remained closed under Phase 1 of Nevada Gov. Steve Sisolak’s “Roadmap to Recovery,” could learn more about their fate Tuesday, when the state gaming board hears from six health and safety experts. Several Las Vegas casino resorts have begun accepting room reservations for stays beginning next weekend.

“We’ve absolutely been monitoring the impact in those areas and learning from our counterparts,” Farmer said. “Just reinforcing the steps that we’ve been taking and thereby reinforcing the decision that we’re making.”

For the Agua Caliente Band of Cahuilla Indians, the decision to reopen has proved to be a good one, Grubbe said.

“Being limited to 50% capacity, we know we’re not going to break any records,” he said. “But we’re going to have some revenue coming in, and people are going to start getting paychecks again. People want to go somewhere; they want to do something. And we want to provide them a safe, clean environment to do it.

“So as long as we have people in there, anything’s better than [being] shut down.”

Werner goes to Chelsea: Liverpool clearly explained the refusal to Klopp, and Granovskaya pulled off the transfer online
Toni Kroos: in Spain, when I come to the meeting three minutes before the start, I will be the first, in Germany-the last
The homes of Benfica players were threatened after the attack on the club bus
Have you seen the Loco gun? The ball comes out of it with the same sound as when you hit it, but there is no impact! How so?
Chelsea have agreed to transfer Werner for 60 million euros
Ronaldo dressed up as Aladdin, Georgina as a Power Ranger for the children's birthday
During a 6-hour shift, you can't drink, eat, or go to the toilet. Two monologues from the RPL about doctors who are fighting the virus
Source https://www.latimes.com/california/story/2020-05-23/a-big-gamble-across-southern-california-casinos-reopen-as-stay-at-home-restrictions-ease