Belarus protesters claim they were tortured for decrying election

Moscow — Authorities in Belarus have released thousands of people detained during unprecedented nationwide protests against long-time President Alexander Lukashenko. The government appeared eager to calm the situation, but as freed protesters' relayed accounts of horrific treatment in detention, the the demonstrations continued for a sixth day on Friday

At least two protesters died and authorities arrested about 6,700 people during a violent police crackdown on the demonstrations earlier this week.

The unrest was sparked by Lukashenko's declared landslide victory in a Sunday presidential election. Many in Belarus, along with a number of foreign governments, believe the vote in the tiny country, often referred to as "Europe's last dictatorship," was rigged.

Secretary of State Mike Pompeo told Radio Free Europe earlier this week that the U.S. was "incredibly troubled by the election and deeply disappointed that it wasn't more free and more fair." He said the U.S. would work with its European partners on a response, but indicated that expected fuel shipments to Belarus could be affected.

On Thursday night and early Friday morning, dozens of people walked out of a detention center outside the capital of Minsk. They were greeted by a large crowd of people hoping to find friends and loved ones who had vanished for days without a trace.

But many of those arrested during the protests remained missing Friday, and family members were getting increasingly desperate. Some showed photos of their missing loved ones to the released detainees on their cell phones Thursday night outside the detention center, hoping for any information.

Videos from outside the detention center showed released protesters sharing accounts of alleged beatings and mistreatment in what they described as overcrowded cells. Some said they were forced to stand or lie face-down on concrete floors for hours without much food or water. 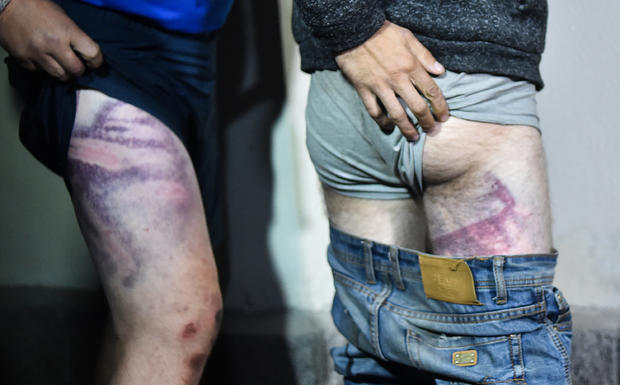 People detained during recent rallies of opposition supporters, who accuse strongman Alexander Lukashenko of falsifying the polls in the presidential election, show bruises they say were sustained during beatings as they leave the Okrestina prison in Minsk, August 14, 2020. SERGEI GAPON/AFP/Getty

"There were beatings outside and in the cells," one woman said in a video posted by independent Belarusian news outlet Tut.by. "There was a sea of blood."

Independent online Russian news outlet Znak.com released a report Thursday by one of its journalists, Nikita Telizhenko, who described in chilling detail his 16 hours in detention.

"Blows, screams, cries could be heard from everywhere," Telizhenko wrote.

He was freed along with another reporter who had been covering the protests, from Russia's state-owned RIA Novosti news agency, after the Russian Embassy in Minsk intervened.

Belarus' Interior Minister Yuri Karayev apologized on Thursday for "random people at the protests" being injured, and for violence against journalists.

Another senior official, Natalya Kochanova, also sought to quell the unrest, releasing a televised statement on behalf of Lukashenko saying the president heard the voices of the labor unions backing the protests and had ordered an investigation into the arrests.

While the number of people taking to the streets has fallen over the course of the week, workers from some major state-run industries have joined the protests, mounting further pressure on Lukashenko amid calls for an election do-over. 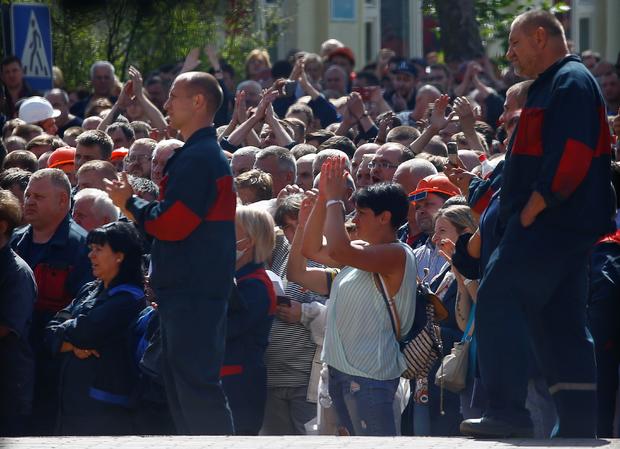 Employees of the state-run Minsk Automobile Plant (MAZ) are seen through an entrance checkpoint during a protest against presidential election results and to demand a new election, in Minsk, Belarus, August 14, 2020. VASILY FEDOSENKO/REUTERS

About a dozen journalists have also announced their resignations from state-controlled media in protest over the government's actions.

Peaceful protesters formed new human "chains of solidarity" in Minsk early Friday morning. Dozens of women, many wearing white or holding flowers, lined up along the city roads. Photos posted online showed posters reading: "We are for peace" and "Stop beating our men."

Lukashenko's government has been under pressure from the European Union over its human rights record for years, but in 2016 the EU partially lifted sanctions against Minsk. This week's crackdown on the protesters has seen EU officials talk about rolling those sanctions back.

Russia, an ally to Lukashenko, is interested in forging even closer political ties with Belarus. Moscow has voiced concern over what it described vaguely as attempts by external forces to destabilize the situation in the small neighboring state. 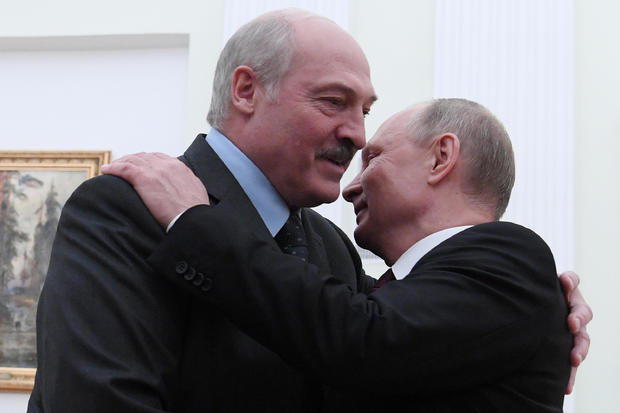 Russian President Vladimir Putin, right, welcomes his Belarus counterpart Alexander Lukashenko to a meeting at the Kremlin, in Moscow, on December 29, 2018.  KIRILL KUDRYAVTSEV/AFP/Getty

Lukashenko, 65, has ruled his country with an iron fist for 26 years, going to considerable lengths to stifle opposition.

Svetlana Tikhanovskaya, a 37-year-old former English teacher without any prior political experience, emerged as his main challenger in the Sunday vote after her husband, an opposition blogger who had hoped to run for president, was arrested in May.

Tikhanovskaya managed to unite fractured opposition groups and drew tens of thousands to her campaign rallies.

Her supporters believe she would have won Sunday's election if it had been fair, but the official results gave her just 10% of the votes. Tikhanovskaya left Belarus under pressure and is now taking refuge in neighboring Lithuania.

In a video posted online Friday, Tsikhanouskaya, asked her supporters to support an official investigation into the election. She also called for an end to the violence, and urged local leaders to help coordinate continued peaceful demonstrations.

It's time to learn the names of new Borussia heroes. Now there are 17-year-old boys making goals
Paulo Fonseca: it's Important to bring Smalling back to Roma. We have only 3 Central defenders
Arteta about 2:1 with West ham: Arsenal made life difficult for themselves with losses, but they fought and believed in victory
Palace midfielder Townsend: Could have beaten Manchester United with a bigger difference. We had moments
Philippe Coutinho: I am motivated and I want to work hard to make everything work out well on the pitch
Torres on Chelsea: I Thought I could remain a top player, but I was unstable. Although there were enough successes
Neville on the broken penalty against Manchester United: an Absolute disgrace
Source https://www.cbsnews.com/news/protesters-allege-beatings-and-torture-for-decrying-belarus-election/

Tigers manager Ron Gardenhire retires: ‘I have to take care of myself’

Candace Owens accuses Amazon of damaging her new book: ‘This is unacceptable’

Here's why a Supreme Court battle could benefit the Republicans

Party leaders indicate that if they win the majority, they may retaliate against Republicans by pushing to expand the court

TikTok and WeChat downloads soar ahead of ban

Why the country needs a filled Supreme Court for the 2020 election: Goodwin

Column: No fans could be advantage for Wolff in US Open

Trump Is Riding High. Can He Keep from Blowing It?

US ‘Snaps Back’ UN Sanctions on Iran

The left channels its fury toward McConnell

Hayward returns to Celtics for Game 3 of East finals

How the Supreme Court operates with only 8 justices

US says all UN sanctions on Iran restored, but world yawns

Pogacar as Stunned as Everyone After Shock Tour de France Upset

Stream It Or Skip It: ‘Gemini Man’ On Amazon Prime Video, Where Will Smith Plays A Sniper On The Run From His Younger Self

Wait or nominate? Many voters support doing what is best for their party, but for some, the court fight looms large.

'Blood amber' may be a portal into dinosaur times, but the fossils are an ethical minefield for palaeontologists

Blood amber is a portal into dinosaur times ... and an ethical minefield

Bettman: Next NHL season could start in December or January

Trump on Supreme Court nominee: 'It will be a woman'

US has reimposed UN sanctions on Iran, Pompeo says

'Fill That Seat' Chants Erupt At Trump Rally, A Day After Ginsburg's Death

'Blood amber:' A portal into dinosaur times but an ethical minefield for paleontologists

A Hong Kong teenager's death became a magnet for conspiracies, and exposed deep problems in how the city operates

Mother returns to scene of her son’s death one year later, this time with dancing and prayer: ‘This is not the end of his story’

'Nothing is off the table': Supreme Court fight could reshape the Senate

Despite their posture on Supreme Court confirmations, vulnerable GOP senators see pushing through a nominee as beneficial to their reelection

New on TV this week: 7 movies and shows to watch live