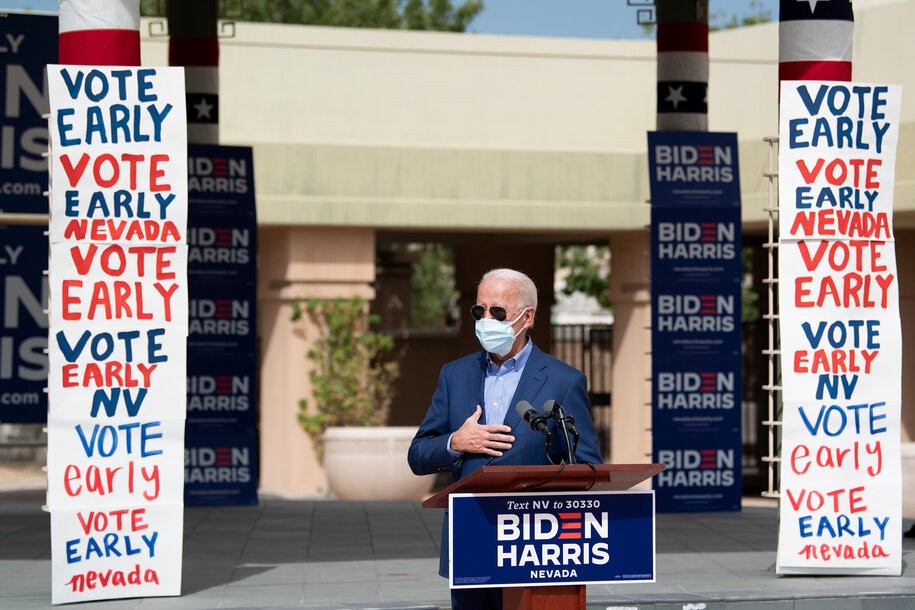 The most important message both presidential candidates are offering&nbsp;in the final days of the election is on coronavirus, and the contrast could not be more stark. On the one hand, you have Donald Trump presiding over superspreader events, mocking mask wearing,&nbsp;and claiming “We’re rounding the turn, regardless,” as coronavirus rates rise across the country and more than 1,000 people died on Wednesday.

On the other hand, you have former Vice President Joe Biden, who acknowledges the seriousness of what we’re up against. “Even if I win, it’s going to take a lot of hard work to end this pandemic,” Biden said in Delaware on Wednesday. “I’m not running on the false promise of being able to end this pandemic by flipping a switch.” Biden is running to do that work, not to bask in the glory of his own lies about rounding the turn.

We have no more time to lose. Millions of Americans have voted, but many millions more still need to vote for Biden-Harris and the Democratic ticket. It's too late to write letters, so the most effective thing you can do right now is phonebank to battleground states. Click to sign up for a shift.

Some people want false promises, of course. They hear Trump say “This election is a choice between a Trump boom and a Biden lockdown” and think he’s offering a real choice and not another lie. But most people know that Trump is the reason COVID-19 has been so devastating in the United States.

The White House&nbsp;has declared&nbsp;that “ending the COVID-19 pandemic” is one of Trump’s achievements—not one of his goals, one of his achievements.&nbsp;Again and again, Trump claims the virus will simply go away—implication being, he doesn’t need to do anything to make that happen.&nbsp;

Biden is telling the truth, even where it’s difficult: It’s a false promise to claim to be able to just end the pandemic. It’s going to be hard work. But it’s vitally important to get to where we can start that hard work.

“You know, our doctors and nurses and our&nbsp;frontline healthcare workers are putting themselves at enormous risk every day. More than 1,000 of them have already died in an attempt to beat back this pandemic and save lives. They deserve to be treated with respect by their president. We can’t afford four more years of a president who’d rather spend his time desperately trying to strip people of their health care than even once bother to put forward a healthcare plan of his own. We can’t afford four more years of Donald Trump.”

Pep on Aguero's reaction to Maradona's death: it's difficult, especially for his son. Sad situation for the family
Pogba and Mctominay will not play with Southampton due to injuries
Jurgen Klopp: Maradona is the best player in my life. Meeting him was like meeting the Pope
Chalhanoglu will move to Manchester United as a free agent in the summer of 2021 (Christian Falk)
Benzema, Carvajal, Ramos and Valverde will not play with Alaves due to injuries
Ronaldo will not play against Benevento. Pirlo gave him a rest
Zidane on Real Madrid's downturns: Stability in football is the hardest thing to achieve. The problem is not in relation
Source https://www.dailykos.com/stories/2020/10/29/1990625/-Biden-hammers-home-his-COVID-19-message-in-the-final-week-before-Election-Day

More than 1.7 million copies of Obama book sold in a week