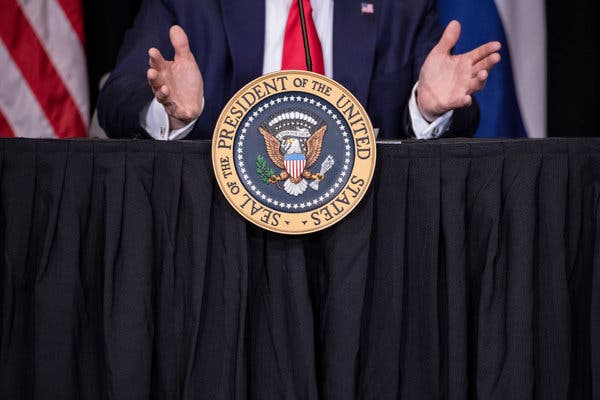 There are 16 weeks to go before the general election between President Trump and his Democratic opponent, Joe Biden.Credit...Samuel Corum for The New York Times

A Senate runoff election in Alabama that is unusually personal for President Trump.

Republican National Convention planning in Florida that is overshadowed by the coronavirus outbreak.

Primary race runoffs in Texas — as well as a new poll showing former Vice President Joseph R. Biden Jr. ahead of Mr. Trump in the state.

And spikes in Covid-19 cases in G.O.P.-led states from southeast to southwest.

Republicans are facing major decisions this week across the Sun Belt as the party tries to chart a course through a political moment defined not just by health and economic crises but also the unsteady and increasingly unpopular leadership of Mr. Trump. The landscape for the president is so tough right now that Democrats are even encouraging Mr. Biden, Mr. Trump’s opponent, to press his advantage and compete aggressively in traditionally Republican states like Georgia and Texas.

With 16 weeks to go until the general election on Nov. 3, The Times is expanding its live coverage of the campaigns for president, House and Senate, and governor, as well as coverage of voters, politics and policy across the nation.

Our reporters will be delivering daily updates, news and analysis on all the major races and political dimensions, including voting rights and mail-in voting, the protests against systemic racism and social injustice, and the repercussions of the virus and the devastated economy on the nation’s politics.

Mr. Trump has endorsed Mr. Tuberville against his one-time ally, Mr. Sessions, who the president came to despise for recusing himself from the investigation into Russian interference in the 2016 election. Most polls in Alabama close at 8 p.m. Eastern on Tuesday.

Texas also has primary runoffs on Tuesday for several key House seats, as well as a Democratic Senate primary runoff between M.J. Hegar and state Senator Royce West; the winner will face Senator John Cornyn in November. In Maine, Democrats will choose a nominee on Tuesday to face Senator Susan Collins, with Sara Gideon, the speaker of the Maine House, widely seen as the likely winner.

In Florida, state officials on Sunday reported the highest single-day total of new coronavirus cases by any state since the start of the pandemic, with more than 15,000 new infections. (New York had recorded the previous high of 12,274 on April 4.) New cases are increasing across the Sun Belt, as this map shows, and Republican governors like Ron DeSantis of Florida and Greg Abbott of Texas face criticism for their decisions to begin reopening their states weeks ago.

As Florida officials grapple with the rise, Republicans in the state and nationally are continuing to plan and raise money for the Republican National Convention set to begin in Jacksonville, Fla., in about six weeks. With some Republican senators and governors have said they do not plan to attend the convention, pressure is bound to increase on Republicans to reconsider elements of the three-day convention or shift gears in light of the health crisis.

MOBILE, Ala. — With just one day remaining before Alabama’s Senate Republican runoff election, Jeff Sessions is making his final appeal to voters, popping by restaurants across Mobile and attempting one last time to distinguish himself from his opponent, Tommy Tuberville.

Mr. Tuberville, meanwhile, will spend little time on the campaign trail on Monday, according to a person familiar his plans, sticking to the lie-low strategy that has helped him maintain a double-digit lead over Mr. Sessions for most of the primary.

Tuesday’s election stands to lay bare the extent to which President Trump has turned Mr. Sessions’s own state against him. Before the Trump era, Mr. Sessions could do virtually no wrong in the eyes of Alabama’s Republicans, winning four Senate elections from 1997 to 2017, in one race without so much as a primary challenger.

But Mr. Trump has never forgiven his former attorney general from recusing himself from the federal investigation into Russia’s influence in the 2016 election, and has made it something of a personal mission to ensure that Mr. Sessions does not return to the Senate.

Accordingly, Mr. Trump has wholeheartedly embraced Mr. Tuberville, a former Auburn University football coach, despite the candidate’s series of stances on issues such as immigration and trade that appear to diverge from the Trump agenda.

And during his last day on the campaign trail, Mr. Sessions will likely highlight this fact above all others, reminding voters of his own long record of supporting Trumpism even in the face of personal insults from Mr. Trump himself.

In other words, as with almost every day of the primary, specific policy proposals will play almost no role, with Mr. Sessions and Mr. Tuberville both trying to frame themselves as the candidate most fully aligned with the president.

Could Texas really be in play for Joseph R. Biden Jr.? It’s a question political observers — and even the Biden campaign — are intensely debating.

On Sunday, a Dallas Morning News poll showed Mr. Biden had the support of 46 percent of the state’s registered voters, compared with 41 percent for President Trump.

Other recent polls have suggested a close race in Texas, but this was the first public survey to show Mr. Biden exceeding the margin of error.

As Mr. Trump’s poll numbers sag, Mr. Biden’s campaign is seriously considering investments in states that just months ago Democrats considered out of reach — the biggest prize being Texas, with its 38 electoral votes.

The state has voted Republican in every presidential election since Jimmy Carter won it in 1976, but Democrats see an opportunity to turn that around, driven by Texas’ growing Hispanic population and increasing frustration with Mr. Trump among independent voters.

In addition to the presidential and Senate races, Texas presents Democrats with numerous realistic opportunities to pick up House seats this year. A strong showing in November could also help Democrats capture a majority in the Texas State House and on the State Supreme Court. Both bodies could play a crucial role in the redistricting battles that are sure to follow the 2020 census.

The Open Society Foundations, the philanthropic group founded by the billionaire George Soros, will announce on Monday that it is investing $220 million in efforts to achieve racial equality in the United States.

The investment, a huge financial undertaking that comes during an extraordinary protest movement, will immediately reshape the landscape of Black political and civil rights organizations and support several of them for years to come.

“There is this call for justice in Black and brown communities, an explosion of not just sympathy but solidarity across the board,” said Patrick Gaspard, the president of Open Society. “So it’s time to double down.”

Of the $220 million, the foundation will invest $150 million in five-year grants for selected groups, including progressive and emerging organizations like the Movement for Black Lives and the Black Voters Matter Fund. The money will also support more established Black political organizations like the Equal Justice Initiative, which was founded by the civil rights lawyer Bryan Stevenson and depicted in the 2019 movie “Just Mercy.”

The Open Society Foundations will invest an additional $70 million in local grants supporting changes to policing and criminal justice. This money will also be used for civic engagement opportunities.

Maurizio Sarri: My future at Juve does not depend on the match against Lyon. Otherwise, the management will present themselves as Amateurs
Norwich refused to sell defender Lewis to Liverpool for 10 million pounds
Maurizio Sarri: Lyon has improved. Juve will have a difficult match
Zinedine Zidane: bale chose not to play, the rest is between us
Varane about the match with Manchester City: Real Madrid likes to fight with the best. We'll have to attack
Maurizio Sarri: Dybala is still in the hands of the medics. Ronaldo is training well
Nicolas Anelka: I didn't like the stardom of Real Madrid. I immediately realized that there would be a feud
Source https://www.nytimes.com/2020/07/13/us/elections/biden-vs-trump.html

Lull yourself to a good night's rest with Audible's Sleep Collection

Stainless Steel Who? We Have Eyes on This Appliance Brand’s New Colors

Brian Hook, US special envoy for Iran, to step down; Elliott Abrams to take post

Sen. Kennedy: What I learned from Sally Yates hearing is that 'she doesn't want to answer the questions'

Singer-Songwriter Lauv on Turning to Music and Coping in Quarantine

Not guilty pleas for 4 indicted in $60M Ohio bribery probe

KT McFarland: What Sally Yates got wrong about my phone call with Flynn

‘I Want to Do What I Can.’ Lili Reinhart on Recognizing Privilege and Making Change

Chants of 'revolution' in Beirut as Macron is mobbed by crowds

Trump "optimistic" about a COVID-19 vaccine near Election Day

Ask a Reporter: Howard Blume and Paloma Esquivel on covering schools during a pandemic

Scientists puzzled after Paraguayan lagoon turns purple on one side, remains blue on other

2020 Atlantic hurricane season has broken records, NOAA now says there may be more storms than names

Bring the Fancy Juice Bar Experience to Your Kitchen With This Juicer, Now on Sale

Dr. Jill Biden tells "CBS Sunday Morning" she will continue to teach if her husband is elected president

‘A League Of Their Own’ Reboot Gets Series Order At Amazon

Fred Fleitz: If Biden skips debates with Trump here's how our enemies will read it

After allegations of abuse, Ferndale's Imperial to reopen with restructured ownership

Hundreds of thousands of New Yorkers still without power after Isaias

Democrats dig in on $600 jobless benefit