Dozens of criminals armed with assault rifles invaded a city in southern Brazil overnight and took control of the streets as they assaulted a local bank.

Video from residents that was broadcast on the Globo television network showed hooded men dressed in black walking the streets of Criciúma in the state of Santa Catarina, and locals being held hostage. Shots rang out across the city of some 220,000 people.

There were at least 30 criminals in 10 cars, Anselmo Cruz, the head of the state police's robbery and kidnapping department, told television network Globo News. They blocked access points to the city to prevent police reinforcements from responding swiftly. 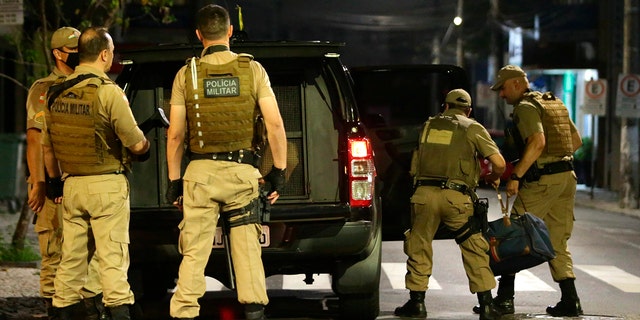 “It was an unprecedented action for the state. There was never anything with this scope, this violence,” Cruz said Tuesday.

The takeover began around midnight and lasted roughly two hours. Images on Globo showed a bank vault with a square-shaped hole in it and a convoy of criminals’ vehicles as they made their escape. Bills were scattered across the ground in one area of the city.

State-run Bank of Brazil said in an emailed statement that its branch in Criciuma will remain closed and that it doesn't provide information regarding the amount of money taken. It didn't respond to an Associated Press request for comment about local media reports the branch was a regional treasury.

The brazen robbery resembles another that took place in July in the city of Botucatu, in Sao Paulo state. There, around 30 armed men blew up a bank branch, took residents hostage, and exchanged gunfire with police officers before making their getaway.

Criciuma's Mayor Clésio Salvaro took to Twitter last night while the terror was still unfolding to warn locals of the “robbery of great proportions, by very well-prepared thieves.”

“As mayor of Criciúma, I ask that you stay home, don’t leave home, exercise all precaution,” Salvaro said in a video he posted just before 2 a.m. local time. “Tell your friends and families. Let the police do their job.”

Two injuries were reported during the robbery.

The Eintracht captain ended his career in the middle of the season for his son. He said goodbye to football by exchanging T-shirts with the referee
Frank Lampard: Leicester are in the RPL championship race. I don't want to say whether Chelsea are involved or not
Mancini on Pirlo: Difficulties at first - it's normal, even if you played at the top level
Phil Neville took over Inter Beckham
Jose Mourinho: You can buy one of the best defenders in Europe for 70 million, or you can take someone who needs development
Ex-Arsenal midfielder Wilshere has signed a contract with Bournemouth
Ole Gunnar Solskjaer: Pogba played superbly against Liverpool. Manchester United manager Ole Gunnar Solskjaer commented on the performance of midfielder Paul Pogba in the match of the 19th round of the Premier League with Liverpool
Source https://www.foxnews.com/world/brazilian-city-seized-by-armed-bandits-bank-looted

Woman ruled dead in 2017 fights to be declared alive

Matt Damon Touches Down In Australia Ahead Of ‘Thor: Love And Thunder’ Role

After five days of internet blackout, Ugandans are back online as Bobi Wine remains under house arrest

California may be the 'model' for Biden administration: Lawrence Jones

Congress gears up for fight over Biden Cabinet nominees

Colombia's 'cocaine hippos' must be culled, scientists say -- but not everyone agrees

Starbucks shut some NYC stores ahead of Inauguration Day

Alex Berenson: Shutdown of Parler is Big Tech's 'most dangerous' move yet

How K'taka Police reunited mother, her 9-month-old on Sankranti; wins over hearts

Yoruba Richen on PBS Documentary ‘How It Feels to Be Free’

Why Introspection Matters During The Pandemic

‘Peaky Blinders’ To End With Now-Filming Season Six; Story Will Continue “In Another Form”

Russia extends Navalny's detention as outcry over his arrest grows

Bacon vs Freud: Who Wins at the Auction Block?

Lockdown lifted at US Capitol Building after brief security scare

Anand Mahindra found his Monday motivation in an auto driver's story, we found ours too

3 Questions And The Emerging Answers About COVID-19 Vaccine Protection

A Theater Serves as a Courthouse, Provoking Drama Offstage

Texas woman arrested in Capitol riot has no regrets, feels like martyr

WHO Chief Accuses Drugmakers Of Prioritizing Profits Above Sick, Elderly

Inside the Complicated, Enthralling Friendship of Lucian Freud and Francis Bacon

Fire near Capitol sets off scramble amid heightened inauguration security

Giuliani Won't Be On Legal Team For President Trump's Impeachment

Parler Back Online After Amazon Suspension

WHO chief rips COVID vaccine inequalities: "It's not right"

Caffeinate with MatchaBar to avoid the dreaded coffee crash

My Friend Is Plotting to Steal My Hot, Charcuterie-Slinging Lover

‘I Let You Down’: Klete Keller’s Path From Olympics to Capitol Riot