Buffalo Bills defensive back Vontae Davis shocked his team and sports fans after he retired during halftime of Sunday's game against the Los Angeles Chargers. "He said he's not coming out. He retired," Bills linebacker Lorenzo Alexander told reporters after his team lost to the Chargers 31-20.

Davis later issued a statement confirming his abrupt decision to retire. "This isn't how I pictured retiring from the NFL," the 10-year veteran said, adding that he meant no disrespect to his teammates and coaches.

Alexander said he was told that Davis made the decision at half-time, when the Bills were trailing the Chargers 28-6. "He didn't say nothing to nobody. "You know as much as I know. I found out going into the second half of the game," he told reporters. "Coming out [they] said he's not coming out, he's retired."

"He said he's not coming out. He retired..."
—Bills LB Lorenzo Alexander pic.twitter.com/ab7wJoyc7f

In February, Davis joined the Bills team after spending six seasons with the Indianapolis Colts. He was drafted by the Miami Dolphins in 2009 and spent three years with the team. He was selected two the Pro Bowl twice during his time with the Colts.

"This was an overwhelming decision, but I'm at peace with myself and my family. I choose to be grateful to God for allowing me to play the game that I have loved as a boy until I turned 30 years old," he said in the statement. "There were roadblocks and pitfalls along the way, but I am grateful to God for all of it because he doesn't promise any of us an easy journey." 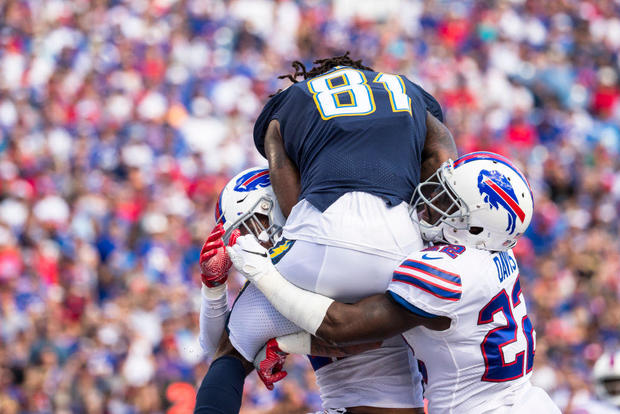 Mike Williams of the Los Angeles Chargers scores a touchdown on Sunday, Sept. 16, 2018.

Inter want to extend Sanchez's lease and are willing to pay extra for him to Manchester United if the clubs play in the Europa League final
Don't talk behind our backs, go out on the field and fight with us. Pep's possible appeal to Jose, Klopp and the world
Robertson Pro 1:2 with Arsenal: the Result is disappointing. But next week, the 30-year wait will end!
Bruno Fernandes: Ronaldo is the most technical player I have seen
Solskjaer on Chelsea: They have 48 hours more rest before the Cup semi-final. It's not fair
Bayer wants about 100 million euros for Havertz. He will not be released until the end of the Europa League draw
Manchester City presented their home form for the 2020/21 season. It has a white pattern
Source https://www.cbsnews.com/news/vontae-davis-retires-today-buffalo-bills-player-leaves-los-angeles-chargers-nfl-game-2018-09-16/

Woman who joined ISIS aged 15 will be allowed home to U.K. to fight for citizenship

Houston coronavirus updates: What you need to know for July 16

Statue of Black U.K. Protester Removed From Plinth in Bristol

Mike Tyson will kick off 'Shark Week' 2020 on Discovery Channel

Will children spread COVID-19 if they go back to school?

ASKfm CEO Janis Grivins: “The Essence of the Product Has to be Simple”

RNC scales back convention in Florida next month

Suspect gets drunk while robbing restaurant, leaves money and alcohol behind

[Update] What Could Nick Cannon's Firing By Viacom’s Mean For 'The Masked Singer'?

PPP data get murky on wrong congress district for 226,000 loans

The world loves the US dollar. Trump and the pandemic could change that

China complains to US ambassador about Trump administration ‘bullying’

Portland protester charged for attacking US Marshal with hammer

Racing for a remedy: Unraveling the deadly new coronavirus

Andean condors can fly more than 100 miles without flapping their wings once, researchers reveal

One woman, four men and weeks in Norway's Arctic ice

What it's like sailing to the top of the Earth

Woman wants half of $100G raised for Starbucks barista, claims she was discriminated against

Russian cyber actors are targeting organizations involved in coronavirus vaccine development, according to a new warning by the three nations