Dr. Jon LaPook on the importance of face masks

The wife of a French bus driver who was beaten to death after he asked four passengers to wear face masks aboard his vehicle called Saturday for "exemplary punishment" for his killers.

The assault on Philippe Monguillot has scandalized France. President Emmanuel Macron on Saturday dispatched the interior minister to meet the driver's widow after his death was announced Friday. He had been hospitalized in critical condition after the July 5 attack. 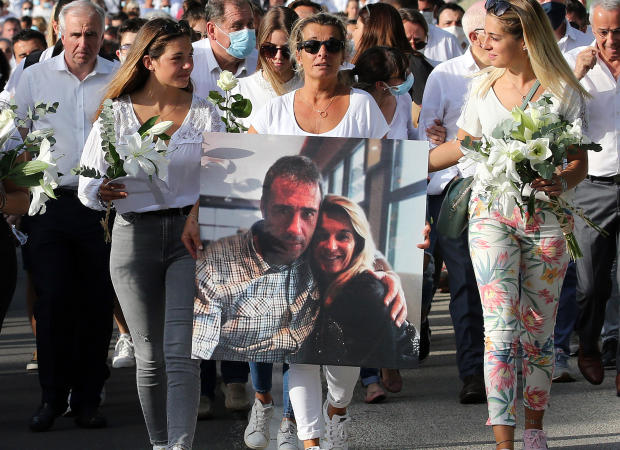 This July 8, 2020 file photo shows Veronique Monguillot, wife of Philippe Monguillot, a bus driver who was attacked in Bayonne, holding a photo of her with her husband, during a protest march in Bayonne, southwestern France. Bob Edme / AP

Veronique Monguillot said she told the minister, Gerald Darmanin, that she and their three daughters were "destroyed" by the attack on her husband at a bus stop in Bayonne, southwest France.

"We must bang a fist on the table, so this never happens again," she said. "It's barbaric, not normal. We must stop this massacre."

The Bayonne prosecutor said Monguillot was assaulted after he asked four passengers on his No. 810 bus to wear face masks, which are required aboard French public transport because of the coronavirus pandemic. The driver was insulted, pushed off the bus and violently beaten and kicked in the head, the prosecutor said.

Four people are in custody.

"This bus driver was only doing his job," Darmanin said. "He left his home in the morning and did not come back, leaving a widow and three orphan girls. It is an absolutely odious act."

France has battled hard to tame its coronavirus outbreak, which saw over 208,000 confirmed infections and over 30,000 virus-related deaths, according to a tally by Johns Hopkins University. Experts say the true toll is higher, due to testing limitations and missed mild cases.

Raheem sterling: Looking for tickets to Lisbon. From the 10th to the 24th. Retweet if you can help
Pep Guardiola: Gabriel is the best player of matches with Real Madrid
Three heroes of Lyon in the match with Juve – among them the defender, whom the fans drove in the fall
Manchester City and Lyon will meet in the 1/4 final of the Champions League on August 15 at Jose Alvalade
Photo of Pep and Zizou – just a gift for Showsport users
Ronaldo was eliminated so early from the Champions League for the first time in 10 years, although he tried very hard – in the playoffs for Juve, only he scores
Rudi Garcia: to Pass Juventus is a feat. The most pleasant defeat in my career
Source https://www.cbsnews.com/news/bus-driver-beaten-to-death-passengers-face-masks-france/

Greek Island Locks Down as COVID-19 Infections Soar Across Country

Remains of 7 Marines, 1 sailor recovered off California after training mishap

Trout homers again on birthday, but Angels fall to Rangers

The Latest: India reports 933 deaths as cases near 2.1M

Haotong Li is surprise PGA Championship leader after scorching round

Bill Maher Frets About The Clintons, The Military & The Mail; Begs Chris Evans To Run For Office

Recent surge in Virginia COVID-19 numbers due to ‘data backlog’

Trump steps back from involving himself in Libya's bloody civil war

Indians hitting coach Van Burkleo opts out due to COVID-19

Portland protests persist as some bring flashes of violence

Koepka’s hip, not the knee, causing a problem at the PGA

Wayne Fontana Dies: ’60s Pop Star With The Mindbenders Was 74

All About the Chips: Taiwan is Next Battleground for Trade Fight

The Right Needs Their Own Boycott: Social Media

This Day in History: August 8

Detroit Tigers break through, 17-13, in 11 innings thanks to Jeimer Candelario vs. Pirates

Michigan county official resigns after doubling down on N-word, says he's not racist

California colleges can reopen with a ton of restrictions, limited dorms, online classes

Iran asks UN to hold US accountable for plane interception

Kelly Rowland slams cancel culture: ‘Try to remember not to judge others’

Wilson takes over down stretch dealing Aces past Sparks

Li at his best and builds early lead at PGA Championship

Plane skids off runway in India; 17 killed, including pilots

Matt Schlapp, Charlie Hurt ask, 'Who's going to be in charge of the White House' if Biden falters

Shelby Township to have first Dem on fall ballot since 2012