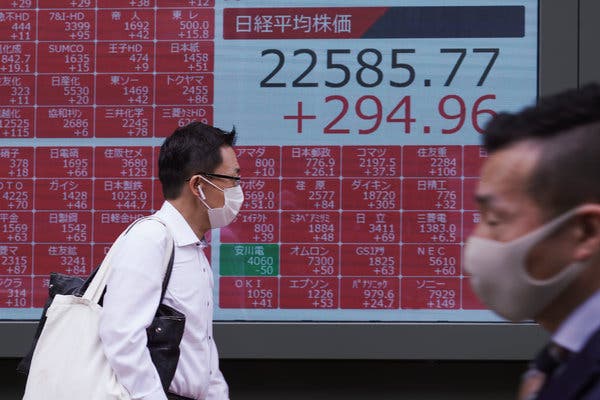 An electronic stock board showing Japan's Nikkei 225 in Tokyo on Monday. Asian shares rose Monday, cheered by recent upbeat projections on a global rebound tempered with worries about disappointment that could follow.Credit...Eugene Hoshiko/Associated Press

Stocks started the week on a positive note, as investors looked ahead to corporate earnings reports for the latest clues on how businesses are coping through the pandemic.

European markets were about 1 percent higher in midmorning trading, following an Asian trading session where indexes finished were broadly higher. Wall Street futures were pointing to a upswing when trading begins in New York.

In other markets, oil futures were lower, beginning a week when major producers are meeting to consider market trends; OPEC+, the group that includes Saudi Arabia and Russia, is likely to increase their output in August, as coronavirus lockdowns ease and demand begins to rise again.

U.S. Treasuries were higher, and gold gained about 0.6 percent.

Major banks in the United States will begin reporting their second quarter earnings this week, with JPMorgan, Citigroup and Wells Fargo kicking it off on Monday. A range of other companies will also report later in the week, including Netflix and Delta Air Lines. Many companies, rocked by uncertainties caused by the spread of the coronavirus, have stopped giving guidance on profit projections through the year, so traders will be looking especially closely at the quarterly numbers.

In many parts of the world the spread of the virus is unrelenting. Florida on Sunday reported the highest single-day total of new coronavirus cases by any state since the start of the pandemic, with more than 15,000 infections. The economic crisis is prompting a growing coalition in the United States — including Democrats and Republicans, labor and business — to push for a new training effort to upgrade the skills of American workers, creating what one proponent called “a Marshall Plan for ourselves.” 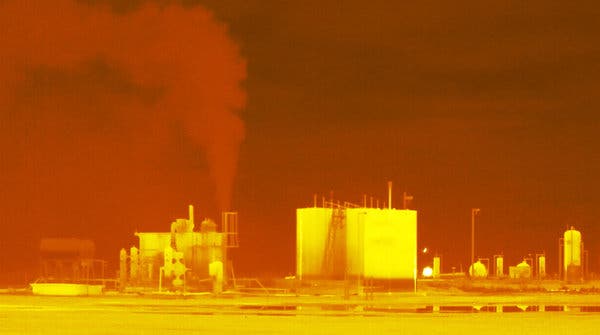 An infrared image last year of an MDC Energy well pad leaking methane (which is invisible to the naked eye). This month, the site has continued to leak gases, government violations show.Credit...Jonah Kessel/The New York Times

The plunge in oil prices caused by the coronavirus pandemic is forcing American oil and gas companies into bankruptcy. That is bad news for the environment — and for employees of those companies who were injured on the job.

Some companies are claiming in court filings that they are so broke they can no longer afford to clean up the environmental messes they caused while in operation: methane leaks, oil spills and other chemical contaminations. At least one bankrupt firm, Chesapeake Energy, also said it could no longer pay to engage in a lawsuit brought by injured employees.

Only one group has remained protected: the exiting chief executives. Impending financial ruin did not stop the companies from paying their top executives millions of dollars during their final days. — Hiroko Tabuchi 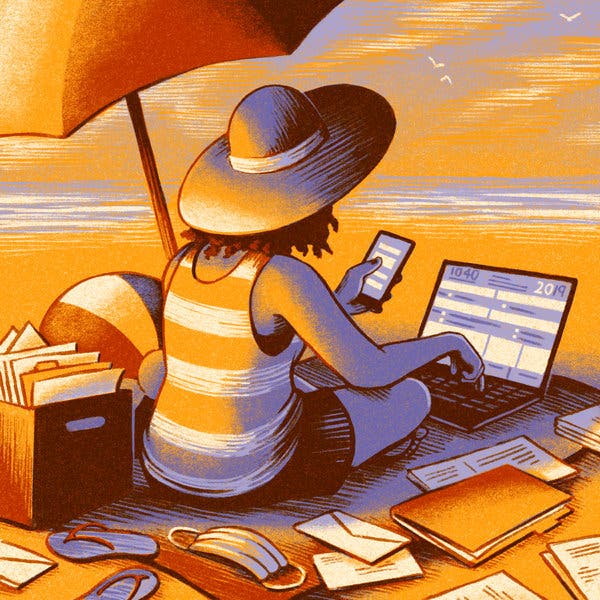 Now that Independence Day is behind us, tax day is fast approaching.

Because of the coronavirus pandemic, the Treasury Department postponed the traditional April 15 federal tax filing deadline until July 15. And this time, there’s no wiggle room. Last month, the Internal Revenue Service announced that there would not be another blanket filing delay.

So if you haven’t filed your return yet — or if you’ve filed but haven’t yet paid the taxes you owe for 2019 — the deadline is Wednesday.

“It’s just like April 15, but in July,” said Cindy Hockenberry, director of tax research and government relations for the National Association of Tax Professionals, a trade group.

And some taxpayers are facing long delays in getting the refunds they’re owed, according to a report from Erin Collins, the new national taxpayer advocate, who represents filers. — Ann Carrns 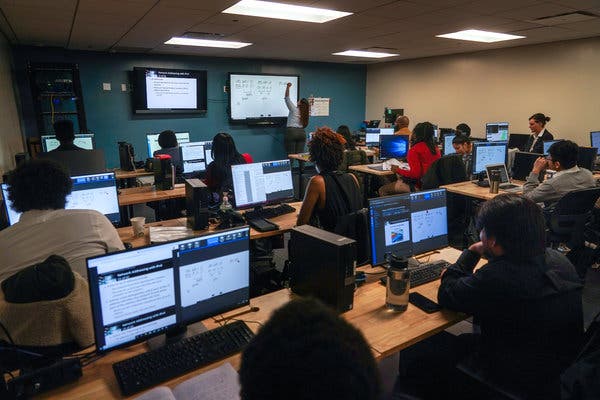 Students at Per Scholas in the Bronx in February. Programs like this that help prepare low-income adults for higher-paying careers have recently turned to remote teaching.Credit...Chang W. Lee/The New York Times

Economists, business leaders and labor experts have warned for years that a coming wave of automation and digital technology would upend the work force, destroying some jobs while altering how and where work is done for nearly everyone.

In the past four months, the coronavirus pandemic has transformed some of those predictions into reality. By May, half of Americans were working from home, tethered to their employers via laptops and Wi-Fi, up from 15 percent pre-pandemic, according to a recent study.

The rapid change is leading to mounting demands for training programs for millions of workers. On their own, some of the proposals are modest. But combined they could cost tens of billions of dollars, in what would be one of the most ambitious retraining efforts in generations.

A group of mainly corporate executives and educators advising the Trump administration on work force policy called for “immediate and unprecedented investments in American workers,” both for training and help in finding jobs. And even before the pandemic, former Vice President Joseph R. Biden Jr. had proposed investing $50 billion in work force training.

In Congress, there is bipartisan support for giving jobless workers a $4,000 training credit.

“This is the moment when we should make a significant public investment,” said David Autor, a labor economist at M.I.T., “when we should have a Marshall Plan for ourselves.” — Steve Lohr 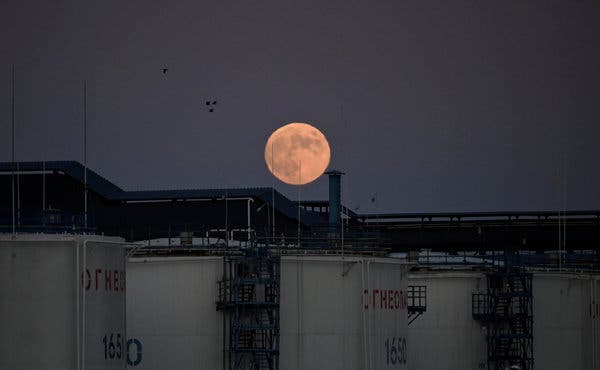 Storage tanks behind the oil refinery in Omsk, Russia. In April, Russia, Saudi Arabia and other producers agreed to cut production by a record 9.7 million barrels a day.Credit...Alexey Malgavko/Reuters

After agreeing this spring to drastically cut back on oil production to keep prices stable in the face of widespread lockdowns imposed to contain the coronavirus pandemic, the world’s major oil producers, including Saudi Arabia and Russia, are considering reversing some of the cuts.

Representatives for the oil-exporting countries will meet to discuss the plan on Wednesday. Their decision is being complicated by the surge in cases of the Covid-19 virus in the United States and Brazil. 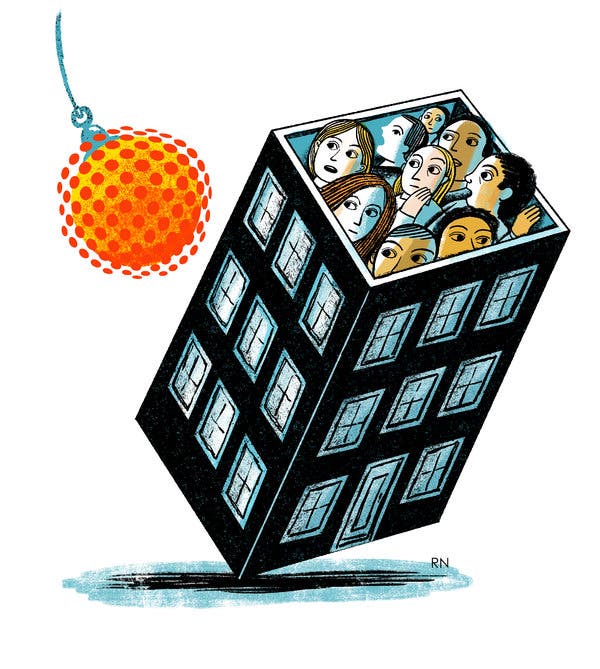 If you have a mortgage and can’t afford to pay it because of fallout from the coronavirus, you may be able to push off your payments for several months, or even into next year. But if you’re struggling to pay your rent, your options are probably much more limited.

Local, state and federal governments have laid out a patchwork of programs to pause certain eviction proceedings, but some of those have already expired — and one eviction protection component set out in the CARES Act is scheduled to expire by July 25.

If you’re having trouble paying your rent, your situation might feel hopeless. It may not be — and experts have these suggestions for what to know and what to do.

Act First If you’ve lost your job or part of your income, your instinct may be to avoid your landlord. But it’s probably better to make contact and explain what’s going on.

Don’t Just Leave In most areas, you don’t have to move until there has been some sort of legal finding against you and an officer of the law arrives to carry out any order of eviction.

Get Legal Help Contacting your local Legal Aid office is a good start.

Consider the Landlord They have to pay utilities, taxes, maintenance and insurance, too.

Review the Rules Depending where you live and the details of the mortgage for the property you occupy, you might be protected from eviction. — Ron Lieber

Daniel Sturridge: Returning to the Premier League is my priority. I'm more hungry for football than ever
In Valencia, a coronavirus was detected in two people
And yesterday we also played football. The Copenhagen Keeper made 13 saves, Lukaku scored in the drop, Brunu dragged Manchester United into the semi-finals
Daniel Sturridge: I was Bursting with excitement when I saw the Liverpool players celebrate the championship
Southampton midfielder Schweinsteiger passed the examination before transfer to Tottenham
Jurgen Klopp: Tsimikas will fit perfectly in the Liverpool dressing room
Gradecki about the departure Bayer: Very disappointing. Let's try to win the Europa League next season
Source https://www.nytimes.com/live/2020/07/13/business/stock-market-today-coronavirus

It's illegal to criticize Thailand's king. They're doing it anyway

After nine years as CEO of Apple, Tim Cook is now a billionaire

The ship that leaked oil into pristine Mauritian waters could break in two. That would be an environmental catastrophe

Children Are Not Immune

Russia has officially registered a Covid-19 vaccine, with the President revealing one of his daughters has taken it

How the Democrats Are Lining Up Their Convention Speakers

UK sheds 730,000 jobs because of the pandemic and wages are falling

3 races to watch Tuesday in Minnesota and Georgia

Lebanon Should Seize This Devastating Moment for Lasting Change

Help! I Can’t Believe My Son’s Friend Fed Him Indian Food Without Calling Me First.

Can a Podcast Change Your Life?

Dear Care and Feeding: Can I Tell My Son His Beloved Dead Grandmother Was Actually Awful?

I-395 traffic diverted to Glebe Road

Coronavirus breaks out again in New Zealand after 102 days

Opinion | No, Now Is Not the Time for Another Russia Reset

US Top Diplomat Heads to Central Europe as US Looks to Confront Russian, Chinese Influence

At Least 97,000 Children Tested Positive For Coronavirus In Last 2 Weeks Of July

This 21-year-old thought he had overcome a mild case of Covid-19. Then he went into organ failure

'I Remember Him With That Smile': Beloved Phoenix Doctor Dies Of COVID-19 At 99

Brook Lapping To Make Landmark 20th Anniversary 9/11 Film For ITV & France Televisions, With A+E Networks Set To Board In U.S.

English grandpa goes viral on TikTok for his thick Cornwall accent: 'I have no idea what he is talking about'

'We Had To Get Out.' Despite The Risks, Business Is Booming At National Parks

What Are the Chances Trump Could Actually Go to Jail?

Concrete, a Centuries-Old Material, Gets a New Recipe

17 Learning Tools For Your Next Outdoor Excursion

In the Wake of Covid-19 Lockdowns, a Troubling Surge in Homicides

Rage Is Both Black and American

The Revolt of the Republican Strategists

Our President Got the Virus. I Barely Noticed.

Millions Turn To Stock Trading During Pandemic, But Some See Trouble For The Young

What Do We Do About a Neighbor Who Breaks Distancing Rules?

Left Out of the Census

Tech smarts: How to tell if someone blocked your calls

New York, San Francisco may not rebound after pandemic exodus, other factors: column