There’s nothing like a neat and clean work space to get the job done.

The coronavirus pandemic has upended the traditional academic year for millions of American students, inspiring one crafty dad in California to make virtual learning a bit easier for local kids in need. To help start the school year off strong, the man has produced dozens of free desks for children in the community.

Mitchell Couch of Lemoore has been a carpenter for over 20 years, and joked that his two kids took over the kitchen table when they began distance learning this year. 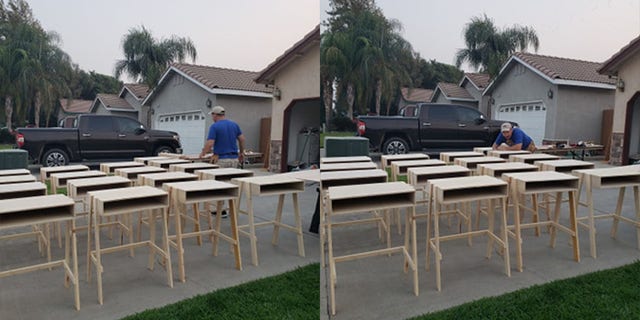 To help start the school year off strong, Mitchell Couch has produced dozens of free desks for children in the community. (Mitchell Couch)

AMERICA TOGETHER: UPLIFTING IMAGES FROM ACROSS THE COUNTRY

“Their school work was always all over the table and we were constantly having to move it, so I built some desks for my kids so they could have their own space,” Couch told Fox News on Thursday. “When I was building the second desk, I thought that others might benefit from knowing how to build their own desks. I did a quick YouTube video, and posted a few directions along with a materials list, hoping that it could help anybody out.”

From there, the owners of local supermarket Grocery Outlet caught wind of the tutorial, and offered to supply materials if Couch was willing to make more. 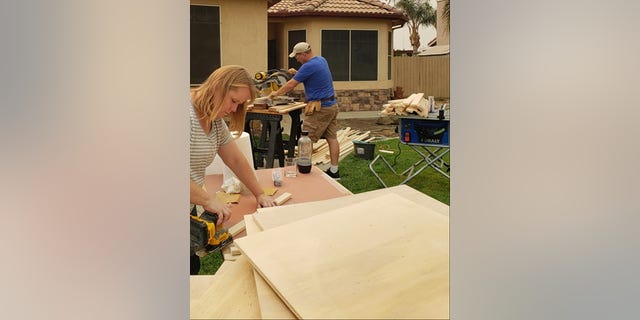 The dad accepted the challenge and has since built dozens of wooden desks to date, while the requests keep on coming. (Mitchell Couch)

The dad accepted the challenge and has since built 37 wooden desks, while the requests keep on coming.

Couch said that the must-have furniture has since been distributed free of charge to local students through nearby school districts, making their way to families in Lemoore and the surrounding rural areas. 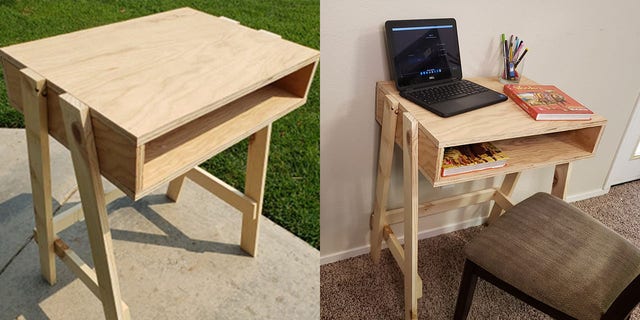 “When you focus [on those] around you, you can have the greatest impact by just helping and being charitable with your neighbors and friends.” (Mitchell Couch)

“Agriculture is huge in our area so we have a lot of farm workers and there are families that are in need,” he explained.

Couch also recently shared the story to Reddit – where it has since gone viral with over 140,000 upvotes – and says he’s shocked by the “overwhelming” hype the good deed has received.

“I never would have imagined the reaction that I got,” he told Fox. “When I posted to Reddit I was able to answer a lot of questions. When I woke up the next morning I had hundreds of comments, questions and messages from around the world.”

Looking ahead, the handyman is hoping to produce a second wave of desks in the near future “because we don't know if schools in our area will be opening anytime soon.”

In a larger sense, now and especially during these unprecedented times, he stressed that one of the “most important things” a person can do is help their local community.

“Sometimes we look at things on a national or worldwide level and it can bring us down,” Couch offered. “When you focus [on those] around you, you can have the greatest impact by just helping and being charitable with your neighbors and friends.”

Keane has scored 4 goals in PSG's last 2 games. In 37 games at Everton, he had the same number
Carragher on Mourinho: they Said his football was from a different era. If he won the Premier League, it would be great
Gennaro Gattuso: Napoli need to play above all praise to beat real Sociedad
Neymar was substituted in the 26th minute of the match against Istanbul due to injury. He was crying
Juventus shares have risen four times in five years. Ronaldo-this is only one of the reasons
Gary Neville: Mourinho gives Tottenham the confidence to win the Premier League. Jose is only Interested in winning
Rivaldo: I'm not sure about Barcelona's chances of winning the Champions League
Source https://www.foxnews.com/lifestyle/california-man-dozens-desks-support-virtual-learning-students

The Infodemic: Wearing a Facemask Isn't Harmful to Health

Everything coming to and leaving Hulu in November 2020

The COVID-19 Pandemic Has Been Tough on Shopping Malls. History Suggests We Should Be Wary of What Might Replace Them

From Encyclopedias to Telephone Books, How Alphabetization Took Over the Modern World

Trump came and left in his Air Force One; thousands stranded in Omaha's cold, dark night

Task force warns of 'unrelenting, broad community spread' in the Midwest and West

As COVID-19 Cases Surge In Illinois, A Clash Over Safety Guidelines

'No Excuse For The Looting': Biden, Trump Respond To Philadelphia Protests

Ex-DHS official reveals himself as 'Anonymous'

Even vampire bats know to socially distance themselves when they get sick, study says

Ari Fleischer: Biden is 'taking advantage of' a 'broken-down media' that is 'biased against Trump'

7 red flags someone is stealing your Wi-Fi

It’s Hard to Enforce Pandemic Health Rules on Halloween. Just Look at What Happened in 1918

Group of Mississippi inmates baptized: 'We hope this is a new start,' authorities say

Justice Dept. charges 8 in Chinese harassment plot in US

Priestman takes over as coach of Canadian women’s team

Parents, teachers push back on DC’s plan to reopen schools to more students

Chris Jackson on Why the Status Quo is Killing Us

At 105, Carmen Herrera is Inspiring a New Generation of Artists in Harlem

U.S. to Establish Embassy in the Maldives

Rev. Samuel Rodriguez: Biden vs. Trump -- Why Latinos in Florida are turning to Trump

No. 4 Notre Dame, others look to end No. 1 Clemson's ACC run

What we know about the Philadelphia Police shooting of Walter Wallace Jr.

Wall Street is spooked, but should have seen this coronavirus surge coming

QAnon YouTubers sue platform after their channels were removed

Biden takes Trump to task for leaving constituents literally out in the cold: 'It’s time to change!'

After Trump campaign abandons shivering supporters in Omaha, Joe Biden has a message for them

Loaded No. 21 USC grateful to be in Pac-12 title chase

What's Next for the Unluckiest Generation?

Trump is leveling with voters, telling them he'd never be in swing states unless he needed their votes