Rap darling Cardi B took offense at what Wiz Khalifa had to say in a quick Twitter Q&A the fellow emcee conducted the day next year’s Grammy Award nominations were announced.

“As a Grammy nominated artist I know how it feels. Ni**as always think its unfair until they get their turn,” he wrote. “Just keep workin and that time’ll come through.” In his next missive, he said, “I felt like I got throughly [sic] robbed for See You Again. Haven’t been bacc since, but when tha time comes ima have a joint rolled and dope ass speech ready. And it’s Taylor Gang Or Die.” 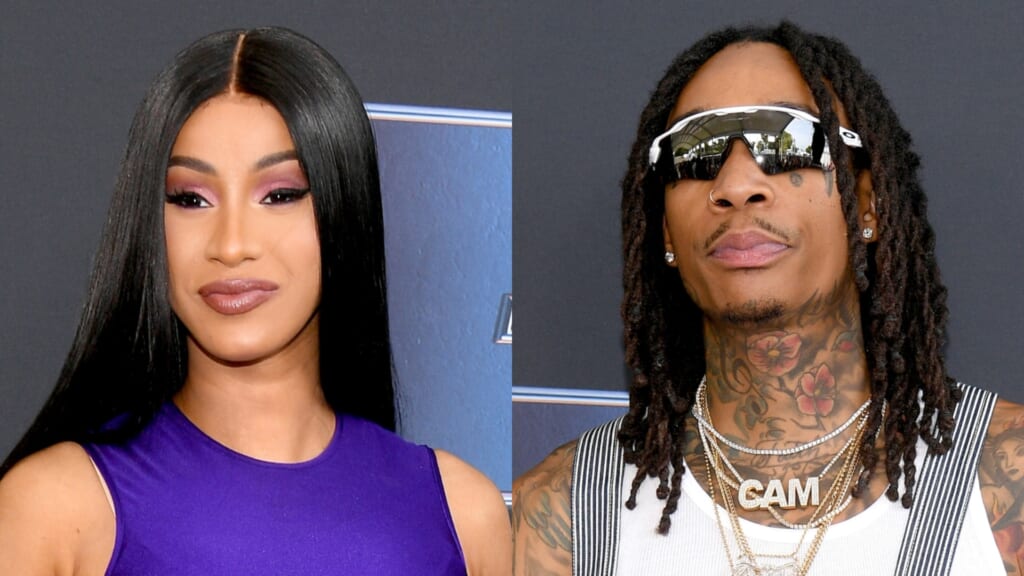 Cardi B (left) and Wiz Khalifa are shown at January’s “The Road to F9” Global Fan Extravaganza at Maurice A. Ferre Park in Miami. She took offense to a recent tweet of his about the Grammys.(Photos by Dia Dipasupil/Getty Images)

Khalifa addressed several commenters’ questions and claims related to the awards, including the fact that the ceremony made a practice of airing the winners in hip-hop categories before the live show or during commercials.

“Yea that sh*t is crazy,” he shared. “Ni**as get all dressed up to find out ya shit got read during a commercial break.”

But it was a seemingly passing comment that upset Cardi when Khalifa replied to a tweet from a fan opining that “Cardi winning a Grammy when Nicki Minaj didn’t is the biggest proof that they don’t know a sh*t bout music.”

Said Khalifa in response: “Most self made artists have this problem.”

Cardi then joined the exchange by posting a four-year-old direct message from the “Black and Yellow” rapper in which he congratulated her.

“Don’t stray away from the things that are important to you and make you you,” he wrote. “Your [sic] doing a great job and the way you address things is admirable. Keep your light shining and don’t let others take it. Peace and love.”

“This was Nikkas in my dms in 2016!” Cardi wrote. “They really support you when you grinding at the bottom then it’s a different story when you make it!”

She then tweeted: “I don’t understand why ni**as entertain tweets that pit successful women against each other? Ya not tired of that? Specially when ya was rooting hard when a b**ch was at the bottom.”

Khalifa seemed to take a light-hearted approach in his reply to her tweet of his message, saying, “Damn that wuz good advice. I still support u. Nothings changed. Your [sic] self made in my book as well.”

When a fan implied that he shouldn’t have engaged with Cardi, he wrote, “I just don’t want a Cardi/ Wiz war goin on for no reason.”

Flick on Bayern: Our goal is to stay on top
Goalkeeper Alcoyano has 10 saves in the match with Real Madrid. Most of all in the season among the rivals of Madrid
De Bruyne has a suspected muscle injury. He was replaced in the game against Villa
In Spanish for 70 years there is a phraseology about Alcoyano. It's about an outsider who does not give up until the last
Andrea Pirlo: Criticism is inevitable when you are suddenly appointed Juve coach, but the results will say everything for me
Zidane on relegation from the 3rd League club: It's not a shame, let's not go crazy. Real Madrid wants to win, sometimes it doesn't come out
Real Madrid were eliminated from the Spanish Cup for the fifth time by a team from the 3rd league
Source https://thegrio.com/2020/11/25/cardi-khalifa-grammys-twitter/

Bruce Springsteen sings ‘Land of Hope and Dreams’ to open the inaugural special.

As President Biden delivered his inaugural address, a man in uniform honored his son Beau.

Michael Ellis, Trump Appointee at N.S.A., Is Placed on Leave

Colby Covington reflects on Trump's presidency: 'Thank you for being the champion the people of America need'

Where Biden stood, reminders of a failed insurrection

Rihanna celebrates Biden's inauguration by taking out the trash

Biden Warns His Appointees: If I Hear You Disrespect Someone ‘I Will Fire You on the Spot’

'Transparency back to the briefing room': Psaki commits to pre-Trump press norms

No meltdowns: Jen Psaki’s first briefing as Biden press secretary was a breath of fresh air

The Latest: NBA’s Wizards cleared to return to practice

A Stutter Brought Biden and This Teen Together. Now He's Writing a Book About It.

Ahead of inauguration, Biden received message from Queen Elizabeth

Biden’s Nieces! Bernie’s Mittens! All of Michelle Obama! The Altogether Thrilling Fashion of the Inauguration, Reviewed

Why did Amazon wait until Biden’s inauguration to offer help with vaccine distribution?

Can Biden's call for unity in his inaugural speech work? Yes — and here's why

Jen Psaki Is Praised for “Not Crazy” First Press Conference

Packers realize how much Rodgers has at stake this weekend

Chicago immigrants say they’re ready to mobilize to push Biden’s proposed immigration bill: ‘We will not stop until we get it’

Do not let anything stop you

On Day One, Biden targets Trump policies on climate, virus

Biden rescinding the 1776 Commission doesn't end the fight over history

These are the kids in the First and Second Families

Opinion | No, There Won’t Be Unity

Proud Boy organizer arrested in Florida for riot at Capitol

NRA fights for its future in Texas, New York courts

Police: Alabama officers killed man who fired at them

EU ready for new US leadership under Biden: 'After four long years, Europe has a friend in the White House'

Biden’s Calls for Unity Are Already Being Tested in Congress

Column: It took President Biden just 21 minutes to remind us who we are

White House Press Secretary Jen Psaki, In Debut, Pledges To Bring “Truth And Transparency Back To The Briefing Room”

Biden to new administration staffers: Be nice to others or 'I will fire you on the spot'

EXPLAINER: What's next after US accused China of genocide

'This moment belongs to all of us:' Black women exult as Kamala Harris walks into history

Who is Jen Psaki? Biden's Press Secretary Pledges to Bring Transparency Back

'The end is not yet in sight': Coronavirus danger remains even as some metrics improve, L.A. County says

In the Oval Office for the first time as president, Biden begins to roll back Trump’s legacy.

Is Mask-Slipping the New Manspreading?

After an Inauguration Like No Other, the Work Begins

Joe Biden’s Immigration Bill Aims to Address the Root Causes of Migration. Will it Work?