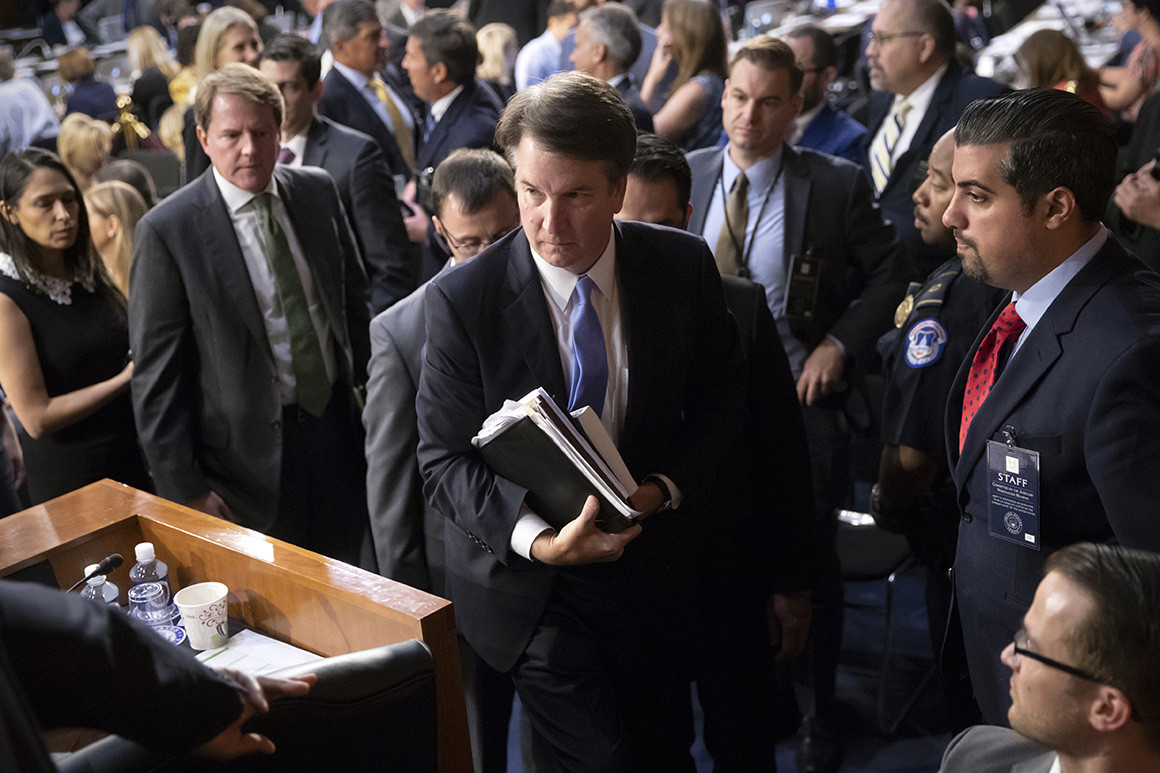 After a year of powerful men being brought low by allegations of sexual harassment and assault, reporters and critics of the president were on the lookout for similar accusations against Brett Kavanaugh. | J. Scott Applewhite/AP Photo

Christine Blasey Ford, who on Sunday publicly accused Supreme Court nominee Brett Kavanaugh of sexually assaulting her as a teenager, told The Washington Post that she did not want her identity to be known.

Then a uniquely 2018 blend of media pressure, leaks and aggressive reporting — all condensed into a warp-drive media cycle over a period of less than a week — conspired to change her mind.

Some Republicans have seized on the 11th hour timing of Ford’s allegations — which Kavanaugh has denied — in attempts to dismiss her story as a last-ditch attempt to sink President Donald Trump’s nominee to replace Justice Anthony Kennedy.

Yet it appears the California resident became a public advocate as a result of a series of cascading reports from a news media that has grown experienced at chasing down #MeToo allegations against powerful men.

“From our reporting (like the Post's) there's nothing to indicate the timing was calculated,” Buzzfeed editor in chief Ben Smith, whose outlet had tried to reach Ford, tweeted Sunday about her decision to unmask herself. “Last Monday she clearly didn't want to tell her story to a reporter. Then whispers of the letter leaked into public.”

After a year of powerful men in media, politics and entertainment being brought low by allegations of sexual harassment and assault — and with the memory of Anita Hill’s testimony about then-Supreme Court nominee Clarence Thomas — reporters and critics of Trump were on the lookout for allegations of scandal in Kavanaugh’s background. Republicans were also ready for the possibility that he could be accused of hostility toward women.

Over the summer, Kavanaugh’s critics circulated an opposition research document tying him to former 9th Circuit Judge Alex Kozinski, who retired after former female clerks accused him of sexual harassment. But there appeared to be no conclusion that Kavanaugh acted inappropriately.

The turmoil now enveloping Ford was quietly starting around the same time, when the Palo Alto University professor contacted The Post through a tip line and sent a letter to her congresswoman, Democrat Anna Eshoo, who forwarded it to California Sen. Dianne Feinstein’s office. For weeks, no word of Ford’s story made it to the public, even as Kavanaugh’s confirmation hearings began after Labor Day.

The Washington Post declined to comment on its reporting on Ford. According to the story by reporter Emma Brown, even though Ford had reached out to the paper, she declined to go on the record with her accusations. As recently as late August, Ford had decided that she would not come forward publicly because she did not think her story would affect Kavanaugh’s confirmation. She said to The Post, “Why suffer through the annihilation if it’s not going to matter?”

Feinstein, too, seemed unwilling to go public, a decision that has drawn scrutiny from fellow Democrats, who thought she should have acted more forcefully, and Republicans, who have questioned her timing. Feinstein said in a statement that Ford had “strongly requested confidentiality” and that she had “honored that decision.”

The situation began to change on Wednesday, though, when The Intercept published a story reporting that Feinstein was withholding a letter from a constituent describing “an incident involving Kavanaugh and a woman while they were in high school.”

Soon after, Feinstein put out her statement acknowledging the letter and saying she had sent it to federal investigators — and it was then that the media attention started to build. The next day, The New York Times reported that the accusations involved “sexual misconduct.” And star New Yorker reporter Ronan Farrow dug in with veteran staff writer Jane Mayer, leading to yet more details of Ford’s accusations — though not yet her name.

The Post reported Sunday that Buzzfeed had sent a reporter literally to Ford’s doorstep, attempting to question her both at home and at work.

“Through the course of regular reporting, BuzzFeed News had attempted to speak with her prior to news of the letter breaking. She declined to comment,” Buzzfeed Washington bureau chief Kate Nocera tweeted Sunday.

The Post reported that, until now, Ford had declined to speak on the record “as she grappled with concerns about what going public would mean for her and her family — and what she said was her duty as a citizen to tell the story.”

But with her story leaking out in bits and pieces, Ford’s thinking changed. In her interview in the Post, she said that she felt frustrated by inaccuracies she was hearing in the news and that, with reporters at her door and calling colleagues about her, she felt her privacy was diminishing anyway.

“These are all the ills that I was trying to avoid,” she told The Post. “Now I feel like my civic responsibility is outweighing my anguish and terror about retaliation.”

Ole Gunnar Solskjaer: I Think it was a penalty against Aston Villa
Philadelphia played in t-shirts with the names of black people who died at the hands of the police
Kompany tries everything at Anderlecht: he coached without a license (terrible), played 15 matches and invested 3 million euros in the club
Aston Villa coach on Manchester United penalty: A shameful decision
Paul Pogba: Winning the Europa League and the FA Cup are two of Manchester United's goals for this season
Manchester United's first ever Premier League win 4 consecutive games with a difference at least 3 goals
Brunu has scored 7 (4+3) points in his last 3 games for Manchester United
Source https://www.politico.com/story/2018/09/16/christine-blasey-ford-kavanaugh-allegations-826068

Has John Roberts been watching 'Hamilton'?

NJ Flood Dragged Her Into a Tunnel. Miraculously, She Survived.

Savannah, Chase Chrisley talk the 'pressure' of growing up on TV: It 'changed our lives'

Coronavirus in the World: Live Updates

Hot weather streak continues into third week; rain and humidity for the weekend

Brit Hume: Prospective Biden platform moves Democratic Party 'farther to the left than it's ever been'

Embattled USS Theodore Roosevelt returns to US after COVID-19 outbreak

Michael Cohen Back In Prison After Refusing Furlough Terms

Former ‘Glee’ star Naya Rivera's loved ones in ‘disbelief’ amid her disappearance: report

Storm off Mexico likely to be east Pacific’s first hurricane

Giants’ Nate Solder, B.J. Hill and Wayne Gallman must step it up

Mnuchin wants ‘another round’ of stimulus checks passed this month

Most Starbucks Locations Will Require Customers To Wear Face Coverings

Man charged in death of Indiana teen last seen in 1986

Search continues for Naya Rivera; ‘recovery’ is a ‘slow process’ due to ‘difficult conditions’: authorities

This Week in Statehouse Action: What a Fool Believes edition

Why Sanyu, the 'Chinese Matisse,' is setting the art market alight

Lush gardens. A waterfall. An airport built to awe in Singapore is quieted by COVID-19

Labor secretary says schools essential, like factories -- but plants have had Covid outbreaks

Imagine being forced to live with your boss. That's the case for nearly 400,000 women in Hong Kong.

Most say people should be able to sue police for misconduct, poll finds

The Coronavirus Can Be Airborne Indoors, W.H.O. Says

North Korea Says It's Not Interested in Another Trump-Kim Summit

US Sun Belt has more new coronavirus cases than any country

Henrik Lundqvist is back working out with the Rangers

Biden will heed the CDC on reopening schools, his wife pledges

Hall of Famer Randy Moss: Patrick Mahomes could 'possibly' be the greatest quarterback of all time

Flying While Infected? No Federal Law Will Stop You

The Latest: ICU beds filling up in Mississippi’s virus surge