A state-run drug company in China used its own employees as test subjects for COVID-19 vaccine trials even before the government approved the testing for people.

The move -- which raises questions of potential international ethical violations by China's top drug companies -- signals a major leap toward developing a coronavirus vaccine ahead of the rest of the world, and the country's willingness to push boundaries to get there.

“Giving a helping hand in forging the sword of victory,” reads an online post from Beijing-based SinoPharm, with pictures of workers it says helped “pre-test” its vaccine, according to reports by The Associated Press. 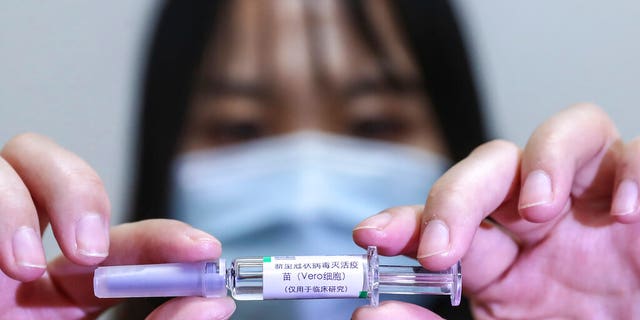 In this April 10, 2020, photo released by Xinhua News Agency, a staff member holds up a sample of a potential COVID-19 vaccine at a production plant of SinoPharm in Beijing. (Zhang Yuwei/Xinhua via AP)

SinoPharm claims that 30 “special volunteers” agreed to be injected with the vaccine even before the company got permission for its initial human study. The company’s post cites a “spirit of sacrifice” and shows seven men in suits and ties — a mix of scientists, businessmen and one Communist Party official with a background in military propaganda.

"Research ethics review and ensuring informed consent for all participants joining a vaccine or therapeutic trial is the ethical bare minimum for any study," Summer McGee, dean of the University of New Haven's School of Health Sciences, told Fox News on Thursday. "China must ensure the trials are sound and not exploiting anyone for the results to be valid and accepted around the world."

Competing against the U.S., Britain and other world players racing to develop a vaccine nearly eight months after coronavirus infected over 13.6 million people across the globe, China's strides appear promising. Eight of nearly two dozen potential vaccines in various stages of human testing worldwide are from China, the most of any country. 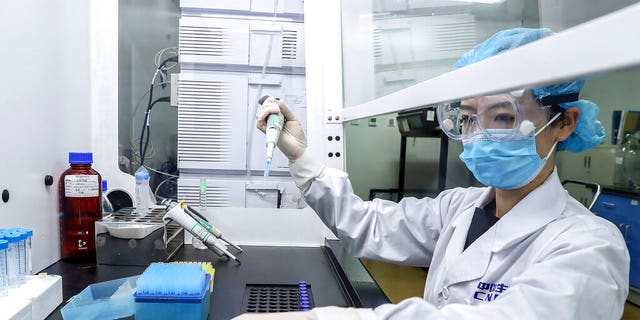 In this April 11, 2020, photo released by Xinhua News Agency, a staff member tests samples of a potential COVID-19 vaccine at a production plant of SinoPharm in Beijing. (Zhang Yuwei/Xinhua via AP)

SinoPharm is approved to begin clinical trials in Abu Dhabi in the final phase of vaccine development using up to 15,000 volunteers -- making China and the UAE the first in the world to test an inactivated vaccine -- Middle Eastern city officials announced Thursday, according to Reuters.

China has poured its resources into the inactivated testing technique, which grows a whole virus in the lab and then kills it, using the dead strain of the coronavirus to trigger an immune response in humans, similar to the technique behind the polio vaccine. Western competitors have opted for another, newer and less proven method that targets the “spike” protein that coats the virus.

"The entire world is working at breakneck pace to develop a vaccine, but even in a global pandemic, this is not the time to cut ethical corners," McGee said. 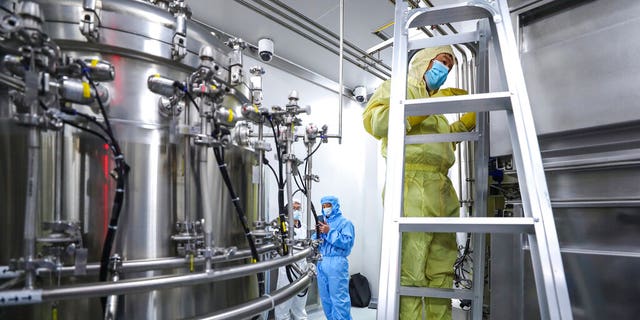 In this April 11, 2020, photo released by Xinhua News Agency, staff members check and clean equipments at a vaccine production plant of SinoPharm in Beijing. (Zhang Yuwei/Xinhua via AP)

Despite ethical concerns, hundreds of SinoPharm employees, including top executives, have received trials of the vaccine before approvals, Chinese news media have reported.

Subsidiary groups of SinoPharm have already begun building factories capable of generating over 200 million doses of the potential vaccine annually, the company said, according to reports by Fortune.

Pirlo took charge of Juventus
Toni Kroos: No criticisms from the Board. He had an outstanding season
Director of Bayer Feller: there is no discount On Havertz because of the coronavirus. Buy on our terms
Cristiano Ronaldo: for Juve, the season ended earlier than we expected. The fans are demanding more
Juventus will appoint Pirlo as head coach (Fabrizio Romano)
Arthur plans to attend the Barcelona-Napoli match in the Champions League
Vinicius is upset that he doesn't play enough in Real life. PSG are actively monitoring the player
Source https://www.foxnews.com/world/china-workers-coronavirus-vaccine-drug-company

Nearly two-thirds of NYC parents don’t want their kids back in school: data

Raft Off on Lake St. Clair defies ban on gatherings of 250-plus people

As Democrats allege USPS 'sabotage,' a conspiracy theory in the making

Anthony Beauvillier’s ‘have fun’ mantra paying off big for Islanders

Meet Keith Knight, the Cartoonist Who Hulu’s ‘Woke’ is About

Thousands in Beirut protest in a "day of judgment" after blasts

Coronavirus in Illinois updates: Statewide count of confirmed COVID-19 cases surpasses 2,000 for the second day in a row

Despite polls and pandemic, Trump campaign argues candidate better positioned than in 2016

The Voting Will End Nov. 3. The Legal Battle Probably Won’t.

How I scored a big laugh from the great Pete Hamill

Lions look to develop Golladay into NFL's top-tier of receivers

Failure wasn't an option on coronavirus aid. It was the only option.

Bodies of 8 Military Recovered After Vehicle Sinks During Training

Relax With the Best CBD Roll-Ons

Sanjay Dutt admitted in the ICU over breathlessness amid coronavirus scare

Biden edges closer to VP pick: Here's who's up and who's down

The Latest: Moving day at the PGA Championship

Over 250 quarantined in Georgia district after first week of school

Big Ten football teams to practice without pads due to pandemic

TikTok To Sue Trump Administration Over Ban, As Soon As Tuesday

A Memphis woman, barely recovering from COVID-19, was evicted from her home

More than 300K in NYC area still without power after Isaias

Why millennials’ distaste for Baby Boomers is justified

Biden quips to Fox News he decided on VP, campaign says it's a joke

'I never felt like that before:' Tigers prospect Skubal on mend after COVID battle

After clashing with Trump over pandemic response, Maryland's Hogan now under fire for his own state leadership

What not to do in a bear attack? Push your slower friends down in attempts of saving yourself, says the National Park Service

Dark dystopian shows are out as Americans binge on comfort TV

Hina Khan 'felt like a baby' working in 'Naagin 5'