Amy Fettig is the executive director of The Sentencing Project, a nonprofit research and advocacy organization that works to promote reforms in sentencing policy, reduce racial disparities in the justice system and end mass incarceration. The views expressed here are her own. Read more opinion on CNN.

(CNN)Days after a devastating federal appeals court ruling that struck a major blow to voting rights for Floridians with felony records, Michael Bloomberg and a cadre of celebrities are donating millions to help some potential voters the court deemed ineligible. Florida's attorney general asked the FBI and Florida's Department of Law Enforcement to investigate Bloomberg's efforts to reinstate these voting rights. The ruling this month upheld a new Florida law requiring people with past felony convictions to pay all fines and legal fees before they can vote. These fees can amount to thousands of dollars for a largely indigent population. 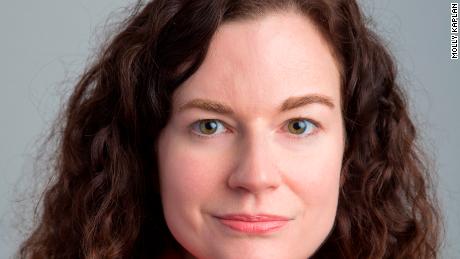 A lower court ruling previously found the law established an unconstitutional poll tax and unfairly discriminates against low income people who are unable to pay these fees. Hundreds of thousands of people will now be denied the ability to cast a ballot in November.

While Bloomberg's actions are commendable, poll taxes on our democracy are unacceptable, and citizens shouldn't need to rely on the rich to ensure their voting rights.

Despite Bloomberg's generosity, the court has reinforced an unjust practice that is deeply tainted by the legacy of white supremacy and systemic racism. Across the country, according to research from the Sentencing Project, millions of people -- disproportionately African Americans -- cannot go to the polls because they were previously convicted of a felony.
The history of felony disenfranchisement laws is unambiguous. While the practice of restricting voting rights because of a criminal record originated in English common law prior to the American Revolution, laws restricting voting rights were widely instituted across the South following the Civil War. During the Jim Crow era, disenfranchisement laws systematically targeted Black men and undermined their political voice, effectively guaranteeing the economic and political marginalization of the Black community.
While many Jim Crow laws were repealed in the wake of the Civil Rights Movement, felony disenfranchisement remained on the books and its impact grew exponentially as mass incarceration increased at the federal, state and local level. Over the past 40 years, according to the Sentencing Project's analysis of Bureau of Justice statistics, the prison population has grown 500%. According to that same study, Black Americans have been deeply harmed by these developments, with the lifetime likelihood of imprisonment for Black men born in 2001 an alarming one in three. For White men, that ratio is one in 17.
The implications are devastating. After conducting a 50 state analysis, The Sentencing Project found that 1 in every 13 Black Americans has lost the right to vote due to felony disenfranchisement laws.
As the implications of these policies have become clear, a national movement to restore the right to vote to people with felony convictions has emerged. Since 1997, 25 jurisdictions have enacted reforms to re-enfranchise individuals on probation, parole, or after completion of sentence. Nevertheless, in some instances politically-inspired measures have derailed this progress. The recent Florida court decision is a case in point. For decades, the state denied voting rights permanently to anyone with a felony conviction, impacting over one million people. But, in November 2018, Floridians overwhelmingly voted to enfranchise most individuals upon completion of their sentence. It was a remarkable victory won by a powerful coalition led by formerly incarcerated advocates.
Then, months later, a Republican-dominated state legislature and Gov. Ron DeSantis instituted the new law requiring payment of court fines and fees to access the polls -- essentially undermining the will of Florida voters. The lawsuit filed by disenfranchised Floridians, argued that the state had instituted an intentionally discriminatory policy, one akin to a "poll tax." Historically, poll taxes were used in the Jim Crow South to suppress the votes of poor, predominantly Black communities. In May, a district court judge found for the plaintiffs, referring to the new law as a "pay-to-vote" system. But this month, in a 6-4 vote, a federal court reversed that decision. Notably, five of the six majority judges were appointees of President Donald Trump.
Now, 700,000 people could be denied their chance to have a say in the November election. According to The Washington Post, Black people account for 28% of that group, even though they constitute just 15% of Florida's overall population.
The bedrock of any democracy is the right to vote. No democracy can survive when one group of people is disproportionately subjected to the coercive power of the police, prosecution, the courts and prisons -- and is consequently stripped of voting rights. It is crucial to eliminate felony disenfranchisement laws now, in addition to any rules that establish additional barriers to voting. Several states have taken steps to remove disenfranchisement laws for people with felony convictions who are now living in the community, and a federal bill, the Democracy Restoration Act, would make these voting rights the law of the land for federal elections. But our democracy deserves even better. We need to safeguard the fundamental rights of all our people -- and this means that the right to vote must be preserved regardless of criminal justice status.
Indeed, voting rights should never be restricted for people in prison. That's not a radical idea -- Maine, Vermont, Washington DC, and Puerto Rico allow people to vote while behind bars, a process that has worked very smoothly. Unlike Republican leaders in Florida, a spokesman for Vermont's Republican Party told NBC News in 2018, "The last thing we want to do is start putting up insurmountable barriers to participation in civic life because someone may have been convicted of a crime. People's right to vote is sacred." And, in Puerto Rico, polling sites are located within prisons and participation historically has been high.

Police, prosecutors, criminal courts and prisons should not be the arbiters of our voting rights. It's time to ensure all people can be full-fledged participants in our democracy.

Ozil on not being included in Arsenal's Premier League bid: Very disappointed. Loyalty is rare today
Ronaldo has a bald haircut: Success is measured by the obstacles you overcome 😉 💪 🏽
UEFA on the European Premier League: She's bound to get bored. The Champions League is the best tournament in the world
Salzburg sold Holand and Minamino - and has already gathered new potential stars. The season started with 35 goals in 8 games
Sulscher twice outplayed Tuchel: first he mirrored the scheme (helped to contain), and then released Pogba in time (helped to add to the attack)
Barcelona - the first team to score for two 17-year-old players in a Champions League match
Atalanta's development has reached a crucial point: the club will soon turn into either Napoli or Roma. Miranchuk - a symbol of change
Source https://edition.cnn.com/2020/09/25/opinions/florida-bloomberg-felon-voting-rights-fettig/index.html?utm_source=feedburner&utm_medium=feed&utm_campaign=Feed%3A+rss%2Fcnn_latest+%28RSS%3A+CNN+-+Most+Recent%29

Angelina Jolie Asks the Outgoing Head of MI6 Talk About Protecting Democracy, Fighting Misinformation and His Life as a Spy

Trump’s Antibody ‘Cure’ Will Be in Short Supply

Man of Action: Tyler Perry on Producing During the Pandemic and Why He’s Weighing in on Politics

Richard Harris Festival and His Sons Remember the Actor

8 Lessons in Entrepreneurship From the Greatest Inventor of All Time

See Doug the Pug, Suki Cat and More of the Adorable Animal Star Nominees for the 2020 PCAs

Manchester United's American owners 'should spread some of the wealth', says club legend

Natalie Portman Reveals Why She "Dreads" Training For Thor: Love and Thunder

Officer Involved In Breonna Taylor Shooting: 'It's Not A Race Thing'

A teacher is beheaded, and France's war over secularism, freedom of speech and religious equality reignites

Proposition 16 and Debates About Racial Equity

College Students Aren’t on Campus. Their Missing Votes Could Make a Difference.

Q&A: What is the Commission on Presidential Debates, and where did it come from?

Trump hopes Nevada will bail him out. What do the numbers say?

Florida deputy performs exorcism on child, instructs another to shoot anyone who enters demon-filled home

A Think Tank Skeptical of Trump Triumphed in His First Term

Trump's health care plan is always two weeks away. Now the election is too.

Biden says Sen. Johnson should be ‘ashamed’ for probe into alleged corruption

Cop may face charges in killing of autistic Palestinian

2020 CMT Music Awards: How to watch, who’s performing and everything else you need to know

Must-watch down ballot races in Harris County this election

The secrets behind Lily James’ haunting costumes in ‘Rebecca’

The Nigerian Army Reportedly Opened Fire on Peaceful Protesters. Here’s What to Know

The Notorious B.I.G. Has a ‘New’ Track: An Unreleased Freestyle Turned Pepsi Commercial

In Prop. 22, app-based companies ask voters to resolve what lawmakers would not

After being her own boss, Kamala Harris embraces new role as Biden's No. 2

Morning Digest: Our new dashboard has every key piece of data for every congressional district

Help! My Ex-Husband Spoils Our Daughters With Lavish Gifts.

Montana’s Senate race was supposed to be easy for Republicans. It’s a dead heat.

Elevator Pitch Ep. 2: 'Be Honest, Were You Insulted by That Offer?'

This week on The Brief: Republican maneuvering is backfiring, the Latino vote, which races to watch

Woman dies 2 months after being found alive at funeral home

How to watch the final presidential debate

Black women are the backbone of the Democratic Party. And they feel the heavy burden of this election.

'I waited 21 years for this moment'