Column: The giant green frog from Chicago’s Rainforest Cafe must be preserved. Maybe it can help fight coronavirus? 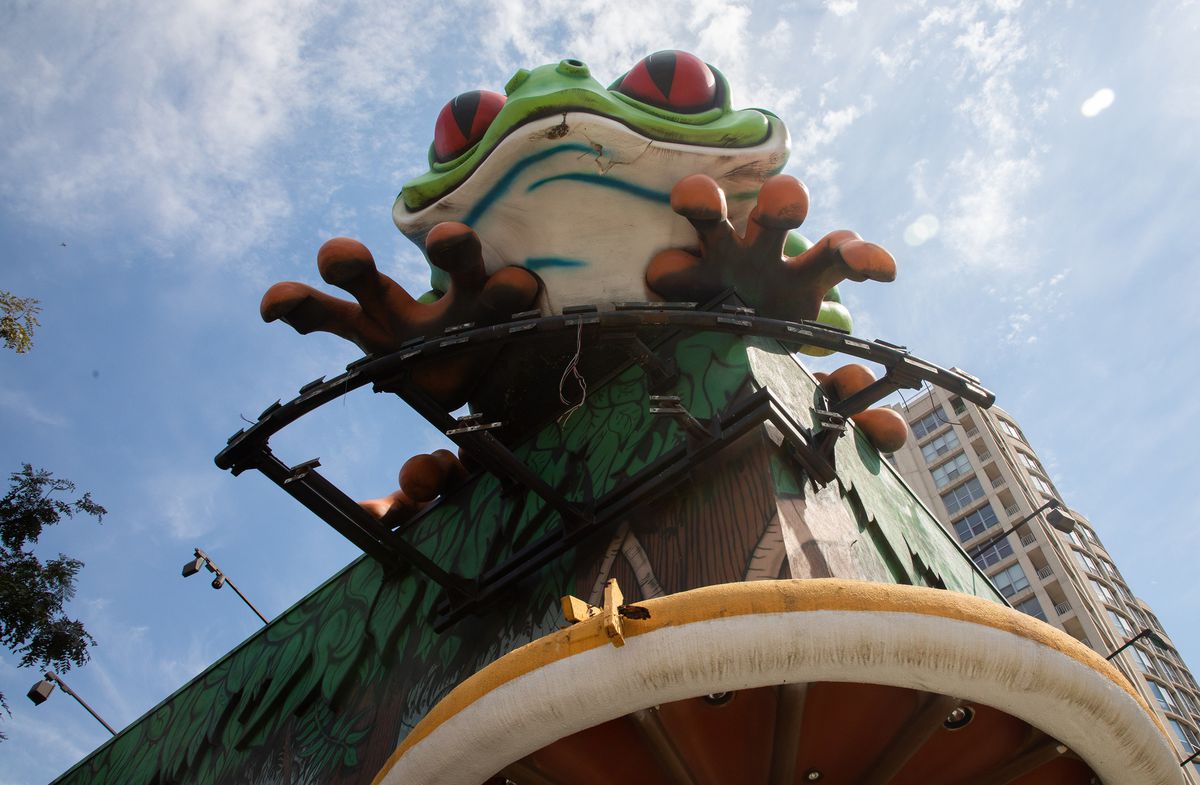 It's uncertain what will happen to Cha! Cha!, the 27-foot-long red-eyed frog perched atop the Rainforest Cafe at the corner of Ohio and Clark streets in Chicago, which has closed. (Zbigniew Bzdak / Chicago Tribune)

Chicago is on the brink of losing a historic landmark: The giant green frog that for years has stood like a silent amphibian sentry over the doors of the city’s Rainforest Cafe, a classic meeting spot for tourists and residents who enjoy eating a Jungle Turkey Wrap in the presence of marginally realistic animatronic animals.

The restaurant in the Near North neighborhood shut down in March due to the coronavirus pandemic, but now we learn it’s closed for good and everything will be moved out by the end of the month.

According to a report by my colleague Ryan Ori, the huge animatronic gorilla that delighted kids and adults (me in particular) will be turned over to the building’s owner, Sean Conlon, who I hope invites me to his home to visit the gorilla.

But the most consequential uncertainty is this: “It’s unclear what will happen to ‘Cha! Cha!’, the 27-foot-long red-eyed frog perched atop the building at 605 N. Clark St.”

Indeed, what will happen to Cha! Cha!?

In the interest of historic preservation, I have some ideas I hope Conlon as well as officials from the Rainforest Cafe’s parent company, Landry’s Restaurants, and city leaders will consider. The year 2020 has already been hard enough. We can’t let our city lose its giant green frog.

Idea 1: Use Cha! Cha! as a coronavirus deterrent.

While the city has enacted relatively strict rules to slow the spread of COVID-19, we’re still seeing ample signs of people not wearing masks, gathering for large lakefront parties and generally acting like they deserve to be frightened by a 27-foot-long red-eyed frog.

By removing Cha! Cha! from atop the Rainforest Cafe and attaching it to a hydraulic arm mounted to a tractor-trailer bed, Mayor Lori Lightfoot could preserve one of the city’s most-beloved landmarks and use it as a Mobile Frog-Based Jerk-Terrifying Machine (M.F.B.J.T.M.).

Any time people are congregating in large groups, not wearing masks or respecting social distancing rules, the M.F.B.J.T.M. could pull up and stealthily plunge Cha! Cha! down next to the crowd, scaring some sense into them.

If a bar or restaurant isn’t following city coronavirus restrictions, Cha! Cha! could be temporarily placed outside the establishment. The frog’s giant red eyes would peer menacingly through the windows, unnerving customers enough that they clear out.

With a little innovation, Cha! Cha! could be the city’s best ally in the fight against the coronavirus.

Idea 2: Replace one of the lions outside the Art Institute of Chicago with Cha! Cha!

I know this will be controversial, but let’s be honest. The dual lions “guarding” the museum have been there since they were unveiled in 1894. It’s way past time to shake things up, and in this economy, it seems a bit extravagant to have two lions.

A giant tree frog would add a much-needed “WOW!” factor to the front of the Art Institute, and it would entertain those who don’t particularly care for art. Also, at Christmas, the frog’s bright red eyes would mix perfectly with a massive green wreath around its neck, or whatever frogs have that is the equivalent of a neck.

Idea 3: Install Cha! Cha! on one of the city’s water cribs in Lake Michigan.

This is arguably the best idea. The water cribs that protect Chicago’s offshore intakes on Lake Michigan are visible from the shore, and it would be OUTSTANDING to occasionally see a tourist look out at the cribs and say, “Hold up, is that a giant frog out there?”

I mean, really, you can’t buy that kind of entertainment. It would be a wonderful way to preserve Cha! Cha!‘s important legacy.

Idea 4: Rent Cha! Cha! out to Chicagoans who want to protect their shoveled-out parking spaces.

I don’t generally approve of for-profit historic preservation efforts, but this is a surefire way to turn Chicago’s most-beloved 27-foot-long tree frog into a cash cow.

Once the snow arrives, city residents who use street parking outside their homes could use a website to bid for the right to “borrow” Cha! Cha! and use the giant frog to keep scoundrels from using their carefully shoveled spot. The frog’s size would allow neighbors to go in together on a bid and preserve two spots at a time.

It’s easy for disrespectful parkers to move a lawn chair or sawhorse and steal a spot. Relocating a giant Rainforest Cafe frog is a whole other kettle of Aloha Salmon & Shrimp.

So let’s do this, Chicago. Let’s not let our humongous bug-eyed tree frog be lost to the pages of history.

This has been a rough year. We need to save Cha! Cha!

Barcelona's Interest in Isak Increased after Koeman's appointment. Larsson has a high opinion of the player (Mundo Seportivo)
Manuel Pellegrini: When you play against Real Madrid and var, it's too much
PSV and Porto are Interested in Barcelona midfielder PUC. He doesn't want to leave the club
Puyol about Barcelona: If we want to win the championship, we need to perform very well
Schalke sacked Wagner. The team has not won the Bundesliga since January
Iacini on 3:4 with Inter: Even a draw would be an unfair result, given how many chances Fiorentina created
Ramos Pro 3:2 with Betis: the Referee tried his best and didn't do anything intentionally
Source https://www.chicagotribune.com/columns/rex-huppke/ct-coronavirus-chicago-rainforest-cafe-frog-huppke-20200814-ggfdivvq5vgunisbzjyk6uopqa-story.html#ed=rss_www.chicagotribune.com/arcio/rss/category/news/

49ers' Nick Mullens explains why he fixes the toppled-over pylon

Sunday Night Owls. driftglass: Let the creators of our disaster off the hook and they'll do it again

Brad Parscale, Ex-Campaign Manager for Trump, Is Hospitalized in Florida

Andrew Cuomo has gone loco on crime and vaccines

The biggest Giants concerns to emerge from nightmarish day

Ohtani wants to remain 2-way player for Angels in 2021

Xi Jinping and Vladimir Putin are a pair of total liars

Falcons blow another big lead, this time to Foles and Bears

Boy, 9, slashed by another youngster at Crown Heights playground

Face facts, Gov. Cuomo: Your lockdowns cause deaths, too

U.S. Judge Halts Trump's TikTok Ban, Hours Before It Was Set To Start

Corey Lewandowski on Barrett attacks: 'We should see more women' supporting her

Indians rally past Pirates, will host Yankees in playoffs

Trump slams media’s treatment of Barrett’s Catholicism: ‘I thought we settled this’ with JFK