It was Thanksgiving eve, 1971, when a mystery man known only as Dan Cooper hijacked a commercial airliner out of Portland International Airport. He sat in the last row of seats on the plane, where he slipped a note to the flight attendant, informing her he had a bomb in his attaché case. He demanded a $200,000 ransom and four parachutes, which were delivered to the craft on the tarmac. Once in the air, he instructed the pilot to fly low, at 10,000 feet, then jumped from the 727 somewhere over the rugged Pacific Northwest, leaving behind one of the most enduring whodunits in modern history. Who was D.B. Cooper? And did he make it out alive?

The only unsolved airline hijacking in American history is the subject of HBO’s new documentary film “The Mystery of D.B. Cooper,” which premieres Wednesday — 49 years to the day since the high-flying heist. The film constructs a compelling narrative from a story that’s been told, retold, scrutinized, picked apart and sewn back together with new bits of real and imagined information ... hundreds if not thousands of times.

Spoiler alert: This film by director John Dower (“Thrilla in Manila,” “My Scientology Movie”) does not break the case wide open like, say, “The Jinx: The Life and Death of Robert Durst” did the death of Susan Berman, for which Durst now stands trial in Los Angeles. In fact, it doesn’t reveal much of anything new for investigators or true Cooper enthusiasts to chew on.

“The Mystery of D.B. Cooper” instead dissects an equally fascinating slice of the story: why we still care about this unidentified criminal, his bizarre scheme and every minute detail of that night, right down to the cigarette brand he smoked (Raleigh filtered) and his seat number (18C, 18E, or 15D, depending on who’s spinning the tale). 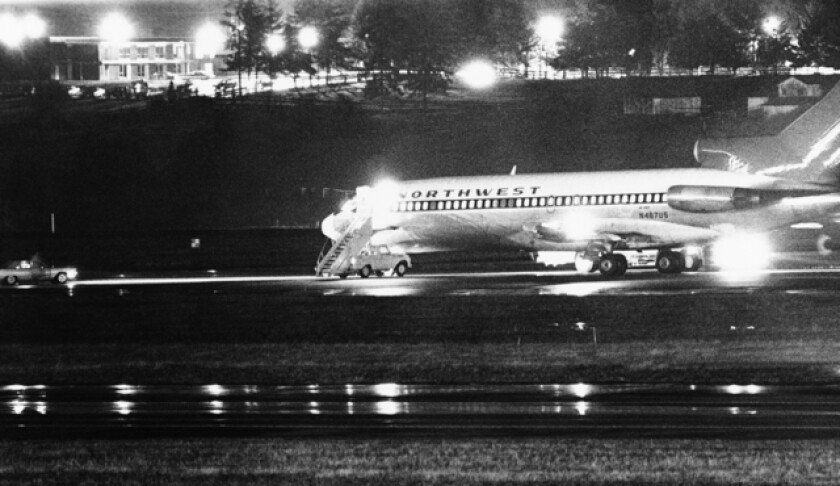 The hijacked Northwest Airlines 727 sits on a runway for refueling at Tacoma International Airport on Nov. 25, 1971.

Cooper first jumped into the nation’s psyche when regular folks were watching their chances at the American Dream slip away. The post-recession unemployment rate was hovering around 6%. The Vietnam War raged on. A drop in airline production, aka the “Boeing bust,” was in the process of decimating Seattle’s aerospace industry and its workforce. People were war-weary and hurting for money — and The Establishment didn’t appear to care.

Cooper tapped into that disillusionment, capturing America’s collective imagination after a massive manhunt failed to find him. Many believed he beat a system that was beating him, or at least died trying. He became a hero for cynical times, a symbol of sticking it to the man. No wonder we’re still fascinated.

Coming on the heels of multiple podcasts and History’s “D.B. Cooper: Case Closed?,” HBO’s treatment of the evergreen saga remains fresh, fun and all-consuming. The film delivers a prismatic retelling of the Cooper saga through four of the case’s prime suspects, all of whom are now deceased. They include a transgender pilot, a charismatic grifter, a beloved uncle and a supposed copycat criminal. Some people claimed they were Cooper on their deathbeds. Others were suspected by friends and family. One was killed by an FBI agent.

Acquaintances and relatives of the suspects spin fascinating tales about these people of interest. The stories are woven together into a larger narrative that includes interviews with several members of the original airline crew of Northwest Orient Airlines Flight 305, a passenger who sat near the hijacker, multiple former FBI agents, and plenty of amateur sleuths who’ve spent the better part of their life trying to solve the riddle of D.B. Cooper.

These obsessives search for shreds of parachute in the dense forests of the Northwest, remnants of buckles or metal from his harness and, of course, any trace of the money. The last gripping clue was discovered in 1980 by a 9-year-old boy on the banks of the Columbia River. He found what amounted to $5,800 in $20 bills, bound by rubber bands and badly decomposed. The serial numbers matched those from the ransom money. There’s been nothing as concrete since. 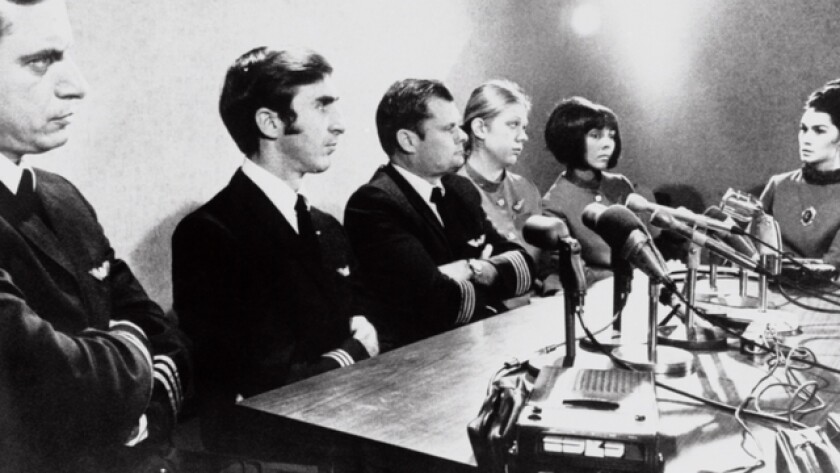 Pop culture has stepped in where investigators have fallen short, filling in the blanks with true and fictionalized accounts about the fate of D.B Cooper.

Nearly half a century’s worth of books, TV shows, comics, films, songs and festivals have been devoted to completing the puzzle or have played off the myth of Cooper, a phantom who’s enthralled since Nixon was in office. Leonard Nimoy’s “In Search Of” TV series took on Cooper in the ’70s, right alongside episodes devoted to the Bermuda Triangle and the Loch Ness monster. Treat Williams played Cooper, and Robert Duvall the insurance investigator who pursued him, in 1981’s feature film “The Pursuit of D.B. Cooper.” In the 1990s, “Twin Peaks” knowingly flicked at the mystery while Kid Rock rapped about Cooper.

Staring back at us the whole time, almost mockingly, is the FBI’s original facial composite sketch. Cooper is the picture of a ’70s businessman on the go: He wears a dark suit, black tie and white button-down shirt. His thinning hair is combed neatly to the side. His thick-rimmed, dark sunglasses look like something out of a Tarantino film.

That aesthetic might explain why some “Mad Men” conspiracy theorists, bloggers and fans came to believe that Don Draper (played by Jon Hamm) would be revealed to be D.B. Cooper, and pointed to clues in the series as evidence. (Creator Matthew Weiner dismissed the idea.) But it wasn’t that much of a stretch considering that real-life witnesses to the hijacking recalled the perpetrator chain-smoking, drinking whiskey, and possibly flirting with the stewardess.

The FBI officially put the case to bed in 2016, which of course ignited a new wave of interest in the 20th century outlaw who dropped from the sky. With HBO’s new film, the mystery continues — as does the need for something or someone to believe in when the system has got you down.

‘The Mystery of D.B. Cooper’


Where: History
When: 5 p.m. Saturday
Rating: TV-PG (may be unsuitable for young children)

Dwight Yorke: Salsero very jealous. For some reason, people do not want him to succeed at Manchester United
Atalanta is demanding 15 million euros for Gomez. Sevilla want to reduce the price
Liverpool's priority is van Dijk's new contract, not Salah's. The defender will have the biggest salary in the club
Willian Jose moved to Wolverhampton from Sociedad on loan with the right to buy
Perez demands that Hakimi return to Real Madrid if Inter do not guarantee the transfer fee
Lampard on Havertz: De Bruyne and Salah were the same age when they came to Chelsea. They went away, came back and became legends of the Premier League
Ronald Araujo: Barcelona will fight to win La Liga. We know the results will come
Source https://www.latimes.com/entertainment-arts/tv/story/2020-11-25/hbo-db-cooper-mystery-thanksgiving-documentary

Got a package you didn't order? It could be a scam

The youngest mourners: Children who have lost a parent to Covid-19

How 'vaccine nationalism' could prolong the Covid-19 pandemic

How one mother is building generational wealth for her young son

Newt Gingrich: Biden says one thing, does the opposite

History teachers revisit their curriculum after the Capitol riots

Trump's lawyers must get 72-hour warning if Treasury turns over president's tax returns to Democrats: judge

What 'vaccine passports' mean for your summer vacation

A Decade On, Silence Fills Egypt’s Field of Broken Dreams

Financial Aid: Grades, Merit and Talking to Kids About Paying for College

If Poor Countries Go Unvaccinated, a Study Says, Rich Ones Will Pay

In Crises, Vaccines Can Be Stretched, But Not Easily

Two Years After Legalizing Cannabis, Has Canada Kept Its Promises?

How Alvin the Beagle Helped Usher in a Democratic Senate

Do Curfews Slow the Coronavirus?

Al Downing, the Pitcher for Home Run No. 715, Reflects on Hank Aaron

Is President Biden Ready for the New Senate?

Now that Biden's given many of us back our sense of hope, what's next?

Star Wars extends support for Krystina Arielle: "We do not stand for bullying and racism"

KBC: Netizens lashes out at Big B for sexist remark, Gita Gopinath for appreciating it

Caught on cam: Dog run over by producer's car, FIR lodged but no arrests made

Column: Mahomes ‘cleared’ for big game. What could go wrong?

Fauci gushes over Maddow and hints that Trump ‘blocked’ him

Chiefs’ Mathieu making most of opportunity in Kansas City

Character concerns go beyond PEDs in this Hall of Fame vote

Kings’ Tyrese Haliburton makes Knicks pay for passing on him

Florida teen gets 45 years, convicted of strangling mom after argument about school grades

Doncic and the Mavericks host the Rockets

Brooklyn puts home win streak on the line against Miami

Guard in DC forced to sleep in garages, sparking outcry

New Pandemic Plight: Hospitals Are Running Out of Vaccines

10 Republicans Voted to Impeach Trump. The Backlash Has Been Swift.

The N.W.H.L. Is Coming Back, for Two Weeks Only

Second downhill in Kitzbühel canceled due to rain, snowfall

Trump shuns ‘ex-presidents club’ — and the feeling is mutual

Donald Trump Jr. Gets A Blunt Reminder As Latest Boast About His Dad Backfires