Coronavirus lockdown sparks a surprising backlash against otters in Singapore, the 'Otter City'

Life was already hardscrabble for the seven river otters known as the Zouk family.

Prime land next to Singapore’s sparkling waterways brimming with fish had been seized by other clans, forcing the hapless group to wander the city-state each day in search of food and shelter. But few noticed their forays until a coronavirus shutdown known as the circuit breaker was imposed in April.

With the streets nearly emptied, the Zouks — named after a local nightclub — started appearing in unexpected places: splashing around in a luxury condominium pool, taking a break outside a usually teeming shopping center in Little India and trying to cut through the lobby of a children’s hospital.

It all seemed rather harmless. But calls for a crackdown on the otter population began when the Zouks raided a private pond stocked with expensive ornamental fish on the grounds of a spa owned by a former actress.

“The otters killed all the fishes in the pond,” Jazreel Low wrote in a Facebook post punctuated by a sad face emoji and what looks like a surveillance camera image of four otters skipping through her temporarily shuttered business. Low later posted a picture of her 13-year-old arowana, Ah Huat — meaning “to prosper” — in better times.

“Darn otters! They gotta pay for it!” wrote one sympathetic commenter.

Within days, there were calls on social media and a radio program to cull the slippery animals. A widely shared letter published in the local Straits Times recommended deterring otters with air horns and rubber bullets.

“Wild boars have never been encouraged to enter urban areas, neither should otters be just because they look cute,” wrote Ong Jungkai, an aquaculture products salesman.

It was a harsh response, one that otter lovers reasoned was amplified by the desire to discuss (or complain) about anything other than the coronavirus. It was also unanticipated. Singapore seemed a city captivated by the cuddly creatures — a model of coexistence with urban wildlife. 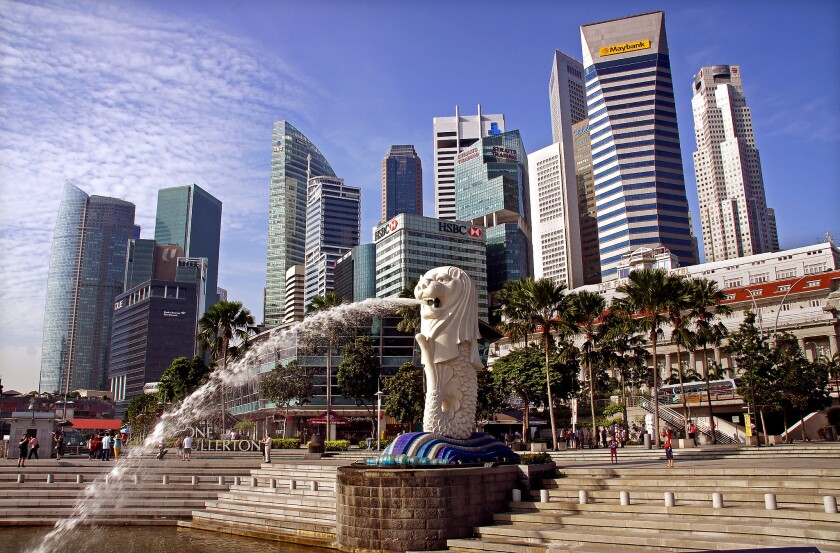 Water streams from the Merlion, Singapore’s mythical mascot, in a park near the central business district.

Ever since 2014, when they started appearing in Marina Bay — the waterfront famed for its Merlion and Marina Bay Sands hotel — the otters have been treated like celebrities in a metropolis otherwise known as the Lion City.

When asked to vote for a mascot to represent Singapore during its 2016 National Day festivities, citizens overwhelmingly chose the otters.

The animals have been given the David Attenborough documentary treatment and have spawned a number of fan pages, including the closely followed Ottercity, a nerve center for the bands of local enthusiasts who track the animal’s movements.

When the patriarch of a beloved family of otters known as the Bishan 10 died in 2018, mourners drew anthropomorphic lessons from the life he led.

“The Bishan dad was able to keep the family together. When he passed away, there was a lot of reflection among otter watchers about our own lives and our own accomplishments,” said Sivasothi N., a biologist at the National University of Singapore, better known as the Otterman because of his expertise with the animals.

Something about the otters’ lifestyle provokes envy among Singapore’s high-achieving and high-strung society.

“They are exactly who we want to be,” said Jeffrey Teo, Asia Pacific managing director of a French financial services firm and the founder of Ottercity. “They spend time with family. They like to swim, eat good food and do a little sunbathing.”

The fact the otters are even found here, in one of the densest cities in the world, provokes astonishment. Most species of the semiaquatic animal live solitary lives.

But Singapore’s prevalent otter, the smooth-coated variety, is unusually social. They swim by row boats, roll in the grass next to tourists and take dips in reservoirs, whose banks double as jogging paths. 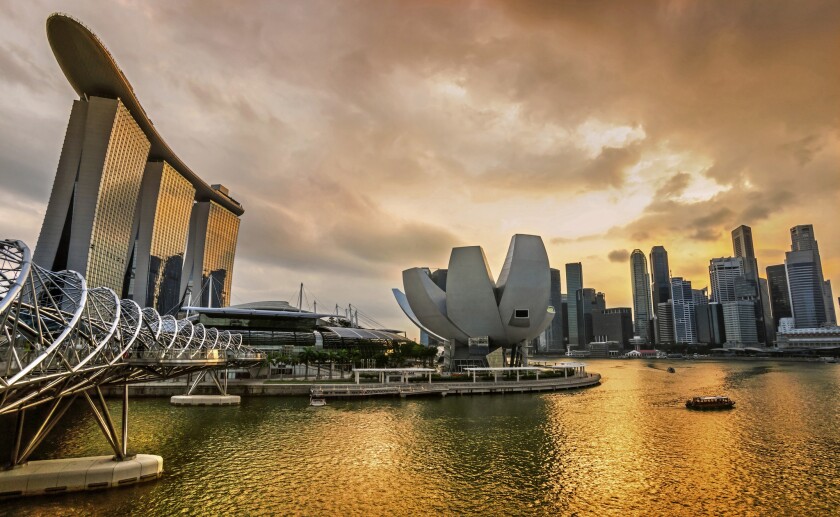 The dramatic Singapore city skyline at sunset, with the striking Marina Bay Sands Hotel to the left, three towers with a Skypark atop them.

“We have the best otter-watching conditions in the world, no question about it,” said Philip Johns, a biologist at Yale-NUS College, who was so taken by the animals when he arrived in Singapore from the U.S. in 2015 that he abandoned notions of studying colugos, a gliding nocturnal mammal that looks like a cross between a bat and a lemur.

“Evolutionarily speaking, colugos are fascinating,” Johns said. “But they mostly sit in trees and do nothing. Otters are like wolves. They’re like coyotes in water.”

Once thought extinct here, like the Malayan tiger, the otters began reappearing in the 1990s in less urbanized corners before capturing everyone’s attention in Marina Bay.

Their return is due in part to a massive clean-up of Singapore’s rivers that began in the 1970s. Dredging of the river bottom muck turned up dead pigs, dogs and chickens. You could smell some rivers before you saw them. But the restored waters brought back an otter banquet: tilapia, catfish and all manner of exotic species, such as the yellow-hued Orinoco peacock bass.

It’s more than dining, though, that makes Singapore optimal for otters. The diamond-shaped island — roughly the size of the San Fernando Valley — is etched with a network of drains and canals that form a “subway system for the otters to move around really, really quickly,” Johns said.

Mobility is paramount. Otters are fiercely territorial. And now that Singapore’s otter population has grown to about 90 animals belonging to 10 families, clashes for choice river banks and fishing waters have grown too.

At first, Singaporeans were horrified that the furry critters were capable of such ferocious fighting. Some tried to break up squabbles with umbrellas.

Battles often begin with a cacophony of squeals that can escalate into fits of biting. Pups are the only casualties, often drowned and found floating. About 10 otters died in Singapore last year from a combination of fighting and vehicle collisions.

The Zouks were first driven from a part of the Singapore River. They ended up in the Botanic Garden but its shallow ponds didn’t provide enough fish to raise a family. That’s when the Zouks hit the road.

Their spa jaunt this month wasn’t the first time otters had made headlines for munching on pets. In 2016, local media reported otters ate tens of thousands of dollars’ worth of exotic fish from private ponds on exclusive Sentosa Island.

Otter experts suggest building more constrictive fencing and opting for smaller pet fish, which aren’t worth the otters’ attention. Having a security guard on hand couldn’t hurt either.

That doesn’t satisfy critics like Ong, the author of the letter to the Straits Times, who is convinced more Singaporeans would demand stricter management of the urbanized otters if they weren’t scared of a backlash.

“Talking about controlling them in any way is bound to draw negative comments based on emotional response,” said Ong, 38, who has an educational background in biology and biomedical science. He cited an incident in 2017 when an otter bit a 5-year-old girl’s foot at Gardens by the Bay.

“They have been pampered too much,” Ong said.

The official mantra in Singapore is to watch the animals from a distance. Otters don’t react unless they feel threatened.

An official at the National Parks Board said mitigation efforts, such as erecting barriers, were working.

“Most problems are easily solved,” said Adrian Loo, who heads wildlife management for the agency.

Otter watchers such as Teo think the backlash has been overblown. Social media, he said, is showing more sympathy for the animals. About 90% of Singaporeans live in public housing, not the multimillion-dollar detached homes that can support fish ponds.

With the coronavirus lockdown likely stretching into July, Teo and his cohorts are finding it difficult to keep track of the otters.

The last time the Zouk family was spotted was earlier this week, back in the Botanic Garden.

“These guys are survivors, they’re explorers. It’s a totally new level of inspiration,” said Teo, 49, who ordinarily begins each day photographing otters at 6:30 a.m. before heading to work.

“Sadly, I don’t think there’s any upside for them,” he added. “They’re just going to keep running around and crossing streets. When the circuit breaker eases up, cars are going to return to the road. I’ve seen too many accidents.”

APL presented a calendar until July 2. Manchester City and Liverpool will play on this day
Wesley Sneijder: I Could have been like Messi or Ronaldo, but I didn't want to. I enjoyed life, they sacrificed a lot
The bus with the Benfica players was pelted with stones. Two football players were injured
Lillo will become Guardiola's assistant at Manchester City. They had already crossed paths in Mexico
Messi has a slight quadriceps injury. Lionel and Fati trained individually
Simeone's assistant, nicknamed the Monkey, begins a solo career. He was super successful as a substitute for Cholo, and also played rock
Manchester United are Interested in Benfica midfielder Florentino. They call it the Octopus
Source https://www.latimes.com/world-nation/story/2020-05-23/singapore-otters-backlash

Ryan Williams, a 32-year-old black CEO, says America has been 'hallucinating' about racism and inequality. Until now.

Family of 6 found dead in vehicle in San Antonio garage

George Floyd fallout: As grocery stores and other businesses struggle to reopen, Chicago says it will start sending ‘emergency alerts’ to them

Grocery stores that closed during the George Floyd fallout start to reopen. But food remains elusive in some neighborhoods.

21-year-old describes being stabbed while trying to stop looting in Naperville. ‘I really don’t like where this world is going to. It’s going to a dark, evil place.’

Over 1,000 coronavirus deaths reported in the past 24 hours. Officials fear protests will drive up numbers

Exclusive: He quit his Facebook job because of Zuckerberg's inaction on Trump's posts

Where Police Reform Has Worked

Why is Sudeep not a part of Yash, Darshan, Puneeth starrer song Badalaagu Neenu?

Hubballi in Karnataka to get world's longest railway platform

Wearing a mask isn't political. It could protect my son's life

Ex-Swedish envoy on trial for alleged contacts with China

BBC Names Tim Davie As Its Next Director General

Congresswoman: Police reform package will be about "accountability"

Commentary: Under fire for protest coverage, local TV news tries to learn from its mistakes

The Walk of Shame for Republican Senators

Swimming, s'mores and social distancing: Is summer camp during the pandemic worth it?

The Stories of Five Protesters

Latinos have the highest COVID-19 infection rate in Illinois. As restrictions ease, community leaders fear things will get even worse.

Dear Care and Feeding: My Perfectionist Wife Keeps Doing Our Kids’ Chores for Them

Why Prosecutors Keep Letting Police Get Away With Murder

As George Floyd is honored, pressure mounts on police - and Trump

The Police Have Shown Their True Colors

States Have Put 54 New Restrictions On Peaceful Protests Since Ferguson

Biden Is the Favorite

How wild swimming saved my life

Student raped and killed in church wanted to become a minister and 'preach the word of God,' sister says

Chennai's posh Boat Club, which is home to rich and affluent, was meant for poor and homeless

Nationwide Protests Over the Death of an African American Man Continue

Trump vows to help oust GOP senator after criticism: 'Get any candidate ready'

Friday Funny: Do You Really Want to be an Engineer?

Forbes highest paid celebrities 2020: Akshay Kumar, the only Indian celeb to make it to the list

Being Black In America: 'We Have A Place In This World Too'

As Trump Heads To Maine, GOP Sen. Susan Collins Won't Be There To Greet Him

Will the Pandemic Cost Teachers Their Pensions?