Could it happen here? US ports are safer than Beirut, but dangerous cargoes present constant risk â€” no matter the location

Those who wonder whether a chemical explosion like the one that leveled the port of Beirut, Lebanon, and killed more than 100 could happen in the U.S. should consider what happened one spring day in 1947 in the port of Texas City, Texas.

Cargo in the hold of the freighter Grandcamp started smoking. Flames erupted and a blast so powerful that it could be heard more than 100 miles away destroyed the ship, docks and an adjoining Monsanto chemical plant.

The explosion killed more than 500 people — the exact number was hard to determine because many bodies couldn't be recovered — making it one of the worst industrial accidents in U.S. history. The chemical product that exploded on the ship was the same as the one in the Beirut warehouse, ammonium nitrate, which is used in fertilizer.

The accident underscores the point that U.S. ports aren't immune to the kind of destruction that was wrought a half a world away in Beirut. 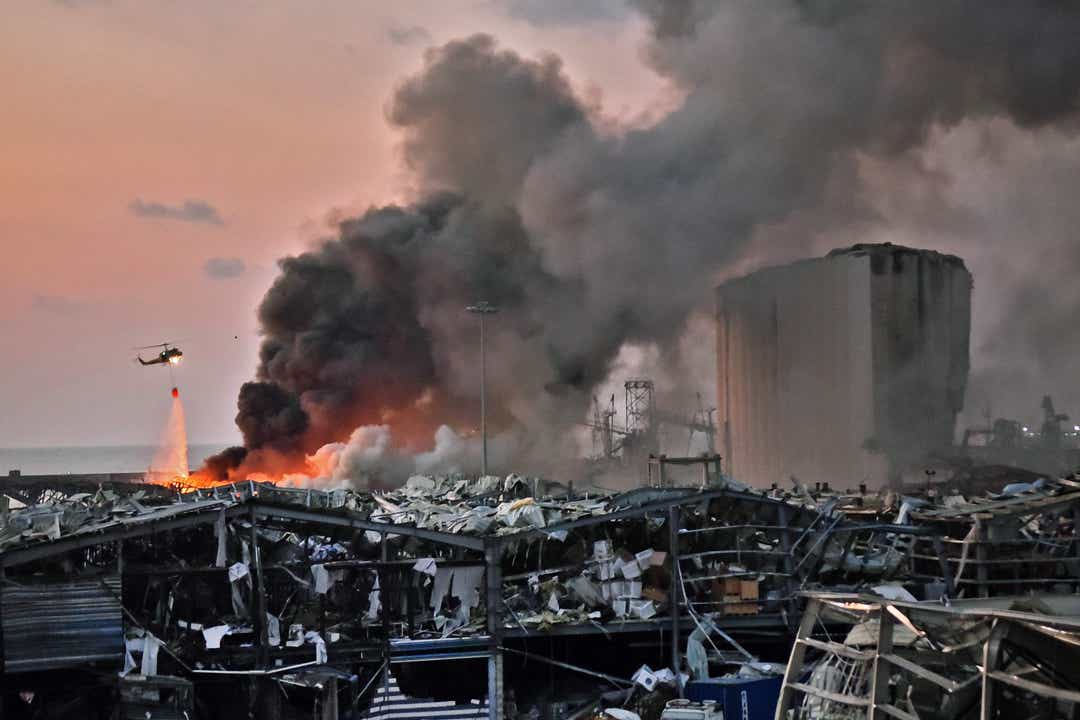 In ports, threats come in all forms. Potentially explosive cargo may be petroleum, liquified natural gas, chemicals or something else. Fire or an explosion can occur in a single container or in a supertanker. On land, it can be in a storage facility, a huge refinery or another industrial complex that's part of the port complex.

But port officials say the public should have little worry. In the U.S., transportation of all those cargoes is covered by myriad federal and state regulations. And those laws are backed by a web of inspection agencies, the Coast Guard being chief among them.

'Glass caked the road like ice': Reporter reflects on Beirut explosion, burying a dog who made 'dystopia more bearable'

U.S. ports are generally modern, having long torn down the warehouses like the one in Beirut. The emphasis is on moving containers directly from the ship to ground transport as quickly as possible, cutting out the warehouse wait. Warehouses were raised to make way for railroad tracks or other container processing space.

Port officials in the two of the nation's busiest ports say safety is always the top priority.

"We will do whatever we can to mitigate risk," Mario Cordero, executive director of the Port of Long Beach, California, told USA TODAY. "We have a 100% effort to implement appropriate firewalls to mitigate anything that can happen."

He added that the port built a new security center to coordinate with the various agencies that have jurisdiction for port security, from the Coast Guard to FBI, and has taken additional steps like having two large, modern fireboats. "We are very proud of our safety record but on the other hand, we're vigilant," Cordero added.

Beirut explosion: How to help to the victims in Lebanon

On the opposite coast, Sam Ruda, port director of the Port of New York and New Jersey, said his agency approaches hazardous cargo with the same high priority.

"The Port of New York and New Jersey takes dangerous goods extremely seriously," Ruda said in a statement. "The port has regulations and fire safety protocols in place limiting the types and amounts of those materials that may be stored, used or transferred through port facilities."

The port says that any cargo considered dangerous is subject to Coast Guard inspection, is segregated from other goods and kept in small amounts.

The goods must be stored within 500 feet of a fire extinguisher. The port also says it doesn't take dangerous cargoes in bulk. 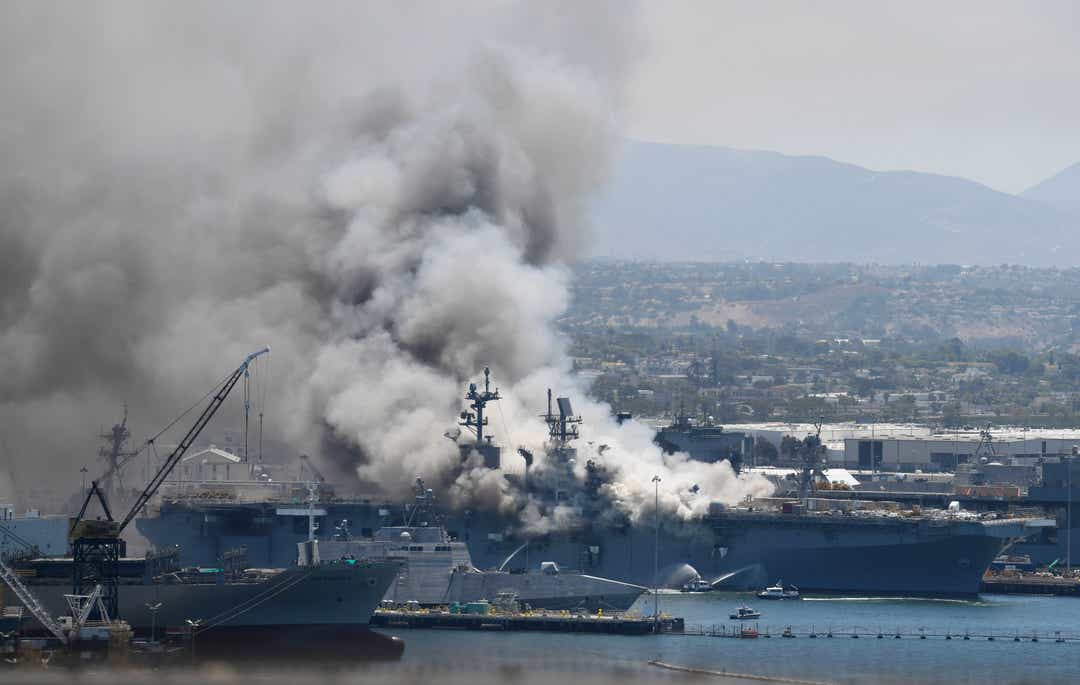 But the hazards that come with ports became national news last month when fire broke out aboard the USS Bonhomme Richard as the amphibious assault ship underwent maintenance at a San Diego pier.

Ship explosions cause major damage. The tanker Sansinena blew up in Los Angeles harbor in 1976, breaking the ship in two, a blast that broke windows in the residential area next to the port, San Pedro. It was felt 20 miles away.

The most deadly ship explosion?

It occurred 103 years ago in Halifax, Nova Scotia, when a French ammunition ship, the Mont Blanc, blew up after catching fire in the collision with another vessel. The blast. coming during World War I leveled much of the city, killing 1,800 and wounding 9,000.

But Texas City's agony would be repeated again nearly a century later.

Zidane on Jovic's future: anything can happen. I can't say anything until the window closes
Flick on Bayern's Interest in Kramaric: I know him well, but I haven't heard anything about it
We have three clubs in this group stage of the Champions League. How did campaigns with two end up?
Solskjaer on transfers: No news. Working with what we have, Manchester United have a big squad
Guardiola confirmed that Zinchenko will stay at Manchester City
Bayern won 5 trophies in a year. To repeat the record Barca need to take another
Flick took 5 trophies with Bayern after 40 matches
Source https://eu.usatoday.com/story/news/nation/2020/08/06/beirut-explosion-us-ports-safety/3302761001/

Shooter opens fire inside Nashville mall, at least one injured

FSU cancels spring break after 1,000-person party over the weekend

Wisconsin school worker jailed for exposing herself to student

By learning to think like a puffin, this conservationist has saved seabirds around the world

Carlos Correa defiant after Astros’ sweep: ‘What are they going to say now’

Fauci Pushes Back at Trump for Misrepresenting His Stance on Masks

Brad Parscale resigns from Trump campaign after hospitalization in Florida

China contained Covid-19. Now, hundreds of millions of people there are about to go on vacation.

Remember East India Company? They usurped India once, an Indian owns it now

The Infodemic: 1 in 1,000 Black Americans Have Died in the Covid-19 Pandemic

‘The 100’ Series Finale: Creator Jason Rothenberg On Tonight’s Surprises & Who Might Return For The Prequel

‘The 100’ Series Finale “The Last War” Recap: Who Lives, Who Dies & Who Transcends

COVID-19 clusters in NYC growing at an alarming rate

Rangers owner hoped for Series in new park — with his team

'I Like What I See': FAA Chief Flies 737 Max, But Not Ready To Recertify Plane

Truck swerves off a road through patio, before landing in backyard swimming pool

Fact check: Almost every single one of Trump's debate claims about mail-in voting was wrong

Neanderthal genes may be to blame in some severe coronavirus cases

No, the Recession Isn’t Over—and It’s About to Get Much Worse for Some

Spend a night as the "mayor" of Hell, Michigan

Facebook will forbid ads that undermine the legitimacy of the coming election.

Trump Calls on Extremists to ‘Stand By’

Brad Parscale resigns from Trump campaign after incident at home

How Trump torpedoed the presidential debates

China contained Covid-19. Now, hundreds of millions of people there are about to go on vacation at the same time

Pelosi and Mnuchin have ‘extensive’ talks on COVID relief

Consistency in the time of day you work out may keep off the pounds, study finds

Getting out the vote at the Prince George’s County jail

Thousands sign up as poll workers after LeBron James' efforts

The Proud Boys, Who Trade in Political Violence, Get a Boost From Trump

US Held Back on Belarus Sanctions, Hoping for Joint Move With EU

Changes expected for next debate after first-round ugliness

Why ‘namaste’ has become the perfect pandemic greeting

Anyone Else Want to See Trump ‘Shut Up’?

*Every* election model shows Donald Trump is a long shot