London — India's foreign minister has pulled out of in-person meetings at a Group of Seven gathering in London because of possible exposure to the coronavirus.

Indian External Affairs Minister Subrahmanyam Jaishankar tweeted that he was "made aware yesterday evening of exposure to possible Covid positive cases. As a measure of abundant caution and also out of consideration for others, I decided to conduct my engagements in the virtual mode." 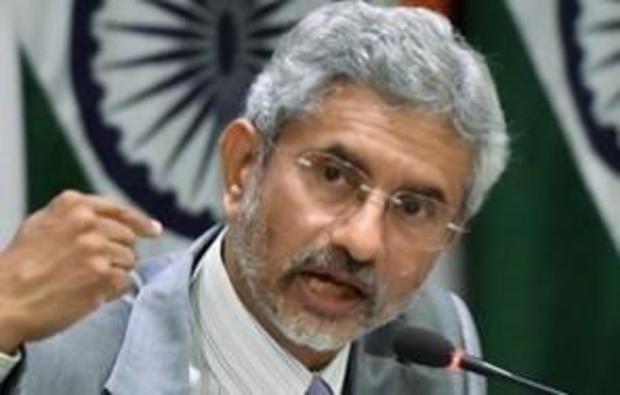 Diplomats from the G-7 group of wealthy nations are meeting in London for their first face-to-face gathering in two years. Delegates have been observing social distancing and are separated by transparent screens in meetings, and delegates are tested daily for the virus.

India isn't a G-7 member but was invited along with South Korea, Australia and South Africa as a guest for the second day of the meeting on Wednesday.

The guest nations' delegations didn't attend the conference on Tuesday, though Jaishankar has held meetings in London with officials including British Home Secretary Priti Patel and U.S. Secretary of State Antony Blinken.

U.S. State Department spokesman Ned Price said "the U.S. delegation was advised, including by the U.K.'s public health professionals, that our stringent masking, social distancing, and daily testing protocols would permit us to continue with our G-7 activities as planned."

"We have no reason to believe any of our delegation is at risk," he said.

The Foreign Office said it regretted that Jaishankar couldn't attend the meeting in person "but this is exactly why we have put in place strict COVID protocols and daily testing."

India is experiencing a vast outbreak of COVID-19, with 382,315 new confirmed cases and 3,780 reported deaths in the last 24 hours, in what is widely believed to be an undercount.

Reuters reports that the World Health Organization said Wednesday that a quarter of the reported deaths from COVID-19 globally and 46% of new cases were in India.

The second day of the two-day G-7 meeting on Wednesday was due to focus on attempts to bolster open societies and make coronavirus vaccines available around the world.

The U.K., which holds the G-7 presidency this year, is due to host the group's leaders at a summit in Cornwall, southwest England, next month.

Tennessee inmate asks court to declare he can't be executed

Wisconsin bill would require national anthem before sporting events: 'We are still one country'

Bethenny Frankel Doesn’t Want To Be Your Girlboss

Psaki on Cheney’s Ouster: ‘Disturbing To See’ a Leader ‘Attacked’ for Speaking the Truth

Bill Gates Is Reportedly Hiding Out in His mansion at a Billionaires' Golf Club in California That Costs $250,000 to Join

Jack Dorsey's $2.9 million NFT tweet sale may be only the beginning

Still filing taxes? Here's what you can do to avoid a refund delay

‘Just Snap My Fingers’: Biden Jokes About How He Will Reach Compromise on Infrastructure

The Mob Comes for Liz Cheney

Derek Chauvin could get longer sentence for acting with ‘particular cruelty’

Texas should be unaffected by pipeline shutdown

5 Art Shows to See in and Around NYC This Spring

The 9/11 rescue that we need to hear more about

Why is one of Cuba's most rebellious artists still isolated in a government hospital?

Here's what you can do to avoid a tax-refund delay

AG Garland says Jan. 6 insurrection was 'most dangerous threat to our democracy'

Michelle Obama opens up about coping with depression: 'Don't wallow in your low'

‘This Is Us’ Season 5, Episode 15 Preview for Next Week

‘Mom’ Will Sign Off With a Message About ‘Hope and Redemption’

Business lunches are back. And they're longer and boozier than ever

Pelosi, Democrats celebrate Cheney after her ouster, say GOP must 'take back' their party

19 must-have sunglasses to rock this summer, according to style experts

As the GOP implodes, Biden governs

‘I have reassessed’: Former Pentagon official now says Trump may not have incited riot

Who owns the Colonial Pipeline? It's complicated

Don't Expect To See Emily Blunt Star In Any Superhero Movies: 'I Don't Like Them'

With an Influx of New Contenders and Returning Favorites, Will Emmy Season Snap Out of Its Malaise?

Your Business Might Not Actually Be Profitable. Here's How to Fix It.