This is like that episode of “The Office” where Dwight gets his head stuck in a pumpkin, only much, much sadder.

Animal control officers in Montclair, N.J. were alerted to a wildlife emergency on Tuesday, after concerned residents reported seeing a deer running through town with its head stuck in a plastic pumpkin decoration. 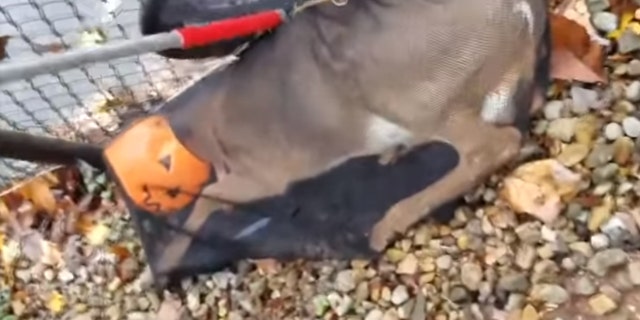 The responding animal control officers were able to capture the deer in a net before attempting to free it from the pumpkin, video shows (Montclair Township Animal Control)

The responding officers of Montclair Township Animal Control were later able to capture the deer in a net, and subsequently film their attempt to free the helpless jack-doe’-lantern from its plastic pumpkin prison.

In the footage, the deer is seen in the officers’ net, sitting motionless by a fence. But once the officers pull the pumpkin off its head, the deer begins kicking and flailing, and eventually breaks through the net on its own.

“Well, there you go,” an officer identified only as Michele says as the deer darts away into the woods.

“Teamwork make the dream work,” she adds, before both she and Shaune agree that they would be keeping the plastic pumpkin as a “souvenir.”

Oddly enough, this type of thing is not an entirely uncommon occurrence. In fact, WKYC, a news outlet in Ohio, reported on two different incidences of deer with pumpkins stuck on their heads in 2017, including one that was believed to be stuck for at least nine days.

Did you see the shape you wanted to draw? Victory twice tried to support Dzyuba with graphics in the sky, the first attempt was forbidden by the dispatcher
Aspilicueta on the match against Tottenham: Chelsea always want to be the no 1 club in London
Tebas on Messi: I Want to see Leo in La Liga as well as Mourinho, Pep, Klopp, Ronaldo
Farewell to Maradona in Argentina: there were only relatives, buried next to their parents
Maradona was buried near Buenos Aires next to his parents
Mourinho on Maradona: We can find his football on Google, but we won't find Diego there. I miss him
Fabio Capello: against such a mediocre Real Madrid, Inter could have played better
Source https://www.foxnews.com/great-outdoors/deer-head-stuck-plastic-pumpkin-decoration-new-jersey-animal

Joe And Jill Biden's Thanksgiving Op-Ed: 'We’re Going To Get Through This Together'