Dozens of ballots destroyed after fire set at Boston dropbox

The 2020 presidential election reaches the home-stretch

The FBI and police are investigating a fire that was set inside a ballot box in Boston on Sunday. The Boston Election Department said 87 of the 122 ballots were legible and able to be processed, but the rest were destroyed or unable to be counted.

Authorities said smoke was coming out of a ballot box near Copley Square early Sunday morning and firefighters extinguished the fire by filling it with water. The Boston Police Department released photos in search of the suspect wanted in connection with the alleged arson. 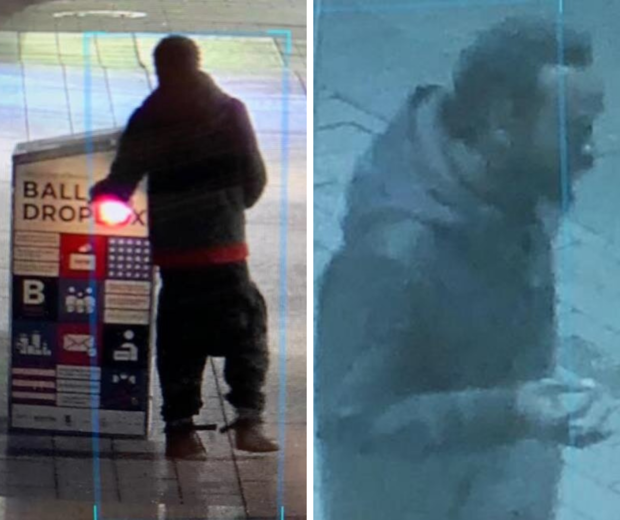 Authorities are looking for a suspect in a suspected arson of a ballot box in Boston.  Boston Police Department

Boston Mayor Marty Walsh and Secretary of State William Galvin released a joint statement on the incident and urged voters to not be "intimidated by this bad act."

"What happened in the early hours of this morning to the ballot dropbox in Copley Square is a disgrace to democracy, a disrespect to the voters fulfilling their civic duty, and a crime," the officials said. "Our first and foremost priority is maintaining the integrity of our elections process and ensuring transparency and trust with our voters, and any effort to undermine or tamper with that process must be prosecuted to the fullest extent of the law."

City officials last collected ballots at the dropbox Saturday around 2:29 p.m., according to the Boston Election Department. The department said the city would mail a new ballot to all voters whose ballots were identified in the Copley Square dropbox at the time. If those voters don't recast the ballots, the city will hand count the ones recovered.

The ballot box did not sustain physical damage and will still be available for voters.

"If it's necessary to have police officers there we need to deal with that," Galvin told the station. "The integrity of the electoral process we cannot possibly sacrifice."

FBI special agent in charge Joseph Bonavolonta and U.S. attorney Andrew Lelling asked the public in a statement to "remain vigilant and immediately report any suspicious, election-related activity to us."

It's the second time in less than a week that arson has been suspected at a ballot box in the U.S. A fire erupted in an official ballot drop box in Baldwin Park, California, damaging several ballots.

Steve McManaman: Real Madrid are an aging team. They need new players if they want to reach their previous heights
ISCO could move to Sevilla in January. Lopetegui is personally Interested
Bilyaletdinov about the Champions League: Loco can leave the group. Unmotivated Bayern can be beaten in the 6th round
Zlatan Ibrahimovic: I Thought about retiring, but I wanted to change the mentality of Milan
Vasco da Gama sports Director: Balotelli will be like Maradona for us
Real Madrid won't buy Mbappe in the summer of 2021 due to the crisis (Le Parisien)
Ibra scores in 39, Buffon drags in 42, Ronaldo has no plans to finish. Is football really getting old?
Source https://www.cbsnews.com/news/ballots-destroyed-suspected-arson-boston-dropbox/

Formula One champion Lewis Hamilton has COVID-19, will miss next race

30+ brands and retailers that are giving back this Giving Tuesday

What Biden's top economic priority must be

Weeks Late, Biden Gets His Briefings

Cyber Monday 2020 Deals You Can Still Get Today

This global airline has no passengers, no cargo and flies just one way

Fauci to Americans: Be 'part of solution' and get vaccinated

Fauci asks Americans to prepare to get vaccinated

With a month until split, Brexit trade deal hangs in balance

How South Asian American socialists are helping lead the left

Millennial Money: Be effective with your generosity in 2020

Cal Thomas: Government's assault on faith and conscience is far from over

These Latinas Were Pioneers for Workers’ Rights in the U.S. Here Are 2 You Should Have Learned About in School

Republicans fear rift in Georgia GOP amid attacks from Trump

On World Aids Day, Those Who Fought the 1980s Epidemic Find Striking Differences and Tragic Parallels in COVID-19

The Pandemic Has Broken Our Marriage. Can We Save It?

17 Books to Read This December

This Time, My COVID Patients Know How They’re Going to Die

The Latest: Germany vows that virus vaccines will be safe

Dear Care and Feeding: My 3-Year-Old Keeps Complimenting Me on My White Skin

BioNTech, Pfizer ask Europe to OK vaccine for emergency use

An Oral History of the Longest-Ever Broadway Shutdown

In another dark day for UK retailing, Debenhams set to close

Some Health Care Workers Are Wary Of Getting COVID-19 Vaccines

Biden's Coalition Was United In Beating Trump. Governing May Reveal Its Cracks

Audrey Hepburn’s son on how she coped with childhood famine during WWII: 'Her dreams kept her going'

Symone Sanders, Jen Psaki, and the Women Who Speak For Biden

Who Will Get the Coronavirus Vaccine First?

These ‘Little Land Mines’ Could Prevent a Summertime Boom

NFL Power Rankings for Week 13: Look out for the Giants

Reinventing Workers for the Post-Covid Economy

How Dinkins and Giuliani Foretold the Future of American Politics

Why the Pandemic Has Made Streets More Dangerous for Blind People

After 4 Years of Trump, Medicare and Medicaid Badly Need Attention