Elon Musk’s Chicago Tunnel: A Breakthrough or a Pipe Dream?

CHICAGO — When Elon Musk agreed this summer to build a futuristic tunnel to Chicago’s busiest airport on his own dime, many Chicagoans voiced doubt.

The idea sounded fanciful: Electric pods hurtling under the city at 150 miles per hour. And experts questioned whether Musk’s company could dig a 17-mile tunnel in a few years.

Then Mayor Rahm Emanuel, the tunnel’s main supporter, stunned Chicago this month by announcing that he would not run for a third term, casting more doubt over the project’s future. A few days later, Mr. Musk, the chief executive of the electric-car maker Tesla, came under scrutiny for apparently smoking marijuana during an interview. The episode followed a summer of turmoil that led to the resignation of the company’s chief accounting officer and raised questions over Mr. Musk’s emotional state.

Mr. Emanuel and Mr. Musk insist the project is moving forward and technically feasible, but some transportation experts say it is unlikely to happen, and if it does, will take longer than promised. Even if Mr. Musk’s engineers can dig a tunnel faster than other companies, his pod system, which the entire project is based on, is still a work in progress.

“There’s an air of unreality to the project,” said Joseph P. Schwieterman, a public policy professor at DePaul University in Chicago. “There are so many challenges that have to be overcome.”

A spokeswoman for Mr. Musk’s tunneling outfit, the Boring Company, declined to comment on the Chicago project or the doubts about its feasibility. But Mr. Emanuel says the project is “absolutely” still happening. He is betting that Mr. Musk, who has sent rockets into space, can pull off another marvel, this time underground.

“We’ll get all the pieces aligned so it’s on cruise control to keep going,” Mr. Emanuel said in a recent interview, noting that he had eight months left in office and that Mr. Musk is expected to start digging next year.

The goal is a 12-minute trip to O’Hare International Airport from downtown Chicago for $25 or less — an improvement over the current 40-minute “L” train trip. But the faster ride, in a transparent “electric skate” that would fit as many as 16 passengers, has not operated anywhere before.

Mr. Musk agreed to cover the $1 billion estimated price tag, though some have knocked the high price that riders would be charged, saying the line would cater to the wealthy. 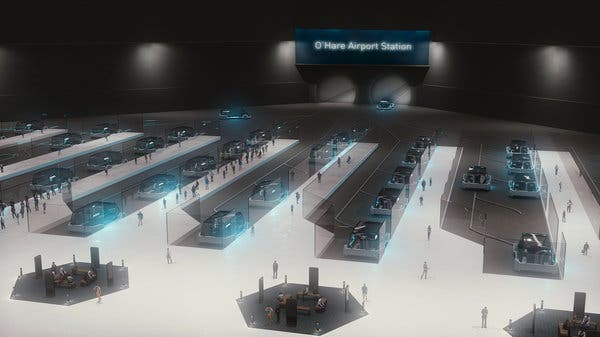 A rendering of the ambitious high-speed underground transit system that Mr. Musk has proposed for Chicago.CreditThe Boring Company, via Associated Press

Mr. Musk’s foray into tunnels is part of a flurry of proposals nationwide by private companies that sound more like something out of the animated television show “The Jetsons”: driverless cars, pilotless airplanes, flying taxis, magnetic levitation trains and electric scooters. As cities across the country are grappling with terrible traffic and wilting infrastructure, Silicon Valley has become enamored with fixing transportation.

“It is an amazing and dynamic time,” said Robert Puentes, the president of the Eno Center for Transportation in Washington. “The pace of change is more rapid than anything I’ve seen in my career.”

Still, the spate of new ideas has made it difficult to know what is doable and what is not, like a “traffic-straddling bus” in China that was mired in scandal.

“It’s very hard to sort out the reality from the hucksterism,” said Jon Orcutt, a director at Transit Center, a research group in New York.

At the same time, the astronomical cost of building rail lines in the United States has made it difficult for cities to embark on new projects. The Second Avenue subway, which opened in New York last year, cost $2.5 billion for each new mile of track — far higher than elsewhere in the world. Huge projects to move roadways underground in Boston and Seattle have been behind schedule and over budget.

For the Chicago tunnel, the list of challenges and unanswered questions is long, prompting the Better Government Association, a nonpartisan watchdog group, to sue the city for more information. A precise route has not been identified. It is unclear whether Mr. Musk’s company can dig faster than traditional methods and how much Chicago might earn from future profits if the tunnel is a success.

Mr. Musk, the billionaire behind SpaceX rockets, has pledged to lower the costs of digging underground, with faster machines and fewer workers. The Boring Company has announced similar plans for a tunnel in Los Angeles to ferry people to Dodger Stadium. The company is digging a two-mile test tunnel at SpaceX’s headquarters outside of Los Angeles as a workshop for its ideas.

Mr. Emanuel said the “skate” technology is not far-fetched — it would be a modified Tesla vehicle frame running on a concrete track. The plan for Chicago is separate from the Hyperloop, a similar idea from Mr. Musk that would create a vacuum inside a tube to eliminate air friction, allowing pods to travel much faster.

“The biggest challenge is coming up with the software for the driverless Tesla,” Mr. Emanuel said. “That’s the hardest piece from an engineering perspective.”

But Mr. Emanuel’s unexpected decision not to run for re-election leaves the project in an odd spot. Some candidates who have already announced plans to run for mayor have criticized the tunnel as improbable — a shiny distraction from the city’s intractable problems. Paul Vallas, the former Chicago public schools leader who is running, has called the tunnel project “fool’s gold.”

The tunnel would start at a station in downtown Chicago, a city that will be led by a new mayor by next spring. Mayor Emanuel had championed the tunnel plan.CreditJoshua Lott/Getty Images

The city is currently negotiating a contract with the Boring Company. Mr. Emanuel said he expected it to be approved by the City Council later this year. Then comes the environmental review, a notoriously slow process that could take at least a year.

Chicago has reason to be cautious. Mr. Musk’s tunnel would start at a downtown transit station that was envisioned as a starting point for express trains to the city’s airports years ago under former Mayor Richard M. Daley. It cost more than $250 million but has been mothballed.

The city’s decision to privatize its parking meters and the Chicago Skyway, a major toll road, has been widely criticized.

“We want to look at the project with the degree of healthy skepticism that’s appropriate given Chicago’s track record on projects like this,” said David Greising, chief executive of the Better Government Association.

Michael Horodniceanu, the former capital chief at the Metropolitan Transportation Authority in New York, said the project would easily cost more than $1 billion. He compared Mr. Musk to Jules Verne, the 19th century author who had a bold imagination.

“I think challenging the system so that people can think differently about how to get things done is a healthy thing,” Mr. Horodniceanu said.

In New York, it took more than a year for a gigantic tunnel-boring machine to dig less than three miles for the Second Avenue subway. The machine dug about 40 feet a day — a slow pace that Mr. Musk has described as more leisurely than a snail, and one he wants to beat.

Some have questioned whether the tunnel is the best use of the city’s limited time and resources, especially since it is largely meant for business travelers. A train could carry more than 1,000 passengers, instead of 16.

When a transit expert raised similar concerns on Twitter, Mr. Musk called him an idiot. But for all of the grumbling in Chicago, even Mr. Musk acknowledged that failure was a possibility.

"If we succeed, it’s going to be a great thing for the city,” Mr. Musk said at a news conference in Chicago in June. “And if we fail, well, I guess me and others will lose a bunch of money.”

Cristiano Ronaldo: I needed to score from a free kick to regain my confidence
After football, Buffon will return to school. He once faced prison for a false diploma
Ronaldo scored the first goal for Juventus from a free kick. There were 43 attempts
Ronaldo is the first in 59 years to score 25 goals for Juventus in Serie A in a single season
Sulscher on 5:2 with Bournemouth: I am happy with the energy of Manchester United and the goals scored. It was a match for the fans
Rashford on 5-2 with Bournemouth: it's Important to push on until the end of the season. Exciting time
⛔ This is the first League of Armenia was stopped because of dogovornjakah. Banned 5 clubs and 58 people (45-for life)
Source https://www.nytimes.com/2018/09/16/us/chicago-tunnel-elon-musk-rahm-emanuel.html?partner=rss&emc=rss

Meghan McCain on keeping guns while in Virginia: ‘It’s not a foreign concept’

The 28 most outrageous lines from Donald Trump's Mount Rushmore speech

Trump gives optimistic Independence Day message, says US is ‘coming back’ after ‘terrible plague from China

'America is made on the bricks of diversity': A poem for America's Independence Day

Almost third of COVID-19 samples show mutation, but not more severe disease - WHO

Rhode Island fights ODs with ad that asks: ‘Do you know your dealer is a vegan?’

AOC machine gets a boost after New York primaries: ‘The Squad is growing’

Inside expensive downward spiral of the $315 million Powerball winner

No promotion for Bayern reserves despite winning 3rd tier

Knocked out of Brickyard, Johnson copes at home with virus

80 artists are writing messages in the skies above U.S. ICE detention centers

As coronavirus cases skyrocket, US marks July 4th with pleas for people to skip the parties

Rep. Eric Swalwell calls for a nationwide mask mandate: 'You're protecting others'

Women Ask Themselves, ‘How Can I Do This for One More Day?’

A Teacher Held a Famous Racism Exercise in 1968. She’s Still at it.

As coronavirus cases spike in Arizona, a neighboring Mexican state tries to shut out Americans

First COVID Drug Trials To Be Released In Two Weeks, WHO Director Says

Why New York City will never build another subway station

Braves star Freddie Freeman has coronavirus, is ‘not feeling great’

Brad Pitt And Angelina Jolie Planning A Family Vacation Together?