(Want to get this briefing by email? Here’s the sign-up.)

Storms on both sides of the planet, disinformation in Macedonia and a world record in the men’s marathon. Here’s the latest: 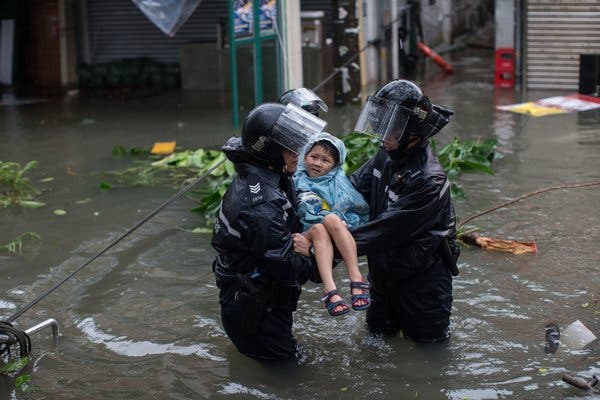 • A typhoon and a hurricane.

After ripping through the Philippines and Hong Kong, pictured above, Typhoon Mangkhut is pelting its way through southern China. In the Philippines, where a landslide buried people in a church and a bunkhouse for miners, officials fear the death toll could surpass 100. In China, at least four people were reported killed in Guangdong Province.

In the U.S., Hurricane Florence slammed into the Carolina coast on Friday, leaving at least 16 people dead and hundreds of thousands without power over the weekend. It has weakened to a tropical depression, and rains should cease sometime Monday, but rivers could rise for days.

We’ve dropped our paywall for our full storm coverage.

• A disinformation battle in the Balkans.

Macedonian rallied on Sunday in support of the most important vote in its history: a Sept. 30 referendum on whether to rename itself North Macedonia. Doing so would end a three-decade struggle with Greece over a name it claims, opening the door to the West and possible NATO membership.

But voters have been besieged by a flurry of social media fakery that Macedonian and Western officials say is directed by Russian-backed groups and aimed at depressing the vote. Russia has denied the assertion.

It has been an anxious season for London’s wealthy Russians. In the wake of the poisoning in England of the former Russian spy Sergei Skripal, Britain is reportedly reviewing investor visas and is increasingly willing to freeze the assets of those who cannot legally account for their riches.

Even debutantes are paying a price, with the cancellation of a London ball to usher the daughters of Soviet-born businessmen into society (the one pictured above is 2014’s). Too many would-be Russian guests couldn’t get visas.

Related: Two Russian spies caught in the Netherlands were expelled for plotting an attack on a Swiss defense laboratory that is analyzing the nerve agent used to poison Mr. Skripal, Swiss officials said.

• Maneuvering around, and within, the Trump administration.

The North Korean leader, Kim Jong-un, is altering his tactics since meeting President Trump, above, in June. He is still making nuclear fuel and building weapons, American intelligence officials say, but now he’s keeping quiet about it. The shift appears to be working for President Trump.

Other things, not so much. A woman has come forward to accuse his Supreme Court nominee, Judge Brett Kavanaugh, of sexually assaulting her more than 30 years ago. “I thought he might inadvertently kill me,” she said.

Also, Mr. Trump has soured on Defense Secretary Jim Mattis, according to interviews with more than a dozen officials.

And Paul Manafort, the former Trump campaign chairman, is cooperating with the special counsel, Robert Mueller, in a plea deal that could shape the final stages of the inquiry into Russian interference in the 2016 U.S. election.

• A new world record in Berlin.

Eliud Kipchoge, a 33-year-old Kenyan who is the most decorated long-distance runner on the planet, smashed the record for the men’s marathon by more than a minute on Sunday. Above, the moment before the finish. “I lack words to describe this day,” he said.

Kipchoge started out at a blistering tempo: 10 kilometers in 29:21. When his last pacesetter dropped back halfway through, he sped up.

His time: 2 hours 1 minute 39 seconds. The second-place finisher was more than five minutes behind. Read our profile.

• “It’s not my future but that of the U.K.” In an interview to mark the six-month countdown to Britain’s withdrawal from the E.U., Prime Minister Theresa May expressed frustration over questions about her political longevity. [BBC]

• The U.S. is blocking millions of dollars in funds for peace and reconciliation efforts in the West Bank and Gaza. [The New York Times]

Tips for a more fulfilling life.

• Dead goat polo, bone tossing, bare-chested horseback wrestling and unusual archery. These are some of the sports at the World Nomad Games, a brutal competition in Kyrgyzstan that aims to resurrect nomadic traditions.

• Sweden, which allowed ordinary citizens to tweet as @sweden for seven years, is ending the experiment in radical free speech. It was quite a run.

• Svyatoslav Vakarchuk, Ukraine’s favorite musician, sang the protest anthems for two popular uprisings and is now considering whether to run for president. “Good leaders, like good surfers, just wait to ride a wave,” he told our reporter.

Last week, two Russians named by Britain as the prime suspects in a nerve agent attack said that they were merely visiting the “wonderful” English city of Salisbury as tourists.

They wouldn’t have been alone.

Near the famous Stonehenge site, the city is about 90 miles southwest of London and is perhaps most famous for its Gothic cathedral, above, which attracts half a million visitors a year.

In “Notes From a Small Island,” the best-selling author Bill Bryson explained, “There is no doubt in my mind that Salisbury Cathedral is the single most beautiful structure in England.”

The main body of the cathedral was completed in 1258 and, as noted by one of the suspects in an interview on Russian TV, “It’s famous for its 123-meter spire.” (That’s equivalent to 404 feet, making it the tallest church spire in Britain.)

The cathedral contains the best-preserved of the four original copies of Magna Carta, the 13th-century document to restrict the powers of the king.

It’s also the burial place of Edward Heath, the former British prime minister, and is home to what is thought to be the world’s oldest mechanical clock.

The cathedral has also featured widely in literature and art, particularly in the work of the landscape painter John Constable.

Correction: The Back Story in last Tuesday’s Morning Briefing gave an incorrect date for the debut of McCormick’s Pumpkin Pie Spice Blend. It was first marketed in the 1930s, not the 1950s.

Your Morning Briefing is published weekday mornings and updated online.

Check out this page to find a Morning Briefing for your region. (In addition to our European edition, we have Australian, Asian and U.S. editions.)

Sign up here to receive an Evening Briefing on U.S. weeknights, and here’s our full range of free newsletters.

Hames can leave Real Madrid for the Premier League for 25 million euros. A year ago, Atletico and Napoli offered 45-50 million euros for him. Real Madrid Midfielder Hames Rodriguez is likely to change clubs at the end of the season
Gattuso on Napoli: We must develop a winning mentality
Avangard congratulated Zenit with the title: it's Time to match and take the Gagarin Cup
Coach of Orenburg Pro 0:1 with Rubin: Morally devastated, could have drawn
Kike Setien: Griezmann played a great match, understood Messi well, scored a great goal. We changed something
Barca President on the Real Madrid match: VAR always favours one team. I have an unpleasant feeling
Faty scored the 9,000 th goal in the history of Barcelona
Source https://www.nytimes.com/2018/09/16/briefing/your-monday-news-briefing-typhoon-kavanaugh-brexit.html?partner=rss&emc=rss

Italy’s problem with working women made worse by coronavirus

Rep. Steube fires back at Trump critics over July 4 address: 'They will criticize anything he does'

Nick Cordero, Broadway actor, dies at 41 after battle with Covid-19

Frederick Douglass Statue Torn Down and Vandalized in Rochester, N.Y.

These senior Indian couples found love again. Not everyone is happy about it