Fact Check: No, it is not Dawood Ibrahim with Amitabh Bachchan in the pic; it's former Maha CM 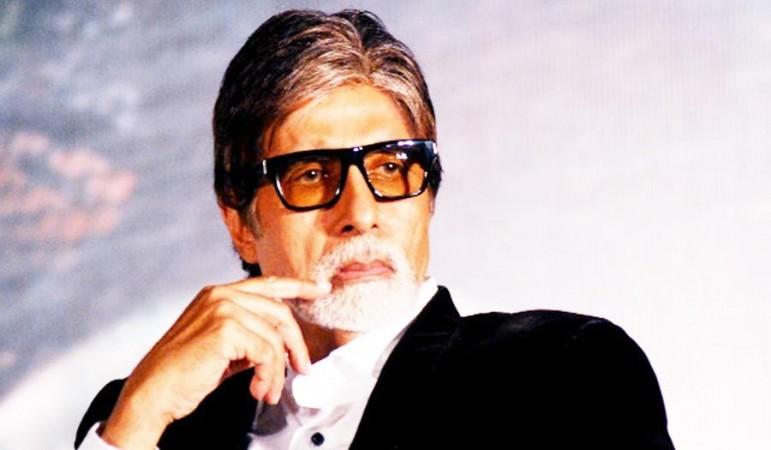 Images on the internet often become the subject of misinformation. Over the past few days, a picture has been gaining traction, showing Amitabh Bachchan meeting a man. Many wondered and were appalled that the actor was seen with Fugitive underworld don Dawood Ibrahim.

However, a large section on the internet also wondered if it could be somebody else? The actor's son Abhishek Bachchan pointed out that it is, in fact, former CM of Maharashtra Ashok Chavan.

Dawood Ibrahim has been one of the most wanted terror-accused that India is after. It was a well-known fact that Dawood has some connections in Bollywood and the underworld in Mumbai. Therefore, when a picture surfaced years later claiming that Bollywood's Big B was seen meeting Dawood, netizens lost their cool. 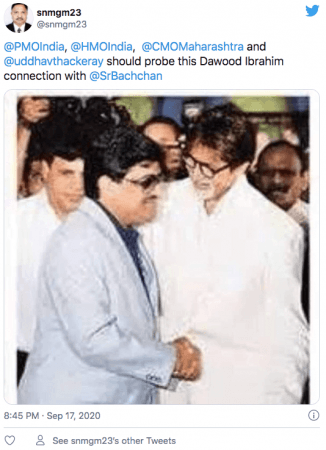 A picture has been going viral showing Amitabh Bachchan shaking hands with a man in a suit, donning a moustache and a pair of sunglasses. Many then began asking for a clarification from the actor and claiming that this could be admissable proof of his connections to the terrorist.

Soon after, the cracks in the frame emerged when some netizens pointed out that it could be Mr Ashok Chavan in the image. It was true that former Maharashtra CM Ashok Chavan had met Amitabh Bachchan at some point.

Interestingly, our reverse image search reveals that the picture was a PTI image that was taken at the commissioning ceremony of the Rajiv Gandhi Sea Link in March 2010 covered by many mainstream media outlets at the time.

Further, Abhishek Bachchan had replied to one of the tweets that had been posted on the matter by saying, "Brother, this photo is from my father and former Chief Minister of Maharashtra Mr Ashok Shankarrao Chavan."

The tweet to which Abhishek Bachchan had replied to on Saturday has since been deleted. However, this hasn't stopped the numerous claims being made.

Fact check: No, it is not Dawood Ibrahim with Amitabh Bachchan in the pic; it’s former Maha CM

Rashford with 4 goals led the race of scorers of the season Champions League
Holand scored the most goals (12) in the first 10 matches in the Champions League
Pirlo about 0:2 with Barca: this match will help Juventus grow
Griezmann did not make any effective actions in 6 matches under Koeman
Ole Gunnar Solskjaer: Leipzig made Manchester United work hard. Rashford had a big impact on the game
Roberto victory over Juventus: the Best response to the unrest in Barcelona - it's a game
Ronald Koeman: Barcelona played their best match of the season against Juventus. We had a lot of chances
Source https://www.ibtimes.co.in/fact-check-no-it-not-dawood-ibrahim-amitabh-bachchan-pic-its-former-maha-cm-828370

Why Meghan Markle Wants Her Case Against the British Press Delayed

Super Bowl 2021 won’t have many fans in attendance

This single issue could decide how Western Pennsylvania votes

‘Brave New World’ Canceled After One Season at Peacock

Officials Warn of Cyberattacks on Hospitals as Virus Cases Spike

Who Is Miles Taylor?

Khloe Kardashian confirms she had coronavirus in video

Kristin Cavallari 'looking forward' to spending Thanksgiving with kids, Jay Cutler ‘as a family’ amid divorce

‘Brave New World’ Canceled By Peacock After One Season

Revolt’s new Vote or Die! campaign is not exactly like its predecessor

Jerry’s Deli In Studio City, Which Once Had Andy Kaufman As A Busboy, To Close Friday

Evacuation orders lifted for many Californians who fled fire

The science behind 'the breath of a wok,' an essential ingredient in the perfect bowl of fried rice

Supreme Court Delivers Two Major Voting Victories to Democrats. But the Battle May Not Be Over

Seahawks extremely thin at running back as 49ers approach

Stream It Or Skip It: ‘The Soul of America’ On HBO, A Documentary That Examines America’s Dark Present Through The Lens Of The Past

‘The Masked Singer’ Reveals the Identity of the Lips: Here’s the Star Under the Mask

‘Perception Hacks’ and Other Potential Threats to the Election

‘Savage’ teens beat and stab girl, dump her in creek, then go to McDonalds for smoothies

Buttigieg defends Biden, claims Dems 'would have chosen somebody else' if they wanted fracking ban

'Quick, quick, quick': Trump rushes McSally at rally as she fights to hold her Senate seat

Parents seek answers about masks, distancing, pods as CPS looks to reopen schools and plans for simultaneous teaching of kids who remain home

The Problems with Prop 24 and California's Internet Privacy Law

Hillary Clinton Backs Up Kamala Harris After Critic's Column: 'Give Me A Break'

Podiatrist: Pandemic is leading to problems with people’s feet