R&B singer Fantasia is expecting a child with her husband, Kendall Taylor.

The couple, who have been married for five years, had been enduring fertility challenges and sought medical help.

“They were talking about in-vitro. They were going to do artificial insemination,” Taylor said. “I hear what y’all saying, but I know what God showed me.”

The couple announced their pregnancy on their Instagram Live show, Taylor Talks, which they air weekly. 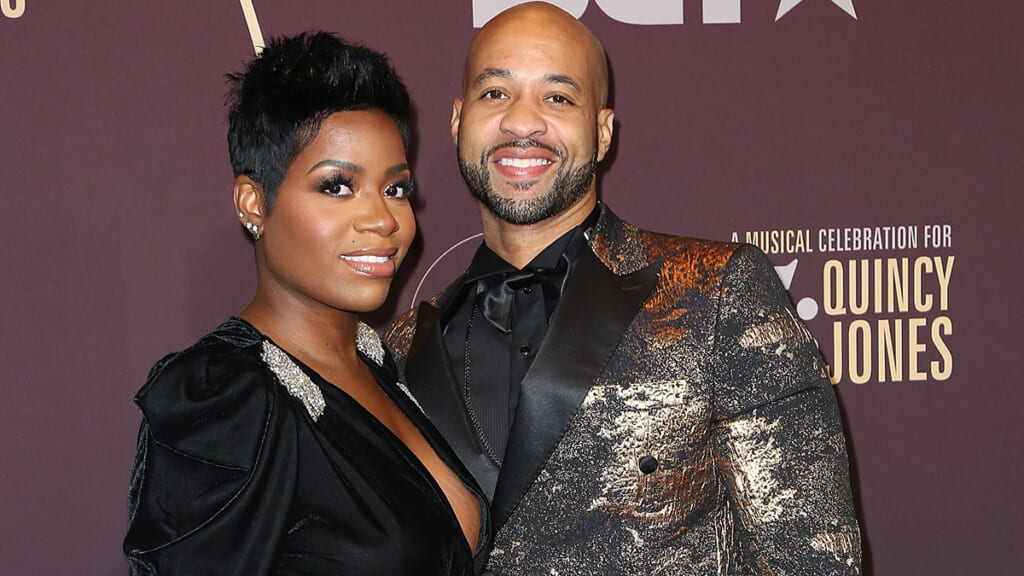 Fantasia Barrino and her husban Kendall Taylor arrive at “Q 85: A Musical Celebration for Quincy Jones” presented by BET Networks at Microsoft Theater on September 25, 2018 in Los Angeles, California. (Photo by Maury Phillips/Getty Images for BET)

“Keep trying, and you will conceive,” Fantasia said.

“Only God can do it,” Taylor echoed.

The 36-year-old American Idol winner has two children from previous relationships: a daughter, Zion, and a son, Dallas. She didn’t disclose the sex of her soon-to-come bundle of joy.

Taylor, a businessman and motivational speaker, also has an adult son and two grandsons.

The pair had been trying for years to naturally conceive a child together.

“I was trying to hide it as hard as I could from y’all,” she said. “I promise you. Just keep waiting on God. It was really starting to depress me and him.”

The couple met in 2015 and dated for only three weeks before getting engaged.

In a November 2019 interview with Essence, Fantasia said, “I will have to say kudos to [my husband] because when he came into my life, he brought out a Fantasia that I didn’t even know was there.”

“It started with my whole transition and my fasting time,” she revealed, “because if I didn’t sit back and take the time to realize who I was and let go of some stuff, then I would have lost him.”

Fantasia’s most recent studio album, Sketchbook, was released in 2019. It was nominated for an NAACP Image Award for Outstanding Album.

During the coronavirus pandemic, the singer has also been sharing recipes from her new vegan lifestyle.

Borussia Gladbach signed Kone for 9 million euros. The prop will finish the season in Toulouse
We want Messi to stay until the end of his career, but first we will think about the club. Even the best player in history is no more important than Barca. Freisha about Leo
Wijnaldum on Liverpool: We have implementation issues and it's hard to explain
Real Madrid will play Getafe in La Liga on February 9. The match of the 1st round was postponed due to Madrid's relegation from the Spanish Cup
Monaco bought top scorer Brugge Diatt for 16 million euros
Crystal Palace have loaned Mainz top scorer Mateta for 1.5 years with the right to buy out for 15 million euros
I don't think Liverpool is in a crisis. Burnley coach after 1-0 at Anfield
Source https://thegrio.com/2020/11/25/singer-fantasia-pregnant/

Up to 25 thousand pesos in credits for micro-businesses: This is the economic reactivation plan for Mexico

The US President said he would 'manage the hell' out of the pandemic. Now he has to deliver

Knicks whack Warriors to move to .500

Dementia, Alzheimer's not an inevitable part of aging: Study

Google threatens to shut down search in Australia

Google Threatens to Stop Search in Australia Over Paid-News Legislation

Trump may be gone, but the instruments of information warfare that empowered him remain

National Guard troops who protected the Capitol for Biden’s Inauguration were told to sleep in a parking garage.

Foreign fighters were meant to leave Libya this week. A huge trench being dug by Russian-backed mercenaries indicates they plan to stay

Tokyo Olympics will be this summer, despite report: IOC

The US President is so far as good as his word to 'manage the hell' out of the pandemic, driven by urgency to revive a sickened, struggling nation

Whatever Happened to the Populist Left?

The Cool Kids Are Back in Town!

The City Planner’s Guide to Tragedies and Trade-Offs

Portland rioting against Biden inauguration leads to charges for 4, more likely to follow

Hannity: Biden 'already begging for a break' on first full day as president

Indiana shuts down No. 4 Iowa in 2nd half, rallies for upset

Lawmakers seek to return National Guard soldiers to the Capitol after they were relocated to sleep in a parking garage.

National Guardsmen asked to rest in parking lot instead of Capitol

Everything We Learned About Joe Biden's Family From Granddaughter Naomi's Instagram

Evans, Van Lith lead No. 1 Louisville past No. 23 Syracuse

Gambling risks for youth may be taught in Md. high schools

Miguel Cardona: What to know about Biden's education secretary pick

Denis McDonough: What to know about Biden's VA secretary pick

Ned Ryun: Biden's executive actions show the American people 'are not even an afterthought' to him