First Draft on Politics: A Special Edition for the California Primaries

Hello! Tomorrow is one of the year’s busiest primary nights, and here’s a special afternoon edition of First Draft to get you up to speed.

Eight states have primaries on Tuesday. In Montana, Senator Jon Tester, a Democrat in a deeply red state, is up for re-election. Democrats in New Jersey are eyeing several suburban districts in their quest to take control of the House of Representatives.

But it’s California that’s drawing the most attention, and rightfully so. The state has the fifth-largest economy in the world, and the choices its voters make have ramifications far beyond its state line.

We’ll have live results from all eight states on Tuesday night at NYTimes.com. And until then, we’ve rounded up seven key stories to help you understand the California primaries:

First up, the state has an unusual primary system. Instead of each party selecting a nominee and those nominees facing off in November, under California’s system, it is simply the top two vote-getters this week who will face off this fall. It’s unusual, yes, and it’s wreaking a little bit of havoc on the state’s election process. 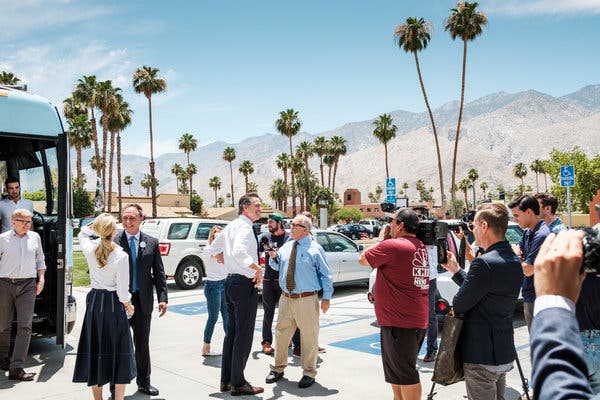 Gavin Newsom, California’s lieutenant governor and the leading Democratic candidate for governor in many polls, arrived for a town hall event Thursday in Palm Springs ahead of Tuesday’s primary election.CreditMax Whittaker for The New York Times

In the race for governor, the leading Democrats, Gavin Newsom and Antonio Villaraigosa, are struggling to break from the shadow of Gov. Jerry Brown, as well as their own past personal indiscretions. Among the Republicans, John Cox, the leading candidate has seen his position grow stronger in the days leading up to the primary. Here’s a look at where the governor’s race stands.

Like a lot of the country, California has pockets that are deeply red and deeply blue.

In San Francisco, which is voting for a new mayor, the four front-runners are all Democrats who agree on the liberal basics like legalized marijuana and funding public transportation. But the issue of homelessness in the city has opened a fissure in the race: ?

The Central Valley, the state’s agricultural core, is represented by conservative congressmen like Kevin McCarthy and Devin Nunes. It’s a rural heartland that embraces conservative values, and all the noise of the primaries .

Barcelona is ready to let Umtiti go. Lazio, Napoli, Roma and Torino are Interested in him
Dembele returned to training on the basis of Barcelona. He hasn't played since November
Milan will buy out Kjaer for 3.5 million euros
22 thousand tests before each match – so Union wants to return a full stadium. One game will cost more than a million euros
Real asked fans not to gather in Madrid to celebrate the championship
Ronaldo will not leave Juventus. He wants to overtake Immobile and Lewandowski on goals and win trophies
Napoli will pay about 81 million euros for Osimhen. Medical check-up is scheduled for Thursday
Source https://www.nytimes.com/2018/06/04/us/politics/california-primary-explained.html?partner=rss&emc=rss

Trump on Black Americans killed by police: "So are White people"

Some of Trump's loyal supporters cling to COVID-19 conspiracy theories

Is it possible to get reinfected with the coronavirus?

'It's a different world': Tiger Woods' return doesn't mean a return to normal

Yanks’ Tanaka unsure whether he can take 1st rotation turn

Kings’ Barnes isn’t at NBA restart, says he has coronavirus

New Hollywood Podcast: ‘We Are Freestyle Love Supreme’s Utkarsh Ambudkar Talks Being South Asian With A “Little Bit Of Flavor”

No bodies found yet in search for Tulsa massacre victims

Bread is Here to Address All Your Curly Girl Hair Needs

The other infectious diseases spreading in the shadow of the pandemic

For ex-cons, a new chance at Paycheck Protection loans

Viola Davis says ‘The Help' was created in ‘cesspool of systemic racism’: ‘I betrayed myself and my people’

Trump administration backs down on restrictions for international students

How an Alvin barbecue restaurant has thrived during the pandemic

Louisiana man accused of killing wife has trial delayed due to coronavirus: report

As Black Trans Lives Matter marches brought hope, transgender teen Brayla Stone was found dead. Here's why the 'epidemic' is far from over.

Miami is the new epicenter of the coronavirus

Cuomo Rejects AOC’s Claim That Crime Uptick Is Related to Inability to Pay Rent: ‘It Is Factually Impossible’

Trump Is Responsible for One of America’s Most Colossal Failures

Plan N bond proposal would save some Detroit homes, demolish others

Wall Street ticks higher in another day of unsettled trading

Michigan man killed by police after mask dispute at store

Meet the mind-blowing bakers behind those viral cake videos

In Reversal, U.K. Will Ban Huawei Equipment From Its 5G Network

Gun Violence Is Killing More Kids in the U.S. Than COVID-19. When Will We Start Treating It Like a Public Health Issue?