Florence weakened to a tropical depression Sunday, but that is cold comfort to residents in North Carolina who have seen over 2 feet of rain and are now battling major-river flooding and possible tornadoes.

"Flood waters are still raging across parts of our state, and the risk to life is rising with the angry waters," North Carolina Gov. Roy Cooper said at a midday news conference.

He added that "this storm has never been more dangerous than it is right now" in certain areas of the state.

Some parts of the state were getting 2 to 3 inches an hour, Cooper said. 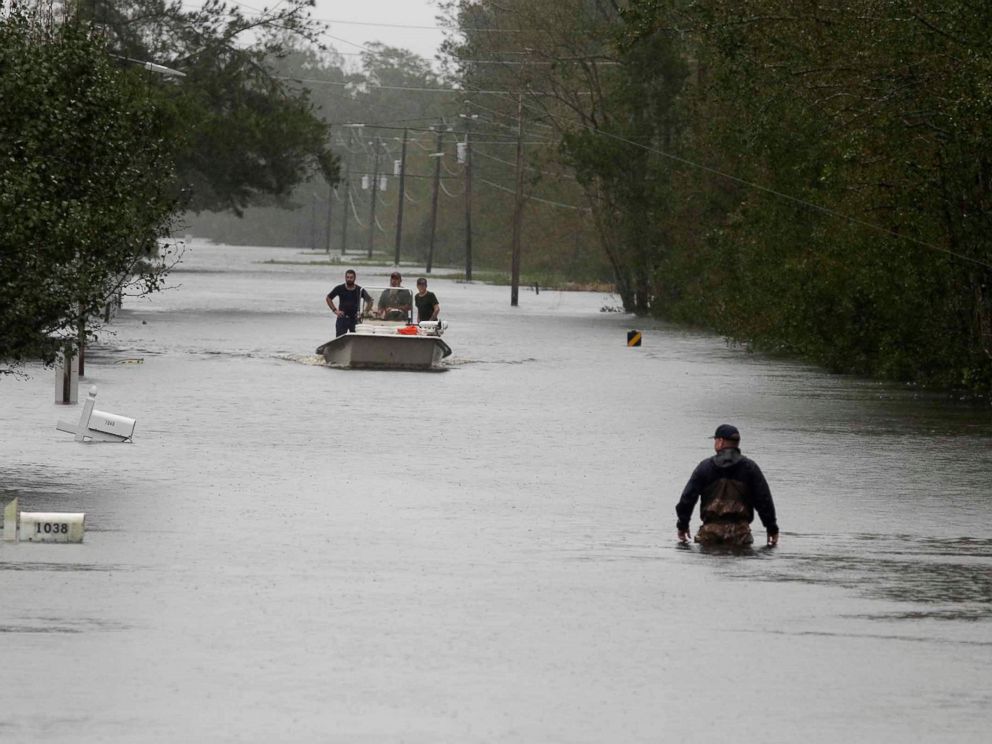 "That's enough to cause flooding in areas that have never flooded before until now," Cooper said.

Since the storm made landfall as a hurricane in North Carolina on Friday morning, it has been blamed for 16 deaths.

Officials said that 10 people died in North Carolina and six in South Carolina. The death toll included a person killed Sunday in a pickup truck crash near Gilbert, South Carolina, that occurred when the motorist drove through standing water on a roadway, according to the South Carolina Department of Public Safety.

Hundreds of people have been rescued by local authorities, Cajun Navy volunteers and the U.S. Coast Guard since Friday morning.

New evacuation orders were issued Sunday for a mile-long area along the Cape Fear and Little rivers in North Carolina. More than 700,000 households and businesses in the state were still without power as of Sunday afternoon, an estimated 15,000 people were in shelters, and 171 primary roads were closed including parts of two interstates, authorities said.

The state Highway Patrol advised people to stay off the roads, saying troopers responded to 48 collisions from Saturday night and into Sunday morning.

Adding to the threat of further flooding, a tornado watch was in effect for most of Sunday for the areas of Wilmington, Fayetteville, Myrtle Beach, Jacksonville, Oak Island, and Florence.

"It's bad right now, and we do expect it to get worse over the coming days," Michael Sprayberry, director of North Carolina Emergency Management, said on ABC's "This Week" Sunday. "We know that's going to be a major mission going forward because this is historic and unprecedented flooding." 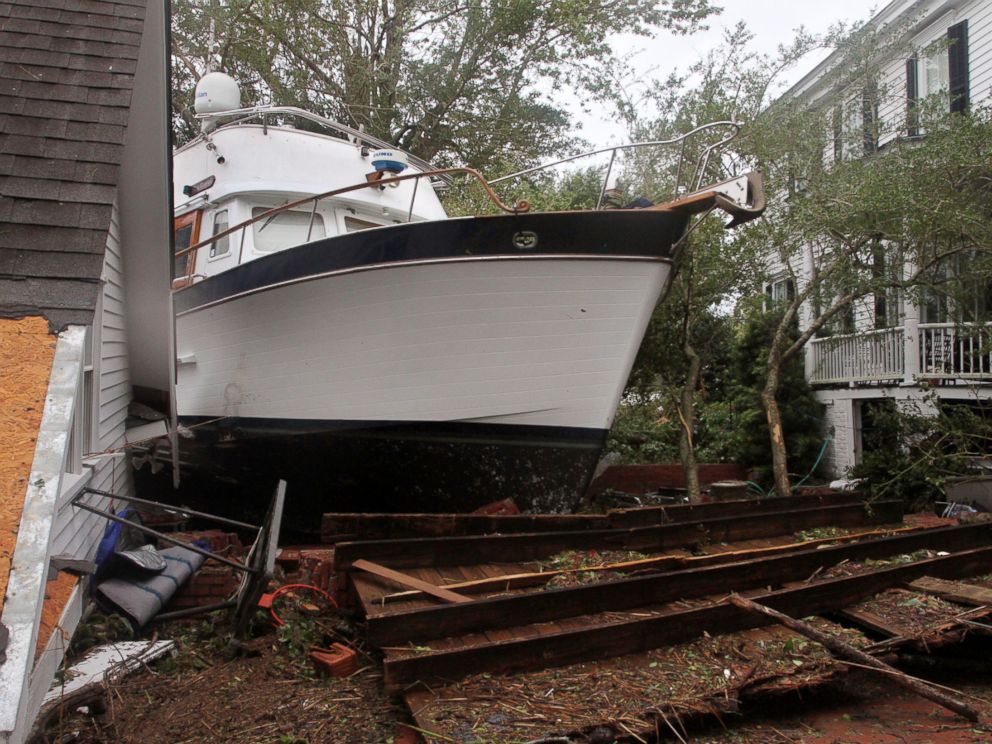 AP
A 40-foot yacht lies in the yard of a storm-damaged home on East Front Street in New Bern, N.C., Saturday, Sept. 15, 2018. The boat washed up with storm surge and debris from Hurricane Florence.

"This will be very dangerous flooding over the next few days," the National Weather Service said in a tweet Sunday morning.

"My biggest concern is the rising water," Schultz said on "This Week," noting that Wilmington, North Carolina, got 24 inches of rain and could potentially get 15 inches more.

"We're looking at a high water situation," he said. "The rivers could potentially crest here into the early part of this week. So, we have not seen the worst of the flooding."

Schultz was among the emergency officials who briefed President Trump on the storm on Saturday.

FEMA, First Responders and Law Enforcement are working really hard on hurricane Florence. As the storm begins to finally recede, they will kick into an even higher gear. Very Professional!

"We talked about the massive risk the storm poses, catastrophic flooding, prolonged flooding," he said of the briefing. "We gave him an update on response capabilities in the theater and the president is completely leaning in. Anything the feds need to do to support the local, the state partners here in South Carolina and North Carolina. We feel fully supported." 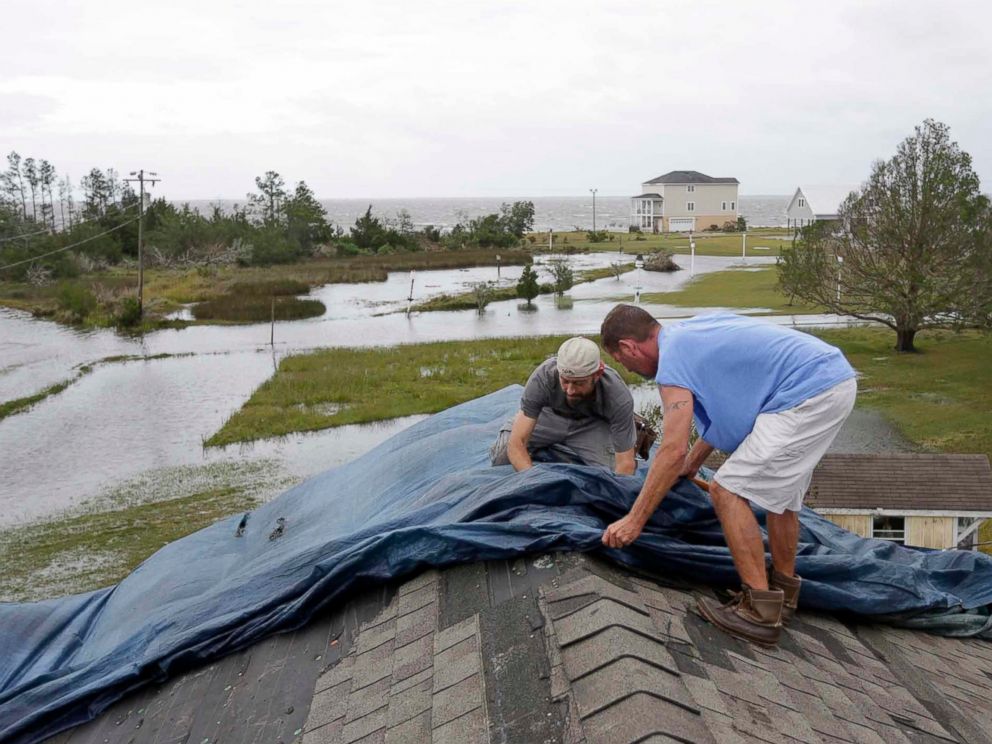 The Lumber River, near Lumberton, North Carolina, rose to into major flood stage Sunday. It is expected to reach a level very near the record Hurricane Matthew set in 2016. Mandatory evacuations were issued for South Lumberton on Saturday.

Major river flooding is also expected on some rivers from southern Virginia to northern South Carolina.

The Northeast Cape Fear River, near Chinquapin, North Carolina, will rise above record flood levels set by Hurricane Floyd in 1999. This will cause devastating flooding across much of Onslow County with travel made impossible and many homes completely flooded.

The Neuse River, both near Goldsboro and Kinston, North Carolina, will reach major flood stage late Sunday and into Monday. The Waccamaw River, near Conway, South Carolina, will rise near record levels by the end of the week.

Florence has dropped a tremendous amount of rain in eastern North Carolina, with a widespread 20 to 30 inches reported already. Radar is estimating that some areas between Wilmington and New Bern, North Carolina, have received over 30 inches of rain.

These are some of the latest rainfall totals as of 11 p.m. on Saturday:

Florence is now the third storm to set a tropical cyclone state rainfall record in just the last 12 months. Harvey dropped 60.58 inches of rain last year in Texas, setting the state’s new record. Lane just last month dropped 52.02 inches of rain in parts of Hawaii, breaking the state record. The 30.59 inches that have fallen in Swansboro sets a new record for North Carolina.

Florence also currently stands as the sixth-highest tropical cyclone rainfall total across the U.S. for records dating back to 1950.

Heavy rains bands are still coming onshore in eastern South Carolina and North Carolina on Sunday morning. Some of the heavier bands have shifted toward Fayetteville, Charlotte, and Raleigh. 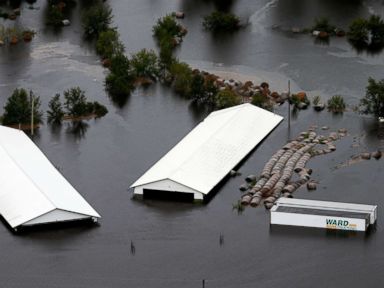 Torrential rain is causing inland flooding with major roadways, including large portions of I-95, closed.

An additional 6 to 10 inches of rain is still possible along the southeast border of North Carolina and South Carolina.

Life-threatening, catastrophic flash flooding is likely over the southern to central Appalachians from western North Carolina into western Virginia and eastern West Virginia. Torrential rain will cause flash flooding and increase the risk of landslides in the higher terrains. 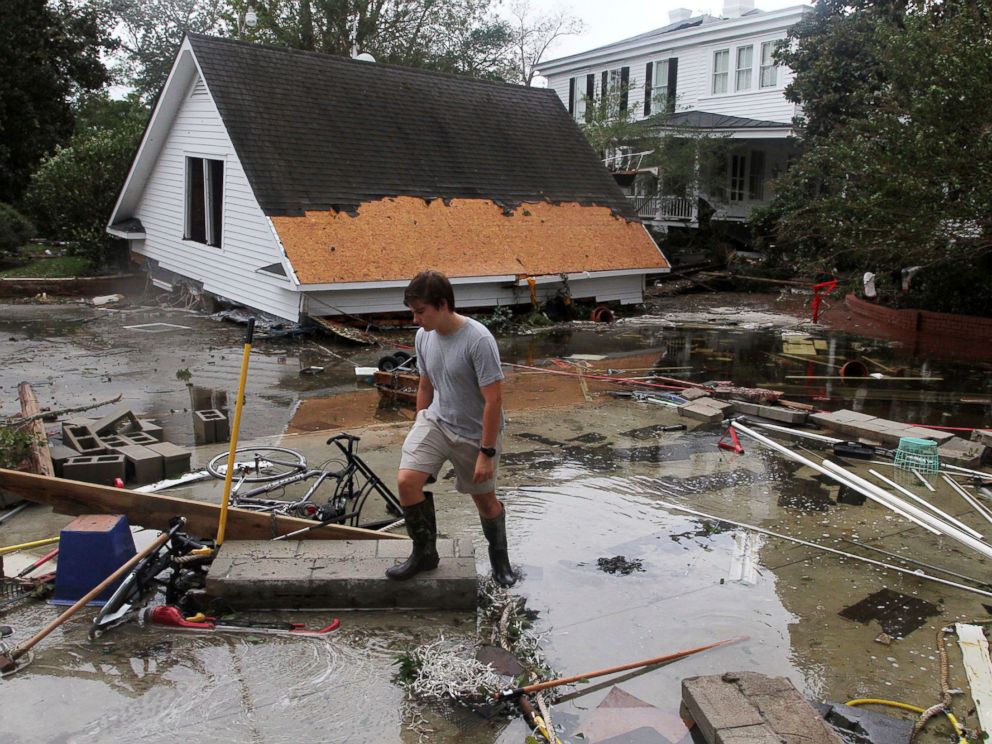 Even though Florence is weakening, it will still bring significant rainfall inland to the Appalachians before moving toward the Northeast on Tuesday. Totals could exceed 4 inches locally for inland New York and Massachusetts.

"People need to heed the warnings from their local emergency management experts and stay in safe ground," the Coast Guard's Adm. Schultz said.

Lampard on 3-0 with Watford: a dry Win at home, three goals scored-Chelsea played very well
Pulisic on 3-0 with Watford: Chelsea needed this win. We are confident that we can get into the top 4
Rebic scored 9 goals for Milan in 11 Serie A matches
Mikel Arteta: getting Arsenal into the Champions League seemed impossible a few weeks ago
Бав Bayern won the gold double in Germany for the 13th time
Neuer provided an assist in the German Cup final with Bayer
Sarri about 4:1 with Torino: Juve had a false sense of security after a couple of goals
Source https://abcnews.go.com/US/major-river-flooding-threat-posed-florence-heavy-rain/story?id=57857204

Mets will open 2020 MLB season at home against the Braves

Stream It Or Skip It: ‘Los Futbolisimos’ on HBO, a Spanish Kiddie-Sports Comedy That’s a Real Kick in the Head

Trump wants a park for statues of 'American heroes.' Just how might that work?

NASCAR-Xfinity Pennzoil 150 at the Brickyard Results

Dodgers pitcher Price won’t play this year because of virus

Trump seeks to 'appeal to the very best in the American character' in July 4 remarks, an aide says

Lucky Brand files for bankruptcy, has offer to sell company

Bolsonaro, others shun masks at July 4 celebration in Brazil

Spain puts 200,000 people in Catalonia back into lockdown after coronavirus spike

Thomas Jefferson alongside Black great-grandson 'holds a mirror' to U.S.

Man claims Nickelodeon fired him because he’s a ‘white guy’

Italy denies entry to private plane with Americans on holiday

Barkley inspires Chelsea to 3-0 win over Watford in EPL

Elijah McClain should not have been injected with ketamine

Former Rep. Allen West: July 4th has special meaning for me as a black man who overcame discrimination

A hiker died after a fall at the Grand Canyon

Ghislaine Maxwell prepared to snitch on ‘big names’ to save herself

Sen. Menendez blocks compensation to families of US victims bombed by al Qaeda

Woman falls to her death while taking photos at Grand Canyon

As Statues Come Down Nationwide, Trump Seeks to Establish a ‘Garden’ of U.S. Heroes

England's pubs reopen as officials warn it is not "risk-free"

Socially distant Fourth of July in Chicago area: ‘We would normally have a bigger gathering with family'