A suspect was arrested in Florida this week in the alleged killing of a U.S. Army veteran of Afghanistan on his daughter’s fourth birthday, Orlando police said.

Joseph Torres, 34, was shot three times, allegedly by Shaun Engram Jr., 25, early Sunday morning while Torres and a friend were walking around downtown Orlando and getting food around 2:30 a.m. ET, according to FOX 35 in Orlando.

Engram reportedly stood in front of Torres and told him he couldn’t pass and Torres was shot after a fight broke out.

"This whole thing popped off in a matter of seconds," Orlando police Detective Teresa Sprague said at a news conference Wednesday, according to WKMG-TV in Orlando.

"This father of three lost his life but survived Afghanistan," she added.

"This father of three lost his life but survived Afghanistan." 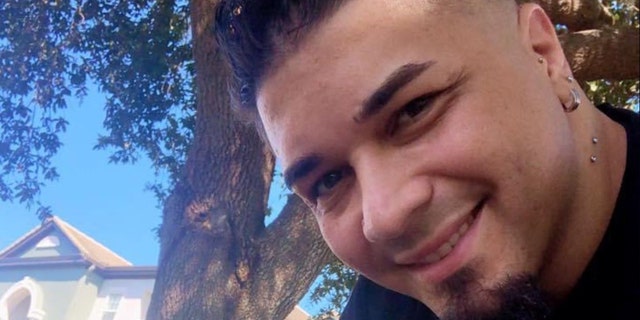 Joseph Torres, 34, was allegedly gunned down on his daughter's birthday. (Orlando Police Department )

"A military veteran and a youth in their prime have been affected by violence this past weekend. Enough is enough," Rolón said during the news conference, according to FOX 35.

Engram is a former Marine, according to WKMG.

Torres’ friend Eric Garcia was appalled to hear the suspect was also a veteran.

"He was supposed to have honor and respect for just humans’ period, and for that to happen, it’s just unfortunate that another veteran does that to another veteran," Garcia said. "You don’t get a pass for killing someone senselessly. That did not have to happen at all."

There was no indication that Torres and Engram knew each other.

Torres had bought his daughter a dress as a birthday present but hadn't given it to her before he was killed, WKMG reported.

Torres reportedly had two other children as well.

"He had so much to live for," Garcia said, WKMG reported. "He just wanted to enjoy his life, enjoy his family, his children. He wanted to be there for his kids."

Engram faces a charge of first-degree murder, according to WFTV-TV in Orlando.

Soccer game kept woman away from condo wing that collapsed

Can Biden Cut a Deal With Iran’s New Hardliner President?

White House preparing to relocate Afghans who helped US

Does Chris Tucker Still Have A Negative Net Worth?

So, Did Anyone on Too Hot to Handle Really Find Love?

US economy up 6.4% in Q1 with stronger future gains expected

Vinokourov forced out at Astana before Tour de France start

Stocks add to weekly gains, pushing S&P 500 back to record

Alabama teenager donates his hair for children with cancer

JPMorgan bringing back employees to office regardless of COVID vaccine status

Is F9 the best blockbuster ever? No. Is it absolutely perfect? You bet.

Social-Media Managers Are the Next Generation of CMOs

Hill negotiators pushing for policing deal ahead of recess deadline

South African brothers disappear with $3.6B in bitcoin in alleged heist

Unreleased Live Johnny Cash Album From 1968 Due in September

Earth-like atmospheres may be hard to find; uncommon on other planets [details]

In Berlin, Blinken stresses the importance of learning from the Holocaust

Biden's patience may have delivered a breakthrough

Senate considers shaving some time off August recess, when it—and the House—should be canceling it

Column: Throwing tortillas isn't a racist act — until it is

What Defines a Strong Company?

Trump and House Democrats at impasse over financial records subpoena

Two men shot – one in the face on FDR Drive – in Manhattan overnight: cops

Lawyer saw no sign that software mogul McAfee would kill himself