All Hallows’ Eve is still one day away, but that hasn’t stopped the stars from getting a scary start on their Halloween-from-home costumes this year.

From “Schitt’s Creek” to “Tiger King,” here’s a spooky sampling of some of the best so far.

17. Paris Hilton as all the things

Hilton gets an A for effort for this homemade montage of herself trying on a variety of vague Halloween-store looks, including a schoolgirl, a flapper and a Playboy bunny.

Not sure exactly what the “Boom Clap” hitmaker is supposed to be here, but we’re loving the gooey monster glove and matching purple eye shadow nonetheless!

The Disney Channel alum already had her signature ginger locks to complete this scarlet fairy-tale look. Extra points for the bottle of red wine in the back!

Go, go, Kylie Jenner! The reality-TV star and beauty mogul united with some powerful friends for this impressive “Power Rangers” ensemble. And, of course, she was the red one.

13. Rosalía as Leeloo from “The Fifth Element”

The “Con Altura” artist’s cosplay inspired by Milla Jovovich’s fan-favorite character from 1997’s “The Fifth Element” is out of this world!

12. Kandi Burruss as a cheetah

This spot-on costume from the “Real Housewives of Atlanta” star is the cat’s pajamas! Burruss has officially stepped out of the house and into the wild.

11. Vanessa Hudgens as a black widow

Per usual, the “High School Musical” alum has already debuted multiple eerie ensembles this Halloweek, including a convincing Catwoman and a Hitchcockian bird. But it’s this spidery set — enormous web included — that stands out among the rest.

The “Don’t Stop” artist’s gorgeous Yumeko cosplay, shared Thursday on Instagram, may or may not be an official Halloween costume. Either way, this anime-inspired makeup — done by Meg herself — is stunning and deserving of a mention.

Tens across the board for this ghoulish getup from longtime “Dancing With the Stars” judge Inaba.

8. Kim Kardashian and co. as the ‘Tiger King’ squad

7. Halsey as the Corpse Bride

Tim Burton would be proud of this haunting ensemble inspired by the director’s 2005 stop-motion musical. 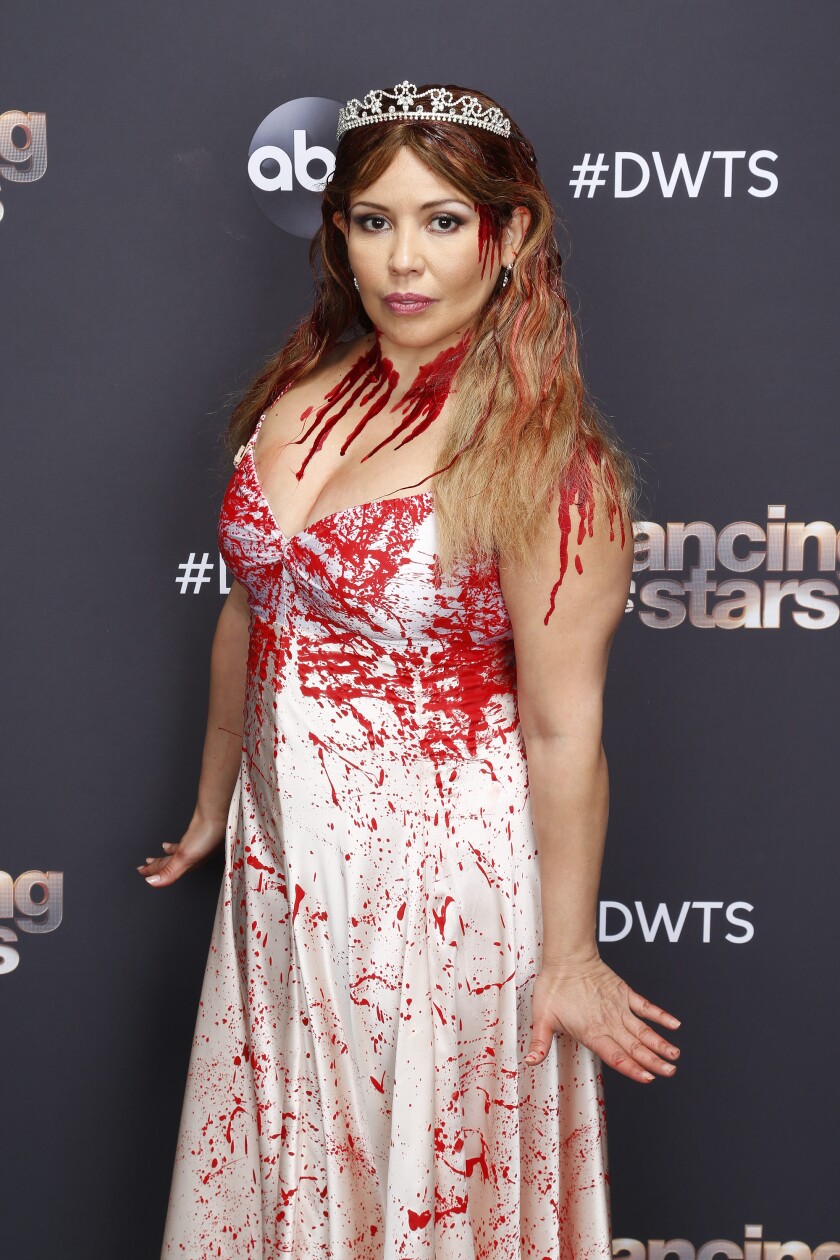 Justina Machado dressed as Stephen King’s Carrie on “Dancing with the Stars.”

This “Dancing With the Stars” homage to Stephen King, courtesy of “One Day at a Time” actress Machado, is bloody brilliant.

5. Nelly as Freddy Krueger from “A Nightmare on Elm Street” 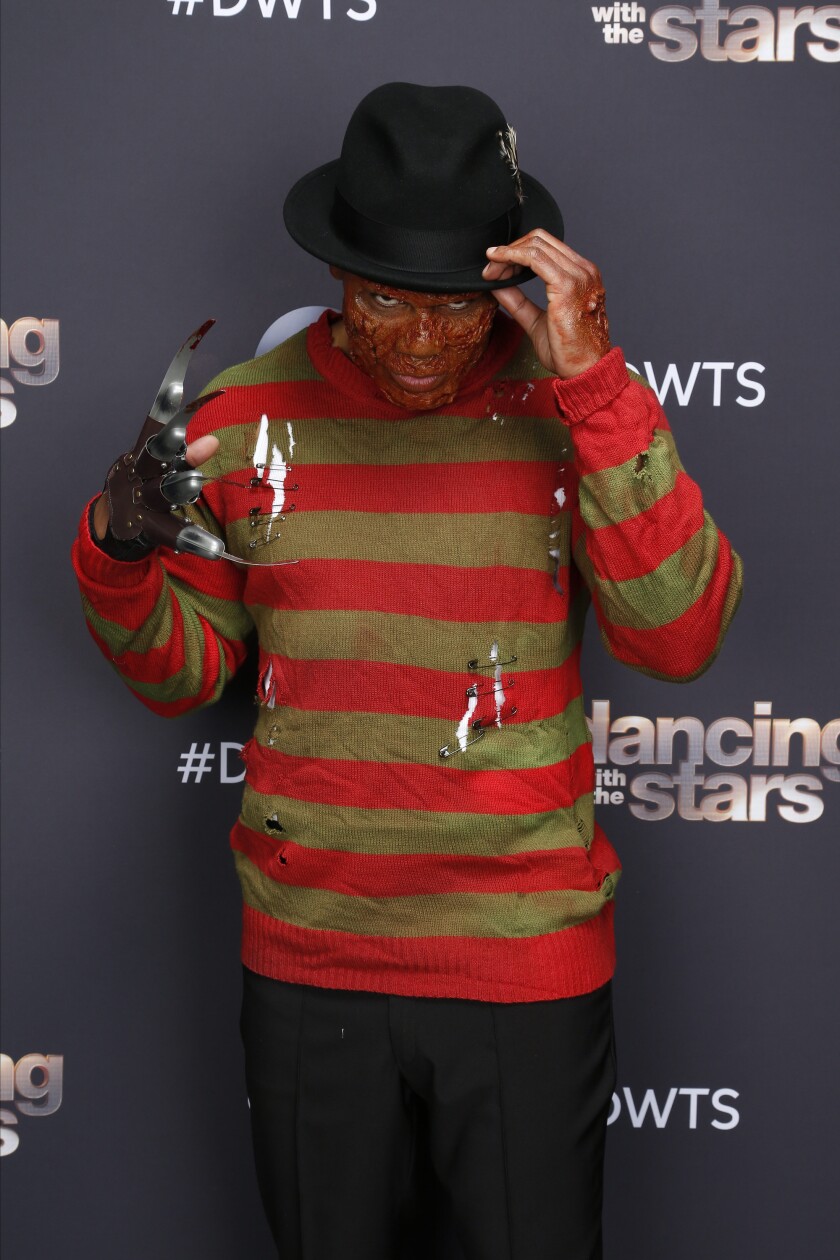 Nelly dressed as Freddie Krueger on “Dancing With the Stars.”

Another fright from the Halloween-themed episode of “Dancing With the Stars,” this creepy “Nightmare on Elm Street” cosplay from rapper Nelly is truly the stuff of, well, nightmares.

Somebody light the Bat signal — this Gotham-style getup from rapper Rico Nasty is no joke.

3. Kelly Ripa and Ryan Seacrest as Moira and David from “Schitt’s Creek”

This love letter to Catherine O’Hara and Dan Levy’s Emmy-winning “Schitt’s Creek” performances, courtesy of the “Live With Kelly and Ryan” cohosts, got the stamp of approval from Levy himself, who tweeted, “I’ve never looked better.” Enough said.

2. Mindy Kaling as Devi from “Never Have I Ever”

Never have I ever loved a Halloween costume more than Kaling’s perfect take on Maitreyi Ramakrishnan’s spunky teen protagonist from her hit Netflix comedy.

We cannot handle this bootylicious Halloween serve from “Tap In” hitmaker Saweetie, who somehow filmed an entire mini music video as all three members of Destiny’s Child.

Khabib reacted to Maradona's death: One of the greatest. Millions love football because of it
Gasperini on 2:0 with Liverpool: This is unbelievable. Atalanta played their football
Simeone on Maradona's death: Impossible to believe. He infected us with football. This is a great loss for me
Bayern and city are already in the Champions League play-offs. Who is already with them, and who is in step?
Conte Pro 0:2 from Real Madrid: We saw the difference between them and us. Inter made too many gifts
Liverpool have never scored a goal against Atalanta in their home Champions League match
Liverpool lost at home for the first time in 2 years! Gave Atalanta a couple of goals and never hit a goal
Source https://www.latimes.com/entertainment-arts/story/2020-10-30/celebrity-halloween-costumes-2020-ranking

The Latest: No. 9 UCLA women’s basketball opener called off

Seasonal depression could be worse than ever this year

5 Productivity Rules to Keep You Focused When Working From Home

L.A.'s Laugh Factory is taking its free Thanksgiving dinner outside amid COVID-19

How TV Shows Have Handled the Pandemic: The Good, the Bad, and the Not at All

How to shop at Black-owned businesses over the holidays

'Getting worse each day': 1 in 145 L.A. County residents can infect others with COVID-19

What can states do to save jobs? Order people to mask up

As the days get shorter, some people get SAD

Sen. David Perdue claimed he was discriminated against as a white man

'Happiest Season' is a holiday rom-com about coming out. Here's why that's important

Trump announces 'a Full Pardon' for Michael Flynn in tweet

LAUSD aims to give out 1.5 million meals, food to last through Thanksgiving weekend

Preserving the memory of the victims of last known slave ship

Words of Gratitude From Maryland

Rick Schroder explains bail for Kenosha shooter Kyle Rittenhouse: 'It made me mad'

Doctor recreates what COVID-19 patients may see before they die

How Do You Measure Value? 3 Not-So-Obvious Objectives (and Results) You're Missing Out On

In fight with COVID-19, L.A. County faces 'most alarming metrics we've ever seen'

Chevrolet Trailblazer 2021: The Perfect Family Car for Adventure and Everyday Use

Hosea Chanchez pays tribute to Brandy: ‘You are the Grammy’

‘We Can Begin To Heal the Wounds.’ Inside the Efforts to Provide Mental Health Care to Families Separated at the U.S. Border

Joe Biden reminds Americans "we're at war with a virus, not with each other"

Lamar Odom prepping docuseries: ‘I surely am a product of my environment’

Power could be cut to 76,000 in Southern California on Thanksgiving due to fire risk

Ruling opens the way for sex, rock and 'gangster' talk on license plates

5 things to watch over Thanksgiving break no matter your mood

Column: Brace yourself for Trump's scorched-earth attacks on health and safety

Tayshia Adams opens up about race on ‘The Bachelorette’

4 Things to Understand When Buying a Business

Ahead of His Time—And Behind It

Joe Biden Defends His Cabinet Choices: 'This Is Not A Third Obama Term'

“Stop the Steal” Republicans Are the New Anarchists

Rocky The Christmas Tree Stowaway Owl Returns To The Wild