Fox News reporter Nick Givas joined a squadron of GEICO Skywriter pilots to honor WWII veterans, by dropping rose petals to mark the 75th anniversary of the end of the war. The flowers were dropped on the Long Island National Cemetery in New York in anticipation of the official anniversary on Saturday and served as a tribute to those who made the ultimate sacrifice in defense of freedom.

Fox News was invited by a team of aviators to ride in a vintage WWII airplane on Wednesday as it dropped roses over a cemetery in New York to commemorate 75 years after the war's end.

The roses symbolized the peace that followed after Japan surrendered to the Allies on Aug. 15, 1945. The country's submission marked the end of an unprecedented global struggle that cost millions of lives and rewrote history in the process.

The planes, built around 1940-1941, were called "The T6" by the Army Air Corps and were alternatively known as "pilotmakers" because of how many young fliers earned their wings while training on them. They've been fully restored and specially equipped to skywrite and to carry out missions such as this one by the GEICO-backed Skytypers.

The aircraft went as fast as 180 mph as they soared over veterans' gravestones below, above Long Island National Cemetery.

The squadron of SNJ-2 planes was led by former Naval aviator Mark "Gooch" Gannucci, who's been flying professionally for almost 30 years and who serves as a major airline pilot. He is also a volunteer pilot at the Military Aviation Museum in Virginia Beach. 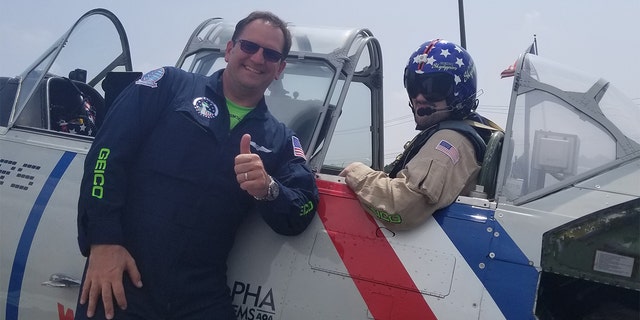 Gooch spoke about how much of an effect World War II made on the future of flying, as many of the tactics and styles used back then are still in use today.

U.S. AIR FORCE: THE HISTORY OF THE MILITARY BRANCH

"It was a very beautiful cemetery," he told Fox News following the flight. "It's the 75th anniversary of V-J Day, the victory over Japan. What's interesting is, the tactics, maneuvers and formations that we do now were taught in WWII. We still use them in the modern Navy and Air Force  Every nation that has an armed Air Force uses the same tactics that we experienced today."

When asked what his favorite part of flying was he said, "The freedom it provides and presenting the awesome traits of aviation like we got to do today -- to share these incredible airplanes from WWII history with the public."

Gooch, who was selected to fly the F-14 Tomcat and had served in Bosnia, said he tended to pray before going up in the air due to the risks involved but added that the danger was just part of the job.

"[I pray before flying] every time, every time," he said, "because I know there are so many people who have lost their lives doing what we do. And, it can happen at any time so I like to be prepared as we go. I pray for the safety of all our teammates, then we go do our thing, come back -- do it again the next day."

He advised any aspiring pilots to trust the older authority figures in their lives and to chase their dreams to the ends of the earth. 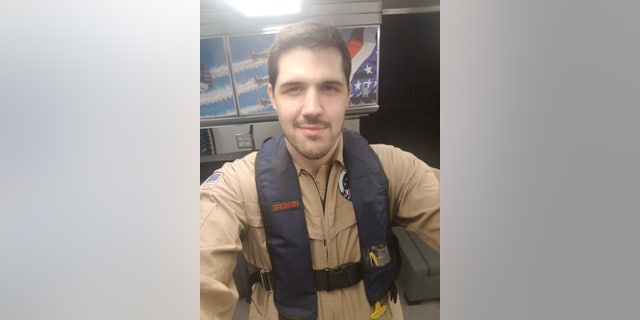 Preparing to take to the skies in honor of America's veterans.

"We've only begun to touch the future. Right now we're looking at going to Mars again -- going to the moon again," Gooch explained. "If you have a dream to fly, chase it. Do good in school, stay in school. It takes drive. It takes the ability to know what you want to do in your life, to have a dream, and then to chase it. You can get your pilot's license at 17, so you don't' have to wait long."

When asked if he had any general advice for today's younger generation, he responded, "It gets better. Invest. Follow your parents, follow your teachers. Don't think it's all bad news, it's good news."

He then stressed how vital it was for young Americans to study the history of the world so they may use that knowledge to help create a future filled with infinite possibilities.

"If I was a young person today, I would study -- and study history," Gooch added. "Study American history. Study global history. Study Biblical history. Learn your history because it is not being taught today. That's how I live my life -- with that view. The sky's not always falling. The sun's coming up every day."

Maccabi entered the Champions League without 11 players due to covid. UEFA allows you to play if there are 13 players from the application
Ole Gunnar Solskjaer: De Gea saved us for years, Henderson did the same today. Lingard played well
The semed said goodbye to Barcelona: Thank you for the opportunity to realize the dream. Eternally grateful
Juve have leased Morata from Atletico for 10 million euros with the right to buy out for 45 million
Barcelona and Atletico have agreed a move for Suarez (Fabrizio Romano)
At the 1950 world Cup, Amateurs from the United States beat England. The coach of the Americans compared their players to sheep, and the author of the winning goal went missing
Dan Henderson made his debut for Manchester United at the age of 23. He made 141 appearances on loan
Source https://www.foxnews.com/us/wwii-pilots-roses-cemetery-new-york

US Voting Systems 'Being Targeted' as Presidential Election Nears

Some 8.7 million eligible Americans may lose out on virus relief payments

NFL coaches rack up $700K in fines for mask violations

Barr, AGs to meet on fragmenting case against Google

‘RHOBH’ star Teddi Mellencamp will not return to Bravo series: 'It feels like a breakup almost'

A Divided America Is a National Security Threat

Liv Tyler Won’t Return To Fox’s ‘9-1-1: Lone Star’ Due To Uncertainties Of Transatlantic Commute Amid Pandemic

Alyssa Milano explains why police were called near her home

With Nothing Else Working, Trump Races to Make a New Supreme Court Justice the Issue

Israel’s next peace deal will be with Sudan

Cindy McCain endorses Biden: He's only candidate 'who stands up for our values'

With Court Prize in Sight, Republicans Unite Behind Trump Once Again

What's on TV Wednesday: Season finale of The CW's 'Coroner'

The Consequence of Elections

All those fancy Broadway costumes are now collecting dust

Ray J says filing for divorce may have been a ‘mistake’

The Russian Trolls Have a Simpler Job Today. Quote Trump.

China Releases Details on Its Own Unreliable Entity List

Why does Cuomo’s team keep screwing up on pandemic unemployment benefits?

The CW's 'Supergirl' ending after Season 6

Stream It Or Skip It: ‘Cosmos: Possible Worlds’ On Fox, Where Neil deGrasse Tyson Examines Human Evolution And Exploration

The Green Party’s Biggest Fan? In Some States, It’s the G.O.P.

9 of Every 10 Restaurants and Bars in N.Y.C. Can’t Pay Full Rent