Twitter on Wednesday was the target of a wild hack.

Hackers gained access to dozens of high-profile accounts, including Barack Obama, Joe Biden, Kim Kardashian, Elon Musk, and Jeff Bezos, a list which includes some of the richest people in the world.

They used the accounts to tweet links to a Bitcoin scam, asking followers to send Bitcoin and promising they'd send double the amount in return. 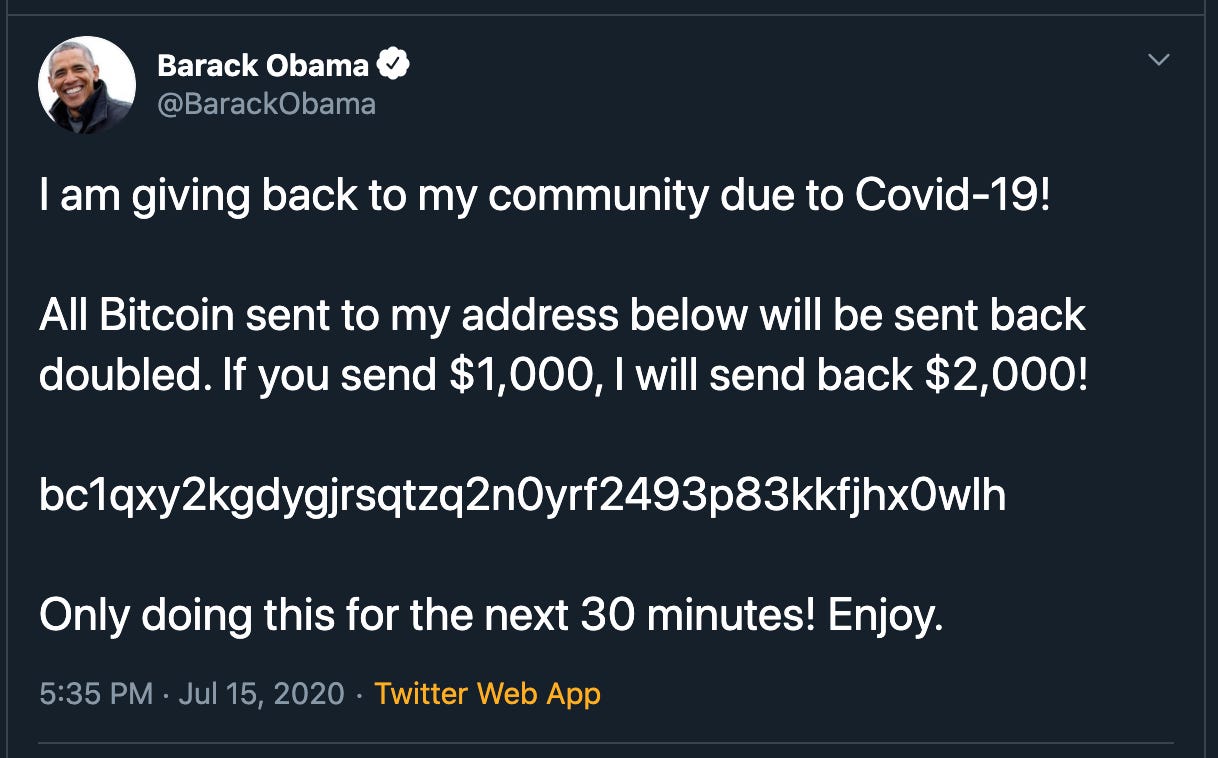 An example of one of the tweets sent out. (Twitter)

It's thought the hackers made away with as much as $120,000, and Twitter had to swing into action, suspending certain accounts and disabling all verified accounts from tweeting.

So how did this happen?

Twitter's investigation is still ongoing, but Motherboard, citing an anonymous source, reported that the hackers bribed an employee in order to gain access to an internal company tool.

Twitter acknowledged that hackers may have accessed internal tools, but appeared to dispute that an employe was bribed:

"We detected what we believe to be a coordinated social engineering attack by people who successfully targeted some of our employees with access to internal systems and tools," the company said.

A social engineering attack is a security term referring to types of attack where individuals are tricked into handing over access to systems or data. It isn't a technical hack, but relies on people failing to spot suspicious behavior. For example, if you got an email from someone impersonating your boss and requesting confidential company information, that would be an attempted social engineering attack.

"It looks like the way this was done was by using the tools inside Twitter to reset contact details and then trigger password resets,"  Alan Woodward, a cybersecurity expert at the University of Surrey, told Business Insider.

Hackers gaining the ability to reset passwords is not an easy attack to counter technically.

Killing the broader account management tool that allows employees to reset passwords might be one option but, as Woodward noted, users could never get back into the service if they were locked out.

Woodward suggested the best way for Twitter to defend against such an attack would be to require more than one employee to sign off on the password reset function.

"If you allow such tools to exist (and it's difficult to see how you'd not) then the only way to stop them being misused by an individual is to have a process in place to make sure you need two people internally to make it function," he said.

Eerke Boiten, cybersecurity professor at De Montfort University, added: " I think the suggestion that an internal tool for managing accounts, including the possibility of resetting account email addresses, was used is credible."

He added this kind of tool would be like a "golden key" if handed to a hacker.

"This hack hints that the level of account regulation requires such a large number of staff with access to the account changing tools that it introduces a security risk via broad access to the 'golden key,'" Boiten told Business Insider.

Another worry is private messages

Woodward said that another worry for the people targeted by this attack is whether the hackers could have read their private direct messages on Twitter.

"As it currently stands DMs [direct messages] are not E2EE [end-to-end encrypted] so any device you log into your account from can access those DMs," said Woodward.

Eva Galperin, cybersecurity chief at the nonprofit Electronic Frontier Foundation, tweeted: "Twitter wouldn't have to worry about the possibility that the attacker read, exfiltrated, or altered DMs right now if they had implemented e2e for DMs like EFF has been asking them to for years."

Twitter has not yet commented on whether it thinks the hackers looked at the compromised accounts' direct messages.

The hack is an unsettling reminder of how users of social media can be powerless to stop attacks on their private accounts.

Woodward and Boiten both said there was no way for regular Twitter users to defend against this kind of attack.

More from Business Insider:
A Norwegian designer created a $13,500 tiny home office with tinted glass to be a perfect backyard workspace — see inside the Studypod
A very pink 1980s mansion in an exclusive desert enclave near LA comes with neon light fixtures and a waterfall bar. Take a look inside.
This company converts shipping containers into $50,000 sustainable, off-grid tiny homes in 99 days — see inside

The Premier League clubs voted against 5 substitutions next season
City has fought back from UEFA and is ready to update: Pep has 300 million on transfers, Ferran Torres and ake have already been taken, and Coulibaly is on the way
I love Fulham. I'm sure it's going to hurt, but it's permanent
Streich-the main thinker of German football: does not watch the Premier League, talks about Dostoevsky and empathy
Dembele worked in the General group of leopards in front of Napoli. He has not played since November
Casemiro on respect for Zidane: I still get excited when I talk to him. It's incredible
Cakir will referee the Barcelona-Napoli match in the Champions League
Source https://www.aol.com/article/news/2020/07/16/heres-how-security-experts-think-hackers-hijacked-the-twitter-accounts-of-jeff-bezos-elon-musk-barack-obama-and-many-others/24563459/

Biden open to scrapping filibuster, but says he can legislate either way

YouTubers the Stokes Twins have been charged for bank robbery pranks

Beirut residents search for missing loved ones: "It might be too late"

‘High Fidelity’ canceled by Hulu after one rocking season

Aimée Osbourne doesn't regret not appearing on 'The Osbournes'

After Isaias rocks Each Coast, more storms on the way

Police: Man spit at boy who refused to remove his mask

NFL partners with three organizations to get out the vote

How NYC plans to restart TV, film and stage productions

Radhika Apte: What I would like to do is just challenge my work constantly

Stream It Or Skip It: ‘The Peanut Butter Falcon’ on Hulu, a Feelgood Charmer and Lazy Southern Parable

WATCH: Biden Says He Wouldn't Stand In The Way Of A Trump Prosecution

What will it take for schools to reopen safely in the midst of a pandemic?

How inequality is changing the Republican Party — and breaking American politics

Terry Dubrow Has an Idea About What Paul Nassif Will Name His Baby Girl & It's Hilarious!

Why Creativity is Key For The Post-Crisis Rebuild

Should You Change Your Home Insurance? This Tech-Forward Company Is Making a Strong Case.

A Bunch of Mice Ran 11 Marathons in Six Weeks

Bill Ford: We have to keep work-at-home healthy for employees

'See you in court': ACLU files nearly 400 cases versus Trump

Ellen Pompeo stuck with 'Grey's Anatomy' all this time for the money: 'I’m financially set'

Masha Gessen on American politics after the death of “truth”

Meghan McCain is Sick of “B.S.” Questions About Leaving ‘The View’: “I Hate This”

Sally Yates is probably ‘on the very short list’ for AG in a Biden administration, Ian Prior says

After Beirut Explosion, Funerals and Fury