Horses stand idle and clowns call it quits as the coronavirus cancels Illinois rodeos. ‘This is the first time ever that we won’t have a rodeo.'

Forty horses are crowded around Lenora Calzavara, their breath hot and their tails swishing.

These aren’t riding horses, waiting for someone to take them out for a trot. These are rodeo horses, bred for their ability to buck riders off in less than eight seconds.

Summer is usually the busiest time of year for the horses, who travel from rodeo to rodeo, throwing off riders and entertaining crowds.

But for months, the horses haven’t done much besides graze on Calzavara’s pasture in Harvard, Illinois. 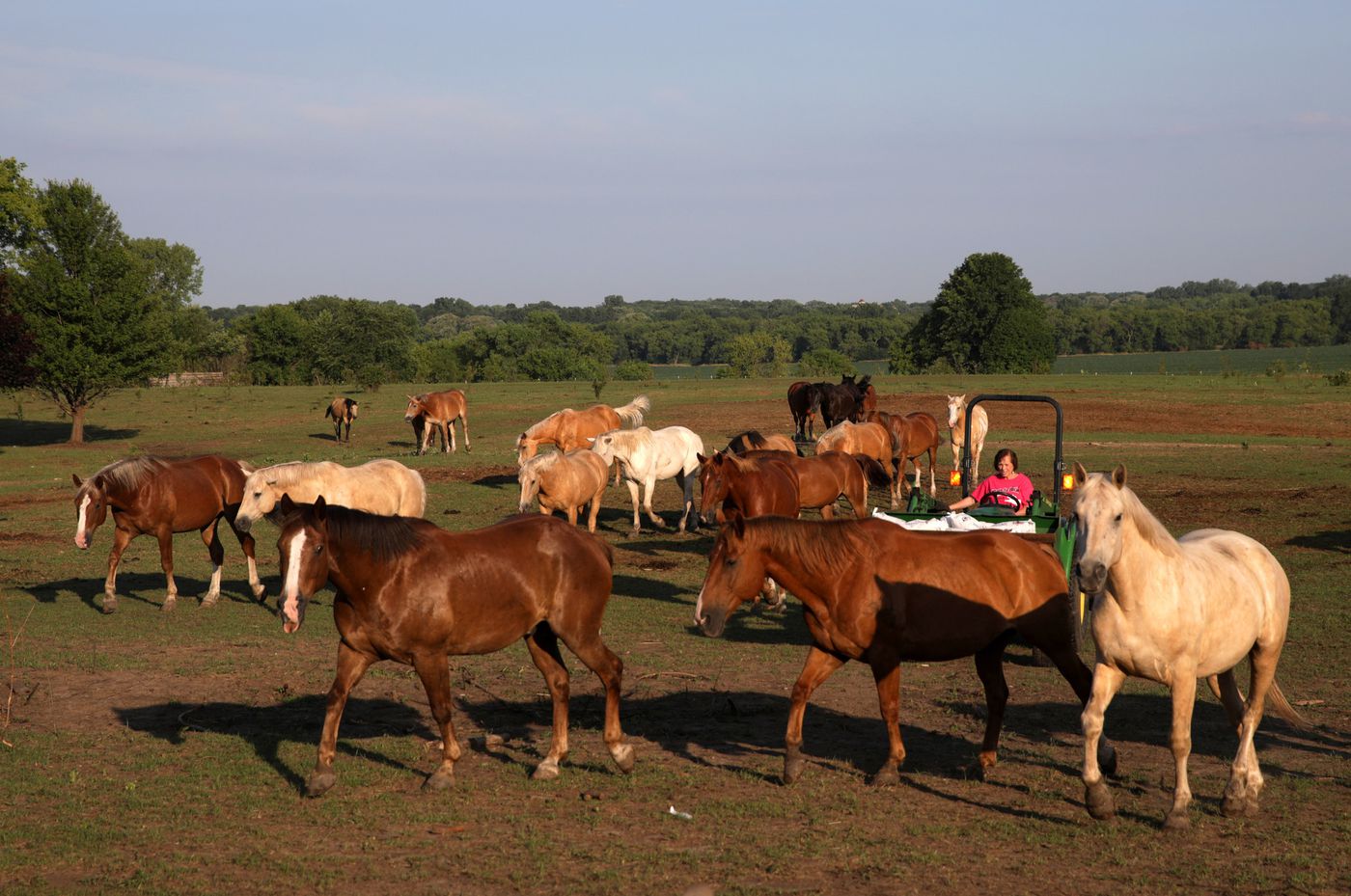 Lenora Calzavara drives a tractor filled with feed into the pasture as her 38 rodeo horses follow along on July 2, 2020. (Stacey Wescott / Chicago Tribune)

“They are all bored to death because this is the first time ever that we won’t have a rodeo,” said Calzavara, owner of Big Hat Rodeo.

None of the 10 rodeos Calzavera had scheduled for this summer will go on, joining other Illinois rodeos called off because of the coronavirus pandemic. The events, often part of county fairs or groups’ annual fundraising, can draw thousands of spectators. Without them, the grandstands are dark and the financial gut-punch reaches far into communities.

Without the rodeo, there are no entry fees or concession sales, the latter of which usually benefit a local group willing to take on hot dog duty. There is no prize money for competitors who come from around the country to try their luck on the back of a bull. And there is no work for the people who work a rodeo.

This year marks the first Fourth of July weekend that rodeo clown Dusty Myers won’t be at a rodeo in 25 years.

Typically, the 38-year-old packs up his trailer and leaves his Mississippi home for between 115 and 130 performances a year.

He pops out of barrels, rides a bull he brings from Mississippi and performs other slapstick comedy. He’s there to distract the audience while the rodeo crew switches from one event to the next.

If Myers had fulfilled his contracts, 2020 would have been his most profitable year yet, with about $116,000 in income, he said. Instead, he’s performed at just two rodeos since March.

Myers started bull riding when he was 13. His dad rode bulls, horses and was a rodeo clown, too. It has always been a part of his life.

“I never thought rodeo would ever quit,” he said. 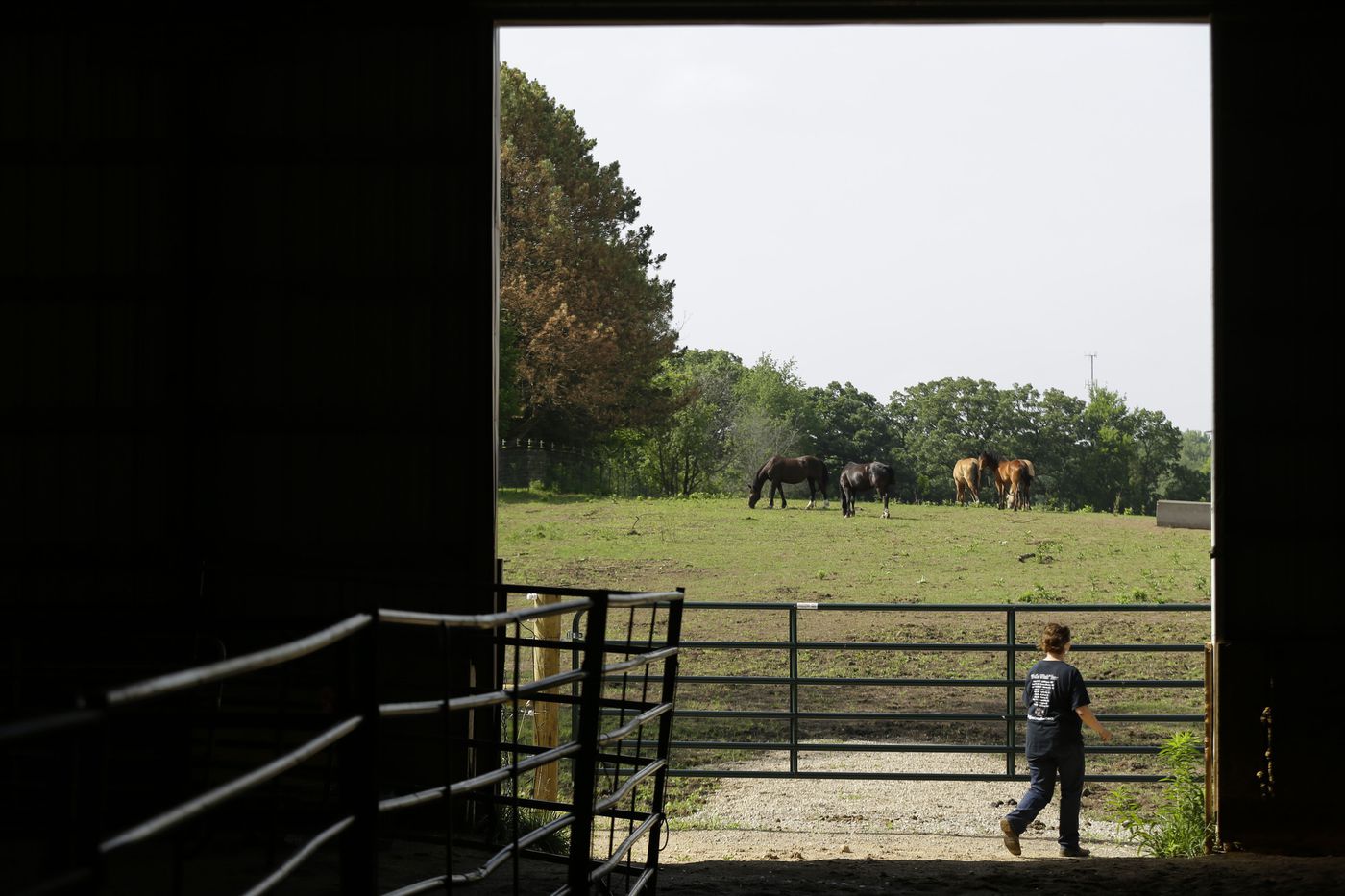 Lenora Calzavara heads out of the barn to check on her rodeo horses at her farm on June 29, 2020, in Harvard. (Stacey Wescott / Chicago Tribune)

In a typical year — which this isn’t — 5 million people attend about 400 rodeos approved by The International Professional Rodeo Association, said Dale Yerigan, general manager of the Oklahoma City-based association. Half of those events have been called off, and Yerigan expects the cancelations to keep mounting.

Last year, the association approved 28 rodeos in Illinois, including Big Hat Rodeo’s shows. Only six rodeos are scheduled to go ahead as planned this year.

“Most of the rodeos have said they truly intend to come back next year,” Yerigan said. “But I worry that some of them may not survive it either, with a year of not being able to raise any funds.”

Big Hat Rodeo has lost $100,000 in income this year, Calzavara said. She’s lucky — she has other income coming in, and can keep the company afloat, at least through this year.

But the costs to maintain her operation are mounting. She moved into a new farm earlier this year and needs to put in a new $75,000 fence. Also, the horses eat more when they’re not working.

Last year, Calzavara’s hay and grain bills added up to $58,000. Grain prices have increased because of the pandemic, and the horses are eating roughly 300 pounds of grain and 1,200 pounds of hay a day, she said. They graze on the grass in the pasture, too.

“They’ll eat down to the dirt, goofballs,” said Calzavara, as she walked through her pasture on a recent morning.

She does not plan to sell her horses, though she is pausing her breeding program this year. It’s no time to add more mouths to feed.

This is not the way 2020 was supposed to go for Big Hat Rodeo.

Calzavara’s paternal grandparents immigrated to the Chicago area from Italy, and when her uncle started attending grade school in the U.S., he couldn’t speak, read or write in English. The teacher sent dime-store Western books home with him, to help him learn the language.

He fell in love with the West, as did his father and they started a rodeo.

“The Italian cowboy who grew up in a suburb of Chicago is kind of weird, but that’s my family,” Calzavara said.

Her basement is filled with black-and-white photos of past rodeo performances. There’s a 30-something Calzavara, thick, dark hair waving behind as she swings her bell-bottomed leg high above her horse, mid-stunt. Another photo shows her father, Rudy Calzavara, holding the rein of his horse with one hand and stiff-arming a bucking bronco with the other. 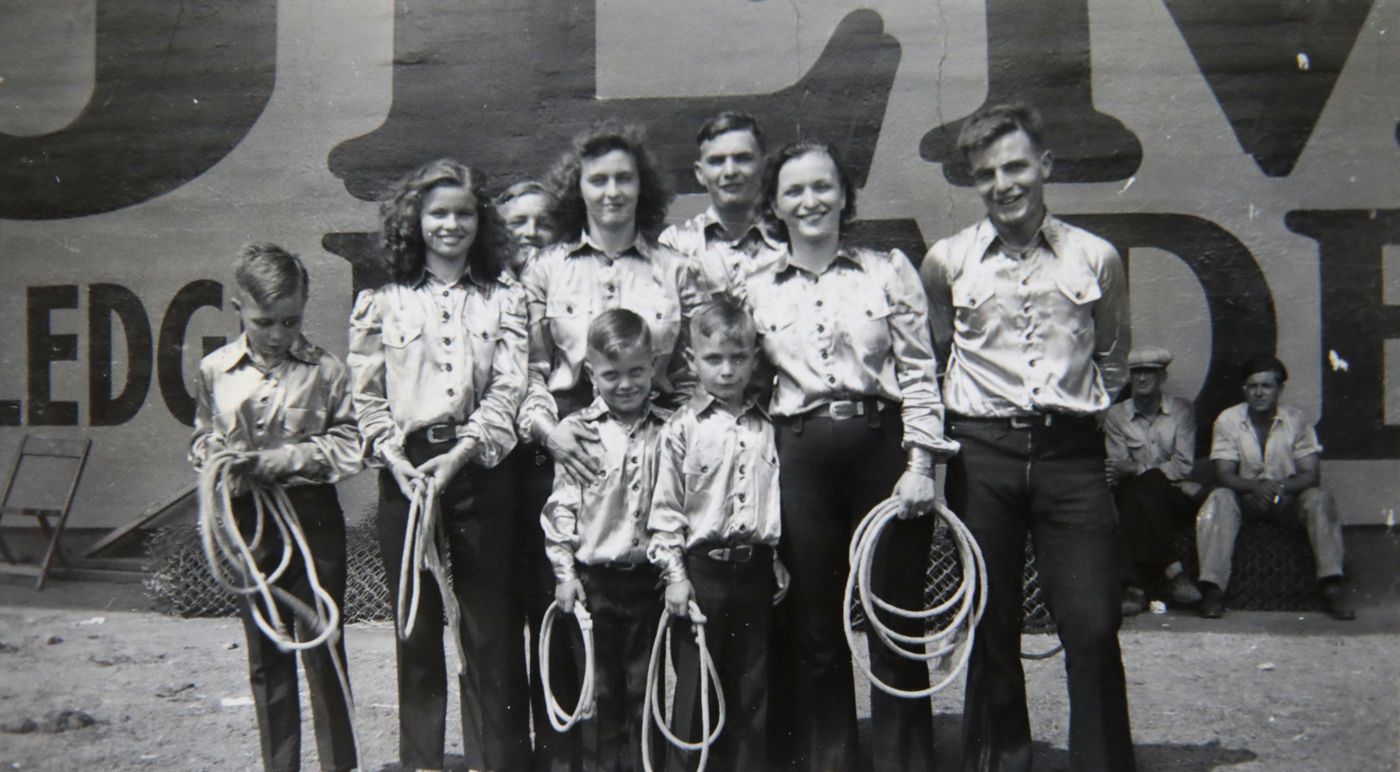 A 1940s photo shows the Graham Western Riders, a family of trick riders from Kansas. Gene Graham, second from the left, married Rudy Calzavara and together they ran the Big Hat Rodeo. (Calzavara family photo) 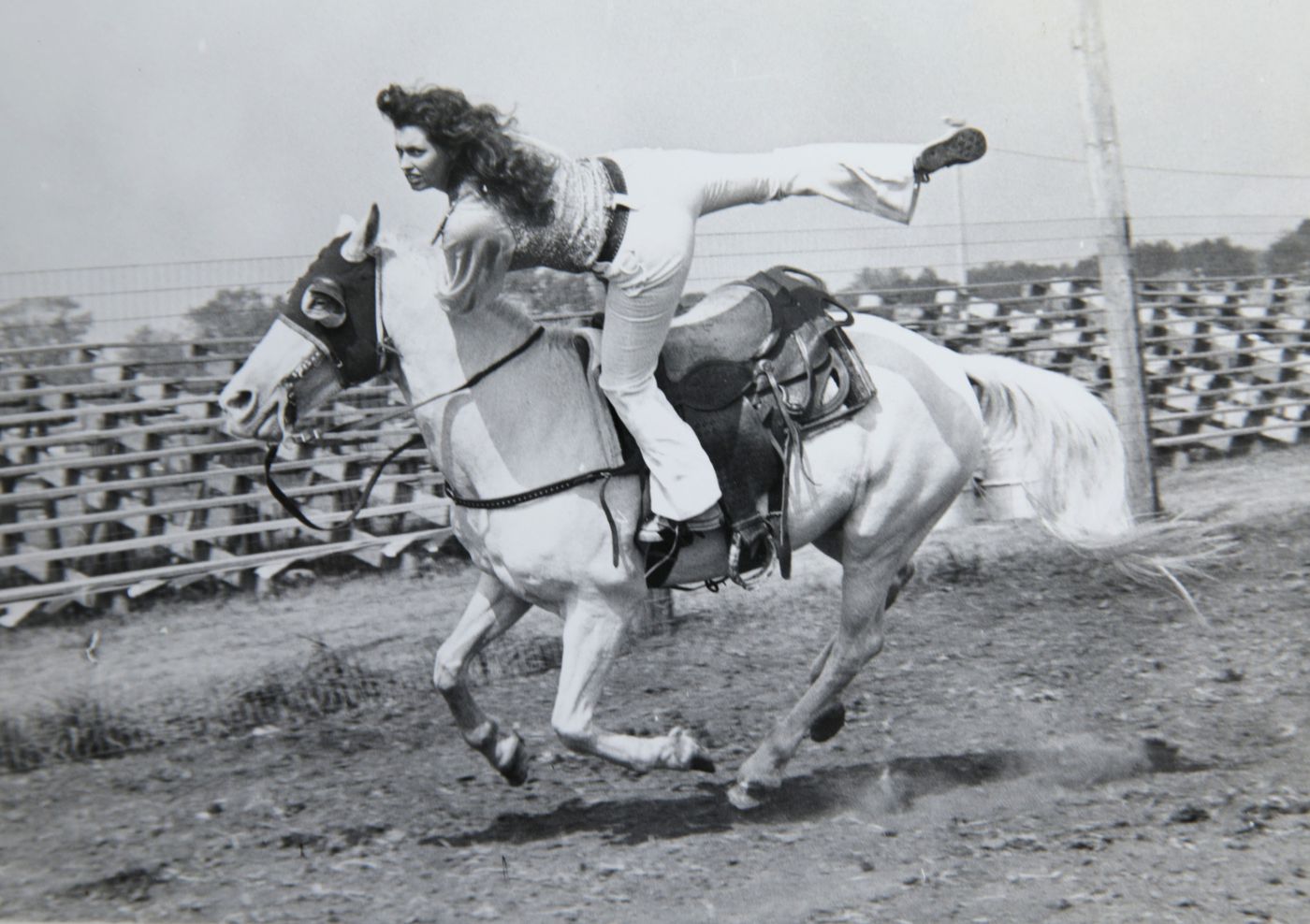 Her mother, Gene Calzavara, grew up in a rodeo family too. There’s a photo of Gene squeezed between her nine rodeo-loving siblings and posed atop a Clydesdale.

Maintaining a century-old legacy is a lot of pressure in a normal year, Calzavara said. This year, the weight is heavier.

“(It’s) not only keeping it together, but trying to make it still grow,” she said. “If it doesn’t grow, it’s going to die.” 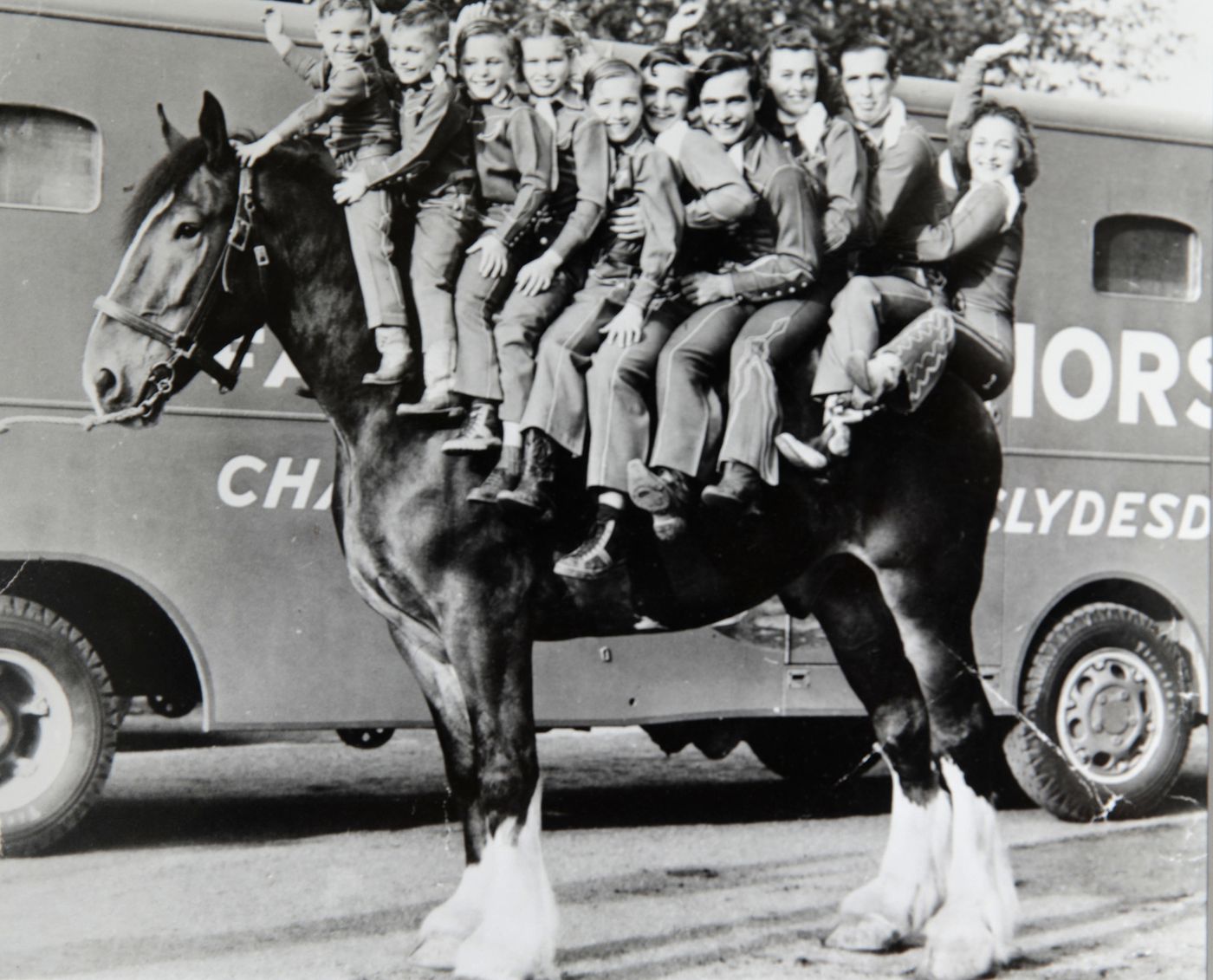 “(It’s) a big draw,” said Carol Magnuson, secretary of Ogle County Fair Board, as she stood among the flowering clover in the grandstand field. “It’s a big thing out here.”

But the fair was canceled this year, and with it, the rodeo. No fair queens will be crowned, no rib-eye burgers served. The 20,000 people that usually make their way through the entry gates of the small county fair will instead stay home.

More than 70 Illinois county fairs have canceled or postponed this year, knowing that it would be nearly impossible to maintain social distancing standards in line for a Ferris wheel, in crowded bleachers or in a livestock barn.

That will be a loss to the state’s economy, and the towns that host county fairs.

Roughly $170 million in spending was tied to 104 Illinois county fairs during the summer of 2014, the most recent numbers available, according to a University of Illinois Extension study. About $91 million of that was spent inside the fair, on food, entry fees and more. The rest was spent on hotels, food outside the fair, transportation, and lodging, among other things.

The study also found that without county fairs, Illinois would see a loss of about 1,000 local jobs a year.

Fair attendees often go on rides, see livestock and stroll the midway. But it’s the grandstand shows — the rodeos, demolition derbies and tractor pulls — that can be the biggest draw for fairs, the study found.

People come from around Chicago and down from Wisconsin to watch. About 120 cowboys and cowgirls from around the country compete.

Calzavara said she has worried about the fairs, along with the people she works with to put on rodeo. She wonders if they’ll have to find something else to do for a living, and what will happen if events can’t come back next year.

“We get so much news on how huge it (the pandemic) is worldwide and country-wide, that we forget how big a difference it is for one business, one family, one person, one company, or a fair,” she said. “I could never have even had a nightmare like this.”

Thomas Tuchel: Mbappe will play Atalanta if nothing happens
Lille acquired 20-year-old forward David from Gent. He is the best sniper of the CONCACAF Cup
Rummenigge on Tiago's departure: If someone offers a fair amount for him, we will work
Juve can offer Arsenal for Lacazette Douglas Costa
Gasperini on Neymar: One of the world's strongest players. He will create problems for any opponent
Tuchel on crutches went to the Champions League match with Atalanta
Chelsea want to sign Ajax defender Tagliafico. He is seen as an alternative to Chilwell
Source https://www.chicagotribune.com/coronavirus/ct-coronavirus-illinois-rodeos-canceled-20200702-oknjavob3fbtvpslcr2coi7squ-story.html#ed=rss_www.chicagotribune.com/arcio/rss/category/news/

Live results for the August 11 primaries

States mull how to carry out Trump order on unemployment aid

Pew poll finds most Latinos haven't heard of 'Latinx.' Only 3% use the term

Airbnb plans to confidentially file for IPO this month

Walmart and Instacart partner for same-day U.S. delivery in fight against Amazon

Big Ten will not play college football in fall

Food bank doles out tons of food as Texans, like many Americans, fight to feed themselves

Big Ten football canceled for fall, will try to play in spring

Outgoing Seattle police chief says it's not about the money, it's about 'lack of respect' for officers

Lebanon's leaders were warned in July that explosives 'could destroy' Beirut, report says

With Congress stalled, a second round of stimulus checks won't be coming anytime soon

More Than 800 Ordered To Quarantine In Georgia School District

Trump and the death of satire

Cuomo Calls on NYPD to ‘Step up’ and Enforce Social Distancing Guidelines in Bars, Restaurants

Trump Would ‘Absolutely’ Fill a Supreme Court Vacancy Before Election

‘It Smells Like Despair.’ A Diary of Life Inside Beirut After a Deadly Explosion

Maryland to drastically reduce number of polling places in November, despite gov's concerns of disenfranchisement

Las Vegas Casinos Are Open At 50% Capacity. What About Las Vegas Hospitals?

$400 in weekly unemployment benefits could be $300 after Trump admin. tweaks plan

Another storm is forming in the Atlantic, but forecasters say it will be short-lived

Column: Mies van der Rohe’s workhorse tower gets a vibrant remake as a dorm at Chicago’s Illinois Institute of Technology

Art, artifacts back on display for Israel Museum reopening

Sources: Big Ten football canceled for fall, will try to play in spring

Serena rallies from set down to advance in Lexington

Lawyer: LA deputies need to be held accountable for tactics

The FDA is recalling some potatoes, lemons, limes and oranges due to potential listeria contamination