Nash Hensley, of South Bend, Indiana, was born with two genetic disorders: achondroplasia, a bone growth disorder characterized by dwarfism, and phenylketonuria, or PKU, which causes the phenylalanine amino acid to build up in the body, according to the Mayo Clinic. PKU is caused by a defect in the gene that produces the enzyme needed to break down phenylalanine, so Nash is required to live on a restricted, low-protein diet.

Hensley's mother, Angela, told CNN she didn't know her son would have either until days after he was born. She said doctors told her they believe Nash is the only child in the United States to have both disorders.

She said that her son had an unusual amount of trouble breathing compared to others with achondroplasia. But after a long journey of surgeries, sleep studies and relying on machines to get enough oxygen, Hensley is doing much better.

He was on oxygen for two years, his mother said, and needed a decompression of his foramen magnum -- the opening in the base of the skull where the brain and spinal cord connect. This opening is smaller in little people, which can make it more difficult to breathe as nerves cannot move around as freely.

"In the first few years of his life he's probably been in the hospital more than what most people will be in their entire life," his mother said. "For the long road that we've had, he's doing quite well now."

Hensley was on a bipap machine for more than a year, then a cpap machine, but is now breathing on his own, a major step achieved within the past six months.

Hensley first found his love for Kenny Chesney when he was around two, his mother said, starting with the country artist's "Cosmic Hallelujah" album. He would listen to Chesney's music before his sleep studies and MRIs at the hospital.

"Whenever he had a sleep study or needed to be put under sedation for his MRIs, because he's had a ton of MRIs, he's always just listened to Kenny to help him get through," Angela said.

Hensley's love for music helped him get through the many trips to the hospital, which is why an opportunity to connect with Chesney's songwriters was something his mother couldn't pass up.

The Nashville-based nonprofit organization Sing Me a Story takes stories written by children in need around the world and connects them with songwriters. Nash naturally wrote about going to a Chesney concert, with the help of his 9-year-old sister, Aleigha.

Their mother said she was humbled the organization wanted both her kids to work on the project.

From storybook to a song 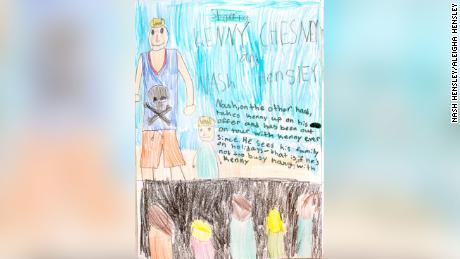 Austin Atteberry, the executive director of Sing Me a Story, told CNN that to say Nash and Aleigha's story "jumped out at us is a huge understatement."

In the story, their family goes to a Chesney concert. Nash brings his ukulele, gets called out on stage and impresses Chesney so much that he gets invited to go on tour with him.

The song inspired by the story, written by the same writers for Chesney's song "Happy Does," was unveiled Friday night at Sound Stage Studios in Nashville.

"It was amazing. I'm almost lost for words," Angela said after her family heard the song. She said Nash has been playing it with his ukulele every since, memorizing the words less than 24 hours later.

Sing Me a Story is working on creating a video for the song, "Ukulele Strummer," which will be available on the organization's website once complete.

#Rareis, a program that highlights the experiences of people living with rare diseases and that partnered with Sing Me a Story on the project, will also have the song on its playlist.

Vaccination against COVID-19 is mandatory for stadium visitors at the 2022 World Cup. Qatar will buy a million doses for visitors
Euro 2020: Group A results
Griezmann about Ronaldo: He is unique and perfect, he inspires all of us. He is a role model
Roberto Mancini: Italy didn't have to win, but we still fought for the victory. This is important
Verratti on the match against Wales: I'm happy. I wasn't sure if I would be able to play in the tournament after my injury
UEFA regarded Neuer's LGBT armband as a team symbol for diversity. Germany will not be punished
Bale on 0:1 with Italy: Wales knew it would be difficult. We defended and ran a lot

Wisconsin Sen. Ron Johnson drowned out by chorus of boos during Juneteenth appearance in Milwaukee

‘Security’ Movie on Netflix: Everything We Know About This Italian Thriller

Prince Charles has no plans to see son Harry when he returns to UK: report

One dead after driver crashes into crowd at Pride Parade in Florida; Mayor calls it terrorist attack

Hotline set up for information on pair charged in road-rage killing of Aiden Leos, 6

Biden to Host Afghan Leaders Amid US Troop Pullout

The Latest: Another US Open disappointment for Mickelson

Suspect charged with murder in death of American woman in Russia

How Airbnb keeps its dirtiest secrets out of the news

1 killed and 5 wounded in shooting in Oakland; motive sought

Vaccinated Republicans are going out far more than vaccinated Democrats

9 children, 1 adult killed in accident on Alabama highway after storm

Officials say cause of deadly Pride parade was accidental

Resilient Lightning expect to bounce back against Islanders

Helen Mirren’s 'Tonight Show' interview was done from a bathtub: 'Favorite place in the world'

US: Iran Nuclear Decisions Will Still Rest with Khamenei

US: Iran Nuclear Decisions Will Rest With Khamenei, Despite Leadership Change