'I do not know this woman': Trump allies rally to Kavanaugh's defense 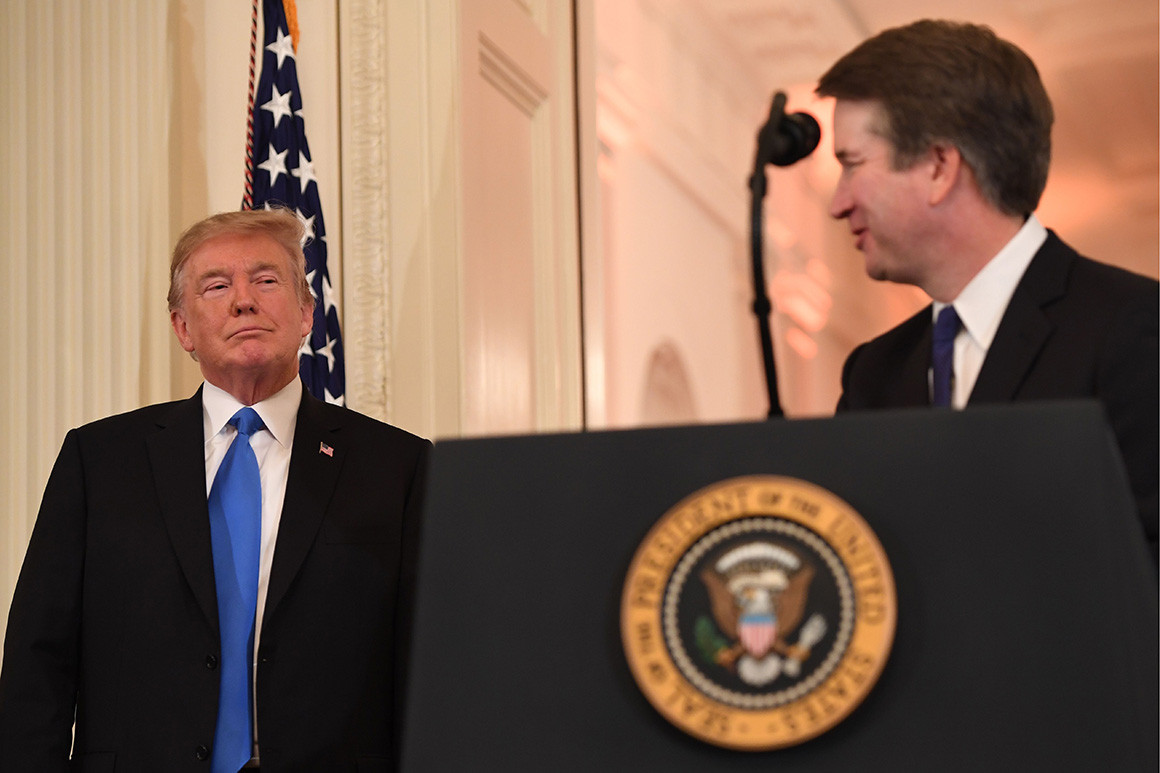 More than half a dozen current and former White House officials or people close to the president said that Donald Trump will continue to stand behind his Supreme Court pick. | Saul Loeb/AFP/Getty Images

President Donald Trump was counting on being able to deliver on one core promise to his supporters ahead of November’s crucial midterms: Locking in a conservative Supreme Court majority.

The White House went into overdrive late Sunday trying to keep that pledge alive, even as Republican senators joined Democrats in calling to delay a committee vote on Brett Kavanaugh’s nomination after Christine Blasey Ford stepped forward to publicly to accuse the judge of sexual assault decades ago.

Immediately after The Washington Post published an explosive story featuring an on-the-record interview with Ford that detailed her allegations, Trump’s allies – both inside and outside the White House – launched a campaign to cast doubt on her account.

More than half a dozen current and former White House officials or people close to the president said that Trump will continue to stand behind Kavanaugh, even as they were increasingly resigned to the likelihood that the Senate Judiciary Committee will be compelled to examine the allegations in detail.

“Of course we’re not going to pull the nomination,” said one White House official involved in the confirmation process after retiring Arizona Sen. Jeff Flake, a member of the Judiciary Committee, told POLITICO that he wasn’t comfortable moving ahead on the original timetable.

Four people close to the White House said they expected Republicans to question Ford’s vague recollections of some parts of the episode and why California Democrat Dianne Feinstein, the ranking member on Judiciary, sat on the accusations for months.

Three of them also said they expect the president – still shadowed by the pre-election “Access Hollywood” tape scandal – to go after Ford rather than to turn on Kavanaugh, who was among the judicial candidates pre-vetted and offered to Trump by the Heritage Foundation. They pointed to Trump’s history of denouncing his accusers and those who accused others, including the women who came forward last year to say then-Alabama Senate candidate Roy Moore had assaulted them years ago.

Kavanaugh’s defenders on Sunday included Meghan McCaleb and Stephanie Conway McGill, two of the 65 high-school acquaintances of Kavanaugh who signed an open letter last week vouching for his character after the allegations were first reported.

Trump has become convinced that many of the negative developments that have plagued his administration are the result of an all-out assault by Democrats to undermine his presidency at any cost, according to the people close to the president. The people close to the president said he’s likely to see the allegations against Kavanaugh as simply another element of the supposed conspiracy against him.

Ford told the Washington Post that Kavanaugh groped her, tried to pull off her clothes and covered her mouth when she tried to scream at a party in Maryland more than three decades ago.

The White House issued the same statement Sunday on Kavanaugh’s behalf that it did last week when the allegations against him first surfaced: “I categorically and unequivocally deny this allegation. I did not do this back in high school or at any time.”

A lawyer close to the White House said the nomination will not be withdrawn. “No way, not even a hint of it,” the lawyer said. “If anything, it’s the opposite. If somebody can be brought down by accusations like this, then you, me, every man certainly should be worried. We can all be accused of something.”
This lawyer added: “It’s not even going to slow him down if that’s all she’s got.”

The lawyer, who was in touch Sunday with White House staffers, pointed at Kavanaugh’s steadfast denials that anything happened: “It’d be one thing if Kavanaugh said I made out with her. But Kavanaugh is saying this didn’t happen. He’s saying this is not true.”

Democrats and Republicans on the Judiciary panel were already at odds over Democratic complaints that Kavanaugh’s nomination was being rushed through with incomplete access to records of his service in President George W. Bush’s White House.

It’s highly unusual for Supreme Court nominees to withdraw. The last to do so was Harriet Miers, who was nominated in 2005 by Bush to replace departing Supreme Court Justice Sandra Day O’Connor. The nomination drew a sharply negative reaction from conservatives, who feared Miers, who was Bush’s White House counsel, was too moderate, lacked a record of originalist legal interpretation and was appointed chiefly because she was a “crony” of the president.

Bush aides were taken aback by the criticism and initially tried to move ahead. But after more than three weeks of withering criticism, the White House pulled the nomination, ostensibly at Miers’ request. Four days later, Bush nominated 3rd Circuit Judge Samuel Alito, who was confirmed after an uneventful three-month process, 58-42.

The Ford allegations have raised stark parallels to the harassment claims made in 1991 by Anita Hill shortly before the scheduled vote on Clarence Thomas’ nomination.

Hill’s gripping public testimony set a potentially dangerous precedent for Trump – though Trump allies said they were confident that if Ford speaks to the committee, it would be in a closed session.

One outside Trump adviser was quick to suggest an effort to have Ford testify publicly amid the ongoing #MeToo wave would backfire on Democrats. “They’re playing a high-stakes game right now,” this adviser said. “You know there are a lot of people in this country who are parents of high school boys. This is not Anita Hill.”

Burgess Everett and Darren Samuelsohn contributed to this report.

This is the best Milan in years: superkambekom with Juve (3 goals in 5 minutes!) saved the intrigue in Serie A
Zlatan Ibrahimovic: I am the President, player and coach! If I had been in Milan since the start of the season, we would have taken the scudetto
Sarri on the defeat by Milan: we played first-class football for 60 minutes. Then-turbidity
Pioli on the victory over Juve: Milan became a team. We can play even better
Pioli beat Juventus for the first time as a coach
Vardy has scored 10 goals for Arsenal in Premier League matches. Only Rooney has more
Ronaldo scores or gives an assist in 17 consecutive Serie A matches, where he scored 25 (21+4) points
Source https://www.politico.com/story/2018/09/16/trump-kavanaugh-allegations-response-826069

Chief Justice John Roberts was hospitalized in June after a fall

Trump Promises To Pressure Governors To Reopen Schools In Fall

University Of California Will Have Its First Black President

DeVos calls out 'adults who are fearmongering' over school reopenings: 'Kids have got to continue learning'

Mental health and police reform: How they intersect in Montgomery County

Can your blood type predict whether you’re more susceptible to coronavirus?

Column: There’s a place for Trump’s proposed ‘National Garden of American Heroes’ — on the scrap heap of history

Over the Hill? Recovered lefty on track for Twins rotation

Prominent Artists and Writers Warn of an ‘Intolerant Climate’

Get These DIY Gadgets into Your Life

Birdwatcher not cooperating with investigation into Central Park ‘Karen’

Rep. McCaul praises Trump's WHO withdrawal, says 'they have one year to get their act together'

Shohei Ohtani back on Big A mound in Angels’ intrasquad game

Pence declines to say if he agrees with NASCAR banning Confederate flag: 'We can learn from history'

Drivers Are Hitting Protesters as Memes of Car Attacks Spread

Cases of coronavirus in Idaho spike after businesses reopen

Andrew Jackson statue loses status in city named for him

Trump Administration Notifies Congress It Will Withdraw From WHO

In New Book, Trump’s Niece Describes Him as Still a Child, Seeking Attention

Gwen Stefani, Gavin Rossdale's son Zuma, 11, broke both arms within weeks of each other: He's 'the toughest'

Trump breaks with Fauci: US in 'good place' in fight against virus