A “Citizens Academy” planned by a branch of U.S. Immigration and Customs Enforcement (ICE), which will include “scenario-based training and exercises,” is spreading alarm among civil liberties and immigration rights organizations — which question why the agency is devoting resources to providing civilians with “firearms familiarization” and instruction in “targeted arrests.”

The program, set to begin in Chicago this fall as “a pilot for nationwide implementation,” will be run by ICE’s Enforcement and Removal Operations branch.

A memo from Robert Guadian, the director of ICE ERO’s Chicago field office, which was obtained by Yahoo News, describes a six-week program (four-hour sessions held once a week) during which “participants will gain insight into the many facets and responsibilities of ICE/ERO operations” through, among other things, “scenario-based training and exercises conducted in a safe and positive environment, including, but not limited to, defensive tactics, firearms familiarization, and targeted arrests.”

Other law enforcement agencies have run similar programs meant to help the public understand their missions, and the Citizens Academy is not intended to create a vigilante corps or deputize civilians to make arrests. Still, the description of this program raised immediate red flags for immigration advocates like Ashley Huebner, associate director for legal services at the National Immigrant Justice Center in Chicago. Huebner told Yahoo News that she and her colleagues were “particularly concerned about the reference to participants receiving training in ‘firearms familiarization’ ... and ‘targeted arrests.’”

“Given our experience with the manner in which ICE conducts arrests, they’re often very untargeted,” she said. 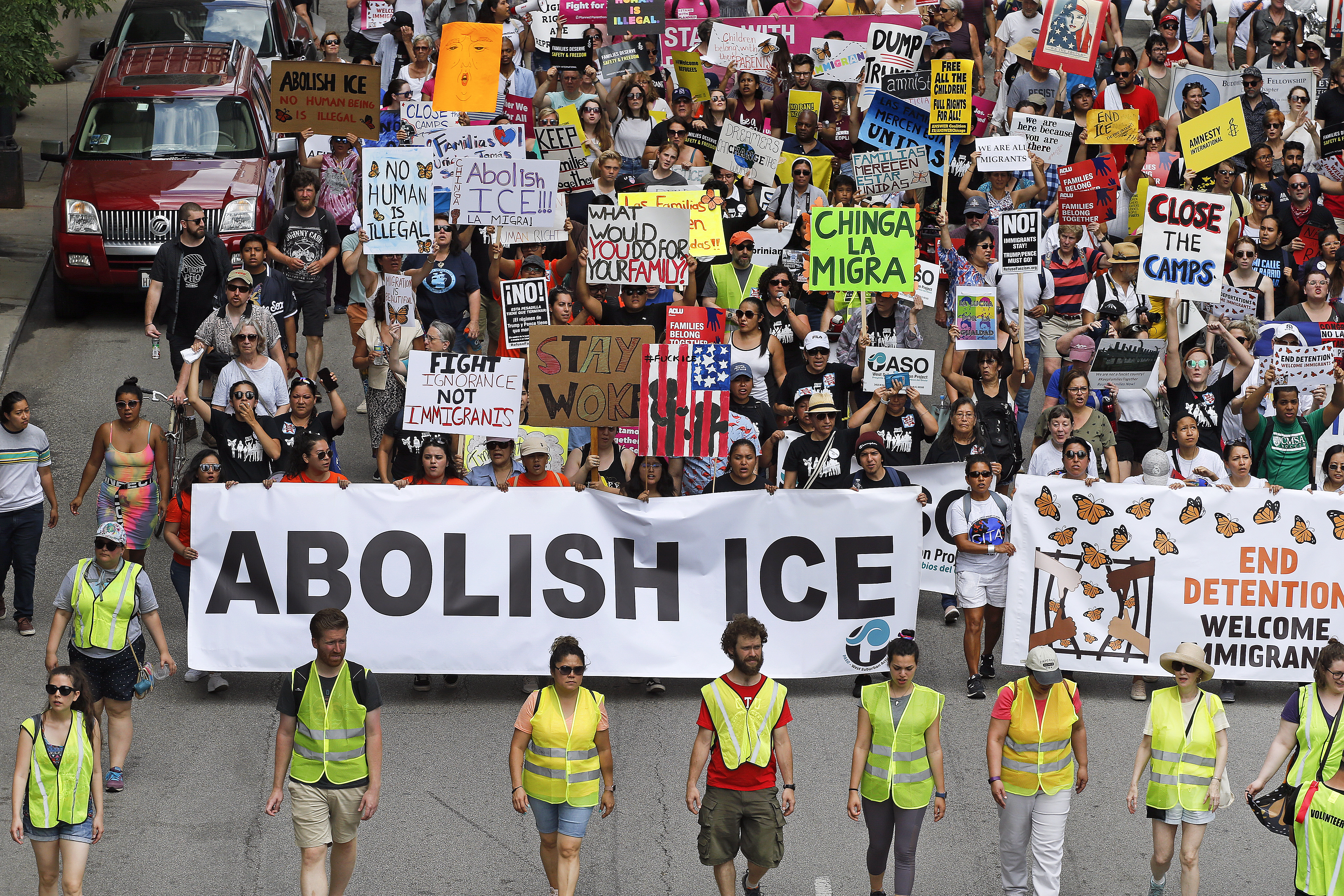 Operating with broad authority and minimal oversight, ICE’s enforcement and removal operations have become increasingly aggressive under the policies of the Trump administration. Agents have been accused of targeting immigrant communities with sweeping, often indiscriminate arrests, the systematic separation of families and inadequate care of those detained in the agency’s network of secretive detention facilities around the country.

“We don’t think they’re going to deputize citizens to go around arresting people,” Huebner said. Still, she said she was troubled by“the idea that someone could attend a training like this and be empowered to report on their neighbors or take some kind of action against their community members who may look different from them or who they may think are from a different country.

In an email to Yahoo News, Nicole Alberico, a spokeswoman for ICE’s Chicago field office, emphasized that “ICE is not training the public to do the work of trained federal law enforcement officers. In fact, we hope by showing members of the community ICE’s process — the why and how an immigration arrest is made — will alleviate fear and misunderstanding of exactly what ICE does.”

Alberico offered little in response to a request for more details on what, exactly, the trainings for defensive tactics, firearms familiarization and targeted arrests would entail.

“Typically, in those academies, there is a demonstration of self-defense and de-escalation tactics,” she wrote in an email, referring to previous citizens’ academies conducted by other law enforcement agencies. She added that “an exact agenda is still being worked out” for the Chicago program. 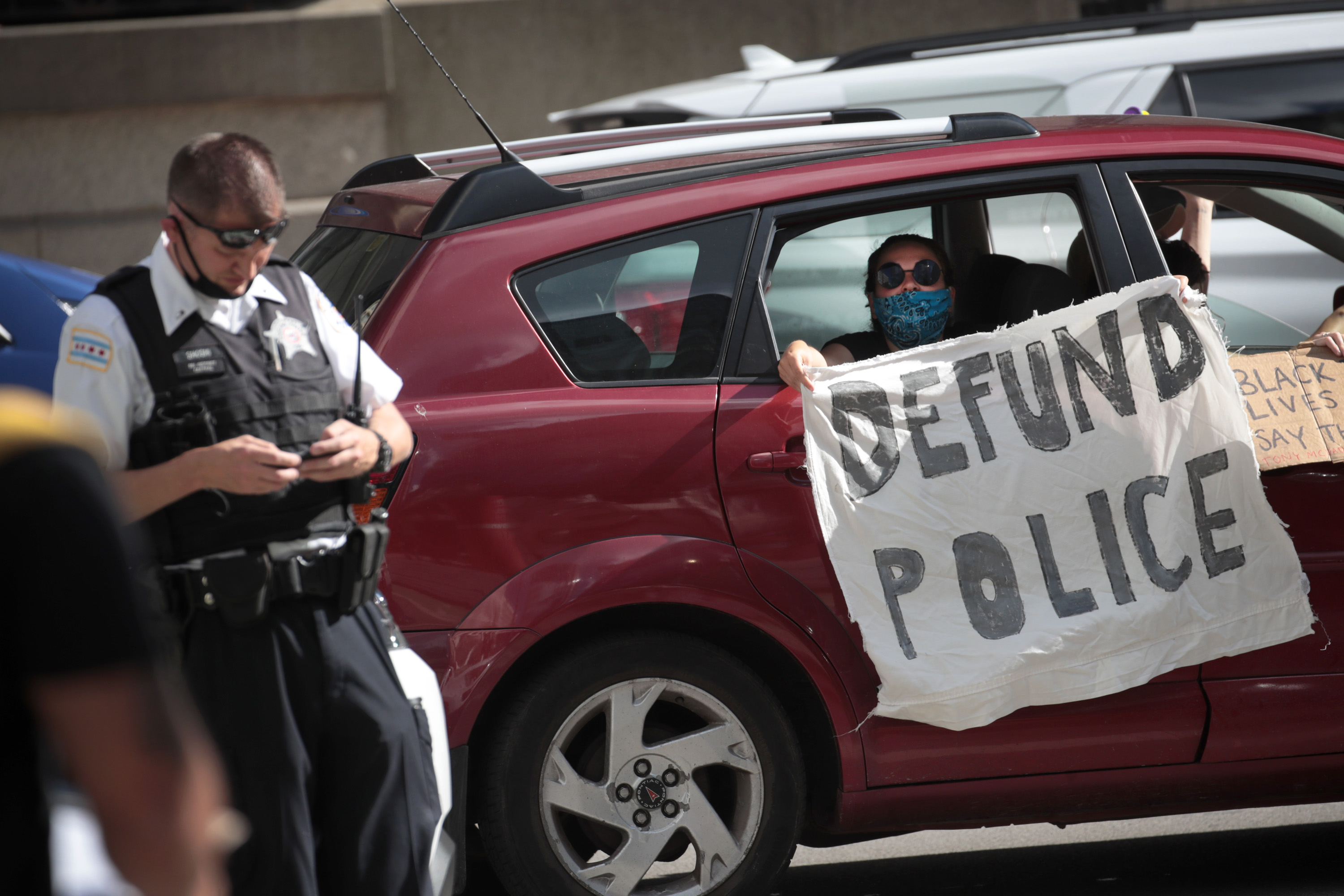 Though the program is a first for ICE ERO, various law enforcement agencies, including local police departments as well as the FBI, DEA, U.S. Customs and Border Protection and even ICE’s Homeland Security Investigations (HSI) division, have conducted citizens’ academies for years as a way to give people an inside look at how they operate and, ideally, help build trust within communities.

Andrea Flores, an immigration policy expert and deputy director of policy at the ACLU, pointed out that the mission and operations of HSI — which is tasked with investigating transnational crimes like human trafficking, child pornography and drug smuggling — are completely separate from those of ERO, which is responsible for enforcing civil immigration violations. (In fact, in 2018, top investigative agents at HSI urged then-Homeland Security Secretary Kirstjen Nielsen to separate their division from the rest of ICE, complaining that the agency’s controversial detention and deportation policies were interfering with their ability to conduct investigations pertinent to national security.)

“We’re concerned that ICE is a rogue agency that already lacks key accountability measures and has a long history of showing a disregard for the human life that’s often in its care,” said Flores, who previously worked at the Department of Homeland Security. She argued that ERO should not be “bringing more people into their practices of these discriminatory enforcement policies that we oppose generally.”

For the ACLU and other opponents of ICE’s immigration enforcement operations, any sort of efforts to engage civilians in such tactics would always be cause for alarm. However, Flores argued that the timing of this citizens’ academy is particularly troubling against the current backdrop of the coronavirus pandemic along with the ongoing nationwide debate over police violence and systemic racism within the criminal justice system.

ICE, Flores argued, “should not be dedicating resources toward training civilians to do immigration enforcement at a time when the ACLU has called for a decrease in immigration enforcement during this pandemic, so that people can continue to access care without fear that they’ll be caught up with ICE on the way to seek medical care, access testing.”

ICE’s intimidating tactics have long cast a chilling effect over immigrant communities, often deterring people from reporting crimes or seeking out necessary public services, including health care. In addition to potentially exacerbating that fear in the midst of a public health crisis, Flores suggested this citizens’ academy will “only increase racial suspicion in our communities at a time when there’s a national backlash against the overpolicing of Black and brown people.”

John Amaya served as deputy chief of staff at ICE under the Obama administration and was at the agency when then-Director Sarah Saldaña first implemented ICE’s community engagement program. He thinks the idea of a citizens’ academy for ERO “could serve a genuine opportunity to engage the community and the community engage the agency in a very constructive way.” However, he said, “given the backdrop of the rhetoric and the xenophobia coming out of the White House, the timing couldn’t be worse.” 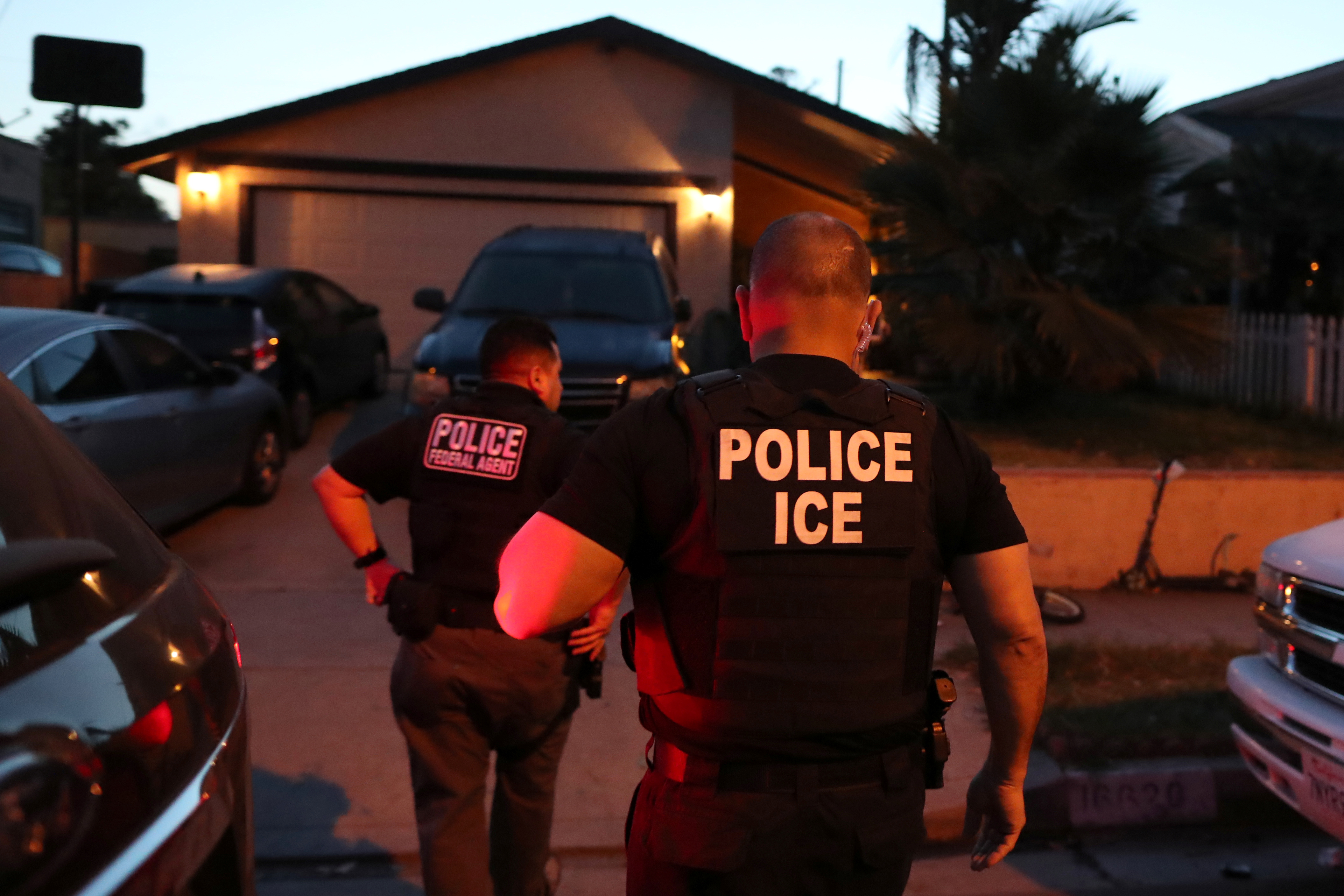 An official ICE statement about the program, which Alberico provided to Yahoo News, does not mention “defensive tactics, firearms familiarization, and targeted arrests” and other subjects of “scenario-based training” described in the memo to prospective applicants. Rather, it states, “the curriculum will include, but is not limited to, classroom instruction, visiting an immigration detention center, learning more about the health care ICE provides to those in its custody, and examining ICE’s role in an immigration case from start to finish.”

The statement also describes the academy as “an opportunity to build a strong foundation of knowledge of an often misunderstood agency and mission” and notes that “ICE is inviting interested participants from a variety of stakeholder backgrounds including: community groups, state/local elected leaders, Congressional staff, consular officials and business and religious leaders.”

According to a Los Angeles Times report on a citizens’ academy held by ICE HSI in 2018, participants included a mix of people, including DHS employees, a congressional staffer and a representative from the archdiocese of L.A., as well as a screenwriter, a mortgage broker and a consultant described as “part of a small but committed tribe of law enforcement citizens academy junkies.”

Applications for the ICE ERO citizens’ academy ask for a variety of personal information, ranging from date of birth and Social Security number to details about how applicants acquired U.S. citizenship (by birth, marriage, naturalization?), the “mission” of their current employer and the names of any organizations or associations they belong to. Applicants are also asked to explain why they want to participate in the training program and consent to a background check that “will include, but may not be limited to, any record of charges, prosecutions or convictions for criminal or civil offenses.”

ICE’s spokesperson did not provide information on where the agency plans to expand its ERO citizens’ academy to after the Chicago pilot program, which is slated to begin on Sept. 15.

Varan is the 1st fielder in 4 seasons in the Champions League, who made 3 productive mistakes in one draw of the tournament
Real Madrid dropped out of the Champions League for the first time with Zidane in charge
Real and Juventus relegated from the Champions League, Manchester City and Lyon reached the 1/4 final
Jesus scored for real after Varane's discount on Courtois
Ronaldo has scored in the Champions League playoffs for 14 consecutive seasons
Real burst under the pressure of city in the 9th minute-Varane was left without options and brought a goal
Benzema came in 4th place among the Champions League scorers, scoring the 65th goal. Only Ronaldo, Messi and Raul have more
Source https://www.aol.com/article/news/2020/07/13/ice-to-launch-citizens-academy-will-teach-civilians-about-targeted-arrests/24559747/

Private equity wants to own your DNA

Is Sabrina Carpenter Really Dancing in Netflix’s ‘Work It’

Why the Coronavirus is More Likely to ‘Superspread’ Than the Flu

'Not A Person Whatsoever': Michigan County Official Defends Use Of N-Word

He reported being assaulted by Minneapolis police. No one investigated.

Ben Affleck To Direct Adaptation of ‘Big Goodbye’ For Paramount; Behind-The-Scenes Story Of The Making of ‘Chinatown’

Coronavirus Take Force’s Dr. Birx tells 9 cities 'get on top of it' as positive cases rise

Coronavirus Tore Through This Meatpacking Plant With Incredible Speed

Endangered Brazilian monkeys get a bridge to themselves

US hiring slows amid signs of longer-lasting economic damage

Trump continues his norm-breaking by campaigning from the White House

Lawsuit against the NRA isn't just for show, it's serious

Gunmen kill at least 20 in village in eastern Burkina Faso

Stream It Or Skip It: ‘Berlin, Berlin: Lolle on the Run’ on Netflix, a German TV Series Gets a Movie Reunion

Is Air Pollution Making You Dumb?

How to get rid of razor burn and ingrown hair

The Infodemic: Are Most Diseases Transmitted by Hand?

Warnings flashed for years of explosives at heart of Beirut

Chris Ortman To Depart MPA As Its Chief Spokesperson

Ship Blamed in Beirut Explosion Hasn’t Sailed in 7 Years. We Found It.

Black, Hispanic Kids Much More Likely To Be Hospitalized For COVID-19

I Worked at a Polling Place for the Michigan Primary. Mask Propaganda Started Early.

Hero bystander drowns after jumping into river to save three children

Pixel 4, Pixel 4 XL officially discontinued in US; what it means

Three Top Executives Are Out at WarnerMedia, HBO’s Parent Company

US hiring slows in July as signs of lasting damage emerge

The Revolution Comes for the ‘Wall of Moms’

When Is ‘Selling Sunset’ Season 4 Coming to Netflix?