Defence Industry in Make in India

Amid the tense situation at the border with China, Defence Minister Rajnath Singh on Thursday approved a proposal for procurement of 21 MiG-29 fighter aircraft, along with upgradation of 59 Mig-29s, and 12 more Su-30 MKI aircraft.

To strengthen the armed forces for defending the borders, the Defence Acquisition Council meeting, chaired by Rajnath Singh, accorded approval for capital acquisitions of various platforms and equipment required by the three services.

"Proposals for an approximate cost of Rs 38,900 crore were approved," a Defence Ministry statement said. India has test-fired a longer-range BrahMos supersonic cruise missile that can hit targets as far away as 500km from a Sukhoi-30MKI (Su-30MKI) air superiority fighter plane.twitter

While the MiG-29 procurement and upgradation from Russia is estimated to cost Rs 7,418 crore, the Su-30 MKIs will be procured from HAL at an estimated cost of Rs 10,730 crore.

Focused on indigenous design and development, these approvals include acquisitions, amounting to Rs 31,130 crore, from Indian industry.

These equipment will be manufactured in India by the Indian defence industry with participation of several MSMEs as prime tier vendors.

The indigenous content in some of these projects is up to 80 per cent of the project cost.

A large number of these projects have been made possible due to the transfer of technology by the Defence Research & Development Organisation to indigenous industry. 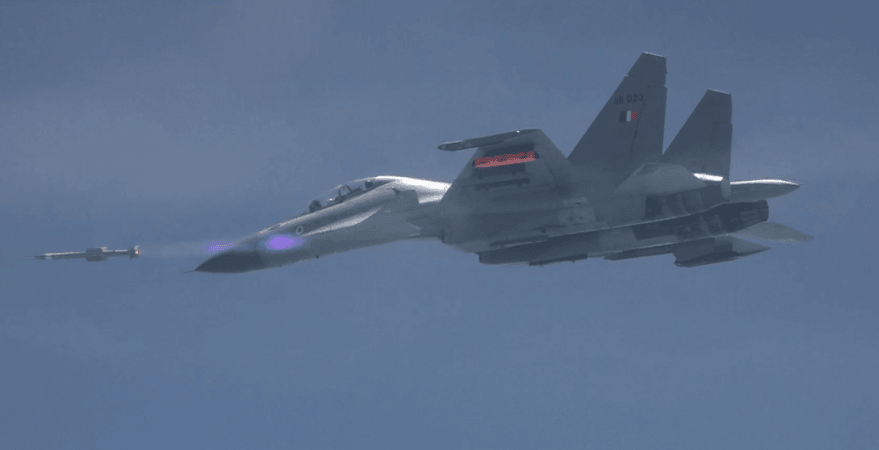 These include Pinaka missiles, BMP armament upgrades and software defined radios for the Indian Army, and long-range land attack Cruise missile systems and Astra missiles for the Indian Navy and Indian Air Force.

The cost of these design and development proposals is in the range of Rs 20,400 crore.

Acquisition of new and additional missile systems will add to the fire power of three services.

While the acquisition of more Pinaka missile systems will enable raising additional regiments over and above the ones already inducted, addition of long-range land attack missile systems having a firing range of 1,000 km to the existing arsenal will bolster the attack capabilities of the navy and the IAF.

Similarly induction of Astra missiles having beyond visual range (BVR) capability will serve as a force multiplier and immensely add to the strike capability of the Indian Navy and IAF.

(With inputs from IANS)

A video of homophobic slurs against Chelsea fans was removed by a bookmaker after criticism from the club's LGBT fans
Lazio will play in the 2020/21 Champions League thanks to Roma's relegation from the Europa League
Zidane about the game with Manchester City: real are at a disadvantage, this match is like a final
Maurizio Sarri: My future at Juve does not depend on the match against Lyon. Otherwise, the management will present themselves as Amateurs
Norwich refused to sell defender Lewis to Liverpool for 10 million pounds
Maurizio Sarri: Lyon has improved. Juve will have a difficult match
Zinedine Zidane: bale chose not to play, the rest is between us
Source https://www.ibtimes.co.in/india-rushes-buy-fighters-amid-border-standoff-china-21-mig-29s-12-su-30-mkis-823708

‘Knight Rider’ movie with a ‘present-day take’ in the works

The gruesome aftermath of Tucker Poolman blocking shot with his face

COVID-19 could cause your hair to fall out

‘A League of Their Own’ series headed to Amazon

How An American Pickle’s Pickler Pickled Its Pickles

How Music Could Become a Crucial Part of Your Sleep Hygiene

Beirut in crisis after deadly explosion. Here's what's being done to help.

Astros vs. Diamondbacks prediction: Arizona has the advantage

Brad Keselowski, chasing a championship, looks to finally break through at 'special' MIS

Consider This Before Self-Publishing Your Book

Big tech stocks could fall sharply if there's a vaccine

Listen to Episode 16 of ‘Pinstripe Pod’: Should Yankees Be Concerned With Starting Pitching?

Multiple sclerosis drug to be studied for COVID-19 treatment

Trump Is Plotting Against the Census. Here’s Why.

US State Department lifts global 'Do Not Travel' advisory

Trump claims Biden is 'against God' and will 'hurt the Bible'

What happens if there’s no clear winner?

Whitmer expands mask mandate to kids 4 and up in child care centers, camps

The Special Sauce That Makes Some Vaccines Work

As Trump attacks the mail, his administration gains more access to the Postal Service