Indywood Film Carnival 4th Edition to be held from December 1 to 5: Highlights of IFC 2018

The 4th edition of the prestigious All Lights India International Film Festival (ALIIFF) will be held at PVR Inorbit Mall, Hyderabad from Dec 1-4, 2018.

Indywood Film Carnival (IFC), the much-anticipated entertainment fiesta of the year, will be held at HITEX Convention Centre from December 1 to 5. The Carnival is expected to accelerate the growth of Indian Film Industry through materialising big-budget movie projects, co-production ventures and B2B meet generating business worth Rs 500 crore. Indywood Film Carnival is a part of Hyderabad joy.

The fourth edition of Indywood Film Carnival (IFC 2018), a flagship venture of $10 billion Project Indywood, aims to elevate Indian cinema to an international level. IFC 2018 will be a one-stop platform for showcasing the latest technology and future possibilities in the entire spectrum of filmmaking, skill development, pre-production, production, technical support, post-production, distribution, marketing and release among others. 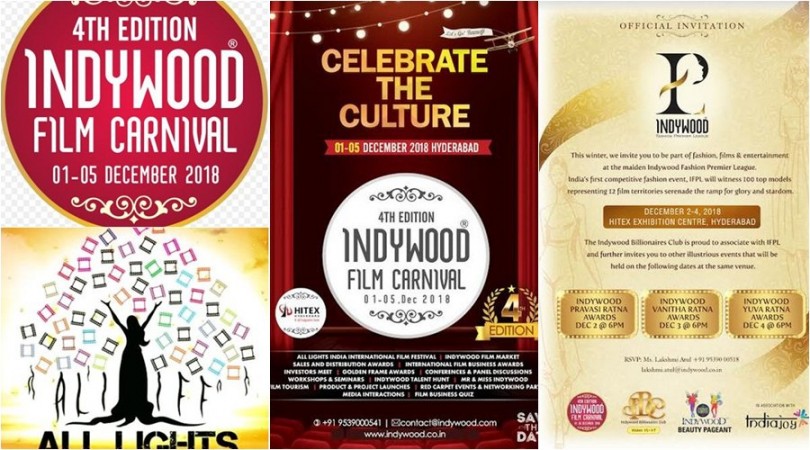 "Our country is blessed with talented actors and technicians. The natural next step is to deploy these talents and concentrate on making movies which appeal to the international audience. Baahubali is a perfect example. The movie industry will fetch huge gains if we increase the number of international projects by using advanced technology and worldwide distribution. Indywood Film Carnival is an attempt to educate stakeholders about the importance of such projects. The entire industry, including actors, technicians, producers and distributors apart from State/Union Governments should come forward to support this desi initiative," he said.

Hyderabad holds the Guinness World Record for the largest film production facility in the world. Moreover, Prasad's IMAX in Hyderabad is one of the largest 3D IMAX screens and the most attended cinema screen in the world. And to top it off, Bahubali, the highest all-time grossing movie sequel in India (combined gross collection of $376.2 million) was produced from the Pearl City. Project Indywood's mission is to transform Hyderabad as the hub of Indian Film Industry.

The annual event is expecting the presence of 5,000 business delegates from across 100 countries. Business to the tune of Rs 500 crore is expected to be generated by way of signing up of big-budget movie projects, co-production ventures and B2B agreements. Indywood Billionaires Meet, Indywood Academy Awards, Indywood Telly Awards, Indywood Fashion Premier and All Lights India International Film Festival are the major attractions of IFC 2018.

The flagship event of Indywood Film Carnival, All Lights India International Film Festival will screen over 100 movies from nearly 50 countries. Cinema lovers can expect a grand visual experience with PVR Inorbit Mall set to open all its four theatre screens for the film festival. The films will be screened in top quality screens with the famous PVR service experience offered in full. At least 16 movies will be screened per day and the films will include premieres of national and international films.

The 4th edition of ALIIFF will see the screening of feature films along with a long list of must-watch short films and documentaries from across the world. There will be most awaited films from the World Cinema and the movies from this year's Oscar race too. A tribute segment to the legendary Iranian director 'Abbas Kiarostami' is another highlight of the festival. Celebrity red carpet walks, exclusive Media Interactions and Q&A sessions with the industry's leading directors and celebrities of these festival movies will also be held at the venue during the festival.

The Indywood Film Market (IFM) expo will be a platform to connect with major stakeholders in the film industry. From technology providers to developers, from production agencies to distribution theatre owners would be participating.

The IFM 2018 will see a host of interactive sessions, diverse exhibition arenas, B2B awards function and high profile networking parties. The three-day (Dec 3-5) event will be held at India's top business expo venue, the HITEX Convention Centre, in the heart of Hyderabad.

The inauguration of Indywood Billionaires Club was the major highlight of Indywood Film Carnival in 2017. Since then, IBC has turned out to be of prime significance as a body uniting India's greatest business tycoons to revolutionize the country's entertainment Industry and is as the name suggests, a part of the $10 billion project Indywood. Indywood had recently launched its Kerala and Dubai Billionaires Club chapters.

Simone Biles Is Already the Best Gymnast Ever. She’ll Be Even Better for Tokyo

Yankees' Zach Britton on substance checks: 'Optics are absolutely embarrassing for our game'

Delta Plus: India raises alarm over a new COVID mutant

Antivirus Pioneer John McAfee, Who Spent Years on the Run, Dies in a Spanish Prison at Age 75

Lt. Dan at It Again: Gary Sinise and Home Depot Founders Team Up To Help Vets With Invisible Wounds

How to start a business without money ... and in five steps

Africa Is Running Out Of Oxygen

Op-Ed: The Supreme Court Has Handed a Win To College Athletes, But It Is Only the Beginning

Russia says next time it may fire to hit intruding warships

Dem Rep Describes 'Awkward Silence' During Encounter With Biden: He 'Just Sort of Stared at Me'

Nurse fired for refusing COVID vaccine: 'We worked so hard...and they're kicking us to the curb'

A multi-story building near Miami has partially collapsed

Pennslyvania town tells 'Mare of Eastown' fans to stay away

Bank of England keeps UK rates at record low of 0.1%

Is statehood the answer to Puerto Rico's problems?

‘Fed Up’ Chip Gaines Tells Joanna To Stop Treating Him ‘As A Punching Bag’?

4 Ways to Protect your Health After the Pandemic

Losing Loved Ones In The Pandemic: Dealing With Delayed Grief

Lawyer says death of McAfee surprised the US mogul’s family

A 'tough nut to crack': States race to vaccinate young adults against Covid-19

See the 'strawberry' moon, the last supermoon of 2021

Russia says it may fire to hit intruding warships

Learning a Language Can Make You a Better Entrepreneur

UK says it would sail into Crimean waters again, a day after naval confrontation with Russia

UK says it would sail into Crimean waters again, a day after confrontation with Russia

The Latest: Infections, deaths continue to soar in Russia

Valerie Biden Owens, the president's sister, has a book deal

As The Pandemic Recedes, Millions Of Workers Are Saying 'I Quit.'