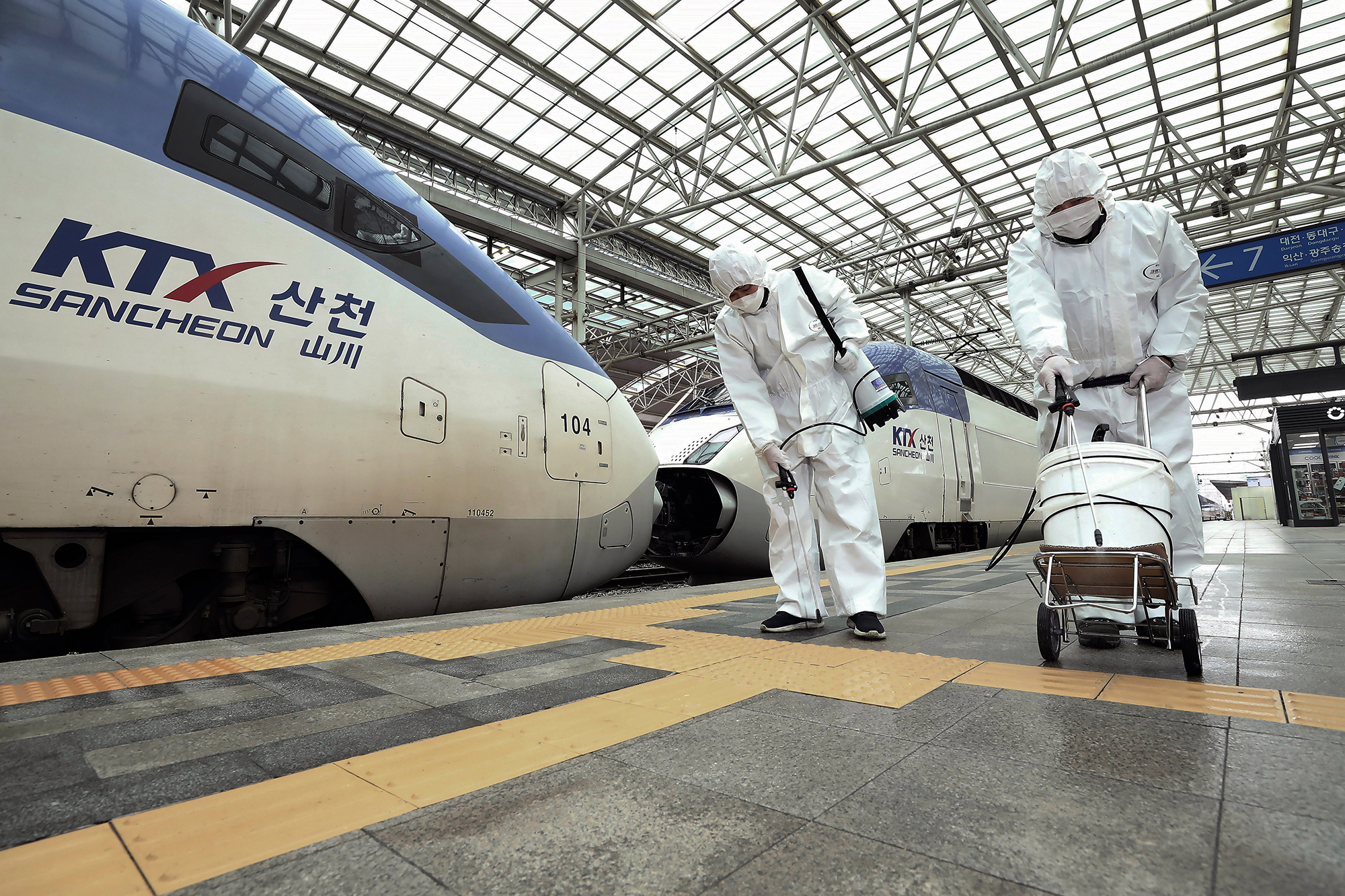 At least seven European countries have reported their first cases of novel coronavirus in the past two days, as the outbreak spreads across the world.

Elsewhere in Europe, Italy is struggling to contain its outbreak -- the largest outside Asia. Meanwhile, authorities in the Middle East are also racing to contain the virus spread.

In Asia, the epidemic is far from over -- South Korea has reported its largest number of new infections yet on Thursday.

What you need to know: 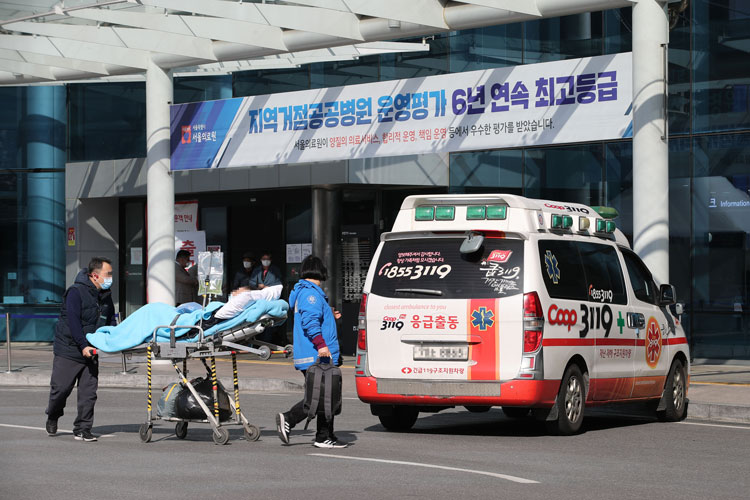 Patients are moved from Seoul Medical Center to other hospitals, in Seoul, South Korea, today. Yonhap has blurred this image to protect the identity of the individuals. Yonhap/EPA-EFE/Shutterstock

South Korea has announced another 171 cases of the novel coronavirus, bringing the total to 505 in the past 24 hours.

It is the largest jump in one day for South Korea since the outbreak began. In total, there are now 1,766 infections across the country, which has left 13 people dead.

Out of the 171 new cases, 115 are from Daegu and 24 are from the North Gyeongsang province that surrounds the southern city. 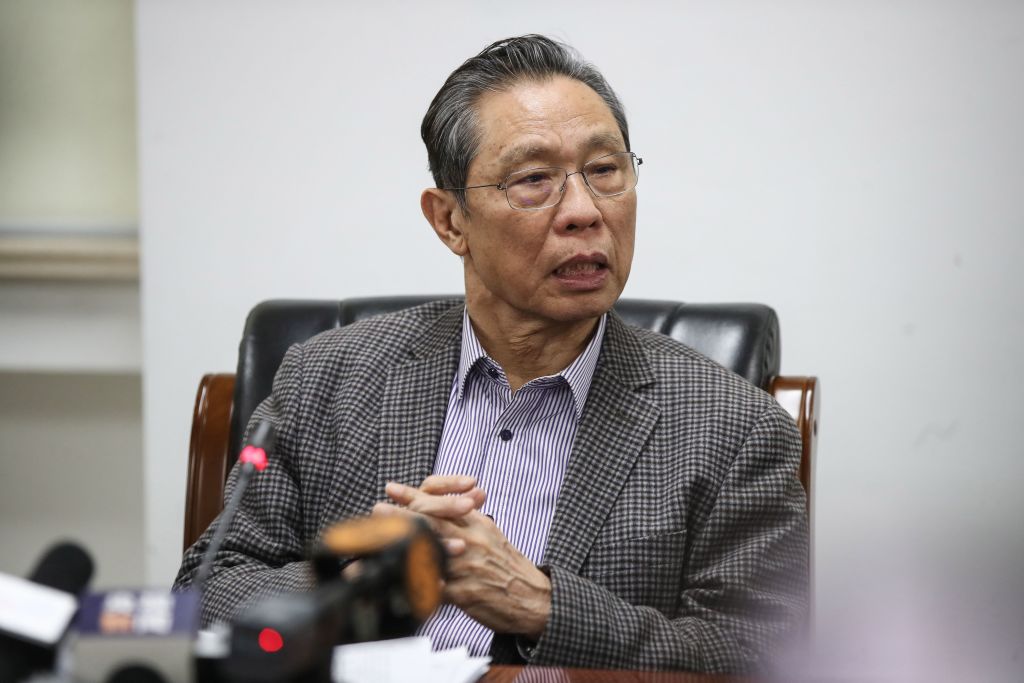 Zhong Nanshan speaks at a news conference in Beijing on January 20. Stringer/AFP/Getty Images

A top Chinese respiratory expert says he is confident “the epidemic (will) be basically under control at the end of April.”

Speaking a news conference on Thursday, Zhong Nanshan, the director of China’s National Clinical Research Center for Respiratory Disease, said he had so far reasonably accurately projected the course of the virus.

“We previously predicted that the peak should be in mid or late February, it turned out the number of new cases began to drop after February 15. We predicted the number would be 60-70 thousand, and now it is 78-79 thousand in China," he said.

The Chinese expert said that his original global projections regarding the outbreak had needed to change due to the increased cases outside of China.

New job for Zhong: iPhone maker Foxconn announced this week that it had appointed Zhong as a chief consultant to the company as it continues to resume operations at facilities throughout China.

Zhong is seen as one of the heroes in China’s battle against severe acute respiratory syndrome (SARS) in 2003, and is also currently leading the country’s national research team on the novel coronavirus outbreak.

A man in his 80s has become the eighth person in Japan to have died from the novel coronavirus since the outbreak began.

Local government officials in Hokkaido announced the death today, saying the patient had died from pneumonia. He tested positive for the virus on February 22.

The victim was from a town called Shiriuchi in Hokkaido and had no known links with the Diamond Princess cruise ship.

He also had not traveled abroad recently, making it unclear how he caught the virus.

Mask production stepped up: At least 186 cases of the coronavirus have been detected in Japan outside of the Diamond Princess.

Speaking at a news conference today, Japan's Cabinet Secretary Yoshihide Suga announced the government has asked manufacturers of masks nationwide to work around the clock to provide face masks for the public.

He said the government will attempt to increase production of masks from 100 million in January to 600 million in February.

The government spokesperson urged people to only buy the masks if they they need them, due to shortages. 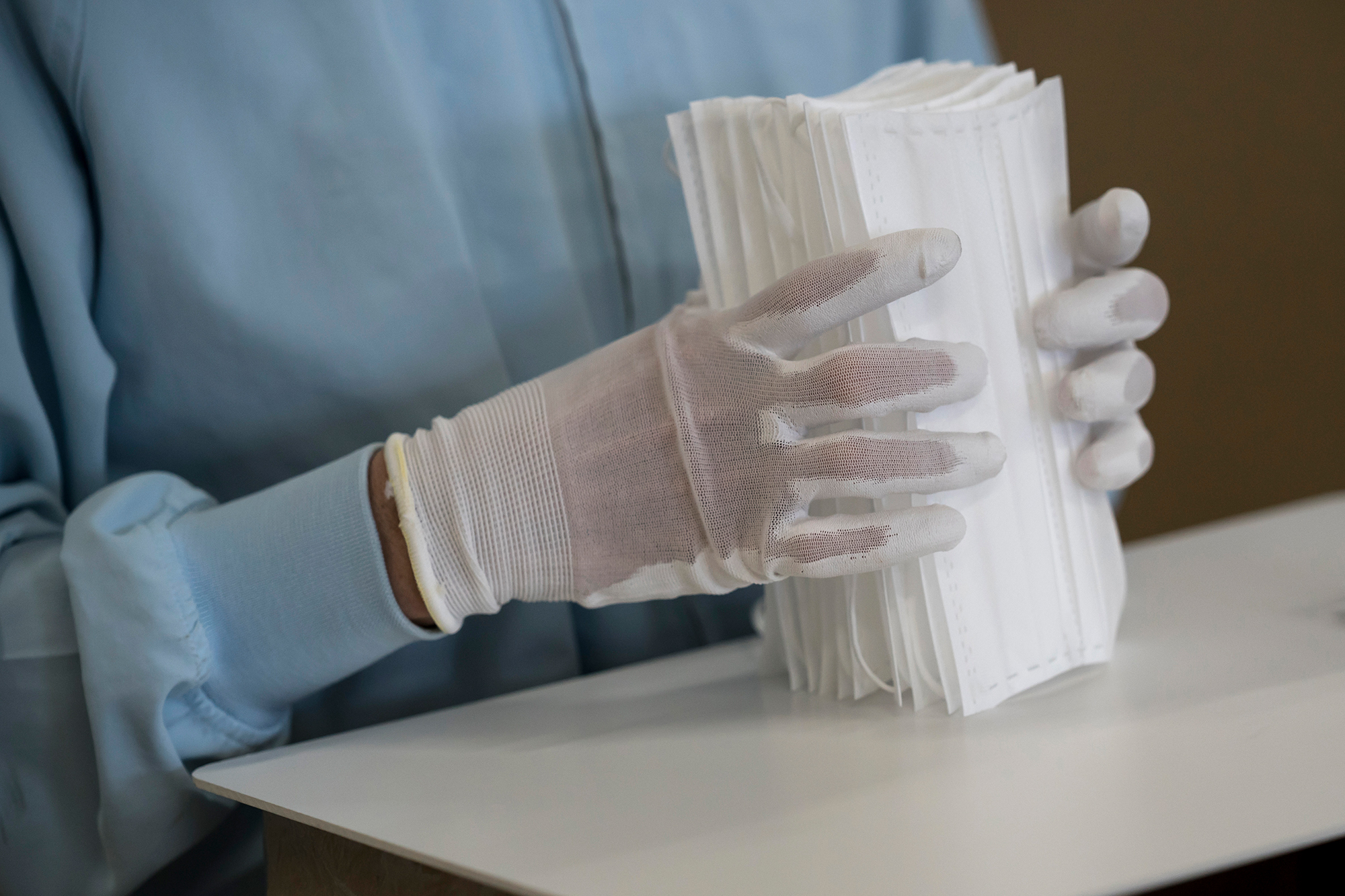 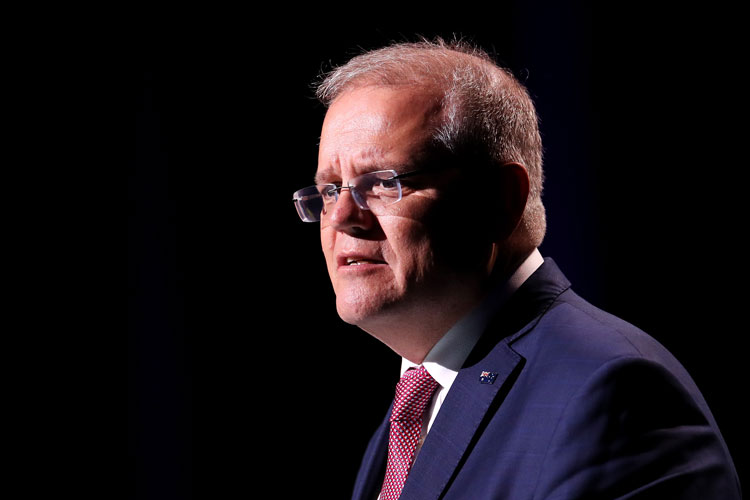 Australian Prime Minister Scott Morrison said while the risk of a global pandemic is growing, there is no need yet for Australians to avoid large public events.

“As a government, we need to take the steps necessary to prepare for such a pandemic," he said at a news conference today.

He said that this was all possible because Australia had "acted quickly" to avoid further infections.

Travel ban reinstated: As part of those precautions, Morrison said Australia would extend its travel ban on mainland China for another week. Australia has barred any travelers entering from or having transited in mainland China since early February.

Morrison added that “further travel bans are not recommended” and the bans are reviewed on a weekly basis. Australia has 22 cases of the novel coronavirus, 10 of whom have already recovered. 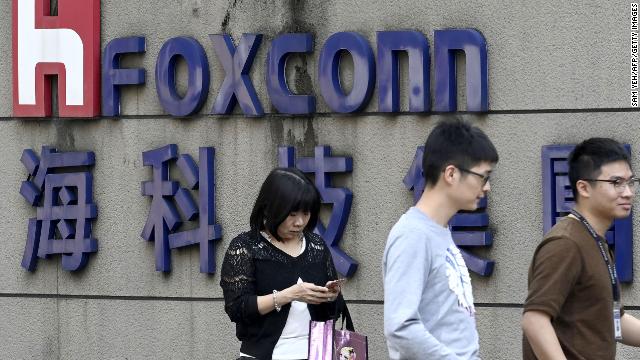 People walking past a Foxconn sign in Taipei in January 2019.  Sam Yeh/AFP/Getty Images

Foxconn, a major electronics maker and supplier to Apple, has started making surgical face masks for all of its factory workers.

The Taiwanese tech giant said in a statement today that it had ramped up production significantly to meet its internal requirements of making approximately a million masks per day for employees at its facilities.

“Having previously dealt with SARS, Foxconn has a good understanding of how to care for our employees’ health and how we will need to allocate resources in the manufacturing and production departments,” the company told CNN Business earlier this month.

“We have measures in place to ensure that we can continue to meet all global manufacturing obligations.”

Foxconn also announced this week that it had appointed Zhong Nanshan, a renowned respiratory scientist, as a chief consultant to the company as it continues to resume operations at facilities throughout China.

Zhong is seen as one of the heroes in China’s battle against severe acute respiratory syndrome (SARS) in 2003, and is also currently leading the country’s national research team on the novel coronavirus outbreak. 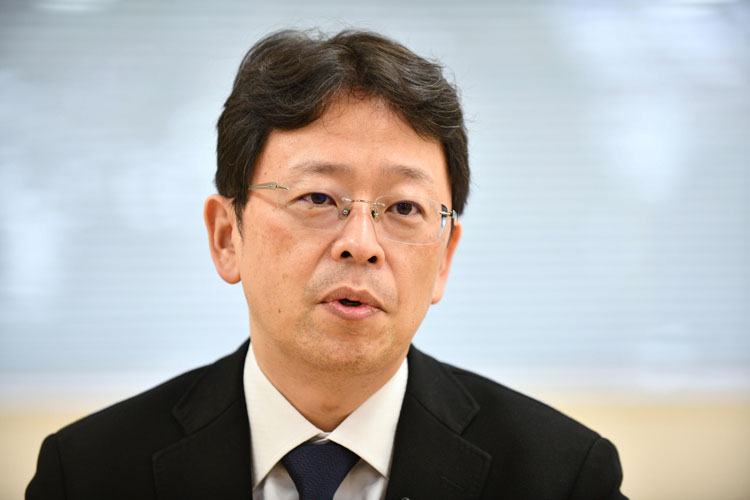 A top Japanese government adviser has admitted that the quarantine measures enacted on the Diamond Princess cruise ship in Yokohama may have allowed additional infections to spread among the ship's crew and passengers.

At least 705 people contracted the virus during the quarantine, four of whom have died. For a time, the ship had the largest concentration of cases outside of mainland China, where the outbreak began.

In an interview with CNN, government adviser Dr. Norio Ohmagari said that the quarantine of the cruise ship "may not have been perfect."

He said a "tough decision" had been made by the Japanese government to allow the cruise workers to keep working aboard the vessel, despite the risk of infection, to ensure the smooth running of the cruise ship.

But by failing to isolate the crew of the Diamond Princess from the beginning of the quarantine, he said infected workers may have passed on "secondary or tertiary" infections to their fellow crew members and passengers, thereby exacerbating the deadly outbreak. 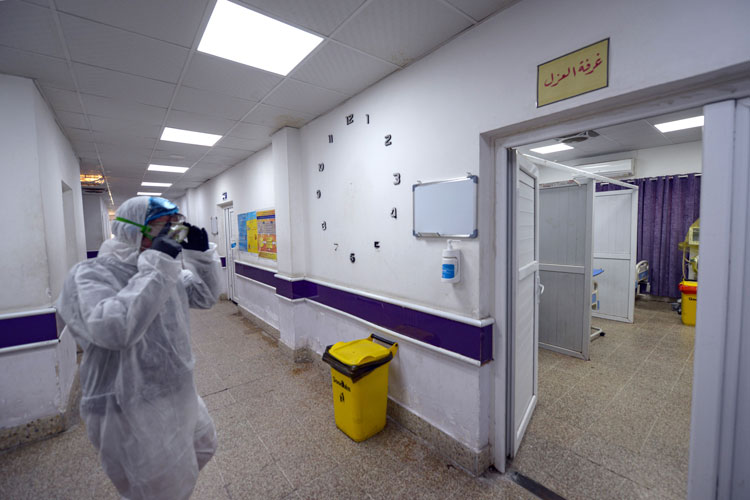 Outside the quarantine zone at the hospital in central Najaf where the first case of coronavirus documented in Iraq is being treated on February 24. Haidar Hamdani/AFP/Getty Images

A man in Iraq’s capital Baghdad tested positive for coronavirus after returning from Iran, the Iraqi health ministry said in a statement today.

It is the first case of the virus in Baghdad and brings the total number of cases in Iraq to six.

The man is currently under quarantine. He tested positive after he went to a medical facility in Baghdad.

Nearly 140 cases of the virus have been confirmed in Iran, and 19 deaths.

Several neighboring countries have cut off travel to Iran, while Qatar has ordered the evacuation of its citizens from the country, and will also help Kuwaitis to evacuate. 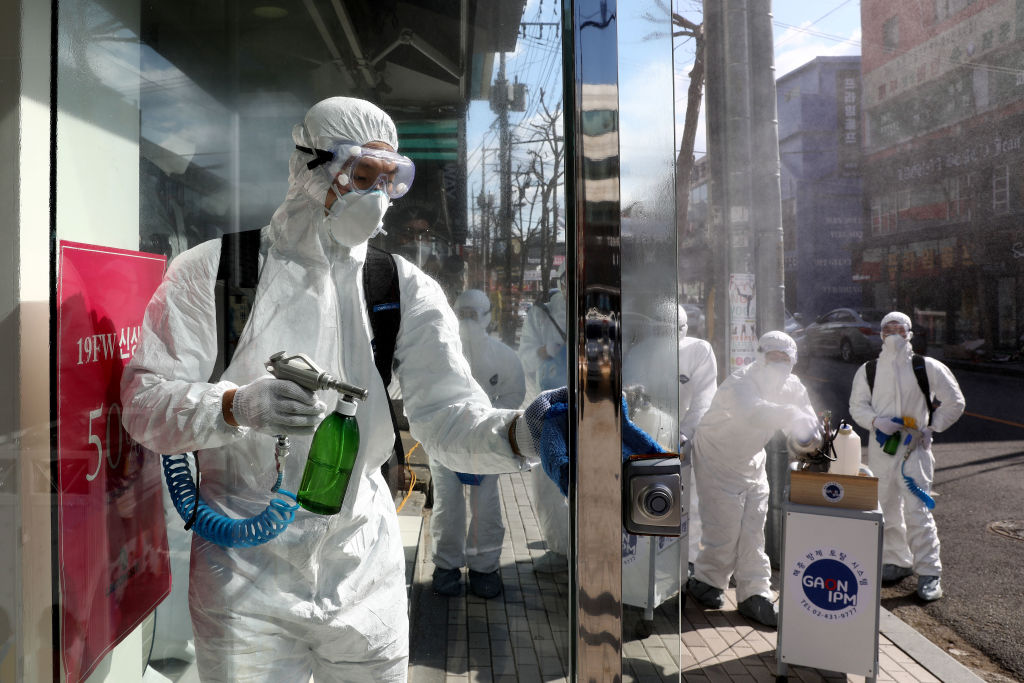 For the first time on Wednesday, the number of daily cases of the coronavirus reported outside China exceeded the number of those reported within the country where the outbreak began, according to the World Health Organization.

With countries including Denmark and Estonia reporting first confirmed cases today, the virus has now reached nearly 50 countries and territories outside mainland China, with more than 3,500 infections recorded and at least 58 deaths.

The virus has also reached every continent except Antarctica.

These are the worst-hit countries in each region of the world:

Read more about the worldwide spread of the virus here.

What Atlanta's snowmageddon teaches us about social distancing

Immunologist says he has a possible cure for the coronavirus

Paris Jackson’s Love Life: What We Know And What The Tabloids Are Definitely Getting Wrong

Defense Leaders Back Navy Secretary’s Firing of Captain Over COVID-19 Warning. His Sailors Cheered Him as He Left His Ship

A New 'The Office' Comedy For The COVID-19 Era?

Bret Baier on possible national lockdown: Trump 'is balancing out basically a nuclear bomb on the U.S. economy'

Netflix shows ‘Nailed It’ and ‘#blackAF’ worth binging in April

Henry C. Gonzalez, former South Gate mayor who survived a gunshot to the head, dies at 84

At least 70 people infected with coronavirus linked to a single church in California, health officials say

Coronavirus killed China's whistleblower doctor. Now the virus has changed how the country can mourn him

‘I Wish I Had Paid Attention Sooner.’ Kim Kardashian West on Her Justice Project and Quest For Apolitical Prison Reform

‘Everything is Always Keep Changing’

California Legislature extends recess over coronavirus concerns until May 4

Covid-19 is ravaging the music world

There Is No Way Out but Through

Answering Your Coronavirus Questions: Giving Back, Online Dating And Mexico

US Markets Close Down More Than 1% Friday

Doctors say India must prepare for an 'onslaught'

Trump, 3M clash over order to produce more face masks for US

America’s emergency stockpile is almost empty. Nobody knows what happens next.

Fanatics takes up to 65% off jerseys, hats, and more for sitewide sale

New York’s new budget is all about denial

Medicare For All Coronavirus Patients? But Who Exactly Qualifies?

How Well Do Masks Stop The Spread Of A Virus?

Tensions Persist Between Trump and Medical Advisers Over the Coronavirus

In the 1918 flu pandemic, not wearing a mask was illegal in some parts of America. What changed?

In 1918 flu pandemic, not wearing a mask was illegal in some parts of US. What changed?

The biggest bad guy at WrestleMania is coronavirus

US urges masks as dramatic steps to combat virus roll out

Suddenly, even globalists are big on borders

Married for 51 years, they died of Covid-19 six minutes apart

COVID-19 updates: Cheering sailors warm the heart but can't erase the disaster going on around us

NYC landlord cancels April rent on 80 apartments due to coronavirus

There are fears a coronavirus crisis looms in Tokyo. Is it too late to change course?