Jaguars 31, Patriots 20: Jaguars Throttle the Patriots, but It’s Not Revenge Yet

JACKSONVILLE, Fla. — Really, this was not about revenge for the Jaguars, because in no way could a Week 2 victory in dryer-vent conditions negate a season-ending defeat absorbed amid the New England winter, nor could it erase eight months of frustration, nor retroactively award them a conference title, and the Super Bowl appearance they covet still.

The Jaguars’ 31-20 thrashing on Sunday of the Patriots, who overcame a fourth-quarter deficit to topple the Jaguars in the A.F.C. Championship game last fall, served more as a rebuttal, and as a reminder that they will continue to pursue conference supremacy with all their might.

Instead of shrinking, the Jaguars, now 2-0 for the first time since 2006, compartmentalized. They did not succumb to the pressure that engulfed them in the small moments during the game they lost that they thought they would win. It was the Jaguars who made critical plays at critical times, and the Patriots — and, yes, Tom Brady — who staggered late.

With Leonard Fournette unavailable to spearhead Jacksonville’s running attack because of a hamstring injury, Blake Bortles outdueled Brady, throwing for 377 yards and four touchdowns — three in the first half and a fourth, a 61-yarder to Dede Westbrook that extended the Jaguars’ lead to 31-13, midway through the final quarter. When the Patriots forced a turnover in the fourth quarter, taking over deep in Jacksonville territory, Dante Fowler responded by strip-sacking Brady.

The sweltering conditions — 97 degrees, with a heat index of 107 — made for the hottest game in Jaguars history. According to ESPN Stats and Information, Brady had started only one previous game when it was at least 90 degrees, a 27-17 loss at Carolina in 2005.

It nevertheless took Brady a half to warm up. When he did, he directed New England to consecutive scoring drives that drew the Patriots to 24-13 early in the fourth quarter. An unlucky deflection off Austin Seferian-Jenkins’s hands nestled into the arms of Kyle Van Noy, giving New England the ball at the Jaguars’ 25.

At that moment, like so many times before, more New England magic seemed possible. Until Fowler came bounding off the edge, swatting the ball from Brady and then falling on it. That the Jaguars failed to convert that turnover into points mattered less than the fact that it prevented New England from crushing their souls once again. 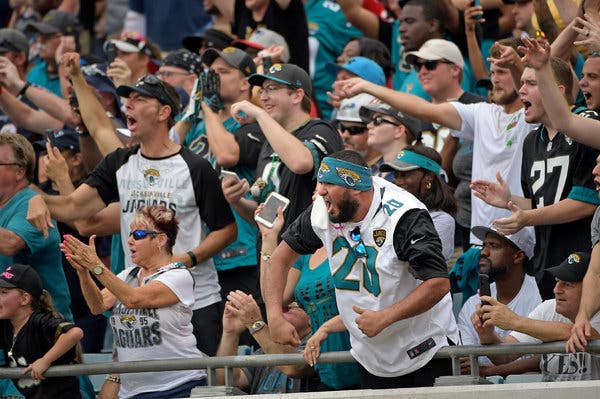 All week, the Jaguars teetered between suppressing the memory of the A.F.C. title game loss and acknowledging its effect. New season, different teams, they said. At practice, the speaker blared the Dropkick Murphys’ “I’m Shipping Up to Boston.”

“People always want to take you back,” Coach Doug Marrone said this week, “but you can’t.”

Not that anyone here was dwelling on that loss. Not the woman who Thursday night walked into TacoLu, a Jacksonville Beach restaurant, wearing a black shirt that, in teal lettering, read, “Myles Jack Wasn’t Down.” Not the two women making sandwiches at a Publix on Sunday morning. One, noticing the flood of Jaguars fans, said, “Game day.” Her colleague corrected her. “No,” she said. “Revenge day.”

So it was decreed.

Jacksonville’s riposte came in staccato bursts, one play after another in the first half. A short scoring fade to Donte Moncrief over cornerback Stephon Gilmore — whose leaping fourth-down deflection in January denied the Jaguars’ comeback. An absurd one-handed sideline catch by Keelan Cole, who reached to grab the ball as if it were an object on a high shelf, that set up his touchdown three plays later. A third-and-1 stuffing by Abry Jones that forced a New England punt. By the time Bortles connected with Seferian-Jenkins on a 4-yard touchdown nine seconds before halftime, the Jaguars led, 21-3.

Given one play, Brady knelt, and the half ended. Normally, Brady would have taken the first snap of the second half. Except that New England, after winning the coin toss, elected to receive. The Patriots always defer possession — or pardon, almost always — in an attempt to bludgeon the opponent with scores on either side of the half. Instead it was Jacksonville that consumed more than seven minutes in 15 plays, extending its advantage to 24-3 on a Josh Lambo field goal.

With a quarter and a half remaining, a 21-point lead was hardly safe. The Patriots once vanquished a 25-point third-quarter deficit in the Super Bowl — had you heard? And as Brady marched New England to one score, and then another, it was Jacksonville’s charge not to wilt.

This time, the Jaguars throttled their nemesis, whom they had never defeated in the regular season. They earned more than just a satisfying win: the head-to head tiebreaker edge, which could matter in playoff seeding and, potentially, decide home-field advantage.

A win back here in four months? That would be revenge. Jacksonville can only hope.

Ole Gunnar Solskjaer: no One wins alone, unless you're Maradona
Ocampos on Messi: you Look at him as a God, but he is real. Leo helps the players
Solskjaer on the martial-Rashford-Greenwood trio: Nothing new for Manchester United. Remember Ronaldo, Rooney and Tevez?
Josep Bartomeu: Barcelona have won La Liga 8 times in 11 years. Historic achievement
Lineker on the CAS decision on Manchester City: it's Hard to know what will happen to the FFP rules after this
Holand's busy holidays: first I sawed trees with my father, then I had a fight with a security guard at a night club
Tebas on Manchester City's participation in European competitions: CAS does not meet the arbitration standards
Source https://www.nytimes.com/2018/09/16/sports/jaguars-patriots.html?partner=rss&emc=rss

Some brand names have long perpetuated racism. Black Lives Matter is changing that.

It's harder to get a credit card: 'Issuers have really tightened up'

Clarks is offering 40 percent off on hundreds of sandals, flats and more for a limited time

Ghislaine Maxwell reportedly under investigation in US Virgin Islands

Don’t Stop at Statues. Demand a Reconsideration of Place Names Too

How Old is Andy in ‘The Old Guard’?

The latest on the coronavirus pandemic

Fire Continues To Burn Aboard The USS Bonhomme Richard

Abbreviated Pundit Roundup: Trump and Republican governors can run but they can't hide

Rise of the 5-Hour Workday: The Shift from "Hours" to "Output"

How Building a Black Hawk Relates to Running a Startup

Gingrich calls out Biden: He knows Trump has 'winning message,' so he's stealing it

I Was a Counterrorism Chief. Trump Knew What Russia Was Doing.

What Is Peacock TV And Is It Worth It?

Instagram model claims she already ‘got invited to the NBA bubble’

Flynn could reprise Trump campaign role, as he fights to clear legal cloud

3 teens shot within half an hour at the end of another violent weekend in Chicago: At least 10 killed, 50 wounded

Atalanta hosts Brescia with both teams united by tragedy

Still not sure about hitting the raw bar for your seafood fix? Here’s how to do it from home

Millennials and boomers: Pandemic pain, by the generation

Packers' Aaron Rodgers wonders whether there will be a 2020 season

Banning middle seat on planes could cut coronavirus risk on flights almost in half: MIT report

US Set for First Federal Execution in 17 Years

1-Year-Old Is Shot and Killed at Brooklyn Cookout