Jan Steward, the prolific artist, photographer and graphic designer who cowrote a book with Corita Kent, created album covers and tour programs for George Harrison and Ravi Shankar and helped nurture the South Asian music community in Los Angeles, has died. She was 91.

Steward died July 1 of complications from pneumonia at a Van Nuys hospital, her family said.

Those who knew Steward recalled how she incorporated art into seemingly everything she did. Her enduring masterpiece, they said, was her life itself: The vibrant way she lived it, whom she brought into it and how she helped others realize and cultivate their artistic talents.

“It’s hard to describe someone who has charisma — what it is — but she had it,” said Steward’s daughter-in-law, Therese Gorman-Steward. “There was just this way about her. She liked to share her love of art, and she would connect with people in that way.” 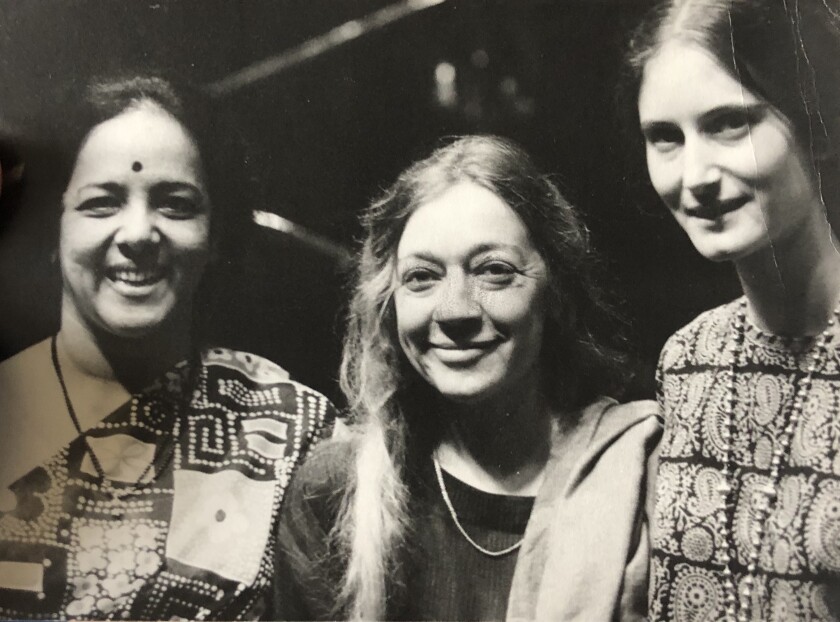 Steward’s home in the Los Feliz neighborhood of L.A. was the ultimate expression of her gifts and served as a gathering spot for artists, musicians, writers, thinkers and travelers from the late 1960s and into the 2000s. Her circle of friends included Charles and Ray Eames, Buckminster Fuller, Allen Ginsberg and Paul Horn.

“It was an amazing house — I can’t think about it too much, I miss it so much,” said Steward’s close friend Paula Rao, widow of Harihar Rao, the noted tabla and sitar player who with Shankar cofounded the Music Circle, an organization dedicated to supporting and promoting Indian classical music, for which Steward created programs and promotional materials. “It was full of beautiful stuff that she had collected, and it was full of people who liked to visit.”

Steward’s Spanish-style home, built in 1929, had thick white stucco walls and a red-tile roof. It perched on a hill at the top of a winding road, and on a clear day, visitors could see all the way to the Palos Verdes Peninsula. The bottom floor served as Steward’s studio, and the family lived on the top floor. Steward reserved a bedroom off the kitchen for guests.

“Invariably, our dinner plans for two would expand as she invited everyone who dropped by, or called or sometimes her entire weekly yoga group, to join us,” artist, curator and Steward friend Julie Ault wrote in an email. “During every visit to Jan’s home, she’d introduce me to new friends, allies and mentees. She’d meet someone on the street while walking her dog and invite them into her home, and they’d become friends or dream up a project together.”

Steward was born Janis England on Jan. 2, 1929, in Los Angeles. Her mother was a homemaker, and her father worked in sales. She was an only child who loved horses. Later, at John Marshall High School in Los Feliz, she served as the editor of the school newspaper.

She married Frank Herbert Steward in 1952. Herb, as he was called, owned an aircraft company that in the early 1960s was working on contract with the Indian government. The couple traveled to India, and Jan fell in love with the country, the culture and the music, forming lasting friendships with prominent Indian artists including painters Shanti Dave and Haku Shah and the singer Hemant Kumar. Steward visited India throughout her life, making her final trip in 2006.

Her life as an artist traces back to the late 1950s and early ’60s, when as a young mother of two, Steward began taking nighttime extension classes with Kent at Immaculate Heart College on Western Avenue. Kent was making a name for herself with her silkscreens — colorful pieces of highly stylized pop art that would soon become aligned with the 1960s counterculture revolution.

Jan Steward with her children, Sean and Tina Steward, at Immaculate Heart College in the early 1960s.

Kent became Steward’s close friend and mentor. Kent passed on a deep appreciation of the practice of art-making: the patience required, the ego-free pleasures of craft, the meticulous approach to detail.

“It was in 1979 on a trip to Little Tokyo in Los Angeles when Corita asked me to write this book,” Steward wrote in a foreword to the second edition, released in 2008. “We would work together. It would be quick and easy. It was neither. … As the years passed, Corita and I argued, laughed and hoped for enlightenment.”

Enlightenment — what it is, what it means, how to find it — is a reoccurring theme in Steward’s art, reflected in the South Asian themes, symbols and deities that appear in her designs.

She created the logo for George Harrison’s record label, Dark Horse. It features the seven-headed flying horse Uchchaihshravas from Indian art and mythology. Harrison, like Steward, was hugely influenced by the music of India. He played music on and off with Shankar from the 1970s until Harrison’s death in 2001. 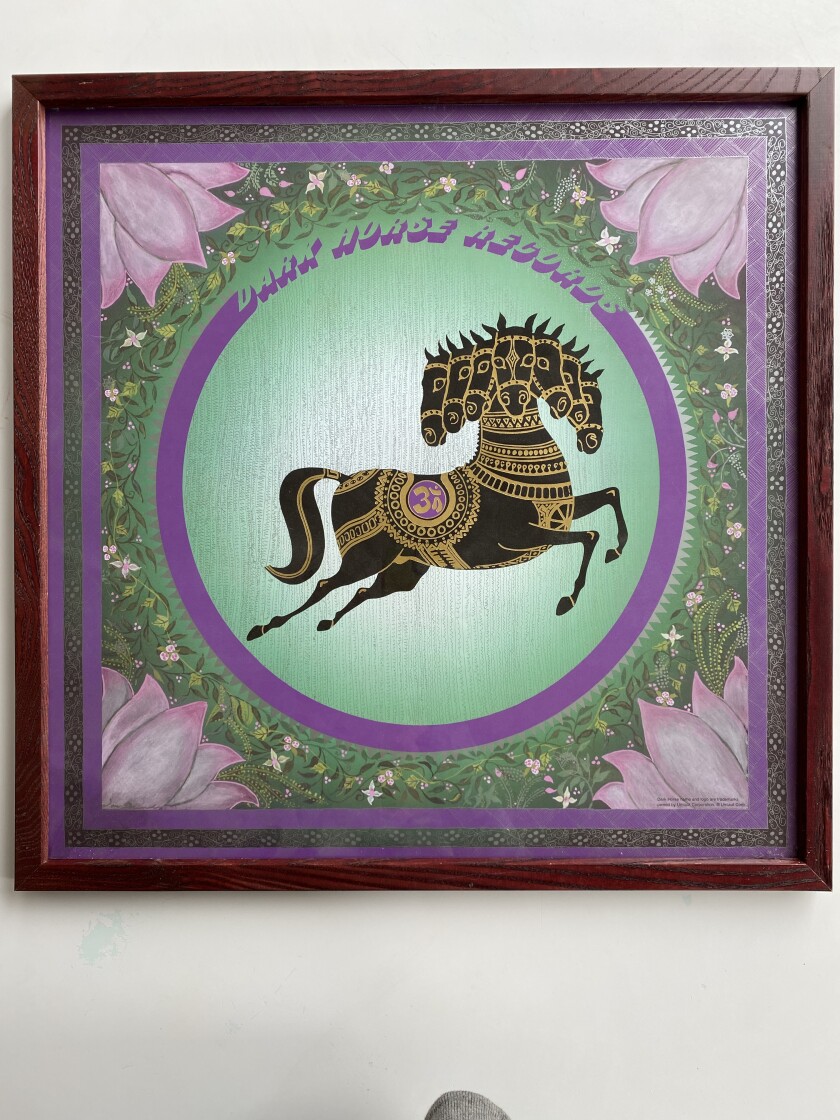 Steward also played piano and harp and was known to accompany her guests during music sessions at her home. When she was 20, she took koto lessons from the blind Japanese master musician Kimio Eto in Little Tokyo.

That was the thing about Steward, Rao said: She was involved in so much — and was so skilled in so many modes of expression — that it was hard to keep track.

Steward was not concerned with self-promotion. When she finished one thing — banners for the 1984 Olympics; a giant papier-mâché Ganesh for a dinner celebration at Occidental College; dancing puppets for the Clock of the Nations installation in the Midtown Plaza in Rochester, N.Y. — she moved on quickly to the next without fanfare.

“The only way to know what she had done was to talk to different people who worked with her,” said Rao. “When she was on a project, she would involve all kinds of people, and they were grateful for what they learned: How to find the beauty in the most ordinary places.”

Steward is survived by her children, Sean and Tina Steward, and grandchildren Morgan, Geneva and Lottie.

She will be honored in a private Zoom funeral and traditional 49th Day memorial service Sunday originating from Senshin Buddhist Temple in Los Angeles, followed by a short performance by Paul Livingstone on sitar, Alma Cielo on tanpura and Peter Jacobson on cello.

Josep Bartomeu: No one is planning to resign. We are focused on the work of Barca
Patrice evra: Manchester United's Deals have impressed social media more than they have affected the reality
Bellingham, 17, is the youngest assist writer in the Bundesliga. He gave a pass to the same age as Reina
Bielsa Pro 4:3 with Fulham: It was difficult for Leeds to impose their style of play on their opponents
Bale is a tactical rebus for Mourinho. His move to Tottenham is more necessary for Levi, not Jose
Josep Bartomeu: Messi is the best in history. I couldn't let him leave Barca
Bale moved to Tottenham from Real Madrid on loan
Source https://www.latimes.com/entertainment-arts/story/2020-08-10/jan-steward-artist-dies-corita-kent-ravi-shankar-george-harrison

Trump: GOP has "obligation" to fill SCOTUS seat "without delay"

Education Secretary DeVos warns about wave of private school closings: 'That's a crisis in the making'

What McConnell has said on SCOTUS vacancies in an election year

The 6 Republican senators who will decide the Supreme Court fight

Novak Djokovic blows up again during match: ‘I’m not perfect’

What Time Will ‘Power Book II: Ghost’ Episode 3 Be on Starz?

Why Spotify is picking a fight with Apple over Apple One

Cash Is Flowing Over Confirmation Battle for Supreme Court Vacancy

New York to honor Ginsburg with a statue in Brooklyn, her birthplace

Megan Rapinoe on Ruth Bader Ginsburg's death: 'There is only one way to honor this incredible woman. Fight.'

Election-year Supreme Court blockbusters: A look back at history

TikTok and WeChat downloads soar ahead of Sunday's ban

Alex Rodriguez on Ruth Bader Ginsburg's death: 'You will be deeply missed by all'

Tom Brady pays respects to Ruth Bader Ginsburg: 'We should all aspire to live our lives as principled as RBG'

Bale back at Tottenham, Reguilón also joins from Real Madrid

Underwater and on fire: US climate change magnifies extremes

Meghan Markle On Ruth Bader Ginsburg's Death: 'Honor Her, Remember her, Act for Her'

Kamala Harris And Her Husband Make Stop Outside The Supreme Court

McConnell vows to move forward with replacing Ginsburg, but does he have the votes?

‘The Boys’ Season 2: Buffy and Spike Walked So Homelander and Stormfront Could Run… Sex-wise

'Use My Words Against Me': Lindsey Graham's Shifting Position On Court Vacancies

Romanian families protest mandatory use of masks in school

The Latest: Hard day on the cards for US Open at Winged Foot

Moreno helps to give Emery 1st win at Villarreal

What's On The Docket Next For The Supreme Court?

From Trump, No Respect for Ruth Bader Ginsburg, or the Rules

Ruth Bader Ginsburg to be honored with statue in Brooklyn, her birthplace: Cuomo