Tokyo — Officials in Okinawa said Monday that 95 U.S. service members at bases on the Japanese island have tested positive for the new coronavirus, raising long-standing tension between the local population and the American military. It's the biggest number of cases the U.S. military has seen in Asia since the COVID-19 pandemic started, and officials say U.S. virus containment policy isn't helping.

More than half of the roughly 50,000 U.S. troops in Japan are based in Okinawa. Three U.S. bases in Okinawa have confirmed infections: U.S. Marine Corps Air Station Futenma, Camp Hansen and Camp Kinser.

Local reports say Fourth of July parties held both on and off the bases — attended by hundreds if not thousands of personnel and employees - are at the root of the new outbreak. 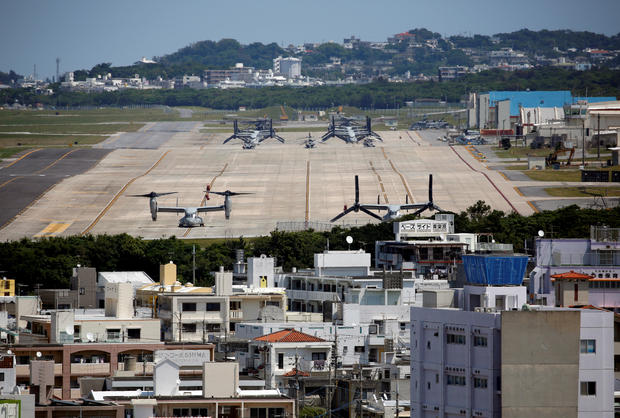 A lockdown is now in effect and efforts are underway to track down people who joined the celebrations for testing, and to trace any Japanese citizens who were in close contact with those people and may also be infected.

Okinawa Governor Denny Tamaki expressed anger over the weekend, saying he was "shocked" by the size of the outbreak and had "concern that a second wave has hit."

He also cast doubt on whether the U.S. was doing enough to stop the spread of the deadly disease on the island.

"I can't help but feel serious doubts about U.S. measures against infections," he told reporters.

Personnel movements have been restricted and service members and their families aren't allowed to eat in restaurants in town or patronize non-essential businesses.

Governor Tamaki, the son of an American father and Okinawan mother, has also demanded the U.S. military increase disease prevention measures to maximum levels, stop sending personnel from the U.S. mainland to Okinawa, and be more transparent with local officials about what measures are being taken.

This surge in coronavirus cases in Okinawa is only making tension worse between the U.S. military and the people of the island — a history marred by previous assault, rape and murder cases that have fuelled anti-U.S. sentiment on the island.

Beyond Japan, U-S Forces Korea confirmed Monday that there were 11 new cases among American personnel based in South Korea — all of them imported from the United States.

Ex-Director of Valencia on the transfer of Ronaldo: in 2006, the club agreed with his agent and sponsors, but the deal did not take place
Klopp, Lampard, Rodgers and Wilder claim the award for the best coach of the Premier League, Pep-no
The authors of Showsport choose the winner of the Champions League: Chernyavsky - for Leipzig, Muiznek believes in real 🤪
Trent, rashford, martial and Greenwood are up for the award for the best young player of the season
Ronaldo started the 2016-17 season poorly – and then scored 10 goals in the Champions League play-offs and produced the best performance in the history of the tournament
Henderson, de Bruyne, Pope and Ings is among the contenders for the award for the best player of the Premier League season
The Bundesliga plans to start the season on September 18 with a match between Bayern – Schalke or two Borussia
Source https://www.cbsnews.com/news/okinawa-coronavirus-cases-us-military-bases-japan-locked-down-covid-outbreak-july-4-parties/

‘The Rain’ Recap: What to Remember Before Season 3

Giants mailbag: Patrick Graham will have to get creative with defense

California Doesn't Have Covid-19 Travel Restrictions. But Here's How to Protect Yourself

Facebook Will Let Employees Work From Home Through July 2021

Melissa Etheridge talks grief and healing after son Beckett's death: 'Is it my fault?'

US Adds 1.8 Million Jobs in Sign Hiring Has Slowed

US adds 1.8 million jobs in a sign that hiring has slowed

Milwaukee police chief demoted after questions over use of tear gas, pepper spray at protests

‘Shameful’: Biden slams Trump for saying he would ‘hurt God’ if elected

HBO’s ‘Lovecraft Country’ is a Thrilling Ode to Pulp Fiction

Biden Fires Back at Trump’s Remarks About His Religious Views

Chicago police exchange gunfire with suspect on South Side, no one injured

How 'The Matrix' is a trans story, according to Netflix and co-director

Seth Rogen Almost Smoked Weed With Himself in ‘An American Pickle’

US Space Force to sponsor Ed Carpenter Racing at Indy 500

How cities can tackle violent crime without relying on police

German Cinema Org Weighs In On ‘Mulan’ Controversy: “[Disney Is] Playing With Fire”

Judge dismisses lawsuit to invalidate proxy voting in the House

UFOs moving in formation spotted in Las Vegas, expert says they were not drones

Column: Facing a wave of evictions, California is about to make thousands of kids homeless

Scammers could be targeting unemployment benefits in California, state warns

Eviction protections are expiring. What does this mean for struggling California tenants?

California's agency for protecting workers can't protect its own — even amid a pandemic, officials say

Our Guide to Essential Oils for Busy Moms

Column: Trump says he has a healthcare plan (yeah, sure). I have a better idea

Children with disabilities are regressing. How much is distance learning to blame?

After first being spared, rural California now being ravaged by the coronavirus

How to Accelerate Equity, From the Founder of a Leadership-Training Group (Podcast)

Pandemic Parenting: How Do I Adjust for Virtual Learning?

70 Whole30 Recipes That Don't Taste Like You're Depriving Yourself

'Dirty Dancing' is getting a sequel

Bush to publish book with his paintings of 43 immigrants