Think you’re busy? Josh Gad has amassed more than 70 film and TV credits since 2007 and has four projects out now: the film adaptation “Artemis Fowl,” the HBO series “Avenue 5,” the animated “Central Park” and his YouTube series “Reunited Apart.”

“I began quarantine from the very frustrating position of feeling useless. I’m not a doctor; I’m not a first responder. I’m clearly nonessential. But I could entertain.” 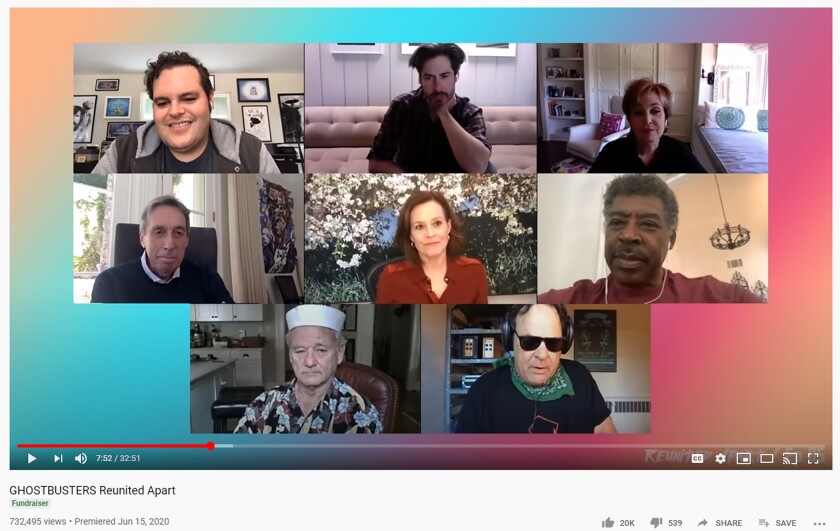 ‘Reunited’ and it feels so good

“What’s been giving me joy over these 100 days or so is revisiting my favorite movies and introducing them to my kids. I thought, I get so much joy out of these Zooms where I reunite with people I haven’t spoken to in a while; what if there was a way to utilize that model to reunite creative teams from some of our favorite films?”

Thus was born “Reunited Apart,” a YouTube series of fundraising video chats with the makers of some of Gad’s favorite movies. The loose, chummy episodes have featured “Ghostbusters,” “Back to the Future,” “The Goonies” and others. A massive “Lord of the Rings” installment has more than 4.8 million views. The series has raised more than $200,000 for causes including Project Hope, Dig Deep and the Equal Justice Initiative, with corporate partners such as Cheerios and Barefoot Wine also kicking in large contributions.

“I thought this would be a great way to give people some joy in the most joyless period I’ve lived through,” Gad says with a rueful chuckle, “and to raise money for amazing causes, too many to mention, but like No Kid Hungry, which we’ve raised $150,000 for off our ‘Lord of the Rings’ episode.” He can do what he wants on the fifth “Avenue”: Played by Josh Gad, “Avenue 5" zillionaire Herman Judd’s eccentric look was influenced by Richard Branson, “Back to the Future 2,” Donald Trump Jr. and the Fyre Festival’s Billy McFarland.

How to be a zillionaire

“What’s so funny is [Inannucci] seems to be the Nostradamus of our time,” says Gad. “It started as a satire and in the year since we shot it, has turned into a documentary. I can’t tell you how many people have reached out about the airlock episode.”

Without spoilers, that episode depicts the sometimes suicidal determination of some people to disbelieve facts when in crisis.

“I was really fascinated by Elizabeth Holmes. I was listening to the podcast about her, ‘The Dropout.’ She was selling this ‘miracle’ blood test that would solve everything and the way she convinced people was by dressing the part. She had the same mock turtlenecks as Steve Jobs tailored to herself so she could convince people she was the heir apparent to Jobs.

“So Herman Judd would literally dress the part of Richard Branson, have his hair, would look up to people like Elon Musk. He would try to be all of those people without actually having the skill set to be any of those people. What he’s selling is a shell. It starts with him writing on a yellow sticky pad, ‘Space Travel’ with a question mark. That’s what inspires this grand vision, but it’s all a shell because he doesn’t have the skill set to execute it. So it’s all about the packaging.”

Singing in the park

All these projects boast galaxies of talent, perhaps none more dense than the animated musical Gad cocreated with Loren Bouchard and Nora Smith (of “Bob’s Burgers”) for Apple TV+: “Central Park.”

“I keep saying this jokingly but not jokingly — it’s the ‘Avengers’ of musical theater,” Gad says. “I’m always really hard on musical projects that don’t cast people who can sing. I couldn’t create a musical and Auto-Tune my entire cast. So I called my college classmate, Leslie Odom Jr. — we went to Carnegie-Mellon Drama together: ‘Sorry it took you winning a Tony for me to call and offer you a job that doesn’t pay very much.’”

“The thing that is so gratifying to me is, we set out two years ago to create a love letter to New York City, to rising up in the face of adversity and seizing the moment. I didn’t realize how important that message and that joyful delivery would be right now,” Gad said. The room where it happens: Josh Gad multitasks in his YouTube studio setup.

In for a landing


To these, add “Artemis Fowl,” the Disney+ film adapted from the popular children’s books, which Gad was not familiar with. “I just took a leap of faith on it because [director] Ken Branagh is such a genius: ‘Do you want to make this Irish fairy tale movie with me — alongside Judi Dench?’ It’s kind of an easy yes.”

And there may be evidence that Gad’s labors are landing.

“I did a social-distancing get-together with my girls and a pocket of their friends, and the kids, out of nowhere, all started singing ‘Own It’ [from ‘Central Park’]. And I started to tear up a little bit, as anyone who knows me would say is often the case. I’d done things like ‘Frozen’ but I’d never created something that has had that sort of influence. The world is a nonstop cycle of awful, awful, awfulness. Seeing that was pretty moving.”

West ham midfielder Antonio is the best player in the Premier League in July. He scored 8 goals in 7 matches
Brih is scheduled for the Manchester City – Real Madrid match. Zweier will judge the Juventus-Lyon game
Fulham returned to the Premier League, earned 135 million pounds and destroyed the fairytale of Brentford. Everything was decided by the trick of the defender and a stupid mistake of the goalkeeper
Fabinho: this Liverpool will be remembered forever. The title in the Premier League is special, because we had to wait so long
Tuchel asked PSG to buy Alaba from Bayern. The player wanted to receive 20+ million euros a year
Messi-Casillas: you are an incredible goalkeeper. It was a beautiful rivalry that made you overcome yourself
Ferran Torres: Ronaldo was the best. He is an example for everyone who wants to achieve the maximum in football
Source https://www.latimes.com/entertainment-arts/tv/story/2020-07-02/josh-gad-avenue-5-central-park-artemis-fowl-reunited-apart

Zooey Deschanel, Jonathan Scott celebrate 1 year of knowing one another: 'How time flies'

Poll: Voters much more likely to trust family, Fauci than Trump on vaccine

Kids less likely to die from coronavirus, but schools could become hot spots for spread

‘We have to get rid of Trump’: Pro-Bernie group launches effort to boost Biden

Column: Trump’s right, schools must reopen. We just need kids to promise they won’t get the coronavirus.

Column: Hate that mask? You’ll like it better if you turn it into a story.

How Influencers Are Using Acne to Sell Things

Welcome to These 23 Surprising Facts About The O.C., B--ch!

Fact Check: No, it wasn't MOAB or nuclear blast in Beirut

NFL's Top Doctor On How Football Plans To Return

One pilot brings the world to Iceland

Why N.Y.C. Has a New Health Commissioner

HSBC bet the bank on China. It's in big trouble if tensions escalate

Weed is not good for your heart, studies say

Biden announces largest ad buy ever by a presidential candidate

Business and Racial Inequality: A Discussion

Wayne: Worthy pulls ahead of Burton-Harris

Another cruise ship in Norway stalled amid infection fears

Anderson Cooper: ‘Have You Ever Heard Someone Whine As Much’ As Donald Trump?

Coronavirus updates: US daily case count shoots back up over 50,000

Militants attack in Indian Kashmir as it locks down for anniversary

5 Minutes That Will Make You Love 21st-Century Composers

Tennessee Republicans, Once Moderate and Genteel, Turn Toxic in the Trump Era

See for Yourself: How Airplanes Are Cleaned Today

Donna Brazile: Biden would benefit by picking a Black woman for VP — and so would America

Wanted: Young People To Work The Polls This November

Americans Back Trump On Immigration — But Only To Stop COVID-19, Poll Finds

If Public Schools Are Closed, Should Private Schools Have to Follow?

Trump and the Republicans Are Risking an All-Out Depression

So You Want to Volunteer in a Coronavirus Vaccine Trial

Business Interrupted by the Pandemic? Your Insurance Is No Good

Will Bill Barr Try to Help Trump Win the Election?

COVID-19 may have lasting effects on some children's brains

We Need to Talk About ‘Indian Matchmaking’

A Teacher Weighs Her Options

15 Takes on the Semi Future