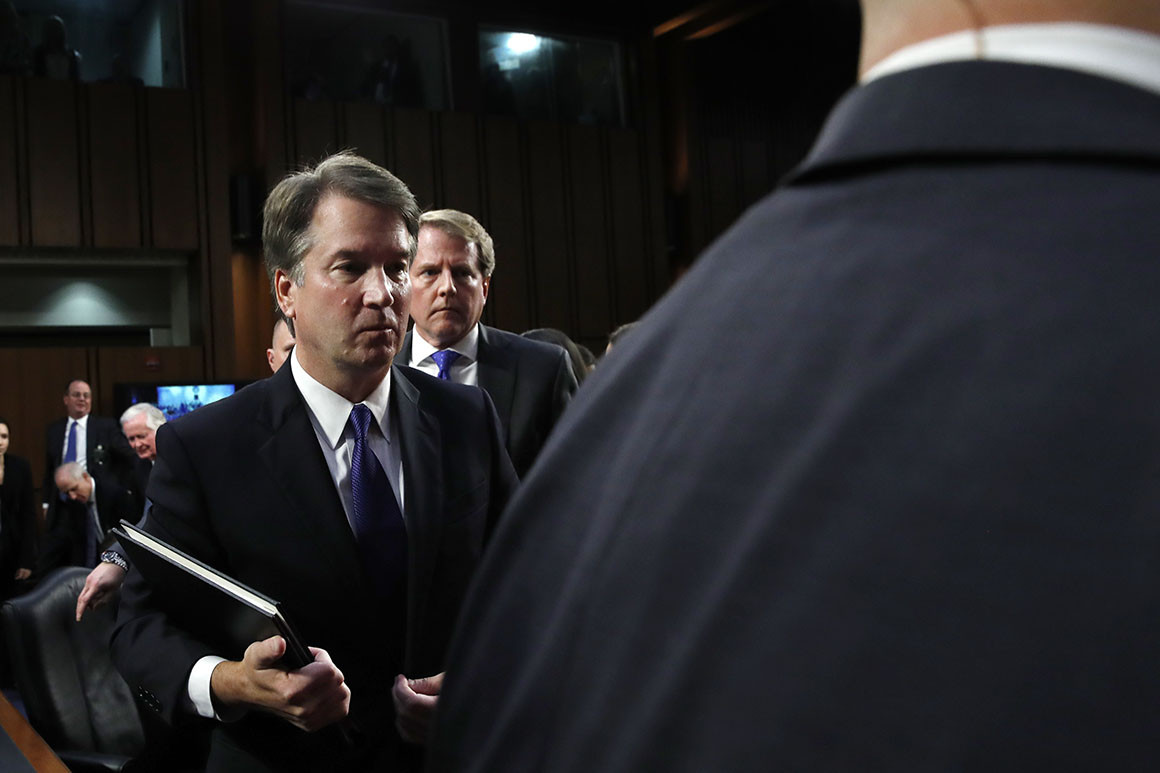 Brett Kavanaugh and the Trump White House had prepared for a moment like this.

In his opening statement before the Senate Judiciary Committee, the Supreme Court nominee praised his mother as a trailblazing prosecutor. He said he's grateful for Title IX, the law intended to give women and girls equal access to sports programs that receive federal funds. And he drew attention to the fact that a majority of his law clerks have been women.

Long before Sen. Dianne Feinstein (D-Calif.) referred a letter allegedly detailing a high school sexual assault to the FBI last week, and long before the accuser came forward Sunday just days before a Senate committee vote on the nomination, Kavanaugh and his allies had been working to inoculate him against charges that he might be hostile to women.

Republican veterans of Supreme Court confirmations say Anita Hill’s allegations against Clarence Thomas during his 1991 nomination battle and decades of attacks since then, supercharged by the #MeToo movement over the past year, helped prepare nominees for the charges they might face. Hill, like Kavanaugh’s accuser, had insisted on anonymity when she approached the Judiciary Committee in September 1991, but came forward publicly two days before the Senate was scheduled to vote on his confirmation.

And since Hill’s allegations rocked Thomas’s nomination, Republicans have braced not just for last-minute attacks but, more broadly, for any suggestion they’re anything less than enthusiastic champions of women’s rights.

Chuck Cooper, a top Washington attorney who played a central role in the confirmation battles of William Rehnquist and Antonin Scalia, likened the Hill allegations to the spate of news reports during the 1990s about high-profile nominees who employed illegal immigrants without paying taxes on them: All future nominees knew that would become an issue in their own nomination.

“Since that moment, everybody with ambitions to public office started paying taxes on their nannies,” said Cooper, who called the 11th-hour charges against Kavanaugh “the confirmation equivalent of a drive-by shooting.”

If confirmed, Kavanaugh is the potential swing vote on Roe v. Wade, so it was more obvious for him than for other nominees that women’s issues would dominate his confirmation hearings. “The fact is that nobody listened to any of that stuff from the announcement and said, ‘Hmm, it’s weird, why are you doing that?’ Everybody understood the political point of it,” said Ramesh Ponnuru, a senior editor at National Review and a visiting fellow at the American Enterprise Institute.

But the judge was also girding for a last-minute attack. A person close to the Kavanaugh team said before Sunday’s news that it had “almost become a running joke” among the team: “What allegation is gonna come up after the confirmation hearing?”

The White House on Sunday stood behind Kavanaugh’s earlier statement that he “categorically and unequivocally” denied the assault allegation.

“Given Senator Schumer’s statement the night the nomination was announced, which was that ‘I will oppose Kavanaugh with everything I’ve got,’ it’s not surprising that the Democrats would attempt an 11th hour delay tactic,” a White House official told POLITICO. “But it is disturbing that this is the way they’re going about it.”

The latest accusation could shape far more than the Supreme Court nomination. The pivotal midterm election, just seven weeks away, has already been swayed heavily by the #MeToo movement and longstanding accusations against the president. How top GOP lawmakers field the allegations against Kavanaugh could further energize the Democratic base — much like lawmakers’ treatment of Hill spurred a wave of women to seek office in 1992.

The Senate Judiciary Committee on Sunday stuck by Kavanaugh just after the name of the accuser first emerged. A Republican aide to the White House during a recent Supreme Court nomination expected an immediate mobilization of the president himself and close consultation with key senators.

“It’s likely Trump will weigh in immediately to try to redefine the terms of the debate. It’s likely he will weigh in and accuse her of distorting the facts and attack the Democrats,” this person said. The president has a record of doing just that, and not only against a spate of women who have accused him of sexual harassment. He also went after the women who came forward earlier this year to accuse Alabama Senate candidate Roy Moore of sexual predation.

The aide emphasized the importance of communication between the White House and a handful of senators who could sway the nomination. “If I were Susan Collins or Lisa Murkowski, I would want to talk to him again and they very well might. He has to make himself available to senators that want to see him again. It just shows transparency.“

"The White House, outside groups, and key Republican allies must stand by his denials,” the former aide said. “And while she has some details down, she doesn’t have all the details wrapped up."

Democrats’ arguments that GOP lawmakers and conservative jurists are hostile to women has become a predictable one. There was the “war on women” of 2012 that helped Barack Obama recapture the White House. The former president got an assist from tea party candidates like Todd Akin of Missouri and Richard Mourdock of Indiana who suggested pregnancy that resulting from rape was, in Mourdock’s words, “something God intended.”

But Democrats were less successful two years later when the GOP knew what to expect. The party was trounced running on what political pundits dubbed the “War on Women 2.0.” Incumbent Sen. Mark Udall (D-Colo.) earned the nickname “Mark Uterus” for his perceived obsession with women’s issues, with a reporter joking that, if a video were to be made of his campaign, it would be set in a gynecologist's office.

With the partisan gender gap among voters at a 15-year-high, according to the Pew Research Center, and the added energy of the #MeToo movement, the need to fend off these attacks — whether warranted or not –- has become increasingly clear to Republican candidates and judicial nominees.

“Put these things together and it’s just obvious that particularly if you’ve got a male nominee to the Supreme Court, you’re gonna have to defend yourself on that flank,” Ponnuru said.

As the potential replacement for outgoing Justice Anthony Kennedy and the potential swing vote on Roe v. Wade, two female Republican senators, Collins of Maine and Murkowski of Alaska, had already said they wanted reassurances Kavanaugh wasn't set on overturning the 1973 decision that made access to abortion a constitutional right, putting women's issues at the center of his confirmation battle from the outset.

From the moment Trump announced his nomination in early July, conservatives have worked to portray the judge as an advocate for women. The Judicial Crisis Network, an organization devoted to helping confirm originalist judges, spent millions of dollars on ads featuring former Kavanaugh clerks like Kathryn Cherry: "As a woman and a minority I'm confident that Judge Kavanaugh will be a great justice," she said.

Within 24 hours of the moment that Feinstein unveiled the anonymous accusation last Thursday, former clerks and old friends had managed to round up 65 women who said they had known him since high school and signed a letter attesting that “he has always treated women with decency and respect.”

“That was true in high school, and it has remained true to this day,” they wrote.

After Kavanaugh’s accuser went public on Sunday, their words fell flat with activists aligned with the Democratic party. Kavanaugh, said NARAL president Ilyse Hogue, "has shown throughout his professional tenure and these hearings a lack of respect for women and our bodily autonomy. The stakes are too high to allow this nomination to move forward.”

Кад Cadiz returned to La Liga after 14 years
Pioli about 2:2 with Napoli: One point is a good result
Gattuso on Milan's penalty: the Rule needs to change. Jumping with your hands behind your back is another sport
Milan will offer 25 million euros for Celtic defender Ayer
Klopp on plans: Four years at Liverpool. After that, I want to do nothing for a year
Rogers Pro 1:4 with Bournemouth: Leicester play well only 45 minutes after the break
Inter and Roma are Interested in Garay
Source https://www.politico.com/story/2018/09/16/supreme-court-kavanaugh-nomination-women-metoo-826062

TikTok vs. Facebook: Could the U.S. Really Ban TikTok?

US Turns Screws on Maritime Industry to Cut Off Venezuela's Oil

US Federal Executions on Brink of Resuming After 17 Years

China reports 141 dead or missing in flooding since June

Undaunted, US global media chief plows ahead with changes

Feds to execute 1st inmate in 17 years for Arkansas murders

‘sMothered’ recap: Mom gets plastic surgery with daughter to bond

The Rise of Right Wing Feminism in France

600,000 vote in Hong Kong despite fears of new security law

Asian shares gain on hopes for recovery, despite outbreaks,

21 injured in fire aboard ship at Naval Base San Diego

How Nets are dealing with nearly unrecognizable roster

NHL restart will be wild ride of uncertainty

Maine speaker drowns out rivals in bid to take on Collins

21 injured after explosion and fire on San Diego naval ship

‘Turn yourselves in’: Davon McNeal’s grandfather pleads with shooting suspects

New Zealand mosque gunman to represent himself at sentencing