L.A. mystery: the mourning doves stopped singing. What happened to them?

The coo was like the voice of my L.A. childhood.

Hearing the mourning dove again was a revelation, but with it came a realization: I’d not listened to one in many years.

It is the sound of do-nothing summer afternoons in the pre-internet portion of my youth. Those were untold hours spent draped across the blue couch in my parents’ bedroom, immobilized by the un-airconditioned upstairs air.

I’d look out across Spanish tile and into the trees, searching in vain for the bird. What felt like boredom at the time was really an indulgence.

﻿So many of the headlines about the effects of climate change center on the more of it all. More blistering heat. More invasive mosquitos. More devastating floods.

But I have become preoccupied by the apparent absence of the mourning dove. This sort of lamentation is far from novel in a post-"Silent Spring” world. But DDT was banned nationwide 10 years before I was born. The mourning dove’s call is my loss. And it is one that unlocks in me an incandescent anger over what we’ve done to the planet, the sort that curdles into a despair that can feel bottomless.

It is an eerie loss too, made all the more unsettling because it is not exactly provable. There are no reliable data on Los Angeles’ mourning dove population.

And mourning doves are far from endangered: They are one of the most abundant bird species in North America and found across the U.S. year-round. There are tens of millions of mourning doves, also called turtle doves, in the U.S., and it is legal to hunt them in most states, including California.

“In any given local area, mourning doves might be less common and heard than they were 10 or 20 or 50 years ago,” said Kimball Garrett, ornithology collections manager of the Natural History Museum of Los Angeles County.

I had called Garrett to ask about the local mourning dove population. I told him that earlier during the pandemic, while walking in my Central L.A. neighborhood, I had been delighted to hear the wistful call — a song used by males to attract females. But it happened only once, and not again.

Turns out, I am not alone in noticing an absence.

“I have heard people say that they’ve seen and heard fewer,” Garrett said.

I got the sense that Garrett is accustomed to validating the worries of addled callers nursing one avian anxiety or another. But there also was more than just reassurance in his voice.

“I am not discounting at all your observation that you don’t hear them as often as you used to,” he said. “I am sure that is happening.”

Plenty of bird species are doing just fine in L.A. — and some far worse than the mourning dove. Maybe I should have picked another to mourn. Consider the ivory-billed woodpecker, which the U.S. government declared extinct Sept. 27. Despite many searches mounted over the years, the woodpecker hadn’t been seen in decades.

But Garrett didn’t think my grief was misplaced.

“There’s no reason you shouldn’t lament the … fact that you don’t hear [mourning doves] because it is such an evocative song,” he said. “The fact that abundant birds decline in a certain area so that you can’t hear them is pretty important.” 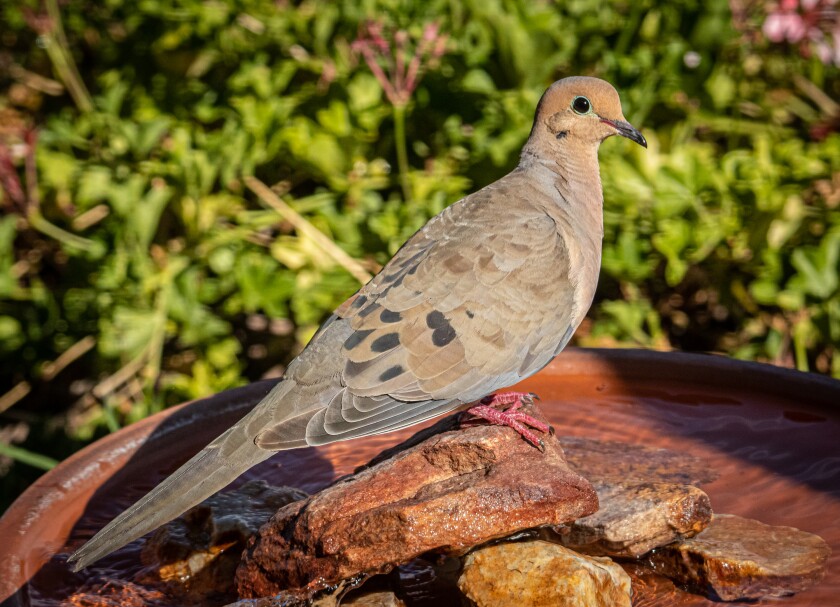 Mourning dove populations are declining in many states, including California.

Garrett told me about an Angeleno who contacts him every year or so to inquire about the local population of spotted doves, a species native to South Asia that was introduced to L.A. around 1915. Unlike the mourning dove, it has long shown clear signs of decline here. And when they speak, Garrett confirms what the caller undoubtedly already knows: There are fewer spotted doves than before.

The caller’s name is William Jordan, and he’s the author of books including 1991’s “Divorce Among the Gulls,” a collection of essays about the natural world. Jordan, 76, has lived in Culver City for 30 years. There was a time when spotted doves were common there. He would wake up in the morning to their sonorous calls. “It was a lovely sound,” he said.

But about 15 years ago, Jordan began to hear it less.

“I haven’t seen one in ages,” he said. “When a species like that leaves, you feel so empty.”

Jordan worries about what he calls the “innate rapacious greed” of man.

“To me,” he said, “civilization is just a stucco tsunami that is covering everything — and things disappear.”

Among the things that are gone: the street trees that sheltered the mourning doves of my youth. The Arizona ashes, mighty and deciduous, with craggy bark and saw-tooth-edged leaves, were removed by the city of Beverly Hills following the adoption of the 1996 Focused Street Tree Master Plan. City staff noted that the ashes, then about 70 years old, suffered “severe health-related problems” tied to “the use of chemical injections over many years for the control of insects.”

Such a classic story of human intervention: The chemicals were meant to help. Instead, trees were felled. Twenty five years later, all sorts of damage is evident.

But over in Culver City, Jordan is lucky: He’s heard mourning doves, as recently as a month or so ago. He enjoys their song, which he said “doesn’t have any sharp edges to it.”

“It’s one of the great sounds of nature — of urban ecology,” he said.

I agree. And I worry that my children will never hear the mourning dove. It will not be a part of their lazy summers, already rendered less so by modern life.

There is little time to stare out the window and into the trees, searching for something unseen.

We’re going back to the office, so what’s the greeting etiquette?

Govt calls all party meet ahead of Winter session; AAP walks out [details]

Book excerpt: "The Island of Missing Trees" by Elif Shafak

Once rare, lung transplants for COVID-19 patients are rising quickly

Can former Scientologists take the church to court? Or are religious tribunals the only recourse?

For this restaurant owner, L.A.'s vaccine mandate means bracing herself to tell customers 'no'

Crime on trains and buses rises as pandemic eases

The massive messaging miscues of all the president's men (and women)

Jets vs. Texans odds, analysis and predictions for all Week 12 Sunday NFL games

Help! My Best Friend’s Son is Aggressively Stalking My Daughter.

Abortion access already out of reach for most Mississippians

'Car guy' Biden puts his spin on the presidency

Want to work in IT? Look for a paid apprenticeship

The Missouri auctioneer bidding it all for Trump's backing

Trump’s Senate picks stumble out of the gate

Column: Biden wants to focus on China. Putin has another idea

Dear Care and Feeding: My Daughter Was Invited to Eavesdrop on Her Friend’s Therapy Session

No one seems to like the Lincoln Project anymore

Colgate goes up against Niagara

ACU goes up against Schreiner

Cornell squares up against Canisius

TCU squares off against Austin Peay

Get this drink-elevating can opener, on sale now for Black Friday

Lindsay Lohan announces she is engaged to Bader Shammas

With Build Back Better, Dems aim to correct messaging missteps

Omicron: Why Did WHO Skip Over Two Letters in Greek Alphabet to Name Latest Variant?

The Omicron Covid-19 variant is raising concerns amid the holiday travel season, but there's no need to panic just yet, experts say

BTS Lights Up L.A.’s SoFi Stadium on Night One of Permission to Dance Tour

How Norilsk, in the Russian Arctic, became one of the most polluted places on Earth

Jets vs. Texans: Preview, predictions, what to watch for

Camped in Calais, migrants renew resolve to try for England

Republicans target Biden, Democrats over inflation. What would they do about it?

Am I Responsible for Paying Off My Deceased Husband’s Debt?

Political cartoon of the day: No more mean tweets