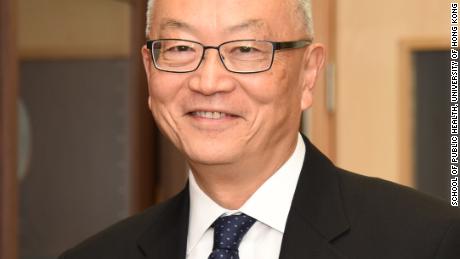 Since Shanghai was the country's economic center, the stakes for China -- and the world -- were high. The Chinese government asked the World Health Organization (WHO) to conduct an independent assessment of the situation, and I joined colleagues from Germany, the US and the WHO Office in Beijing to form the WHO team that went to Shanghai.
In confidence, we spoke with international diplomats in Shanghai, made unannounced visits to health care facilities so we could directly examine medical records and speak with staff, and met with city officials. We found no evidence of hidden SARS cases -- a finding that provided both the international community and China with critical assurance.

Only the WHO could have conducted this kind of investigation. I know because, since the 1990s, I have led responses to numerous infectious disease outbreaks, initially at the US Centers for Disease Control and Prevention (CDC) and later at the WHO, where I became the Director-General's Special Advisor for Pandemic Influenza and then Assistant Director-General for Health Security and Environment. I have worked with many countries -- large and small -- as well as frontline health workers, agricultural and veterinary professionals, civilian and military public health scientists, diplomats, ministers and presidents to try and find useful, practical and sustainable ways to strengthen the health security of all countries.

Based on these experiences, I can state with certainty that the Trump administration's notification to Congress and the United Nations that the US will formally withdraw its membership from the WHO fundamentally threatens the safety of the United States and other countries. It is the public health equivalent of shooting your allies during battle.

In the real world, no country acting on its own can handle today's major emerging infectious disease events. They are too difficult, the global context is too complex and the infections are able to cross borders too easily.

In the past two decades, SARS, avian influenza, pandemic influenza H1N1, MERS, Ebola, Zika and Covid-19 have emerged unpredictably across the world -- in Asia, Africa, the Middle East and North America. Each has caused illness and death, confusion and fear, policy uncertainties and had severe social and economic consequences. While Covid-19 is the latest of such outbreaks, others will follow, and it is entirely possible that one of them could be caused by a pathogen that will be even more easily transmissible and more lethal than the virus causing Covid-19.

In an outbreak, getting information early is key to responding effectively. Countries need the earliest possible warning to mobilize their response. They also need basic facts about the epidemiology, the disease and the pathogen so they can assess risks and make sound decisions related to communications, diagnostics, medicines and clinical care and public health measures.

WHO is at the heart of the global system to obtain and assess such information and to provide it to every country as soon as possible. WHO gathers some information through electronic searches of media but, more notably, it obtains details and confirms what is factual by using formal channels with governments and by holding informal discussions with individuals. This approach can work very well, but only if countries do their part and willingly share important information with WHO.

This combined network and access, involving all of its member states, is unique to WHO and cannot be replicated by others. For example, despite recent criticisms, the US CDC is generally regarded as the best technical public health agency in the world. It has extensive international connections, a long history of supporting others, deep scientific and public health expertise and the respect of its peers. Nonetheless, the CDC represents the US, which limits its access to many countries. Since countries are sovereign, they can choose to work with, or ignore, other countries -- but find it difficult to ignore WHO.
Of course, WHO is neither omniscient nor infallible. For example, the organization has been accused of endorsing face mask use for Covid-19 too slowly and more recently, for not acknowledging the possibility that airborne transmission of SARS-CoV-2 may be important.

Such criticisms related to technical or scientific matters underscore a recurrent difficulty for WHO. On the one hand, it is expected to be a leader in providing new scientific information, but at the same time, it is expected to be a guarantor of scientific information that is considered widely credible and well-accepted. This role is especially important for less resourced countries. When scientific evidence and understanding is rapidly evolving, as is the case with the understanding of how SARS-CoV-2 is transmitted, WHO will often lean toward being conservative, which explains why it sometimes is perceived as acting too slowly.

Another criticism frequently leveled at WHO is related to the issue of its independence. For example, in the current situation, a widely shared dissatisfaction with China's response is the perception that the country shared critically important information on the earliest cases either too slowly or selectively. Ironically, this is similar to some perceptions during the early part of SARS in 2003. In that outbreak, some of the suspicions turned out to be true, such as SARS cases being hidden in Beijing, while other suspicions were not true, as the Shanghai mission found.

So, why hasn't WHO simply conducted an "independent" mission to address such concerns? There are two main reasons. Right now, the timing is wrong. Covid-19 shows little sign of going away soon and focusing on blunting its impact in the short term is the top priority. But, more fundamentally, WHO can only operate within a country with the host government's permission. Without such an invitation, WHO can no more march into China to investigate its Covid-19 response, than it can march into the US or any other country to conduct a similar assessment.

Nonetheless, at the right time, a thorough, objective and independent assessment of China's early response by a WHO-led team will be equally important for China and the international community. The impact of Covid-19 has been too great, the suspicions of information being held back are held by too many, and China and the world need to know whether major changes are required to do better the next time round.

The Trump administration's primary dissatisfaction with WHO, however, appears to be political in nature -- and centers around the accusation that the organization is biased toward China ("The W.H.O. really blew it. For some reason, funded largely by the United States, yet very China centric," Trump tweeted in April). Whatever the basis of such accusations, or whether they are simply a diversionary tactic to shift attention from the Trump administration's own failures, pulling out of WHO will not help people in the US or other countries.

To the contrary, when the value of WHO's non-emergency work is also considered, it is clear that the US walking away will undermine global efforts to improve the health of all people, including the strengthening of health systems, reducing chronic diseases and risk factors such as smoking and obesity, bolstering the health and nutritional status of children and mothers, completing the eradication of polio and improving the quality of vaccines and immunization efforts. While the WHO tends to receive more attention during large outbreaks, the majority of its work involves efforts to achieve the longer-term health priorities established by the World Health Assembly.

Recently, Director-General Tedros Adhanom Ghebreyesus appointed Helen Clark, the former Prime Minister of New Zealand, and Ellen Johnson Sirleaf, the former President of Liberia, to lead an assessment of the international response, including WHO's performance related to Covid-19. This is a good start, but the magnitude of Covid-19 deserves a deep dive.

That said, whatever shortcomings are identified, my decades of experience confirm that WHO's global presence is irreplaceable and essential for improving health globally. From the vantage point of both crisis management and achieving global health priorities, withholding support from the international body is neither right not smart.

The US should set the example that many of us hope for, and stand with its allies, which in the face of Covid-19 and other health challenges, includes WHO and every other country in the world.

Lichtsteiner finished his career. The former Juve and Arsenal defender is 36 years old
Matuidi left Juventus. The midfielder will move to Inter Miami Beckham
Goetze turned down Beckham's Inter. Mario wants to play in Europe
Tonali will move to Inter after the end of the Europa League
Gasperini worked at Juventus (only with youth) and Inter (sacked after 5 matches), but Atalanta became the grandee for him
Parejo and Coquelin has gone from Valencia to Villarreal
Coca: The win over Liverpool had a good impact on us. It is not easy to beat the European champion and the Premier League twice
Source https://edition.cnn.com/2020/07/16/opinions/world-health-organization-covid-19-trump-mistake-fukuda/index.html?utm_source=feedburner&utm_medium=feed&utm_campaign=Feed%3A+rss%2Fcnn_latest+%28RSS%3A+CNN+-+Most+Recent%29

Biden And Harris To Introduce Their Presidential Ticket In Delaware

2020 Masters to take place in November without fans

Election 2020: Biden and Harris to speak together in Delaware

She's a great grandma to 88 and she just turned 100. This is how they celebrated

Lizzo’s new Quay sunglasses are as glam as it gets

'Boomerang earthquakes' may mean one earthquake can strike twice

Meghan Markle pulled out of Pippa Middleton’s wedding 'at the last minute' for this reason, book claims

Liz Cheney calls Kamala Harris a 'radical,' says her voting record is to the left of Bernie Sanders

Georgia city votes to remove pavilion where slaves were sold

How An Artist, A Toy Maker, A College Student Use Their Skills To Fight The Pandemic

Damian Lillard: ‘Put some respect on my f—king name’

What Time Will ‘Selena + Chef’ Be on HBO Max?

Bryan Cranston opens up about coronavirus recovery, hanging out with Tom Hanks after symptoms subsided

Wyndham Championship: Who has the most wins?

Stream It Or Skip It: ‘Hard Knocks: Los Angeles’ On HBO, Documenting How The Rams And Chargers Are Training In The Year Of COVID

Trump and Meadows have made the COVID-19 economic crisis even worse: Can Mnuchin clean up the mess?

Stephen Colbert, James Corden and Jimmy Fallon head back to studios with caution

'One of our own.' Indians cheer Biden's pick of Kamala Harris as White House running mate

‘Diana’ musical will premiere on Netflix ahead of Broadway debut

Over 900 health care workers have died from coronavirus. A new database tells their stories

Rare megamouth shark sitting on ice block at the Smithsonian

Science and politics tied up in global race for a vaccine

The Benefits and Burdens of Kamala Harris

Fantasy football: If you must draft a kicker, here’s the correct strategy

Microsoft launching a giant, foldable phone that will cost $1,400

Advisers Consider Whether Trump Can Cut Taxes Without Congress

How to Delete TikTok

Hundreds of thousands without power days after Midwest storm

No roars at Augusta as Masters to be played without fans

‘Tough As Nails’ Renewed At CBS For Season 2

2020 Wyndham Championship: What to know about the event

Relive the '90s With a Sleepover at the World's Last Blockbuster