He wants to help scare you straight.

A British man who crashed while texting and lost his arm as a result of injuries sustained has allowed video of the incident to be released as a warning to others. 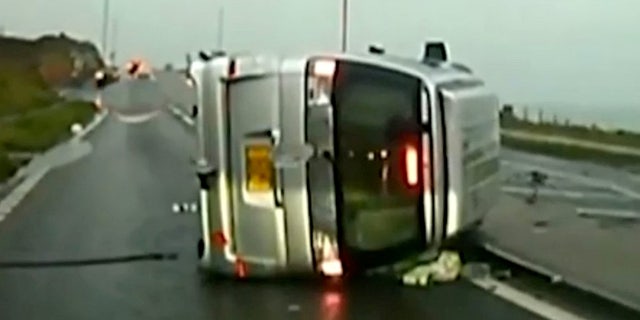 The driver, who remains anonymous, authorized the Sussex Police to post dashcam footage of the accident, which occurred in Brighton last November, as part of its ongoing road safety campaign.

In it, the silver van can be seen hitting the median of the seaside road and tipping onto its side onto the opposite, nearly hitting an oncoming car.

Details of the driver’s injuries were not revealed, but police said he needed to have his arm amputated. The footage was captured by a private motorist who agreed to its use, SWNS reported.

PEOPLE WHO DRIVE THIS CAR GET THE MOST SPEEDING TICKETS

Police are hopeful the video can be of good use by drawing attention to one of the “fatal five” offenses of speeding, driving under the influence, mobile phone use, not wearing a seatbelt and generally careless driving.

“The video being shared by Sussex Police is a shocking display of the consequences of dangerous driving and I am grateful to those that have agreed to share this,” police commissioner Katy Bourne said.

"It really enforces the fact that we all use the roads and must share the responsibility of ensuring the safety of ourselves and others.”

Barcelona are concerned about the shape of the Target. The club believes that he did not work enough on vacation
Laporte was supported by van Dyck: Sorry, bro. No joy, even though we are rivals
Lautaro Martinez: Messi is the best in the world. He is always one step ahead of the rest
The Atletico stadium was painted pink as part of the campaign to fight breast cancer
Frank Lampard: nothing comes easy in the Champions League. This is a great platform to learn new things
Ronaldo was not included in the Juve bid for the match against Dynamo Kyiv
Bruno on the role of captain: I didn't expect it. Tomorrow it's not about me, it's about the team. Everyone should be a leader
Source https://www.foxnews.com/auto/man-lost-arm-texting-driving-crash

Adam Gase is ‘doing everything he can’ to salvage Jets season

What’s Really Going on With Hunter Biden’s Hard Drive? Here’s Everything We Know.

Low-flying helicopters over DC assessing radiation ahead of inauguration

Elizabeth Hurley snuggles up in window sill as she takes a break from filming: ‘Cold weather is coming’

FX & ‘The Old Man’ Producers React To Jeff Bridges’ Lymphoma Diagnosis: “We Are All In This Together With You”

Polish gym declares itself a church to avoid coronavirus restrictions

Imminent vaccine could make all of Biden’s COVID promises irrelevant

The media ‘cover’ Joe Biden the way a protection racket does

US Poised to Sanction Iran After UN Arms Embargo Expires

Interpreting polls in Wisconsin and Pennsylvania.

Rays have one more giant foe to slay

The left’s favorite way to rebut foes: Silence them

States file their Covid-19 vaccine plans to CDC without plans to pay for them, officials say

Jets might end up the worst team in NFL history

Commission will mute mics during final debate between Trump and Biden

Testimony of Jeffrey Epstein's ex-madam can be made public, appeals court rules

The Encroachment of the Unsayable

Watch these nine states in the US election

Trump, Biden to have microphones muted for part of final U.S. presidential debate

Debate Commission says it will mute mics at final debate

Debate Commission To Mute Candidates' Mics At Start Of Each Segment

Democrats are cheering a Supreme Court ruling on mail-in ballots. Here’s why it’s worse than it looks.