Moderna asking US, European regulators to OK its virus shots

Moderna Inc. said it would ask U.S. and European regulators Monday to allow emergency use of its COVID-19 vaccine as new study results confirm the shots offer strong protection — ramping up the race to begin limited vaccinations as the coronavirus rampage worsens.

Multiple vaccine candidates must succeed for the world to stamp out the pandemic, which has been on the upswing in the U.S. and Europe. U.S. hospitals have been stretched to the limit as the nation has seen more than 160,000 new cases per day and more than 1,400 daily deaths. Since first emerging nearly a year ago in China, the virus has killed more than 1.4 million people worldwide.

Moderna is just behind Pfizer and its German partner BioNTech in seeking to begin vaccinations in the U.S. in December. British regulators also are assessing the Pfizer shot and another from AstraZeneca.

Moderna created its shots with the U.S. National Institutes of Health and already had a hint they were working, but said it got the final needed results over the weekend that suggest the vaccine is more than 94% effective.

Of 196 COVID-19 cases so far in its huge U.S. study, 185 were trial participants who received the placebo and 11 who got the real vaccine. The only people who got severely ill — 30 participants, including one who died — had received dummy shots, said Dr. Tal Zaks, the Cambridge, Massachusetts, company’s chief medical officer. 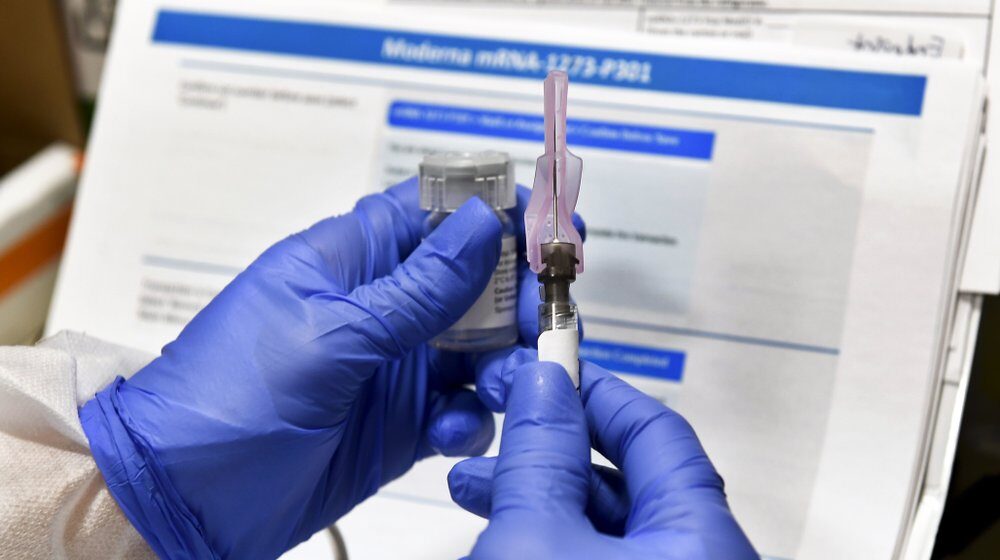 Nurse Kath Olmstead prepares a shot as the world’s biggest study of a possible COVID-19 vaccine, developed by the National Institutes of Health and Moderna Inc., gets underway Monday, July 27, 2020, in Binghamton, N.Y. (AP Photo/Hans Pennink)

When he learned the results, “I allowed myself to cry for the first time,” Zaks told The Associated Press. “We have already, just in the trial, have already saved lives. Just imagine the impact then multiplied to the people who can get this vaccine.”

Moderna said the shots’ effectiveness and a good safety record so far — with only temporary, flu-like side effects — mean they meet requirements set by the U.S. Food and Drug Administration for emergency use before the final-stage testing is complete. The European Medicines Agency, Europe’s version of FDA, has signaled it also is open to faster “conditional” clearance.

The FDA has pledged that before it decides to roll out any COVID-19 vaccines, its scientific advisers will publicly debate whether there’s enough evidence behind each candidate.

First up on Dec. 10, Pfizer and BioNTech will present data suggesting their vaccine candidate is 95% effective. Moderna said its turn at this “science court” is expected exactly a week later, on Dec. 17.

If the FDA allows emergency use, Moderna expects to have 20 million doses ready for the U.S. by year’s end. Recipients will need two doses, so that’s enough for 10 million people.

Pfizer expects to have 50 million doses globally in December. Half of them — or enough for 12.5 million people — are earmarked for the U.S.

Shipments are set to begin to states within 24 hours of FDA clearance. And this week, a different panel of U.S. experts, established by the Centers for Disease Control and Prevention, will meet to decide how those initial supplies will be given out. They’re expected to reserve scarce first doses for health care workers and, if the shots work well enough in the frail elderly, for residents of long-term care facilities. 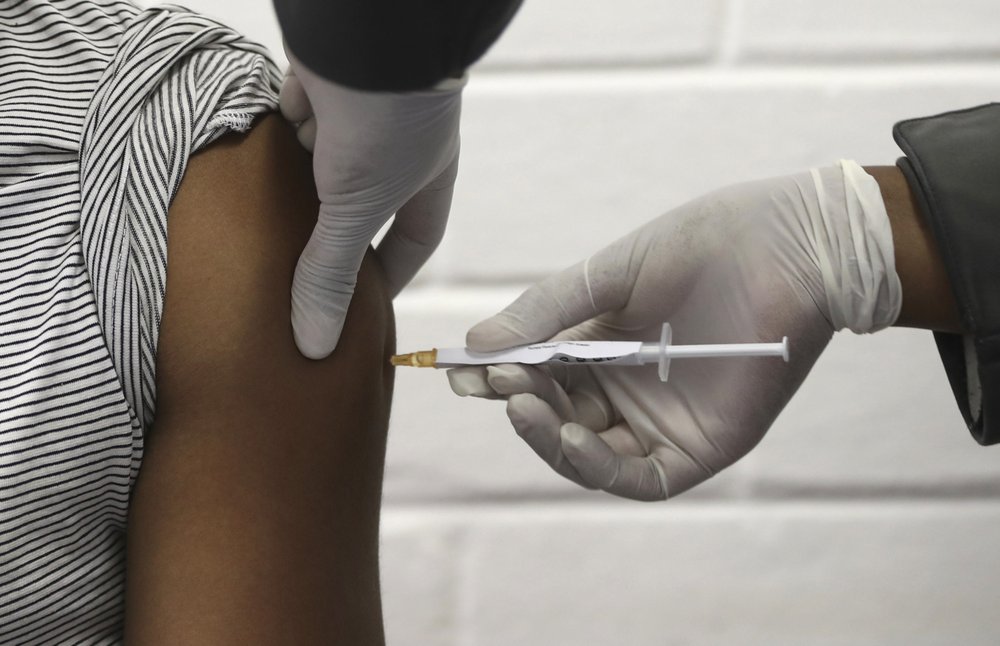 In this Wednesday, June 24, 2020 file photo, a volunteer receives an injection at the Chris Hani Baragwanath hospital in Soweto, Johannesburg, as part of Africa’s first participation in a COVID-19 vaccine trial developed at the University of Oxford in Britain in conjunction with the pharmaceutical company AstraZeneca. (Siphiwe Sibeko/Pool via AP)

As more vaccine gradually becomes available in coming months, other essential workers and people at highest risk from the coronavirus would get in line. But enough for the general U.S. population isn’t expected until at least spring.

Outside the U.S., Zaks said significant supplies from Moderna would be available later, “in the first quarter” of next year.

“Obviously we are doing everything in our power to increase the capacity and accelerate the timelines,” he said.

The U.K. also has ordered 40 million doses of the Pfizer-BioNTech vaccine, although it’s not clear how much of the companies’ limited December supply could go toward that order — if British health authorities clear the shots. Still, British hospitals are gearing up to receive some doses as early as next week.

Both Moderna’s and Pfizer’s vaccines are made with the same technology, using a piece of genetic code for the “spike” protein that studs the virus. That messenger RNA, or mRNA, instructs the body to make some harmless spike protein, training immune cells to recognize it if the real virus eventually comes along.

AstraZeneca and Oxford University last week announced confusing early results of their vaccine candidate from research in Britain and Brazil.

That vaccine appears 62% effective when tested as originally intended, with recipients given two full doses. But because of a manufacturing error, a small number of volunteers got a lower first dose — and AstraZeneca said in that group, the vaccine appeared to be 90% effective. 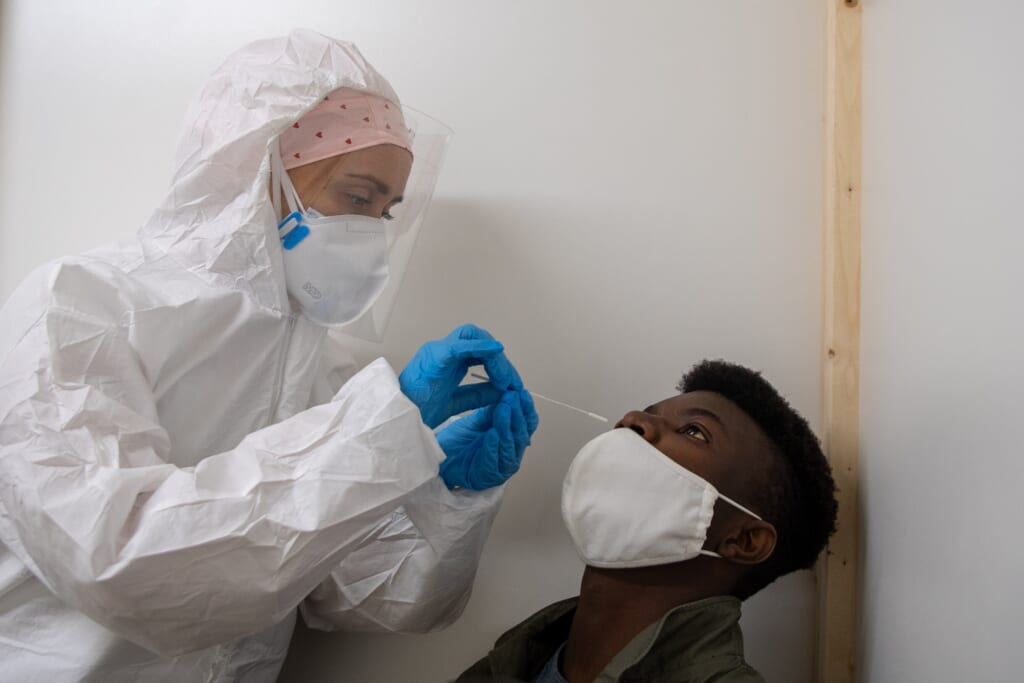 A man is tested for Covid-19 in the basement of the University Hospital of Charleroi on November 5, 2020 in Charleroi, Belgium. (Photo by Jean-Christophe Guillaume/Getty Images)

Experts say it’s unclear why the lower-dose approach would work better and that it may just be a statistical quirk.

A larger U.S. study of the AstraZeneca candidate still is underway that should eventually give the FDA a better picture of how well it works. The FDA has said any COVID-19 vaccine would have to be at least 50% effective.

Meanwhile Britain’s government will have to decide whether its U.K. data is sufficient for an early rollout there.

STILL IN THE PIPELINE

Johnson & Johnson also is in final-stage testing in the U.S. and several other countries to see if its vaccine candidate could work with just one dose.

Read More: Fauci: US may see ‘surge upon surge’ of virus in weeks ahead

Both the J&J and AstraZeneca vaccines work by using harmless cold viruses to carry the spike protein gene into the body and prime the immune system.

The different technologies have ramifications for how easily different vaccines could be distributed globally. The AstraZeneca shots won’t require freezer storage like the Pfizer and Moderna vaccines.

Candidates made with still other technologies are in late-stage testing, too. Another U.S. company, Novavax Inc., announced Monday that it has finished enrolling 15,000 people in a late-stage study in Britain and plans to begin recruiting even more volunteers for final testing in the U.S. and Mexico “in the coming weeks.”

Vaccines made by three Chinese companies and a Russian candidate also are being tested in thousands of people in countries around the world.

The Associated Press Health and Science Department receives support from the Howard Hughes Medical Institute’s Department of Science Education. The AP is solely responsible for all content.

Messi is in Barca's bid for the Cup game with Rayo Vallecano. Dest will not play due to muscle problems
Gerrard on Lampard's resignation: Chelsea have a history in this matter, so no surprises
Golovin about the nickname Tsar: Nothing more than a joke. This is necessary for the media and fans, but I am a football player
David De Gea: I try to be a leader for Manchester United. I have the experience of winning big titles here
It feels like we've been working together for 10 years! Chelsea stars say goodbye to Lampard
Bayern Munich have signed former Basel striker Oberlen
Tuchel will sign a contract with Chelsea for 1.5 years (David Ornstein)
Source https://thegrio.com/2020/11/30/moderna-us-european-regulators-ok-virus-shots/

What the Biden administration means for the future of Silicon Valley

Anthony Fauci reportedly the highest paid federal employee in the US

Italian Prime Minister tenders resignation, in a tactical move amid the coronavirus crisis

Daywatch: Where to get the COVID-19 vaccine, feds investigating Pritzker EPA and Hinsdale South grad at center of ‘Bachelor’ drama

The Covid Fight Gets More Challenging

Say Yes to These 13 Secrets About The Wedding Planner

Leslie Jordan Asks How Y'all Doing? in Cover Reveal for His New Book

In U.K., Concern Grows Over Vaccine Hesitancy Among Minority Groups

On Key Biden Priorities, There is Room for Bipartisan Agreement, Experts Say

ND looks to knock off No. 20 Virginia Tech

As Borders Tighten Worldwide, Brazil-Based Variant Is Found in U.S.

Now with a title, second gentleman Doug Emhoff has to carve out role for himself

Football Coach Joe Kennedy: A prayer sidelined me – here's why I'm still fighting to get back in the game

Help! My Wife Spent Our Entire Life Savings in the Last Three Months.

What to Do If Your Stimulus Check is Lost, Stolen or Destroyed

Yes, You Can Get Guy Fieri's Trash Can Nachos Delivered for the Super Bowl

Why a lake in Serbia is blanketed in garbage every winter

Dear Care and Feeding: My Husband Is Brutally Hard on Our 8-Year-Old About Basketball

How Democrats Can Keep Their Policies Safe From This Supreme Court

Why swearing is a sign of intelligence, helps manage pain and more

Dogs likely migrated to the Americas with humans over 15,000 years ago, study says

Mask Fights and a ‘Mob Mentality’: What Flight Attendants Faced Over the Last Year

Relative of virus victim asks to meet WHO experts in Wuhan

China is rehearsing for when it overtakes America

What do coronavirus variants mean for your masks?