NASCAR is waiting out the weather in Texas as it tries to restart the Autotrader EchoPark 500 that was red-flagged on Sunday after 53 laps due to rain.

The Cup Series playoff race, which was expected to resume at 10 a.m. Monday, has been delayed until later in the day, at the earliest, as rain continues in the area around the Texas Motor Speedway in Fort Worth. 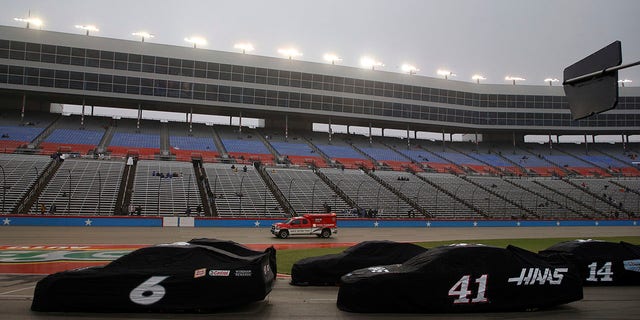 NASCAR is hoping to find a window that’s long enough to complete at least half of the scheduled 334 laps to make it an official race. However, with the forecast calling for wet conditions through Wednesday, the series is now faced with the prospect of having to postpone the race until next week so that the teams can get to Martinsville in time for Sunday’s Xfinity 500 at Martinsville Speedway in Virginia, which is the last event before the season finale in Phoenix on Nov. 8.

“NASCAR likely will do everything possible to get the race in at Texas without having to return next week prior to the scheduled Nov. 8 championship race at Phoenix. Depending on the logistics and the amount of broadcasting and officiating equipment at Texas that was planned to be used for Martinsville this coming weekend, NASCAR potentially could alter its Martinsville schedule,” Fox Sports NASCAR reporter Bob Pockrass told Fox News Autos.

“The current Martinsville schedule is trucks on Friday, Xfinity on Saturday and Cup on Sunday. Martinsville is allowed to have only 1,000 fans each day, which could impact NASCAR's decision.”

NASCAR has modified its schedule several times this season in response to issues posed by the coronavirus pandemic, and has held several Wednesday night races between Sunday events.

Clint Bowyer was in first place at Texas when the race was suspended, ahead of Jimmie Johnson and Erik Jones, while championship contenders Joey Logano, Martin Truex Jr. and Chase Elliott will take the restart in fourth through sixth positions.

Juventus for the first time in the 123-year history of the club played without the Italians in defense and goal
Koeman on 4:0 with Dynamo Kyiv: Today was the Barcelona we want to see
Holand continues to insist that he is a monster. Fastest in the history of the Champions League scored 15 goals (and added 16)
Koeman on the victory over Dynamo Kyiv: We achieved our goal-we reached the playoffs
Solskjaer on 4:1 with Istanbul: Manchester United played intensely, enjoyed the match. We want to be 1st in the group
Forward Ferencvaros Troll Cristiano: celebrated a goal in his style. Ronaldo responded with a goal and a very angry look
Morata scored 5 goals in 4 games in the Champions League for Juve. His best result is 5 in 12 games in the 2014-15 season
Source https://www.foxnews.com/auto/nascars-texas-cup-series-playoff-race-delayed-rain

Joe Biden Says the U.S. Will Lead on Climate. But First He Has to Regain World Leaders’ Trust

Trump carries on a fight everyone else is abandoning

Who Will Get The First 6.4 Million Doses Of COVID-19 Vaccine?

This best-selling electric toothbrush has over 30,000 ratings on Amazon — and it's 40 percent off