Boxer Nate Robinson completely stole the show in his professional-debut bout that was the undercard for Saturday night’s highly-anticipated fight between Mike Tyson and Roy Jones Jr. at the Staples Center.

But it wasn’t in a good way. 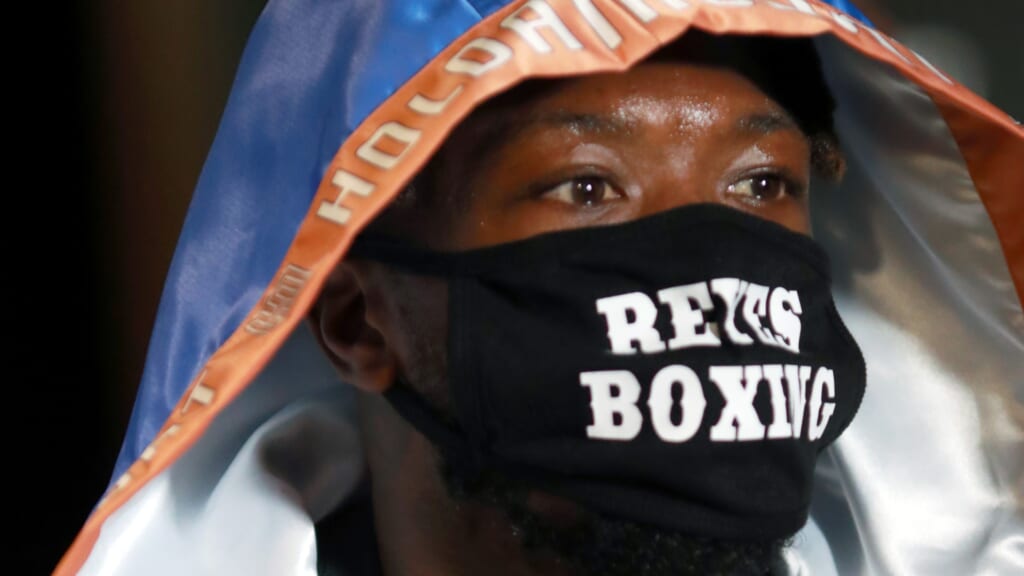 Nate Robinson walks towards the ring — and his eventual knockout by Jake Paul — at the Staples Center Saturday night in Los Angeles. (Photo by Joe Scarnici/Getty Images for Triller)

Robinson was knocked to the mat three times by Jake Paul, including a brutal final knockout that made the former NBA player a trending topic over the weekend.

He poked fun at himself on Instagram Sunday by posting a clip from the ’90s classic film, Friday.

In the clip, Pops confronts Craig for carrying a gun and tells him, “Kids today are nothing but punks. Sissified. So quick to pick up a gun. You scared to take an ass-whipping.”

“This is what makes you a man,” the late John Witherspoon, as Pops, says in the scene, lifting his fists in a serious moment with Ice Cube, who’s playing his son. “When I was growing up, this was all the protection we needed. You win some, you lose some, but you live. You live to fight another day.”

Robinson wrote: “Put that gun down son, get knocked out like your father used to. Great souls are grown through storms of struggles and seasons of suffering.”

When the eight-team veteran had declared earlier that he was “fighting for my brothers in the NBA, athletes across the world, and most importantly my children,” his former Golden State Warriors teammate, Steph Curry, retweeted his message in support.

“Let’s go @nate_robinson. Hold it down,” wrote Curry. Robinson said in response he was “Gonna shock the world bro.”

Late Saturday night, after the final knockout, Curry replied: “I see no lies.”

He did, however, get some words of encouragement.

“Yo @nate_robinson stay strong my brother. That could’ve happened to anyone. I respect the fact that you stepped up and took a chance. Maximum respect my brother!!!!,” wrote LL Cool J.

“Nate, I’m proud of you and I will always stand behind all my brothers,” Mayweather wrote on Instagram. “I will never kick my brother when he’s down. It’s ok for people to voice their opinions on social media, but no black athletes or black entertainers, especially black NBA players should make a mockery out of you. We are supposed to all stand with each other through the good, bad, and ugly. I’m here to uplift you and let you know we all love you and congratulate you for just making an effort.”

Klopp on Liverpool's form: It is absolutely normal that such questions are asked. This level of pressure is a privilege
In the clinic, the salary is 25 thousand. This is a disaster. Doctor Shinnik's vacation: for 6 hours a day, he drove doctors to patients so that they did not walk
The Real Madrid management trusts Zidane and will give him time to correct the situation (Goal)
Milan defender Conti has moved to Parma on loan with a mandatory buyout for 7 million euros
UEFA on the Euro in one country: Each city will have its own scenario
FIFA and UEFA will ban Super League clubs from participating in tournaments under their own auspices
Mikel Arteta: Ozil has done a lot for Arsenal, but I want to steer the team in a different direction
Source https://thegrio.com/2020/11/30/nate-robinson-friday-response/

Man accused of beating officers in D.C. riot: "I'm not here for Trump"

Fauci lays out US support for WHO under Biden administration

Germany’s Merkel stands by Russia pipeline that US opposes

In a Turnaround, British Stocks Are a ‘Favorite’ of Investors: Live Business Updates

Biden Rolls Back the Trump Legacy

FIFA unites with UEFA to warn clubs against breakaway league

China locks down millions in race to contain a COVID surge

Proud Boys organizer arrested in Florida over riot at Capitol

Poco sold over 10 lakh C3 smartphones in India; see what makes it so popular

No beaches or booze: What South Africa's top tourist spot looks like during Covid

'2021 should end now. This is a nightmare.' Real Madrid humiliated by third-division side Alcoyano

Not just Earth, Dinosaur remains can be found on Moon and Mars | Details inside

Bernie Sanders Is Once Again the Star of a Meme

The people who saved America's democracy

Fauci underscores Biden's commitment to WHO and its COVID fight

In a Turnaround, British Stocks Are a ‘Favorite’ of Investors

Buttigieg to testify for transportation secretary post at confirmation hearing

Column: Wearing pearls in honor of Kamala Harris, my mother and hope for a new day

A Rush to Reverse Much of Trump’s Legacy

'Significant' cannabis factory found near the Bank of England

New Yorkers at the Inauguration Festivities

Help! My Girlfriend Likes Role-Playing as My Grandma.

Ask a Teacher: I Have a Horrible Choice to Make About My Son, My Mom, and COVID

BBC Survey Seeks Opinion of Netflix and Sky, Asks if License Fee is Value For Money

Sushant Singh Rajput, the timeless star: Remembering the actor on his birth anniversary

Biden puts forth virus strategy, requires mask use to travel

Conor McGregor is one of the best at 'getting under your skin,' says Dustin Poirier

Conor McGregor is back, again.