The first fact we learn about Craig Melvin in the NBC News anchor’s new memoir “Pops” is that his father was born in a federal prison in West Virginia.

The revelation grabs the reader by the collar and will likely surprise viewers who watch Melvin, 42, a smooth broadcaster who never displays a hint of angst over the many hours each week he’s seen across NBC News properties. Since joining the network in 2011, he’s become the news division’s iron man, seen daily on “Today,” MSNBC and the syndicated edition of “Dateline.”

Melvin’s story is not your typical Father’s Day journey down memory lane. His career ascent required him to navigate around the travails of his father, Lawrence Melvin, a post office employee who never missed a day of work but whose addiction to alcohol and gambling often put his family’s livelihood at risk.

For years, Melvin wrote off his father as a drunk before fully understanding that alcoholism is a disease. Years of therapy — and working on stories about addiction — led him to understand he could get his father help and resolve his own issues over his turbulent upbringing in Columbia, S.C..

Melvin has two children with wife Lindsay Czarniak, a reporter and host for Fox Sports. He has become the resident fatherhood expert at “Today” with an occasional segment called “Dad’s Got This.” Exploring the troubled relationship with his father — now 70, in recovery and healthy — was not something he relished, especially because it required him to reveal his vulnerabilities.

“I’ve only done it to help myself heal, to help my father heal but to hopefully help people who read this in myriad ways,” he said in a recent phone interview.

Here’s more of what Melvin shared about “Pops: Learning to Be a Son and a Father,” his first book, and being a Black father in 2021.

It’s not easy to sit down and talk to a parent about these issues under any circumstance. Did having your journalism armor on make it easier?

That was the only way I was able to do it. I had to take off my son hat and put on my journalism hat. I tried desperately not to approach it as a book about just my father. When I started, the idea was to write this book that celebrated fatherhood and to use some of my complicated relationship with my dad to help tell that story. I came to realize that it was going to be more of a story about my dad and I than I initially set out to write because millions of people in this country are struggling mightily with addiction and we don’t really talk about it. We don’t talk about how a parent’s addiction affects a child 30 years later in some ways and the children don’t even realize it because they never stopped to think about it. My perspective until three years ago was, “Dad’s a bum, Dad’s a drunk and he decided to cut himself off from society and the family and that’s his choice.” 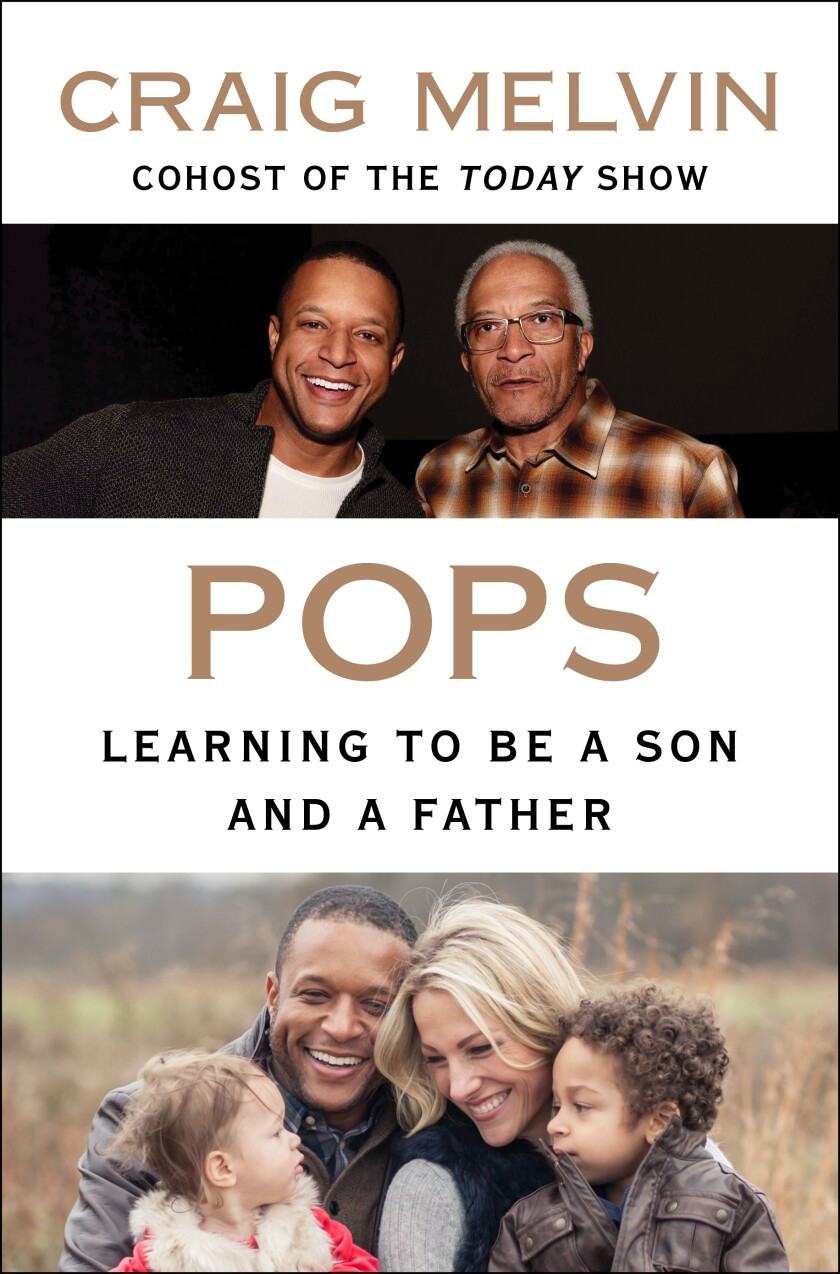 Did he get angry or frustrated during the interview process?

Not only did he not get angry — it was as if he was waiting for someone to come along and say “hey Pops, let’s get the pen to paper. Give me all of it.” He answered every question and every follow-up and a lot of it was uncomfortable for him. But he didn’t shy away from it and I was pleasantly surprised by that. The part that he struggled with the most was being the child of a woman who went to prison. He was born in prison. We talked about how that shaped him and molded him; I can hear the sadness in his voice. I think he was sad because he just never talked about it. It wasn’t addressed. Back then you didn’t talk about things like that especially in Black families in the South; there were a lot of questions that did not get asked and that was at the top of the list. That always bothered him.

Did writing this book make you see that life could have gone either way for you?

I would contend this was the least probable path, all things considered. That’s where my mom comes in. I know the book is called “Pops,” but it is also a story of this woman who had remarkable faith in us. There are things we didn’t appreciate at the time the way we do now. My mother knew all of our friends, she knew their parents. For the better part of my life, she was playing the role of mother and father — she carried the family emotionally, financially, mentally and spiritually. That’s how I ended up where I am now. My father would admit this. He had very little to do with our success. My mother figured early on that if my father wasn’t going to be present, she was going to have to be three times as present as any mother probably should be. At the time it was like — “Oh God really, you want me to compete in an oratorical contest, you want me to play the violin, you want me to do all of these things the white kids are doing?” And then you get older it’s like — “Oh, now it makes sense.” At the time, it was like growing up in a Stalinist regime.

Your father’s green 1973 Pontiac LeMansis practically a character in this book. Was it a symbol of aspiration for him?

Back in the early ‘70s, it was. He had the ‘fro, the butterfly collar, the polyester pants. He oozed cool. Even when I was a little boy, that was how he presented to the world. It wasn’t until the late ‘80s, early ‘90s when the drinking picked up and the gambling started in earnest, he didn’t look as cool as he used to. And that’s when the car fell into disrepair, which unfortunately became an apt metaphor for his life. When we were growing up, the sun rose and set with that car. It was his fourth child. When he stopped caring about the upkeep of the car, it became obvious to us that he stopped caring in general.

Have you bought him a new car?

I have offered to buy my father a new car. This has gone on for years. Now it’s become a matter of principle. Right now he [drives] a Honda Civic that belonged to my grandmother. He hasn’t bought a new car since 1973.

Over the past year, you’ve been immersed in the coverage of social justice following the police murder of George Floyd. As a dad, have you thought about the conversations you’re going to have with your kids about policing and being Black in this country?

Absolutely. And my wife has talked about this a lot over the past year. Probably in the not too distant future, we’re going to have to have a conversation with our 7-year-old. Lindsay and I, like a lot of folks, lulled ourselves into this idea that we were living in a post-racial America. It became obvious, I would contend before George Floyd was murdered, that race still matters. It matters a lot.

Is it more complicated to address in a biracial household like yours?

It’s become that. Our son looks more like me in terms of skin tone and our daughter looks like my wife (who is white). My daughter could pass for white and my son looks like a young black kid. What we’ve tried to start doing is celebrate the richness of their diversity. For my kids, diversity isn’t going to be this sort of foreign concept. It’s what they live. And they’ve already started to come to terms with what that’s going to mean.

If I had my druthers, it would be me being able to sleep in uninterrupted. Going for a nice jog. Maybe taking a nap. Having a cigar and a little glass of bourbon. Watching a game. And having some quiet. That’s what I ask for every year. What I usually get is a day packed full of activities — activities that my children want to do. I realized a few years ago that Father’s Day is pretty like the [other] 364 days on the calendar. It’s not about you, it’s about the children and whatever they want to do. They’ll make a card, they’ll say happy Father’s Day and I’ll be at their beck and call. But you know what, it’s not bad.

Resignations are on the rise, but there’s a right way to walk out the door

The Olympic move that was never supposed to happen

Tokyo Olympics: Schedule for the most anticipated events

Tom Barrack and the influence he had in Trump's world

Telehealth leapt forward with COVID-19. Who was left behind?

Will Pence primary Trump — and win?

How bad is space tourism for the environment? And other space travel questions, answered.

Who Could Replace Meghan On ‘The View?’ Some Possible Candidates Guarantee More Drama

Why Energy Concerns Around Blockchain May Be a Misconception

Sue Bird, WNBA colleagues to stay on court for anthem at Olympics: 'I don't feel like a hypocrite in any way'

‘Out of my body’: Osaka sharp in debut at Tokyo Olympics

DeChambeau, Rahm out of Olympics after positive COVID tests

Trump's impact on the line in Texas special election

Dear Care and Feeding: My Child Wants to Call Themself a New Name. Do I Have to Accept It?

The test of will on infrastructure

Pizza for Italy and Dracula for Romania. South Korean broadcaster apologizes for its Olympic 'inexcusable mistake'

There is no life after death, physics has already ruled out possibility: Brian Cox

The opposite of distancing; rugby 7s set for kickoff

Why empty offices aren't being turned into housing, despite lengthy vacancies

Stop Insulting Trump Voters and Their Concerns. Instead, Shut Up and Take It.

Sunday On The Beach With Sierra Leonean Soccer Players

Grassley pressured to run as Democrats set sights on Iowa

These Olympic Athletes Raising Adorable Kids Will Win You Over

Lloyd navigates her 4th Olympics for the US women’s team

EXPLAINER: How team of refugee athletes made it to Olympics

Yankees continue to be impressed by Estevan Florial