When Dharyl Auguste was 3 years old, he and his parents packed all of their belongings and left their home in Port-au-Prince, Haiti, to immigrate to the United States.

The family settled initially in Fort Lauderdale, Fla., before moving to nearby Sunrise. When it was time for Mr. Auguste to attend middle school, he and his parents relocated again, this time to Plantation, Fla. Mr. Auguste welcomed the move, he said, because it was easier for him to see his friends and access public transportation.

But something was not right in Plantation.

“It often came up as a topic between me and friends, and we all had the same feeling that it’s not a welcoming name,” Mr. Auguste, 27, said.

In the weeks since the George Floyd protests began, neighborhoods and subdivisions across the country have removed the word “plantation” from their names. In June, Rhode Island — known formally as the State of Rhode Island and Providence Plantations — announced that it would drop the second half of its official name from state documents and websites. (State lawmakers have introduced legislation that would put a name-change referendum on the ballot in November.)

Inspired by the social unrest spurred by the death of Mr. Floyd, a Black man who died after a Minneapolis police officer pinned him to the ground by the neck for more than eight minutes, Mr. Auguste started a petition to change the name of Plantation. 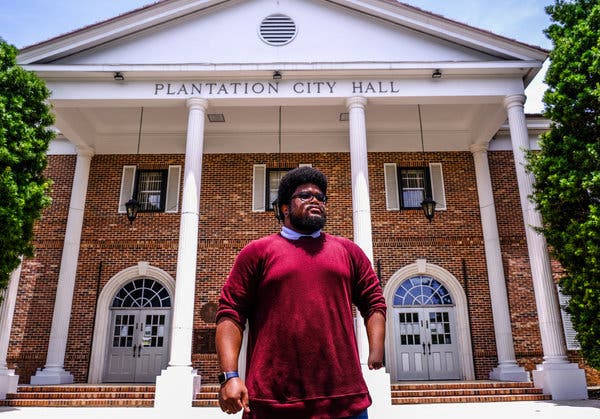 Dharyl Auguste outside Plantation City Hall on Thursday. At a recent City Council meeting, Mr. Auguste argued that tradition was not reason enough to keep the city’s name.Credit...Maria Alejandra Cardona for The New York Times

“I was at home sitting in awe as our nation was going through a social awakening,” he said in an interview this week. According to Mr. Auguste, images of toppled monuments to slaveholders and Confederate generals fueled him to take action. The petition he created on June 7 has now been signed more than 11,000 times.

Strictly speaking, the word “plantation” refers to a large group of plants or trees in a settlement. But the association with slavery is inescapable.

Gabriela Koster, who moved to Plantation, Fla., in 2006, agrees.

“I have been saying for 15 years that I do not think it’s an appropriate name for our city,” Ms. Koster said. “I don’t think it serves us well.”

Ms. Koster, 42, who raised her three children in Plantation, described the city as vibrant but said its name dulled some of the city’s luster.

But Lynn Stoner, the mayor of Plantation, does not necessarily share this opinion.

“If we change the name, it doesn’t change the mind-set of what people indicate the problem is,” Ms. Stoner said. “I think it is just the optics.”

Ms. Stoner has lived in Plantation for 50 years, and she proposed instead that residents be educated on the “racial components and diversity in the community.”

“I’m more about the education piece,” Ms. Stoner said at a City Council meeting on July 1, during which she also suggested that residents be taught about what should be considered offensive and why. “I feel like changing the name doesn’t change the philosophies — I think that’s where the bigger issue is.”

At the meeting, Ms. Stoner criticized an interview that Mr. Auguste had recently given on CNN, saying that “he didn’t do real well.” (She later apologized.) She also asked Mr. Auguste during the meeting whether she should use the term “African-Americans” or “Blacks”; claimed that the first time she “ever really saw” Black people was when she moved to Plantation; and said that the last three people she had hired were not white.

She added that she was taught to treat everyone equally.

“I’m sure that was the same mentality when slavery was ended,” Mr. Auguste said. “We have to be more than not racist — we have to be antiracist.”

Because the City of Plantation wasn’t incorporated until 1953, many — including Ms. Stoner — believe that its name is exempt from the correlation with slavery.

“This isn’t just about Black people,” the mayor said in an interview on Tuesday. “It is about how Black people and people from other countries all relate to each other.”

“I have been saying for 15 years that I do not think it’s an appropriate name for our city,” said Gabriela Koster, who raised three children in Plantation, Fla.Credit...Maria Alejandra Cardona for The New York Times

Across the country, people are working to change the names of neighborhoods, developments and subdivisions that include the word “plantation.” In Hilton Head, S.C., efforts to change the names of gated communities and resorts are unequivocally about Black people. Beaufort County, which includes the island of Hilton Head, was founded in 1711. Before the Civil War, there were more than 20 plantations on the island where slave labor produced cotton, indigo, sugar cane, rice and other crops, according to the local government.

Today, Hilton Head is a resort town with developments and gated communities whose names often have the word “plantation” in them.

“It has been co-opted to mean a gated community in the area,” said Marisa Wojcikiewicz, who started a petition last month to change the names of the resorts and gated communities. “It is very strange, to say the least, considering that the island is inextricably linked to the plantation economy.”

Peter Kristian, general manager of the Hilton Head Plantation property owners’ association, did not respond to requests for comment on Friday.

In Plantation, Fla., Mr. Auguste has two options to get the city to change its name. The City Council can vote to have a referendum added to the November ballot for the name change or Mr. Auguste can go door to door to collect signatures from at least 10 percent of the city’s 94,000 residents, which would compel a City Council review. In Hilton Head, because the developments and resorts are privately owned, the onus is on the owners and investors to make any name changes.

Most people don’t want to be told that something they are doing is wrong, according to Ms. Wojcikiewicz, particularly when they have never given any thought to how it might be hurtful.

“Many people are afraid to admit that they were blind to the fact that it is racist,” she said. “They think a plantation is this beautiful, expansive, green, calm, Southern idyllic life that everyone wishes they could have. We have deluded ourselves.”

Cartoon: Art of the Executive Order

Chris Wallace: Congress stalling on coronavirus stimulus is a ‘pox on both their houses’

Facebook, Twitter and Google failed to protect the 2016 election. Now they want to prove they've learned their lesson

Explainer: How the Coronavirus Changed US Political Conventions, Perhaps Forever

Remote learning is spectacularly remote when you're superrich

Daywatch: Protesters turned away from Lightfoot’s block, state senator charged with tax evasion, and why millennials may be leaving Chicago

Bernie Kerik blasts NYC Mayor de Blasio: People are moving out 'because they're scared to death'

Abbreviated Pundit Roundup: The new reality, as the general election starts in earnest

Spanish GP: Bottas fastest ahead of Hamilton in 1st practice

When will new unemployment benefits start flowing? It may take a while

With major delays in Covid-19 testing, AMA and other medical groups push for testing priority guidelines

They do weddings for multicultural brides. COVID-19 is disrupting their plans.

Tim Tebow: Human trafficking is intolerable – It's time to say, 'Not On Our Watch'

On China, Biden may have little choice but to continue Trump's hard-line policy

These 5 new Detroit restaurants still plan to open this fall

A police officer killed my father 27 years ago and went unpunished. It changed my life forever.

More than half a century before Kamala Harris ran for Vice President, this Black woman did

Are We Ready to Bring Some Basic Decency Back Into Politics?

'China's Netflix' is being investigated by the SEC for alleged fraud

'China's Netflix' being investigated for fraud

Music is big on Twitch. Now record labels want it to pay up

UK removes France from its list of 'safe' destinations

Greek FM heads for Vienna talks amid standoff with Turkey

No shortfall in U.S. supply of ventilators as GM, Ventec end contract

It's time for Democrats to go big

Masks are on superintendents' back-to-school shopping lists. Some leaders wonder if there will be enough.

Detroit Tigers have 17-game losing streak against Indians: 'I hope we kick their butts'

Markets rise as economy struggles; 'It does not make sense'

'Why am I not doing more?': Detroit Lions coach has plan to create positive change in metro

Donald Trump Gets A Withering Reminder After ‘Guided By Science’ Claim